When someone tells you that something is “hidden,” usually all it does is make you want to find it.

That was exactly the case when I read about Urban Adventures' “Hidden Istanbul” walking tour for the first time. What were the “hidden” parts, I wondered? And how could I discover them?

And so, on my first morning in Istanbul — roughly an hour after getting off an overnight bus from Bulgaria, in fact — I set off to uncover those “hidden” things about this diverse and history-filled city. 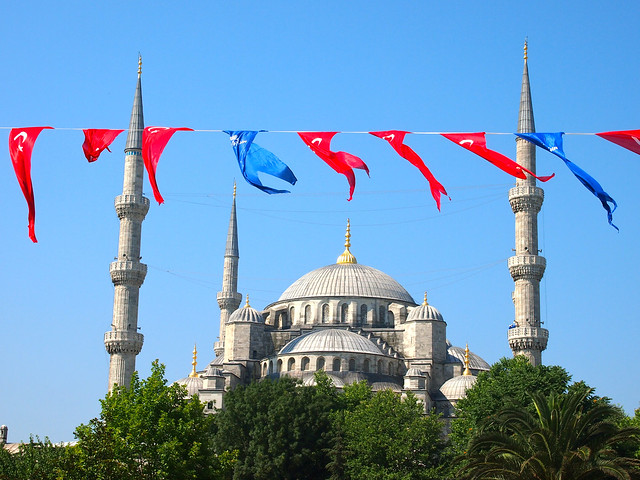 The tour (now known as the “Istanbul Uncovered” tour) kicked off at 8:30 a.m. in the Sultanahmet neighborhood of Istanbul, not far from the famous Hagia Sophia and Blue Mosque. This tour, my guide Suleyman told me, would introduce me to some of Istanbul's most-loved sites and best-kept secrets — but we would start with the best-loved sites.

Our first stop was the site of the Hippodrome of Constantinople — the Roman circus that served as the sporting and social center of the capital of the Byzantine Empire. My jaw dropped as we stopped in front of the pink-hued Obelisk of Theodosius and Suleyman began telling me about how the Roman emperor Theodosius I had it brought to the city in the year 390 AD — but that it was actually originally part of the Temple of Karnak in Luxor, having been erected there by the Pharaoh Tutmoses III around 1490 BC. 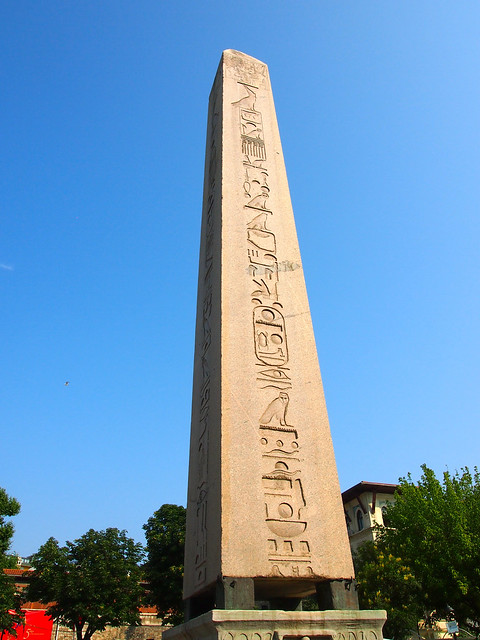 It was the first of many awe-struck moments for me as I fully realized for the first time how much history the city of Istanbul has seen.

From the Hippodrome, we next headed for the famous Sultan Ahmed Mosque — AKA the Blue Mosque. The mosque, which was built in the early 1600s during the rule of Sultan Ahmed I, is known for being one of the biggest and most beautiful in Turkey. 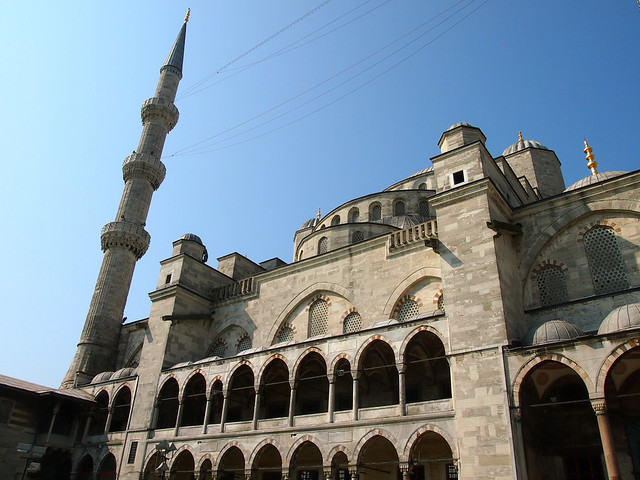 And, with its 6 minarets, 8 domes, and intricate Iznik tile work on the inside, the Blue Mosque IS stunning. 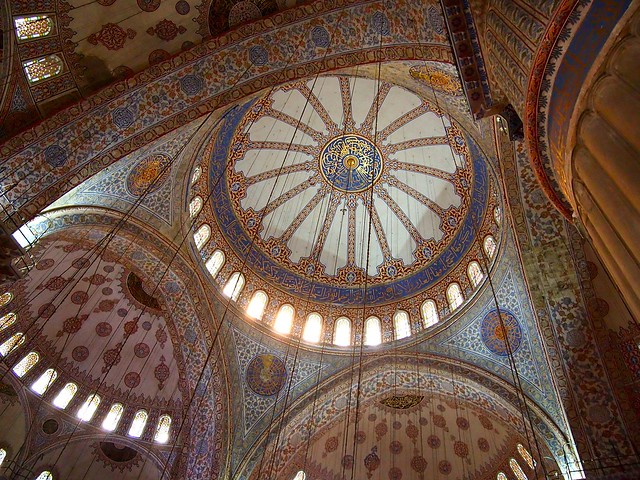 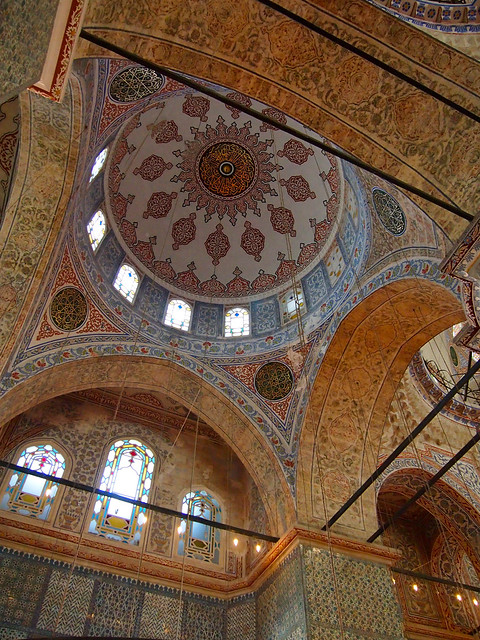 But it is also the top tourist destination in Istanbul.

Even though we arrived around 9 a.m., we still had to wait in line nearly half an hour to enter the Blue Mosque. Once inside, the place was so crowded that I didn't feel as though I had enough time or space to truly soak it in.

After all, this is a holy place for a religion that I am a stranger to — I had hoped to be able to understand it better by visiting the Blue Mosque. But instead, I just felt like I was being herded through an amusement park line that required me to take my shoes off. 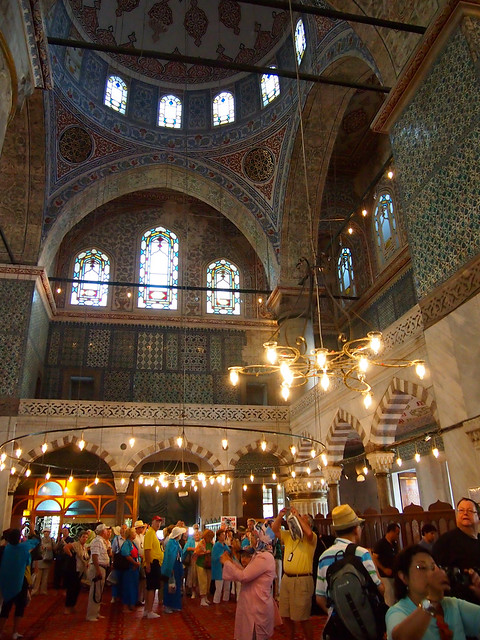 After extracting ourselves from the Blue Mosque, it was time for more chaos at the Grand Bazaar. This covered market, consisting of about 60 different streets and thousands of shops, is one of the oldest and largest markets of its kind in the world. There are a number of different entrances to the bazaar, making it incredibly easy to get lost inside.

We were quickly in one side and out the other just to get a taste, but I knew it would be a place I would return to (which I did). Here, the crowds didn't bother me quite so much. 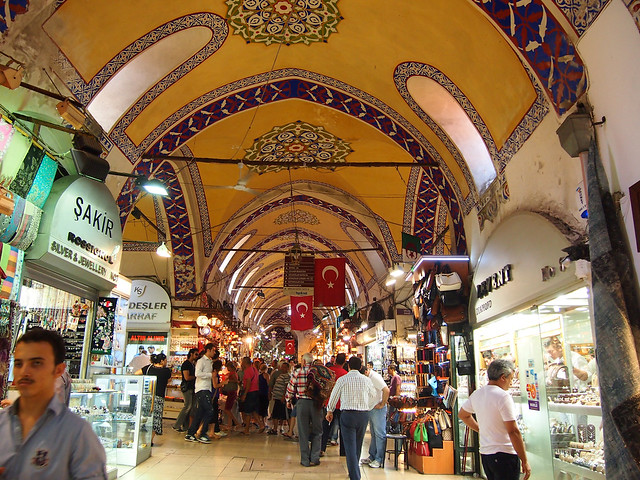 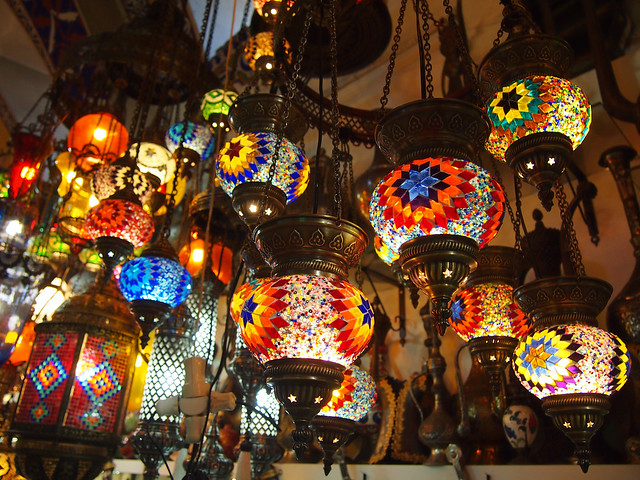 Thankfully, our next stops took us away from the crowds. We walked past the quiet campus of Istanbul University, stopping at a small cemetery to sit for a while in the shade when I got too hot. Suleyman, a recent university graduate himself, chatted with me about life in Istanbul, the traveling he'd like to do once he completes his mandatory military service, and what it was like to be a tour guide in such a fascinating city.

By the time we reached the next mosque we would be entering, I had all but forgotten about the sour taste the Blue Mosque had left in my mouth. 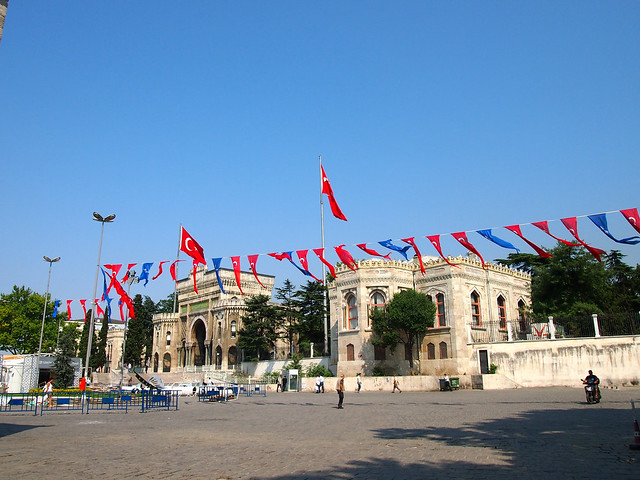 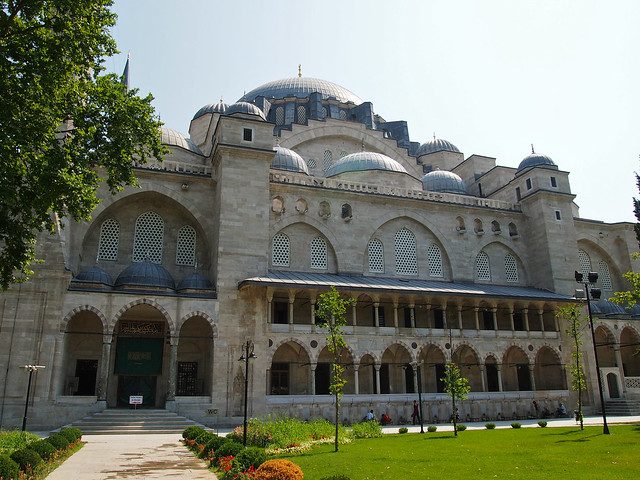 The Süleymaniye Mosque is beautiful. I was immediately struck by the symmetrical arches in the courtyard, as well as the simplistic design on the inside. This mosque is not as flashy as the Blue Mosque, but I loved it for that. 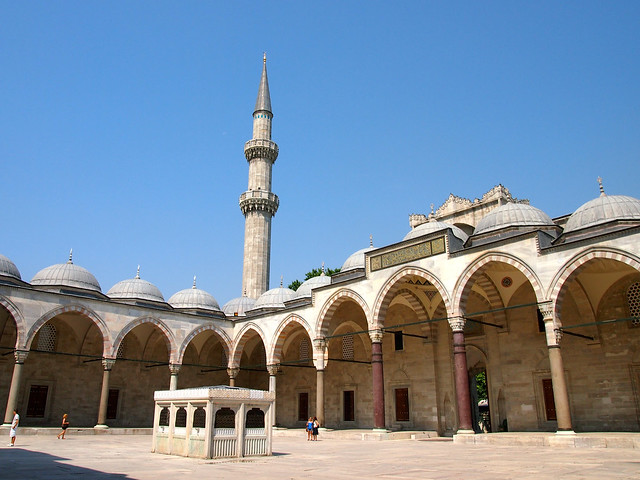 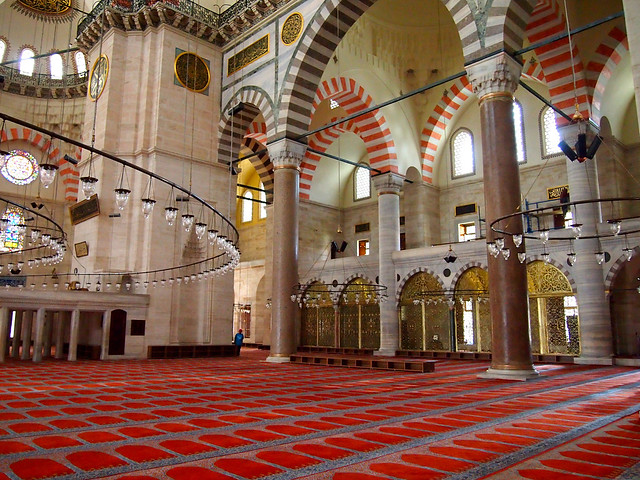 Inside, my guide Suleyman explained to me how worship at a mosque works, and also told me a bit about Mimar Sinan, often considered Istanbul's greatest architect. Sinan was the chief architect/engineer for three sultans in the 1500s, and is credited with designing hundreds of structures in Istanbul (the number is anywhere between 360 and 475).

The Süleymaniye Mosque, completed in 1557, is perhaps his most famous work. 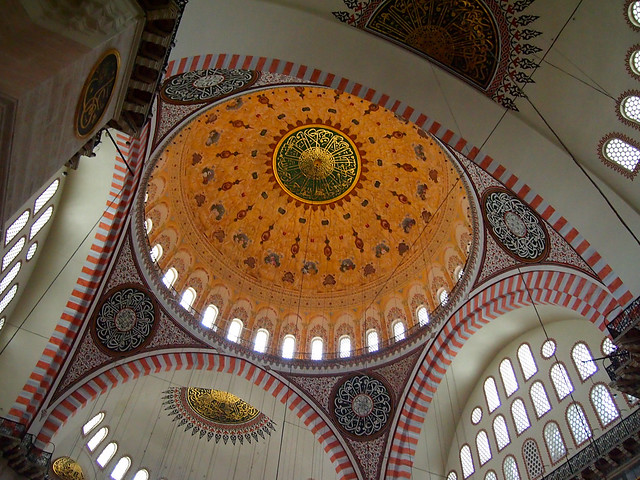 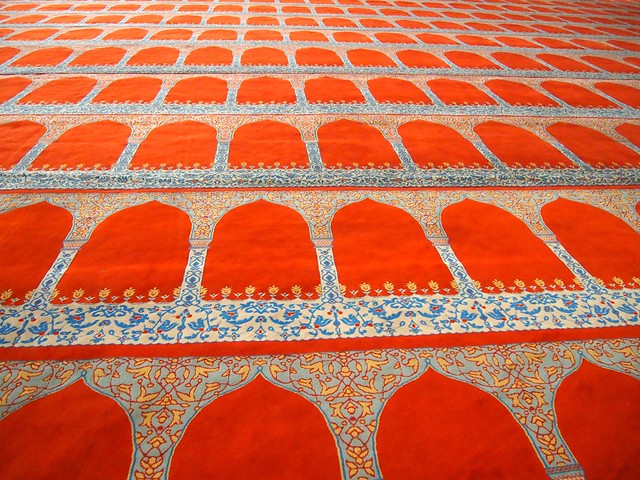 After taking our time inside, Suleyman and I then headed outside behind the Süleymaniye Mosque. After dodging sprinklers and shaking off our quiet, contemplative moods, we were greeted to a pretty incredible view out over the Bosphorus. 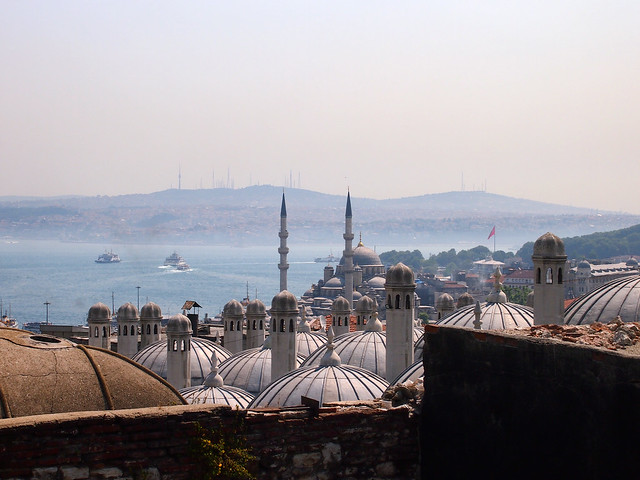 Next we sauntered along some cute backstreets and wound up at a little cafe overlooking the city and the Bosphorus. While Suleyman clearly knew the owner, there was no pressure to buy any food, and so we simply sat sipping cold drinks instead, watching the water traffic and listening to the sounds of the city below. 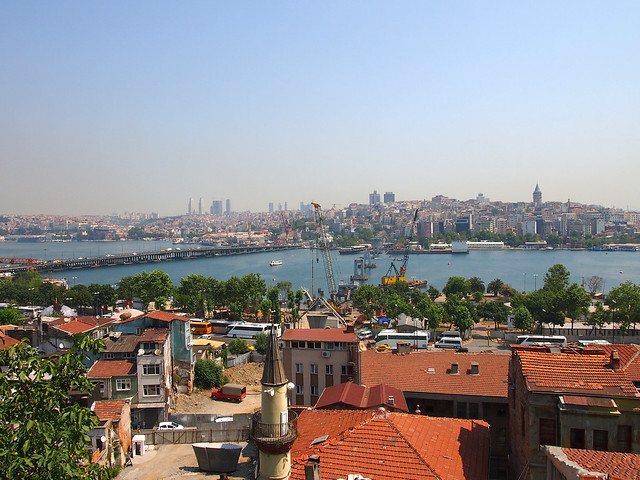 Once we were sufficiently refreshed, Suleyman asked if I wouldn't mind making a extra, unscheduled stop. “It's my favorite place in the city,” he said. Of course I agreed.

The place turned out to be the Rüstem Pasha Mosque — another Sinan masterpiece in the city's Eminönü district. The small mosque didn't look like much from the outside, but, once we entered I understood exactly why it was Suleyman's favorite. 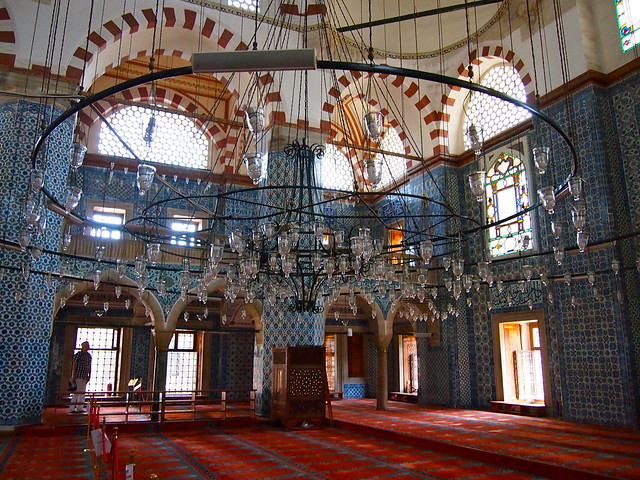 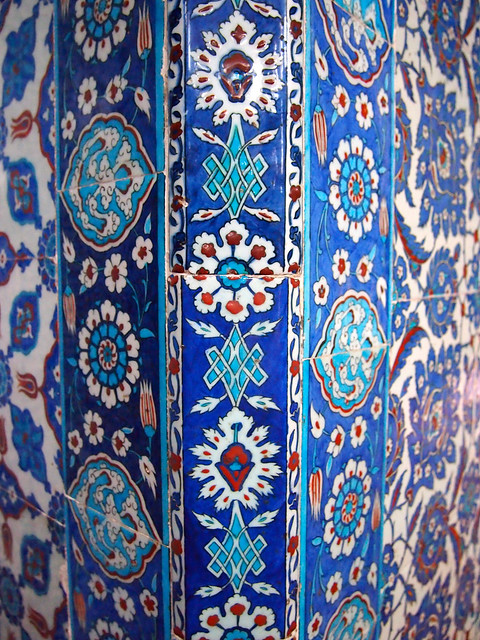 The interior of the Rüstem Pasha Mosque is covered with incredibly vibrant blue Iznik tiles. The tiles contrast perfectly with the orange carpeting, making it a place that begs to be photographed. And here, I didn't feel weird snapping pictures — because we were essentially the only ones inside. 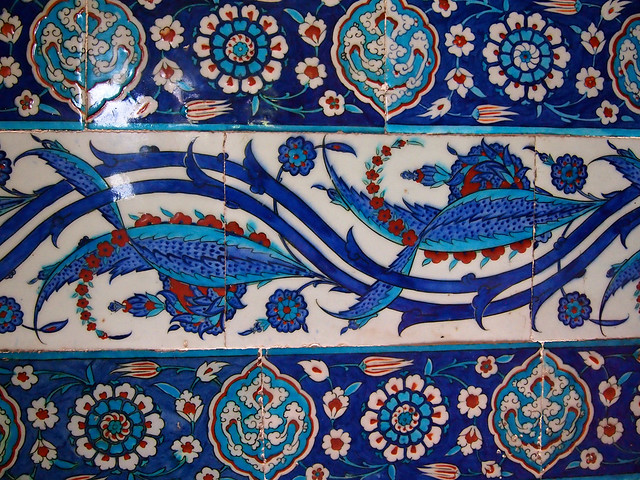 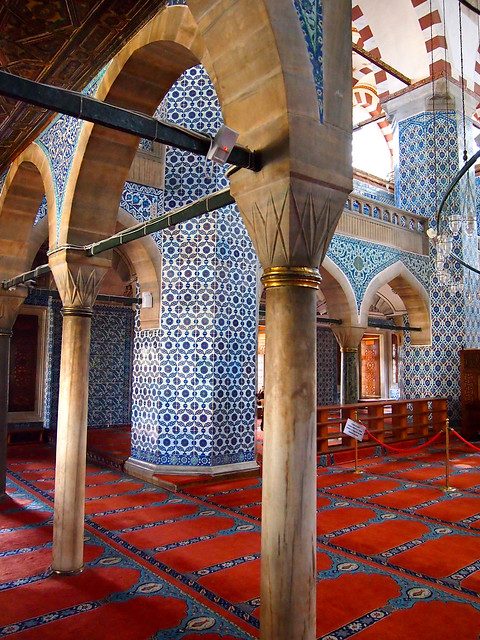 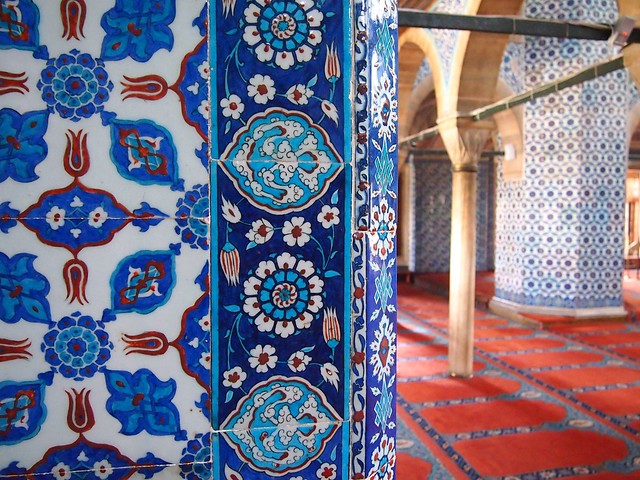 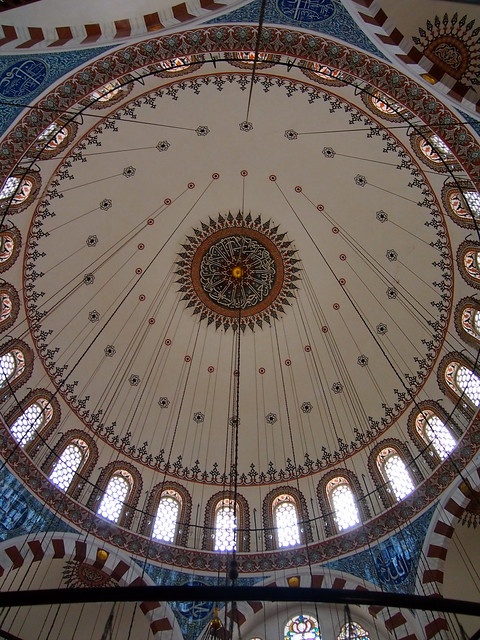 After thanking Suleyman profusely for adding this beautiful place to my tour, I then followed him to our last stop of the day — the Spice Bazaar. Also known as the Egyptian Bazaar, the Spice Bazaar is the second-largest bazaar in Istanbul.

It is unique in the fact that this is (obviously) where spices are sold in the city, and we spent a bit of time wandering through mounds of richly-colored, powdery spices and trying samples of Turkish Delight. 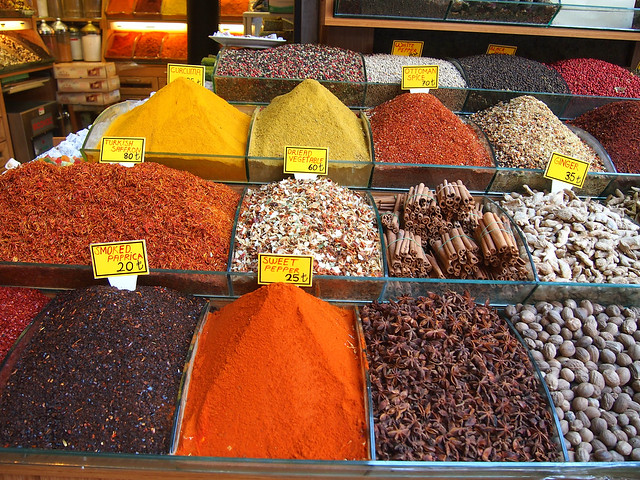 By the time my 4 hours with Suleyman was up, I realized a couple of things all at once.

First, I realized both how much and how little of Istanbul I had seen.

And secondly, I realized that I had, in fact, discovered some of those “hidden” parts of the city — and then some. 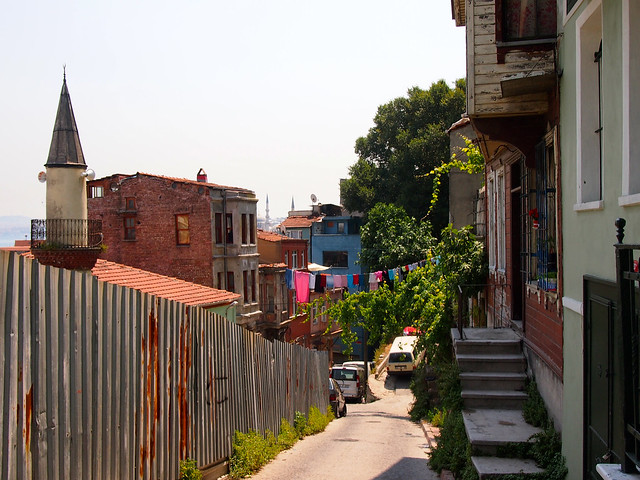 You definitely get value for money with an Urban Adventures tour, along with a glimpse into sides of Istanbul you would probably miss on your own.

Which “hidden” part of Istanbul would YOU most like to uncover?

*Note: I received a complimentary “Hidden Istanbul” tour from Urban Adventures, and lucked out at having the guide all to myself. All opinions, as usual, are my own. To book your own Urban Adventure in Istanbul, click on the banner below: