No matter where you travel to in the world today, chances are you can find a food tour.

This isn't just because people love to eat though (although I'm sure that's at least *part* of the reason). It's because, no matter where you are in the world, food is one of the best reflections of a culture. Food can give you an insight into a destination's past, and also a glimpse into its future.

So when I was invited on a food tour of London's East End (a part of London I knew almost nothing about), I jumped at the chance. 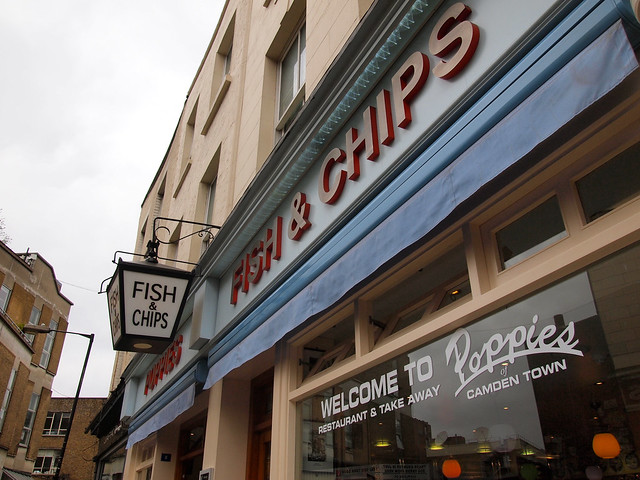 Eating London Food Tours is a brand new company looking to break into the food tour scene. They were still in trial runs when I booked a spot on a Saturday morning tour, but our guide Nicole was already quite polished in her presentation.

The thing I love about food tours is that it's not just about the food. On this particular tour, we also learned a heck of a lot about the history of the East End. It's this history — of immigrants, poverty, and re-invention — that has influenced the area's food culture over the years.

Today, the East End is a lovely mash-up of people and cultures, and this is definitely reflected in what was probably one of the best food tours I've been on thus far.

We began our foray into the edible delights of the East End at The English Restaurant. The building used to be a house hundreds of years ago, and inside even has wood from an old nearby church that is no longer standing.

The restaurant was cozy and served up some amazingly delicious banana pudding. A perfect way to start a chilly London morning. 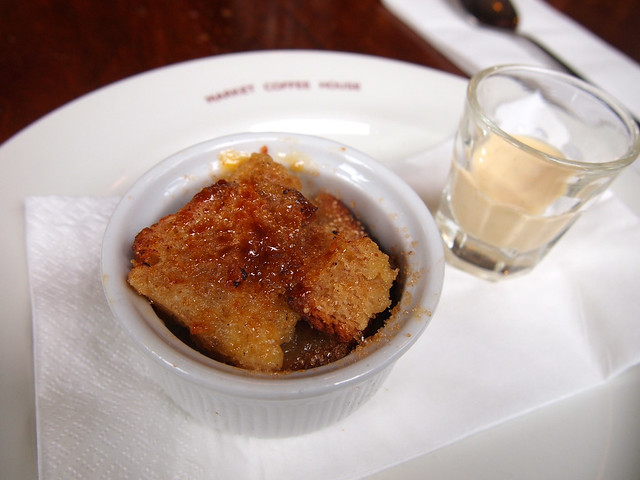 After our pudding, we headed to St. John for something a bit heartier. This restaurant, located in a building that was once a bank, is known for its bread, and for its bacon.

Both the bread and the bacon are exclusive to St. John (baked and cured on site), and the chef here is known for using EVERY part of the animals he cooks with. We had a bacon sandwich, made even more delicious by a secret-recipe ketchup. 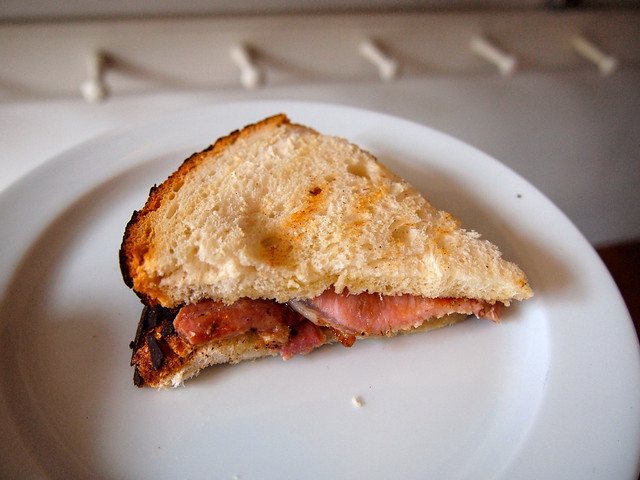 The House of AndrOuet

Our next stop was inside Spitalfields Market, which today is a fun conglomeration of merchants and restaurants. We hit up AndrOuet, a French cheese and wine shop with some astoundingly well-versed cheesemongers.

At AndrOuet, they cut out the middle-men and buy cheese direct when it's young, and mature it on the premises. They feature about 200 cheeses throughout the year, but we only tried 3.

First we had an English cheddar, which we learned makes up about 51% of all cheese sales in Britain. This was followed by a Waterloo cheese (very similar to Brie), and we then ended with a Stilton. Stilton is basically a bleu cheese, but it's the name that is special. A true Stilton cheese can only be made in 3 counties in England. 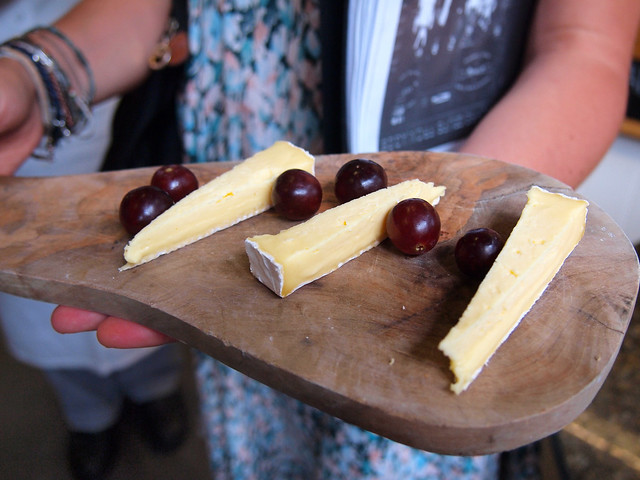 After a sampling of English cheeses, we were off to try another English staple: fish and chips.

This dish, we learned, was actually invented right here in the East End. Britain adopted fries from Belgium and buttered fish from Portugal, but it was actually a young Jewish boy from the East End who began selling the two together from a basket around his neck in the 1800s.

Not quite dating back that far, Poppie's is nonetheless a locally-owned neighborhood staple. In a fun 50s-themed atmosphere, we had fried Cod and chips with vinegar. It was surprisingly light! 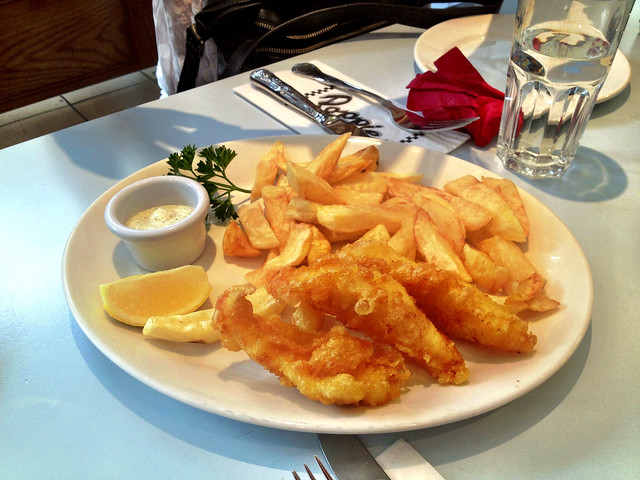 No food tour of the East End would be complete without a stop on Brick Lane. In the 1970s and '80s, as more and more Bangladeshi immigrants moved to London and called the East End home, curry shops began to pop up all over the place. Today, there are more curry houses in England than anywhere else in the world, essentially making curry the national dish.

We stopped in at Aladin for 3 different curries. While curry isn't exactly my favorite food, I'm now glad I can say I've had one on Brick Lane. 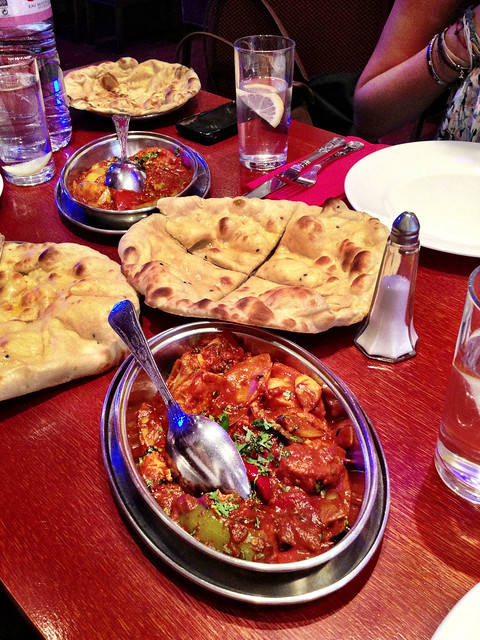 Even though none of us could possibly fathom how we were going to eat MORE food, we weren't done yet. Our next stop was Beigel Bake, which is yet another locally-owned shop that's been in the neighborhood forever.

It's open 24 hours a day, and you can usually find the owner there working behind the counter. The shop smells like heaven, and you can actually watch them making the bagels in the back of the shop.

Here we had Beigel Bake's specialty — a corned beef bagel with pickles on top. It was pretty much to die for (which I actually thought I might, being so full at this point). 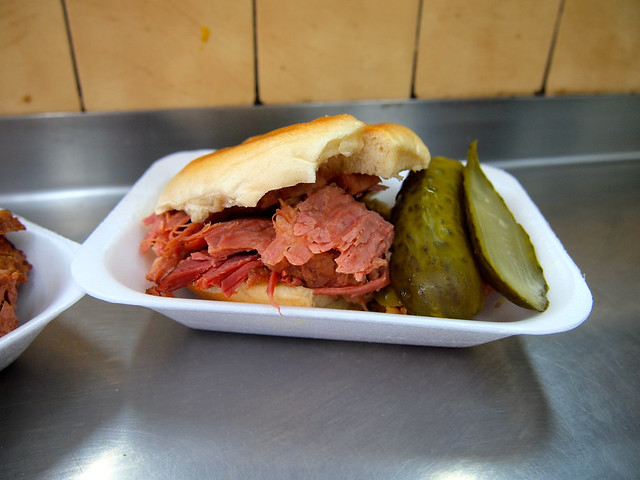 From Beigel Bake, we walked from Brick Lane to Shoreditch, Nicole pointing out interesting street art and other fun facts along the way. We eventually ended up at Pizza East, where we sat down for some tea and a chocolate salted caramel tart.

Even though I was SO full by this point, I couldn't say no to this decadent end to our tour. And I'm glad I didn't — I think it was my favorite thing I ate! 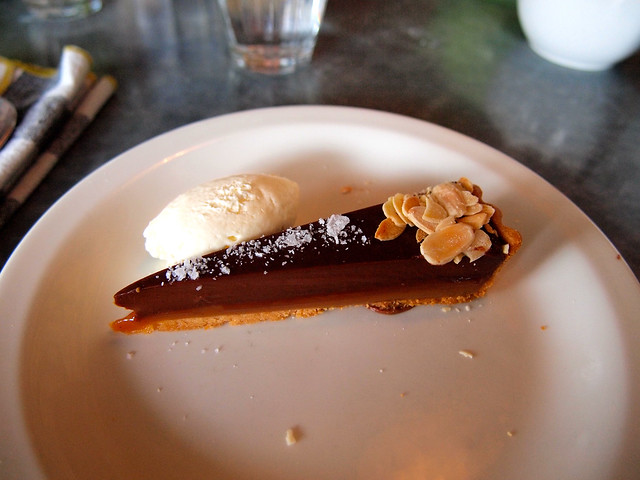 I don't think I've ever been on a food tour where SO MUCH food was involved. But the variety was so perfect that I definitely couldn't complain. The different foods also reflected the diversity of the East End, which Nicole did a great job of supplementing with plenty of interesting facts as we walked from place to place.

If you like to eat AND want to explore a part of London that most tourists skip, I can highly recommend this East London food tour!

Interested in taking this food tour yourself? Here's all the info you'll need:

HOW MUCH: £69 ($88 USD) per person. I know this sounds like quite a bit, but you get SO MUCH FOOD, as well as a walking tour around the East End.

If food tours are your jam, here are some others to try in London:

READ NEXT: A Guide to the Most Unique Themed Afternoon Teas in London

Which of these dishes would YOU most like to try in the East End?

*Note: I did receive a complimentary food tour of the East End thanks to Eating London. As always, though, my opinions are all my own.