Yup, that's right: I kissed a moose, and I liked it.

But settle down — it wasn't anything raunchy or disturbing. And no, he did not slip me any tongue.

It was just all part of a day of animal encounters in south-central Alaska, made possible by 907 Tours and the Hilton Garden Inn Anchorage. 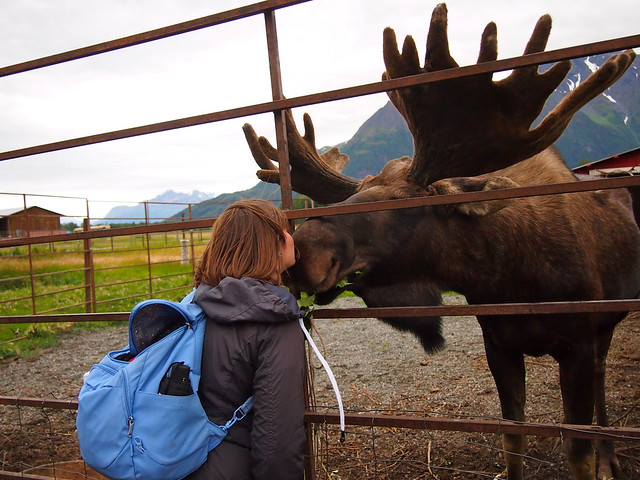 When given the option of exploring Anchorage on our own or going on a “wildlife encounter” tour while in Alaska last month, my sister and I took roughly 2 seconds to decide — we wanted the animals. We soon discovered that mostly everyone else in the group had opted to pass on the guided outing, however, and wondered briefly if we had chosen the wrong option. 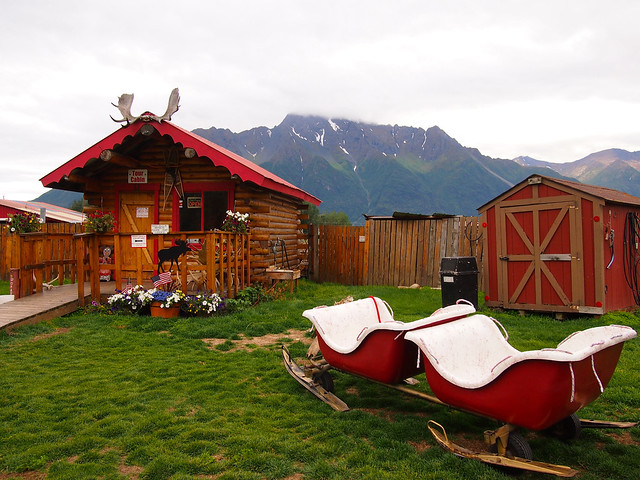 As soon as Susan picked us up in her 907 Tours mini-bus and began telling us about how she fell in love with Alaska 25 years ago, I knew we were in good hands — and in for a good time.

Our first stop of the day was the town of Wasilla (and no, you can NOT see Russia from there; I checked) and the Iditarod Trail Headquarters. Each winter, the famous Iditarod dog sled race makes a ceremonial start in nearby Anchorage, and then is re-started for real in the town of Willow.

But it's here in Wasilla that curious visitors can get to learn more about the race, the competitors, and the hardy dogs that make it all possible. 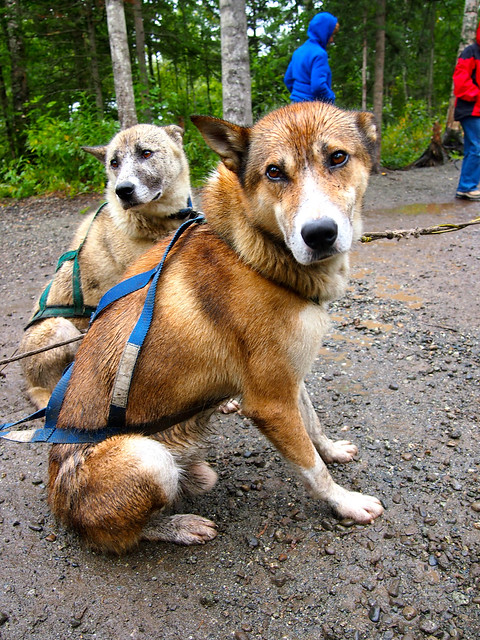 We watched a video about the dogs, which stressed that sled dog racing is not a cruel sport, but rather a sport that breeds enthusiastic professional athletes just like any other sport. I had never thought of it that way before, but it makes sense.

You can't force a dog to run from Anchorage to Nome (a distance of roughly 560 miles) any more than you can force someone to play competitive ping pong. If the passion and desire to win are absent, it's just not going to work.

I understood this a bit better once we headed outside in the rain to meet some Iditarod sled dogs and their musher, who has run 14 races in his lifetime. Despite being caked in mud with damp coats, the dogs were pulling at their harnesses and barking in a “let's go already!” kind of way. They clearly wanted to run. 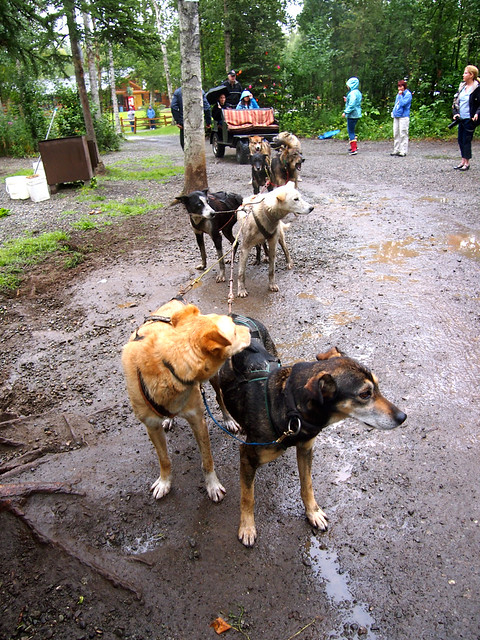 Since it was summer, we couldn't very well ride a true sled around (Alaska isn't ALWAYS covered in snow, despite what you may have been told), so the dogs pulled us around a short track in a cart.

Nothing compared to racing in the Iditarod, of course, but it was still a nice taste of this fascinating sled dog culture. I was just bummed that the musher never actually yelled “Mush!” 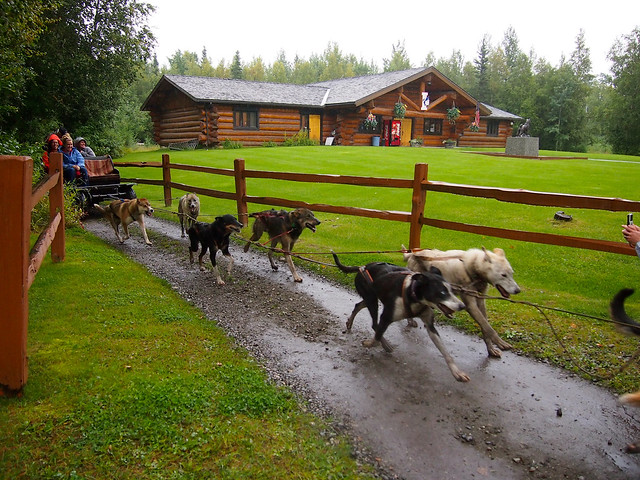 After a quick lunch in Wasilla, we next headed over to Palmer and the Musk Ox Farm. I'll admit that I knew virtually nothing about musk ox before this visit. As it turns out, though, they are quite interesting creatures!

The musk ox is considered to be an Ice Age mammal, and would have at one time roamed with the woolly mammoth and saber tooth tiger. They are native to the Arctic regions of North America and Greenland, though have also been introduced in places like Sweden and Siberia.

Today, however, their populations are dwindling — especially in places like Alaska. 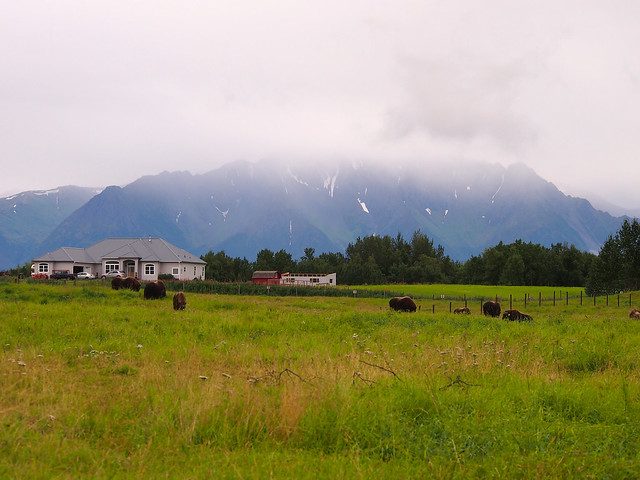 In the 1940s and '50s, musk ox were endangered in Alaska — as were many native coastal villages, which were some of the most impoverished in the developed world. A man by the name of John Teal had an idea to help both populations, and this idea eventually developed into the Musk Ox Project and farm, which began operation in 1964. 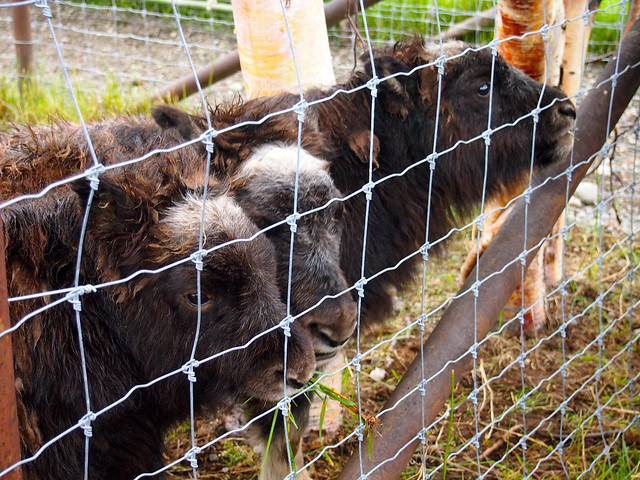 The Project's goal is to domesticate the musk ox in attempts to save it from extinction, while at the same time promoting qiviut production as “a gentle and sustainable agricultural practice in the far north.”

Qiviut is the name given to the soft underhair that a musk ox grows in the cold winter months to use as insulation. This incredibly soft wool is shed once every spring (with each ox producing 4-8 pounds of rare raw fiber), and can then be made into some of the warmest garments in the world.

Qiviut is softer than cashmere, water resistant, and 8 times warmer than wool. 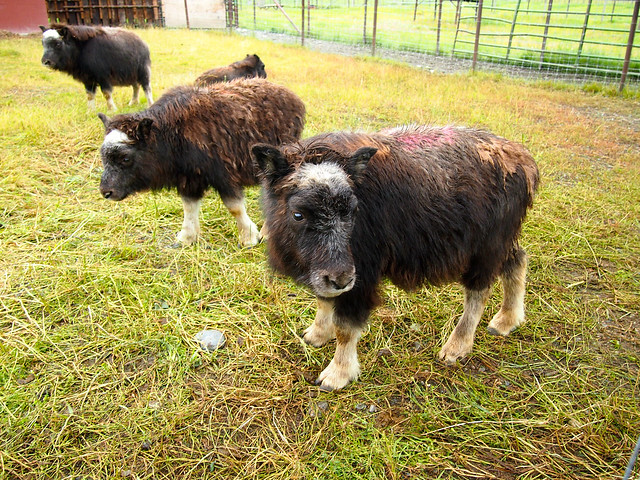 The Musk Ox project — which has been funded by Kelloggs and the University of Alaska — has succeeded in both increasing the musk ox population on the farm (there were about a dozen seriously cute babies when we visited) and providing hundreds of native women in northern Alaska with an income. The women learn to knit traditional patterns with the qiviut, and the Musk Ox Farm then sells these to anyone who can afford the hefty price tag.

The whole project is non-profit, and incredibly inspirational. 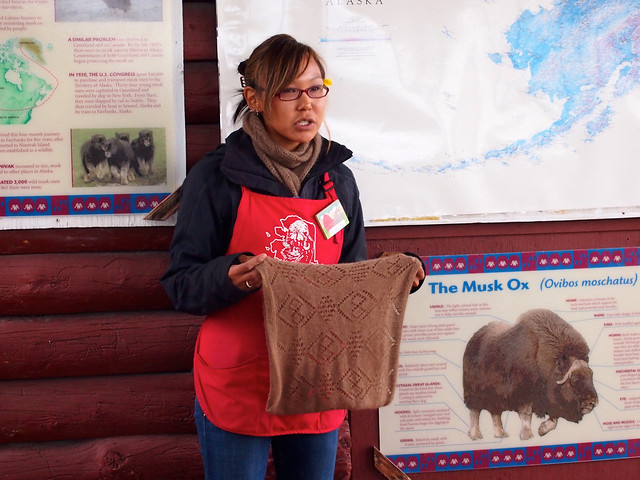 After almost being inspired enough to adopt a musk ox, it was sadly time to leave and head to our final destination of the day — the Williams Reindeer Farm, also located in Palmer. 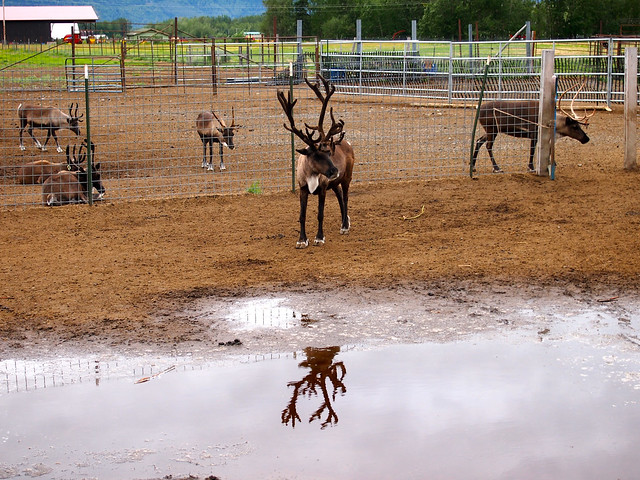 We weren't really sure what we'd be doing/seeing at a reindeer farm, but this turned out to be the highlight of our day (which is hard to believe if you've just read the rest of the post, I know!).

First on the docket was feeding some of the 150 reindeer who call the farm home. Reindeer, it turns out, are very much like dogs — friendly, curious, and willing to do just about anything for food.

Much laughing and squealing ensued as dozens of cheeky reindeer surrounded us to compete for some nibbles. 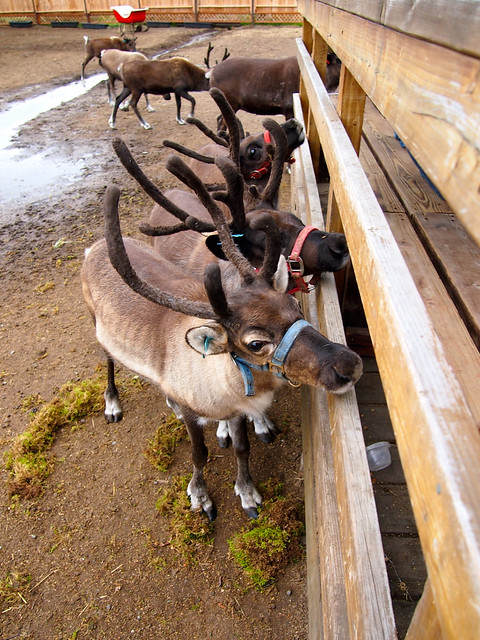 I could have done this all day. I LOVED THEM. 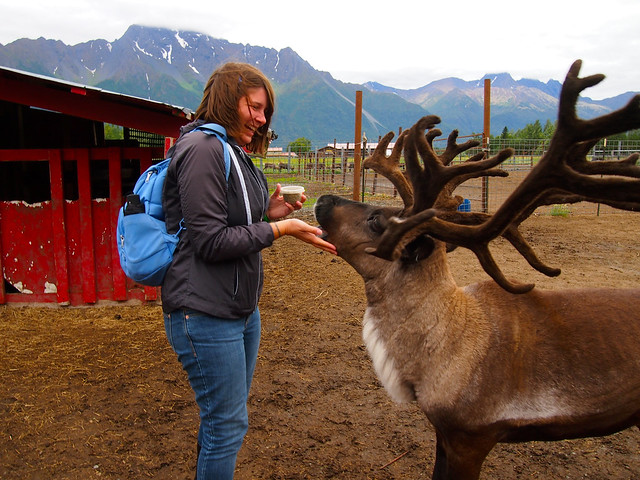 After the reindeer and a slightly grumpy bison, we met the star of the show — Denali the Moose. 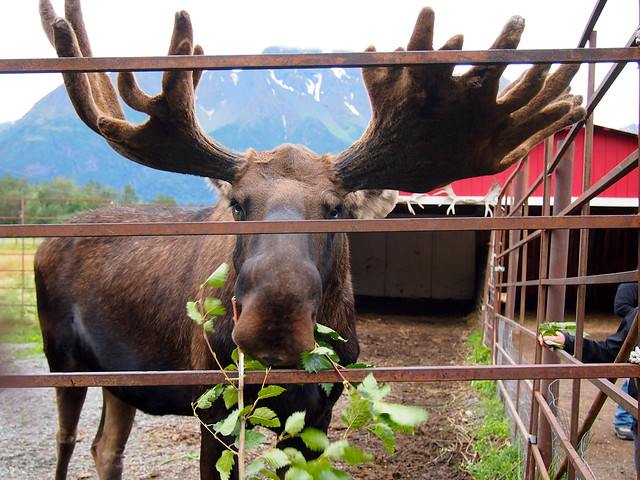 I'd never actually seen a real moose up-close before, so I was blown away at how HUGE Denali was. And when I found out that we could feed him leafy branches and plant kisses on his stubbly nose? I was in love. 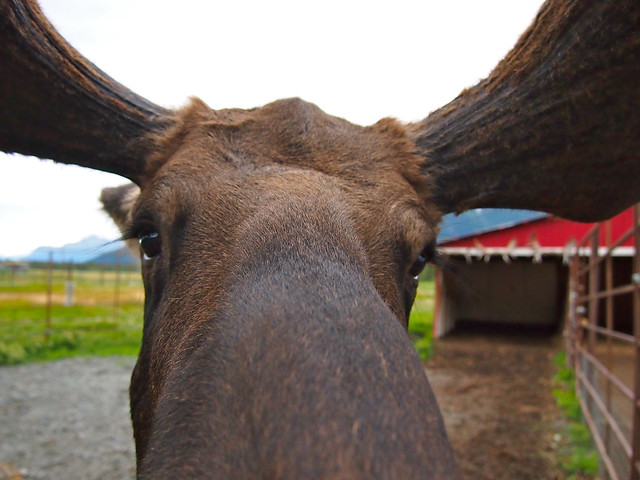 So yes, finally we get to me kissing a moose. Multiple times. 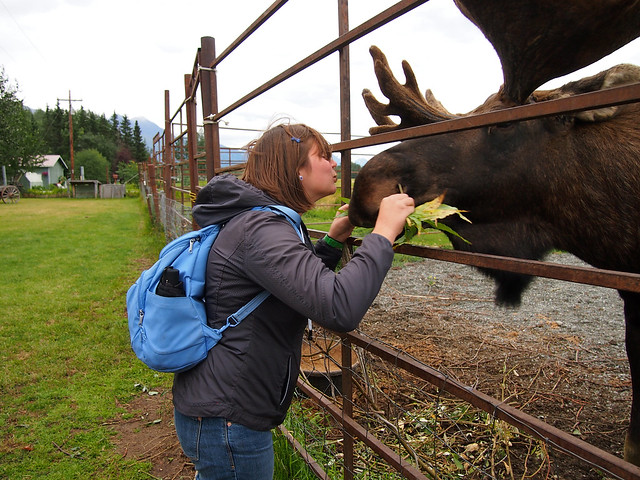 I definitely liked it.

(And here's a video of the highlights from that day!)

At the end of the tour, despite smelling like a farm and being wind-blown from the moody Alaska weather, I think it's safe to say that we all felt like we'd made the right choice of activity for the day. 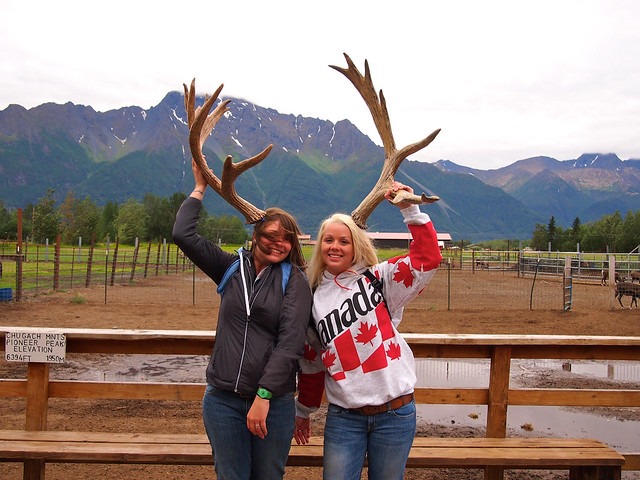 Which of these Alaskan animal encounters would YOU most like to have?

*Note: My trip to Alaska (including this awesome wildlife encounter) was sponsored by the Hilton Garden Inn Anchorage. All opinions, however, are entirely my own.

For my full review of the Hilton Garden Inn Anchorage, click here.