Ground Zero looked a whole lot different than it had the first time I'd laid eyes on it in 2003.

Then, it had been all fences and rubble and construction tape. Chunks of cement and twisted metal that still sat in piles near where it had fallen as the World Trade Center towers collapsed two years earlier.

When I went back to the site in 2012, it looked completely different.

Different, but no less striking.

My first visit to the 9/11 Memorial in New York City came roughly 11 years after the fateful day in 2001 when Americans stared, dumbfounded, at their television screens as a nightmare played out before our eyes. I visited before the official museum was open – before the site was officially the National September 11 Memorial & Museum – but it didn't lessen the memorial's impact.

Designed by architect Michael Arad, the memorial consists of an urban “forest” of 400 Swamp White Oak trees, and two sunken pools with waterfalls in the footprints of the Twin Towers. These pools are meant to act as symbolic voids – representing absence.

Nearly 3,000 people lost their lives on September 11, 2001, and all of their names – along with the names of the victims of the World Trade Center bombing of 1993 — are etched into the raised sides of the sunken pools.

Visiting the Memorial in and of itself was touching. But my mom, sister and I also visited the 9/11 Tribute Museum, across the street from the Memorial and official 9/11 Museum. Opened in 2006, the Tribute Museum is a project of the September 11th Families’ Association, and aims to educate and bring together those who want to learn with those who were actually there.

For most Americans, September 11, 2001, and all the raw emotions that went along with it will never leave us. I will never forget sitting in my high school class room, staring open-mouthed at the flames. The ash. The tiny silhouettes of people jumping out of windows. Whatever has happened since doesn't diminish the shock and sadness I felt that day.

At the 9/11 Tribute Museum, we walked through the museum-like exhibit that houses testimonials and photos and other memories from 9/11, collected from family members who lost loved ones, survivors, first responders and rescue workers, civilian volunteers, and community residents. Some of the items brought tears to my eyes.

We are breathing the dead, taking them into our lungs as living we had taken them into our arms.” – Hettie Jones, New York City poet

In one of the last rooms, we were encouraged to write down our own stories. One already hanging there reached out and clamped down on my heart — it was most likely written by a child and just said “I wish that I could get a time machine and go back and stop the plane.“

After composing ourselves, we headed over to the Memorial itself with two volunteer guides from the Tribute Museum. Their volunteer-led tours are the only real tours at the site – and they are incredible.

“On our guided tours of the 9/11 Memorial, you’ll experience the stories of 9/11, told by those who were there. Our guides are 9/11 family members, survivors, rescue and recovery workers, civilian volunteers, and lower Manhattan residents whose stories are testaments to the perseverance of the human spirit. They share insight on the history of 9/11 and the memorial pools, the survivor tree and the rebuilding.”

Our guides were both former WTC employees – both had been in one of the towers on the morning of the attack, but managed to get out in time.

I will never forget when one of our guides told us about going back to work after everything was over, and realizing that more than half of her coworkers were no longer alive.

On our tour of the memorial, we learned about the sunken pools, the Freedom Tower, and the “survivor tree” – a callery pear tree that was found burnt and mostly dead at Ground Zero, but that managed to cling to life and survive. The tree has become a symbol of hope and rebirth in New York City, and is now located at the 9/11 Memorial.

I know that non-Americans may not be as connected to Ground Zero as I am; as most Americans are. But, no matter where you come from or what you remember of 9/11, I urge you to visit the 9/11 Memorial if you find yourself in New York City.

And, if you want to hear incredible stories told by real people, check out the Tribute Museum and its tours.

9/11 Museum – General admission is $24, and includes entry to the museum and memorial. The museum reopens to victims' families on September 11, 2020, and to the general public on September 12. The Museum will be open Thursday and Friday from 12-7 p.m. and on Saturday through Monday from 10 a.m.-5 p.m. The Museum will be closed Tuesdays and Wednesdays. If you have a New York City Pass, you can save on museum entry. Or you can purchase a ticket in advance here.

9/11 Tribute Museum – Guided walking tours plus a visit to the tribute museum costs $25 for adults.

One World Observatory – Round out your visit with a trip to the observation deck atop the “Freedom Tower” (One World Trade). Admission starts at $34 per person. Go up just before sunset for some amazing views. (And I recommend booking a skip-the-line ticket in advance. Book here.)

Tours to check out: The following tours encompass many of the above experiences:

If you want to understand the memorial and museum better, I highly recommend taking a tour.

Have you been to the 9/11 Memorial? If not, will you go someday? 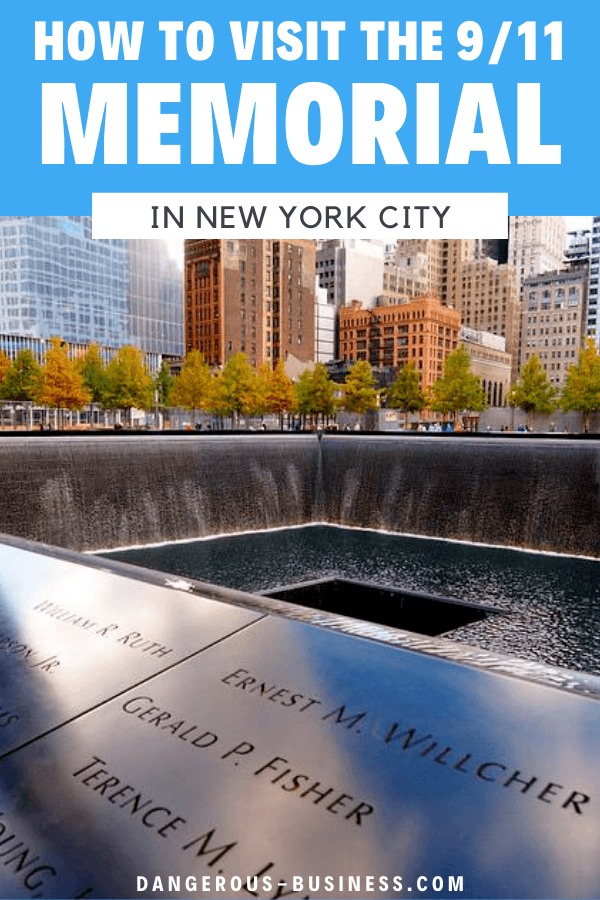