Top 5 Things to do in Taupo, New Zealand

The town, popular with tourists during the summer months, is situated right on the northern shore of Lake Taupo. Though it may not look like much to the naked eye, Taupo can surprise you if you let it.

Top 5 Things to do in Taupo 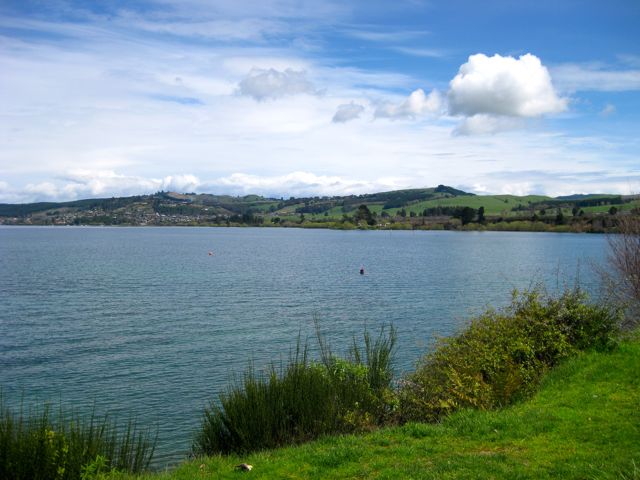 Lake Taupo, covering a surface area of 238 square miles, is New Zealand's largest lake by surface area. But this freshwater lake is not actually a lake at all. It's actually a volcanic caldera, created by a supervolcanic eruption more then 26,000 years ago. Even though the volcano's last eruption was in the year 210, it is still considered dormant, as opposed to extinct. 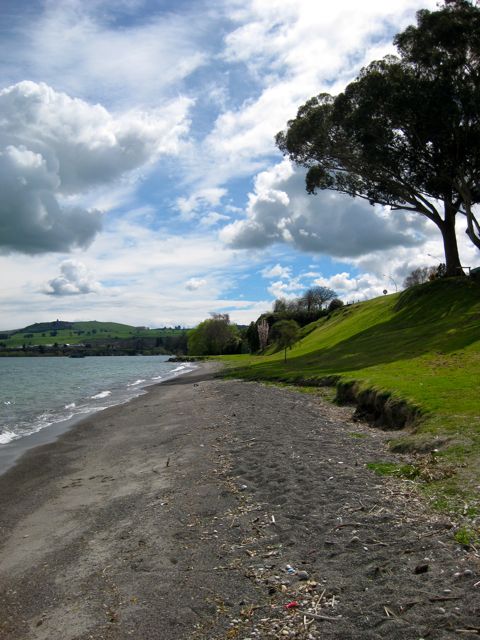 Today, the lake draws tourists and fishermen, who come to catch brown and rainbow trout in Lake Taupo's waters. Even if you're not a fisherman, it's worth it to just take a stroll along Lake Taupo's shore. On a clear day, you can see all the way to the southern end, where the tops of the volcanoes in Tongariro National Park can be seen. 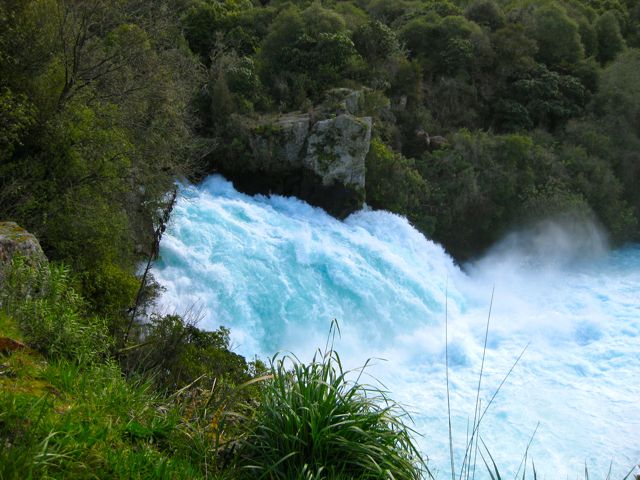 Huka Falls is actually just one tumbling waterfall through a narrow gorge on the Waikato River. But don't let that convince you that it's not impressive – because it is.

Upstream from Huka Falls, the Waikato River runs slower and about 100 meters wide, then is suddenly forced through a gorge only 15 meters wide. The water flowing through this channel (which you can stand above on a bridge just upriver from the Falls) moves at a furious, churning pace.

As you watch (and listen to) the frothy turqouise water thunder through this small canyon, it's easy to see why the Waikato River has been harnessed for hydroelectric power. 11 power stations along the river generate about 65% of the North Island's power. They can actually manipulate how fast the water flows, depending on the electricity demand at certain times of day. 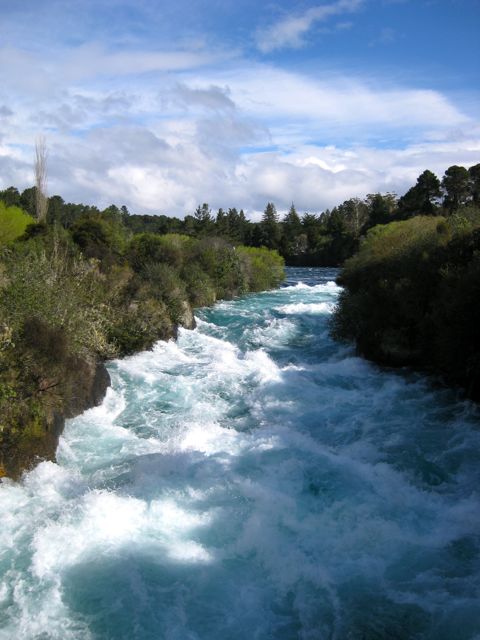 As far as waterfalls go, Huka Falls certainly isn’t the highest or loudest to be found in New Zealand. But standing on the footbridge and watching that foamy, blue-green water roaring beneath your feet? Yeah, that’s pretty cool. And, if you want to get really up-close-and-personal with Huka Falls, book a seat on the Huka Falls Jet, a jetboat that zips down the Waikato River and takes you within feet of the thundering water.

3. Visit Craters of the Moon 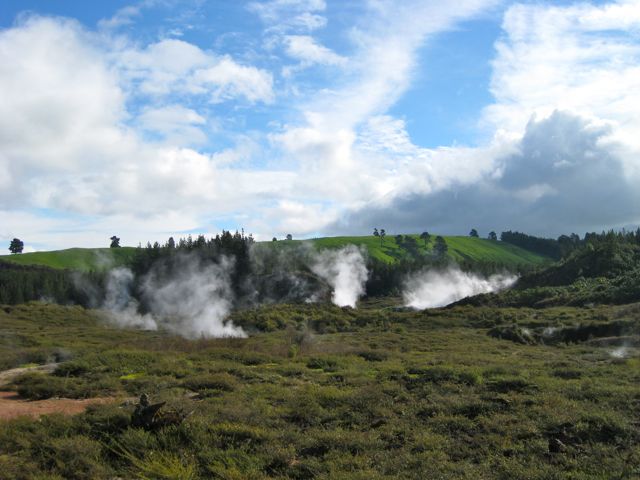 Craters of the Moon is Taupo’s main geothermal park. The city of Taupo is located on NZ’s “Thermal Highway,” and (as previously mentioned) there is a lot of volcanic activity that goes on in the region. Taupo doesn’t boast the diversity of geothermal wonders that nearby Rotorua does, but Craters of the Moon is still worth a visit if you're in town.

Entry to Craters of the Moon is only about $5, and there is a wooden pathway that loops around the park and leads up to a lookout point. You are advised to stay on this boardwalk, as certain active areas are not safe. But don't worry – you'll still get to poke your head into some eerily steaming craters along the way. 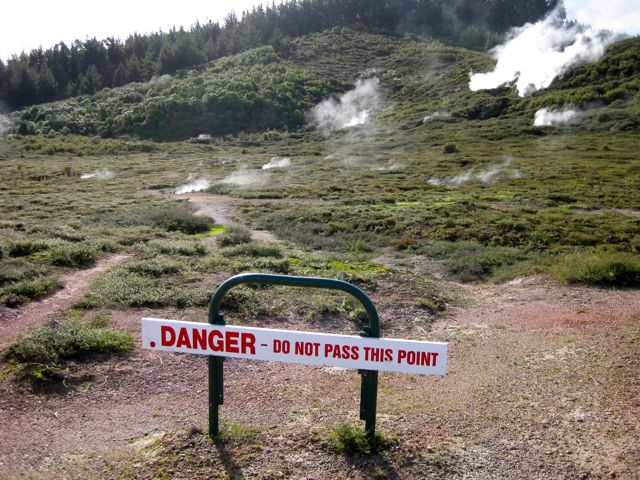 The area looks like a normal plain and forest, except for the fact that it is pockmarked with hundreds of smoking craters. Smoke drifts up randomly everywhere you turn, and you can expect to find a distinct smell of sulfur on the air. 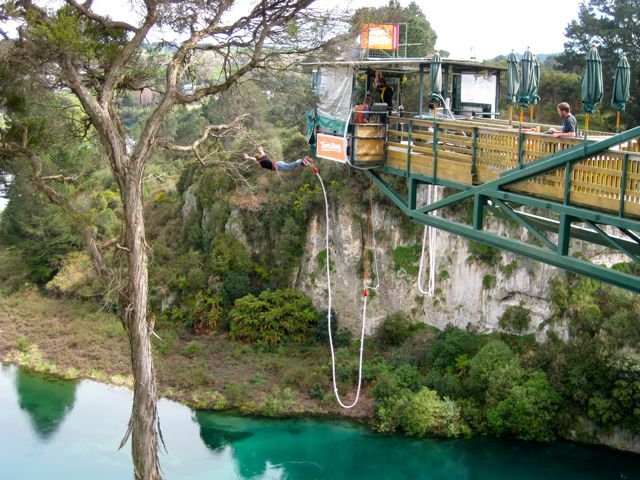 No trip to New Zealand could possibly be complete without a bungee jump – it was invented here, after all! While Queenstown on the South Island boasts the greatest variety of bungee options, Taupo Bungy is also a worthwhile spot for a daring dive.

The location of Taupo Bungy is stunning – you leap off a ledge hanging high above the blue-green waters of the Waikato River. And, unlike at some other sites, you are able to do a water touch here if you want. At 47 meters, it's the highest water-touch bungee in New Zealand. Basing careful calculations on your weight and height, the jump operators can adjust your bungee cord to allow you to dip your hands into the water, or submerge your body entirely.

Even if you've jumped elsewhere, it's worth doing it again in Taupo. Plus, the price is one of the most affordable in New Zealand.

They also have recently added a canyon swing, called the Cliff Hanger, which would also be perfect for any adrenaline junkie. 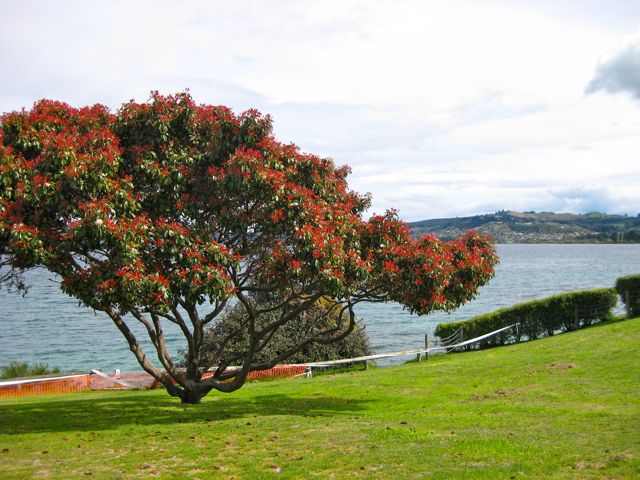 Taupo isn't the adventure hub that Queenstown is, nor a metropolitan center like Auckland. It's quieter, smaller, and much more conducive to a relaxing weekend getaway.

Grab lunch at a cafe, take a stroll around town, and head down to the fishing boat harbor. Grab a picnic bench near the lakeshore, and watch people play the “Hole in one challenge,” where the challenge is to drive a golf ball onto a tiny island floating out in the lake.

If you're into aerial sightseeing, book a seat on a floatplane or helicopter and check out the area from above. 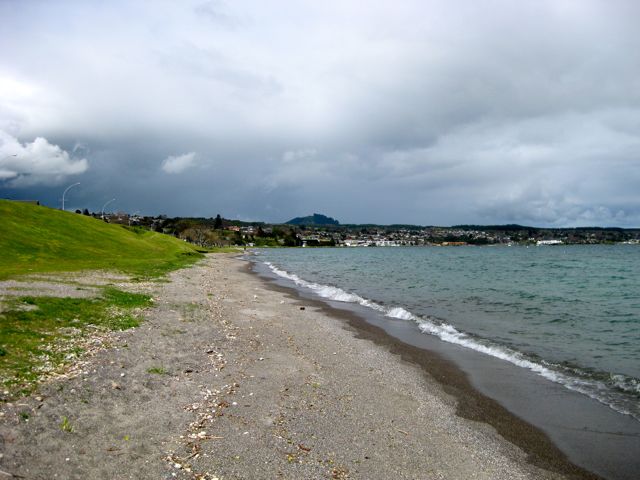 But whatever you decide to do, just remember to take your time, and enjoy yourself in Taupo. It really is a great little town.

Where to stay in Taupo: The Gables Lakefront Motel is the highest-rated hotel in Taupo on TripAdvisor, followed by The Cottage Mews Motel Taupo. Check out all the best Taupo hotels here.

Tours to take in Taupo:

Have you visited Taupo before? If so, what were some of your favorite activities to do there? 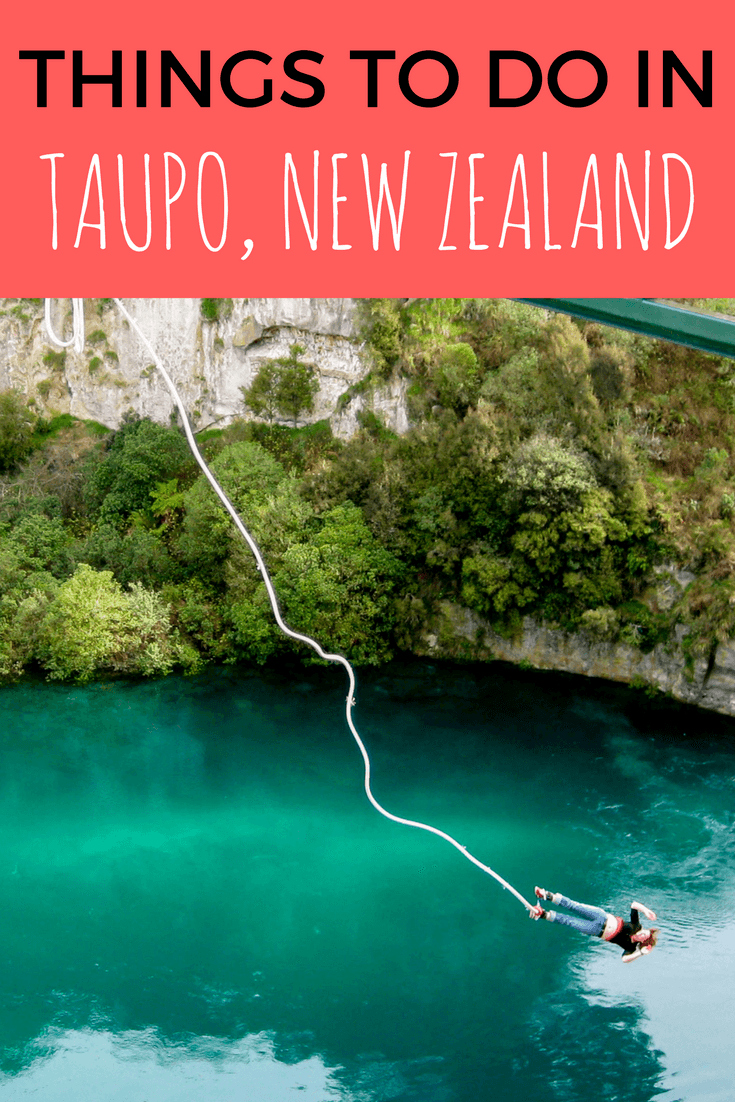 38 Comments on “Top 5 Things to do in Taupo, New Zealand”