Tips for Visiting Yosemite National Park in One Day

“Among them are killers.”

This is what the first Caucasians to visit Yosemite Valley were told upon descending into the granite valley in 1851. Except the Sierra Miwok phrase actually came out “yohhe'meti,” and was referring to the Ahwahneechee people who were populating the valley at the time.

The name, however violent, stuck.

Today, Yosemite National Park is one of the most popular national parks in America, playing host to 3.7 million tourists per year. Landscape lovers come to Yosemite for its steep granite cliffs and domes — and serious rock climbers come for the same reason. 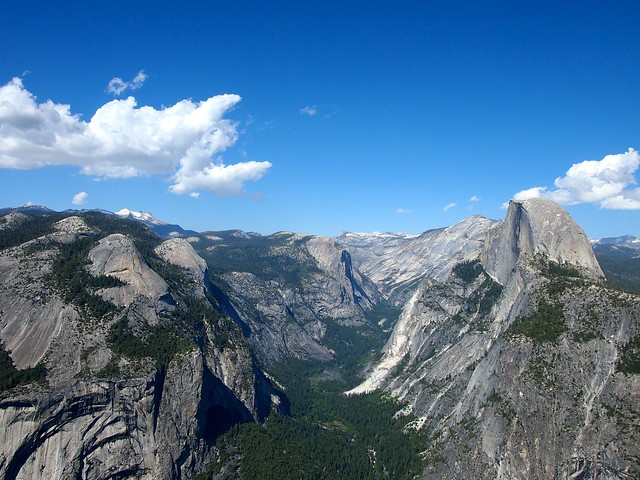 I've been to a good number of national parks and monuments by now, and Yosemite is definitely one of the most awe-inspiring I've seen. 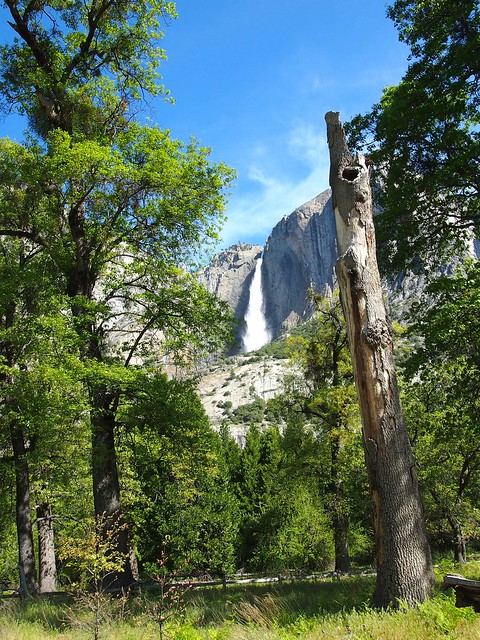 But what if you have only one day to explore the best of Yosemite?

It's certainly not ideal, but it's exactly the situation I found myself in on my first visit to this beautiful park. Here's everything you need to know about visiting Yosemite in one day.

When to visit Yosemite

Yosemite is open to visitors year-round, however heavy snowfall in the winter often means that many of the roads through the park are closed during the snowy months. High season is generally from Memorial Day to Labor Day, and, while the weather is warm and all the roads are open during the summer, these months are also the busiest.

If you can, do what I did — visit just before or after high season. I visited in early May, just after all the roads had reopened, but before all the park tours and shuttles started operating. It worked out perfectly, since a lower-than-usual amount of snowfall meant that I visited during the peak water flow for all of Yosemite's waterfalls.

If you have to visit during the summer, be sure to get into the park as early as possible to get a jump on the crowds.

What to see in Yosemite in one day

Yosemite is a huge park — it covers a total of 761,268 acres of forest and mountain. Most visitors focus on Yosemite Valley, which makes the park seem a bit more manageable.

Start your visit with a Ranger-led tour of the Valley. These 2-hour tours will set you back $25, but at least you know your money will be going back into the park. The tours are extremely educational, and the open-topped tram you ride in is perfect for taking photos of the Valley's famous rock formations like the Cathedral Rocks and El Capitan. 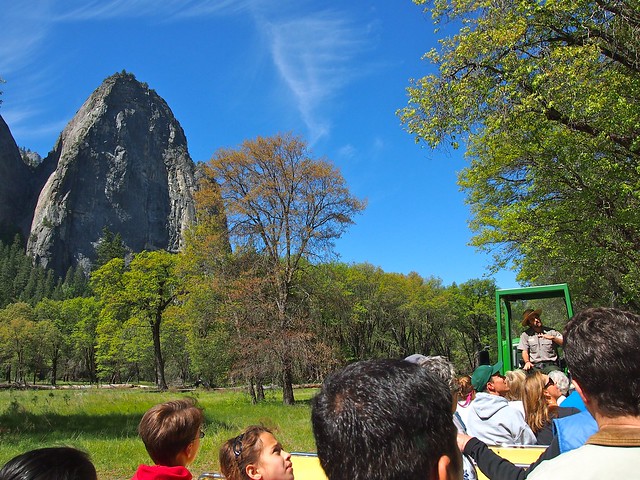 Our guide, Ranger Brian, shared all sorts of trivia with us about the park as we stopped at breathtaking viewpoints and rode through sun-dappled forest. He told us about how Galen Clark first “discovered” the Giant Sequoias in Yosemite, and championed protecting the park back in the 1850s. Thanks to Clark's efforts, Abraham Lincoln signed an Act of Congress in 1864 that protected Yosemite and turned it over to the State of California. 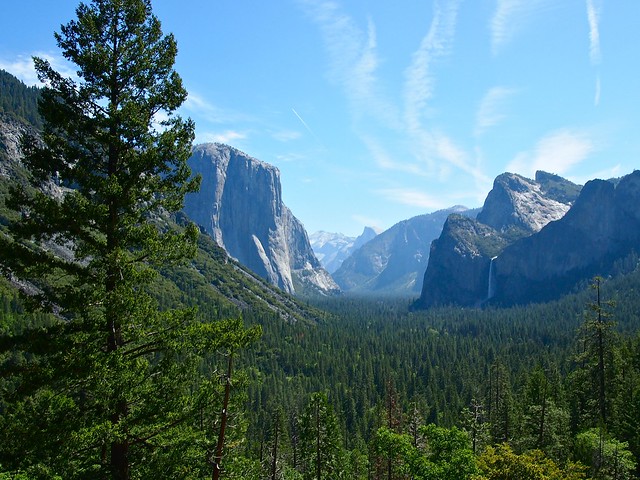 It's amazing to think that, in the middle of the Civil War, this one corner of the wilderness was deemed special enough to warrant protecting. Yosemite may not have been the first national park in the world (that designation goes to Yellowstone), but it was the first bit of land set aside exclusively for recreation. 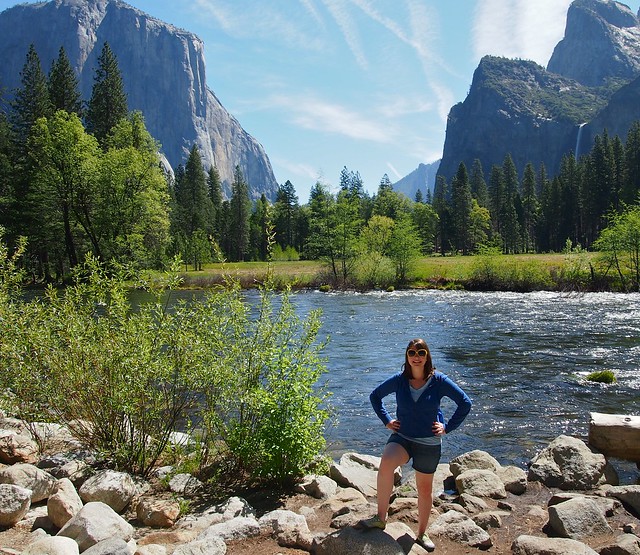 And, for the record, John Muir, father of national parks, loved Yosemite just as much as Yellowstone.

You'll see these Falls on your tour of the Valley, but be sure to take some time to get up close on your own. You can easily hike to the bottom of Lower Yosemite Falls in 10 minutes — well worth a detour. 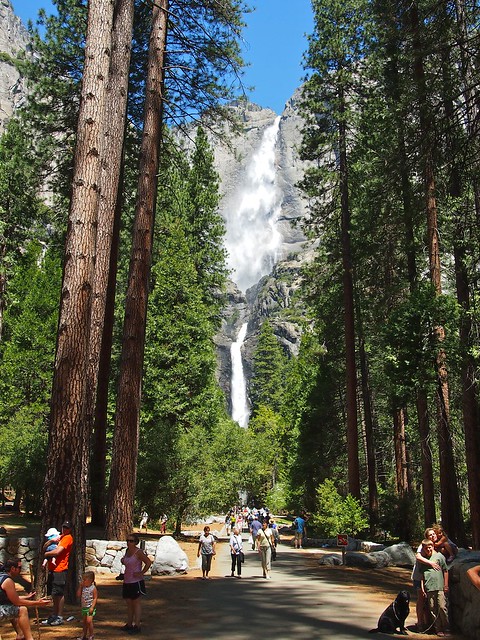 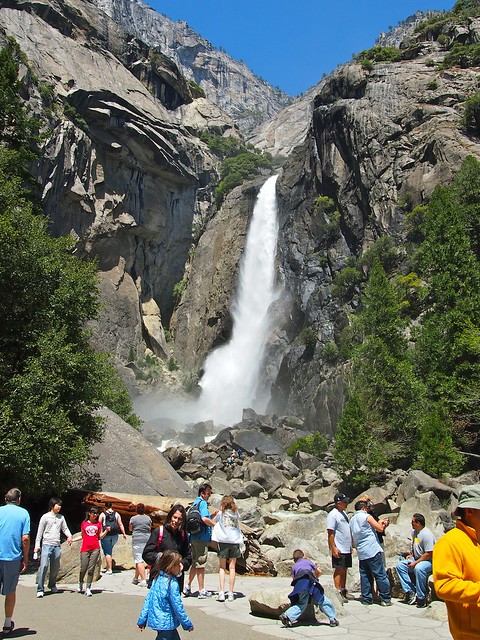 During high season, tours go to other parts of the park besides the Valley. When I visited, however, nothing else was offered. So my friends and I asked Ranger Brian what else he suggested we do with our day. He told us to either go up to Tuolumne Meadows, or drive up to Glacier Point.

We chose the latter, and I highly, highly recommend it.

Yes, it's a long, twisty drive up the mountain (it takes roughly an hour from the Valley Floor), but it is SO worth it. 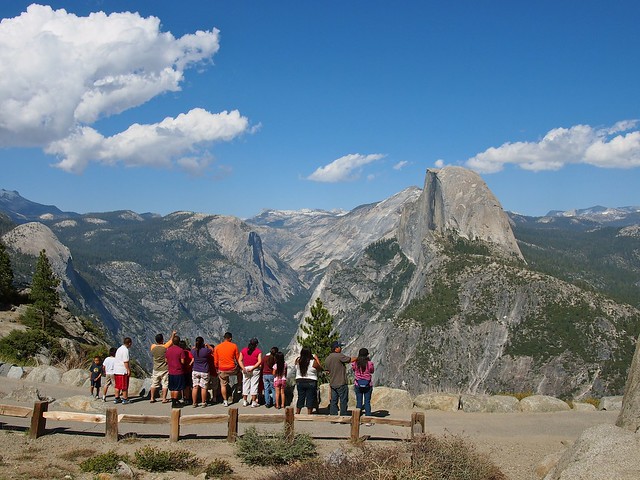 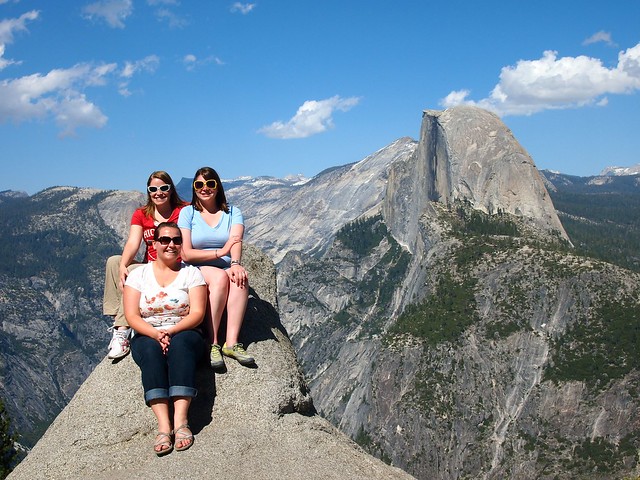 From Glacier Point, you get a fantastic view of Half Dome, as well as of Nevada Falls and the Valley Floor far, far below. 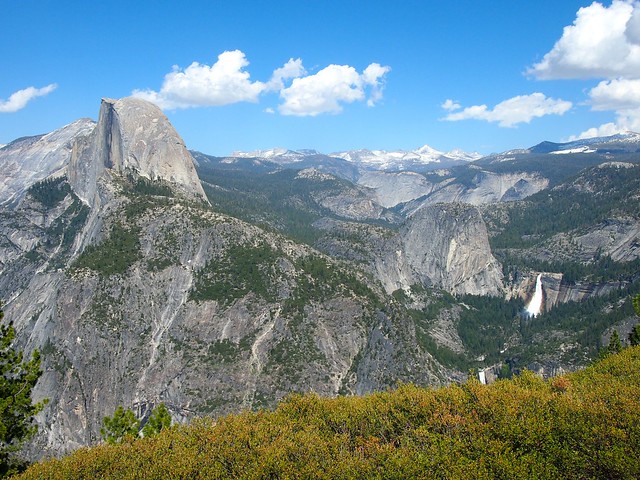 Even though many people associate Yosemite with Half Dome and Tunnel View, there's one other part of the park that is a must-see: Mariposa Grove. 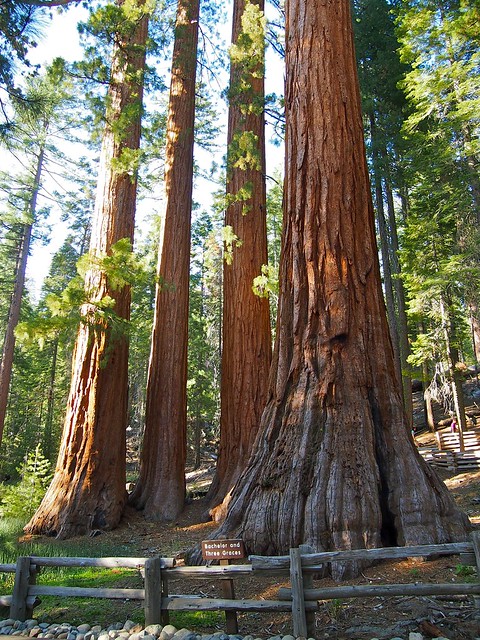 Another hour's drive from Glacier Point, Mariposa Grove is home to a large number of ancient Giant Sequoia trees. While you can do a tram tour here, too, in the summer, my suggestion is to just go it on your own and hike among these giants at your own pace.

Marvel at how big around these trees are, and be fascinated by the fact that their sap actually acts as a natural fire-repellant. 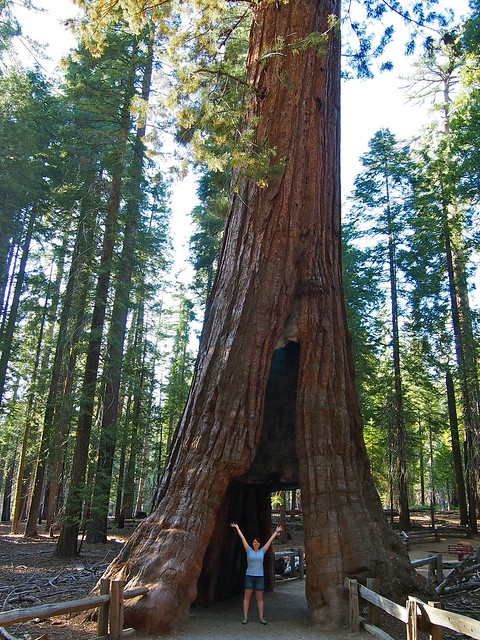 If you're pressed for time, some of the coolest trees can be reached within half an hour or 45 minutes on the trail. 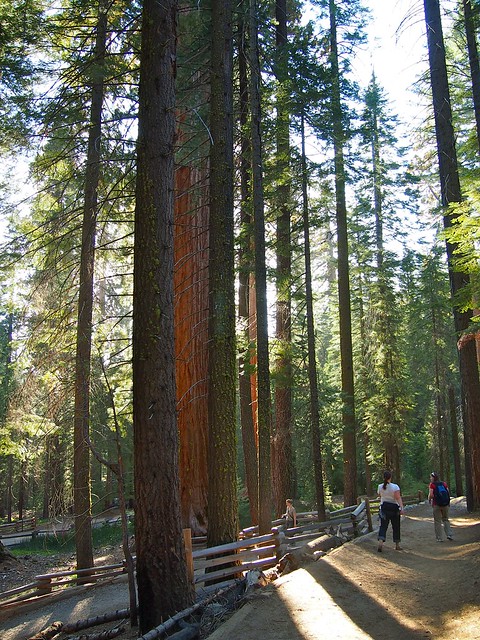 For a day trip to Yosemite in the warmer months, be sure to wear sunscreen, bring plenty of water (you will be at higher elevation, remember!), and wear layers. The Valley floor can be chilly in the morning, but can heat up quickly in the afternoon. And don't forget the good walking shoes!

Some of my favorite gear for a day trip like this includes: 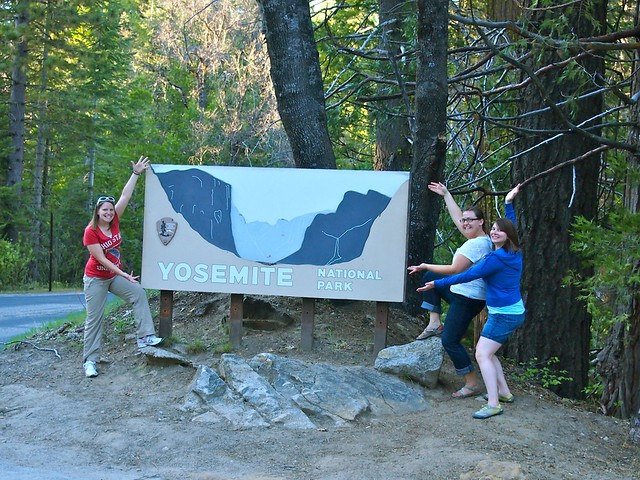 Where to stay in Yosemite

If you're planning to stay overnight in the park, be aware that you'll need to make reservations for a campsite, heated tent, or hotel room months in advance, regardless of the time of year that you'll be visiting.

A better bet is probably to book accommodation NEAR the park – like in Mariposa, Wawona, El Portal, Yosemite West, or Fish Camp. Some very well-reviewed hotels include: 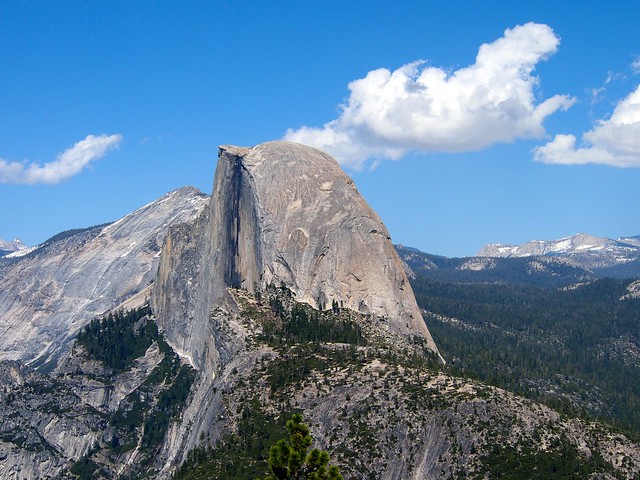 If you decide to camp within the park, do NOT bring food with you if you think you might forget to put it in a bear-safe container. While there are no grizzlies to worry about (they've been extinct in California for decades), black bears are a real concern and have excellent noses.


How to get around Yosemite

Once you're in the park — especially if it's during high season — park your car in a lot near the Visitor Center, and hop on the free Yosemite shuttles that traverse the Valley Floor and beyond. This is definitely the most stress-free way to get around the Valley Floor. 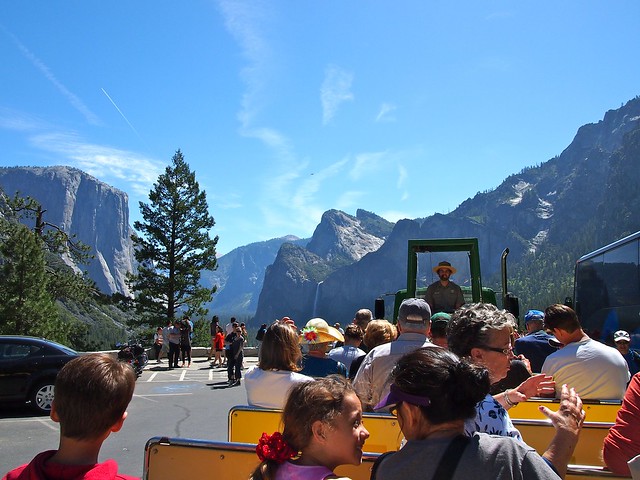 Are you interested in visiting Yosemite but don't have a car? There are day trips you can take from nearby towns, or even from San Francisco! Here are some of the best Yosemite day trips:

Now, I'm definitely not suggesting to only spend one day in Yosemite. There are tons of great hikes to tackle, and plenty of nature to enjoy beyond just the must-see sights. But, if one day is all you have, hopefully this post has given you an idea of what you can accomplish.

If you want to see more photos from this amazing park, check out my Yosemite photo essay.

Have you ever visited Yosemite National Park? If not, is it one your list? 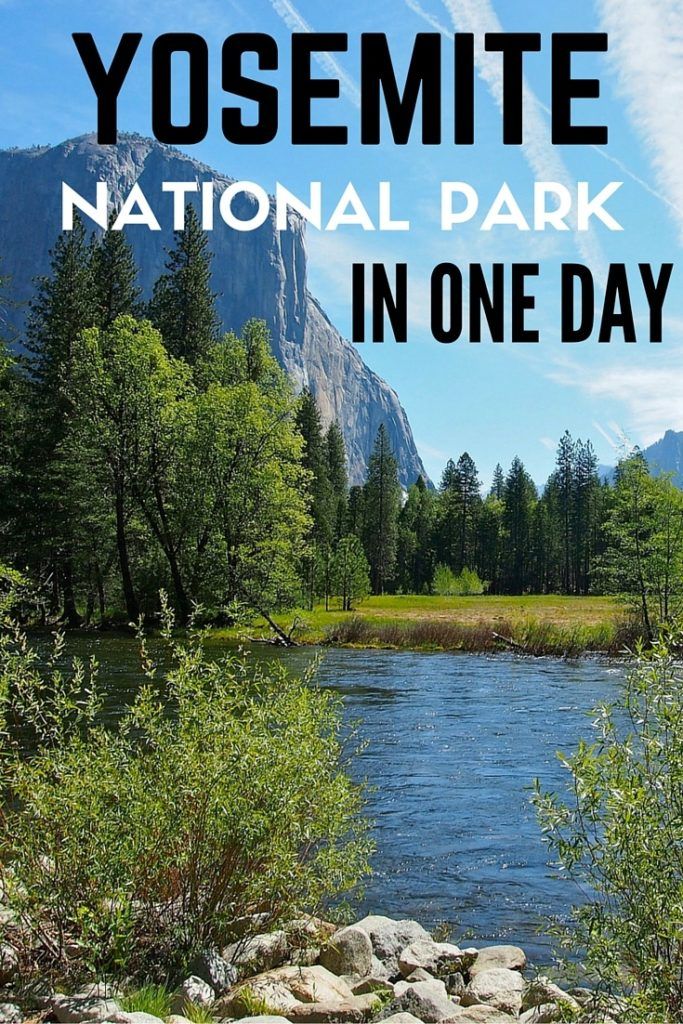