I grew up in a small town (population: less than 7,500). I went to a small high school, and then a small university in a similarly small town.

Small towns, as it turns out, are sort of my jam!

And while a lot of people aim to escape small-town life, small towns will always hold a special place in my heart. I love exploring big cities, but I find myself equally drawn to the smaller, often-overlooked corners of the world.

While visiting Ann Arbor, Michigan, a couple times last year, I also found myself in the nearby town of Ypsilanti. Ypsilanti is similar to Ann Arbor and is only about 20 minutes away – but it's unique enough that I felt like it deserved a post all of its own!

Note: I visited Ypsilanti as part of a paid ambassadorship with Wanderful and Destination Ann Arbor. As always, though, all opinions are 100% my own.

An introduction to Ypsi

Long before white settlers came to this part of the world, local Indigenous peoples used a trail near present-day Ypsilanti to cross the Huron River. It was used as a camping and trading ground for several Indigenous groups, including the Anishinabewaki, Potawatomi, and Meskwaki (Fox) peoples, among others.

In 1809, three French-Canadian fur traders established an official trading post in roughly the same spot beside the Huron River. In 1823, Major Thomas Woodruff established a permanent settlement nearby, which became known as Woodruff's Grove. Two years later, another settlement was established not far away and named Ypsilanti after Demetrios Ypsilantis, a hero in the Greek War of Independence.

What is Ypsilanti known for?

Ann Arbor is best-know for being home to the University of Michigan, which traces its history all the way back to 1817.

Ypsi has similar ties to a university – in 1849, a teacher training school known as the Michigan Normal School was established in Ypsilanti. This would eventually turn into Eastern Michigan University, which is still operating today, with an enrollment of around 19,000 students.

But for many years, Ypsilanti was best-known for its industry and manufacturing.

Ypsilanti was consistently home to automotive manufacturing companies, including the likes of Hudson Motors, Kaiser, Tucker and more. In 1941, Ford Motor Company built a big plant in Willow Run (just outside of Ypsilanti). The Willow Run plant was soon converted to wartime production when the U.S. entered WWII, and produced B-24 bombers at a rate of roughly one per hour.

I visited Ypsilanti for the first time during a local craft festival that had a Rosie the Riveter theme, and got to meet four “real Rosies” – women who worked on the assembly line at the Willow Run plant back in the 1940s. It's such a fascinating history, and one you can learn more about if you visit Ypsi.

Things to do in Ypsilanti, Michigan

Today, you can enjoy a visit to Ypsilanti whether you love classic cars, good music, craft beer, outdoor activities, or just shopping at quirky local shops.

Here are all the unique things to do in Ypsilanti, Michigan:

1. Shop and eat in the historic district

Fun fact for you: Ypsilanti is home to the second-largest connected historic district in Michigan. This district includes downtown Ypsi along Michigan Ave., and the area near Frog Island and Riverside parks that's simply known as “Depot Town” because of the railroad depot there.

These two parts of town are divided by the Huron River and Riverside Park, but each is worth exploring for quirky shops and good food.

Along Michigan Ave. in downtown Ypsi, some shops worth checking out include:

Some must-visit shops in Depot Town include:

Restaurants and bars to try in Depot Town include Sidetrack Bar and Grill, Aubree's Pizzeria & Grill, MAIZ Mexican Cantina, and 734 Brewing Company (for craft beer). You can also visit Hyperion Coffee Co for some caffeine, and the Ypsi Farmer's Market on Saturday mornings from late June through October.

2. Grab a coffee or beer at Cultivate

I didn't include Cultivate in the list of restaurants/bars above because I feel like this multi-use space deserves a section of its own.

On the surface, Cultivate Coffee And Tap House is part coffee shop and part tap house – the name says that much. But once you visit, you realize that it's a whole vibe. With a beer garden out back, a vegetable garden, and (normally) a calendar of events to enjoy, Cultivate is truly a space for the whole community to enjoy.

From its beginnings, Cultivate has focused on things like sustainability and giving back to the community. They call it “social entrepreneurship,” and since opening have donated lots of food from their garden, and over $100,000 in funds to community nonprofits.

This is an excellent spot to spend either a rainy day or a warm summer evening. I am partial to their lattes, but the also have an extensive craft beer list.

As I mentioned earlier, Ypsilanti has a long history with the automotive industry. If you want to learn more about it (and see some really cool old cars in the process), then you'll want to visit the Ypsilanti Automotive Heritage Museum.

Located in what was once the longest-operating Hudson Motor Car dealership, the museum now shows off cars made by Hudson Motors, Kaiser, and Tucker – many of them made at the old Willow Run Plant.

This museum is packed full of shiny old cars, plus a fair bit to read about Ypsi's automotive history. Admission to the museum is only $5 (with kids under 12 free), so it's definitely worth an hour or so of your time. Just note that the museum is only open from 1-4 p.m. Tuesday-Sunday.

In the summer, the museum also hosts several different car shows and events, including “Cruise Nights” where residents show off their classic cars along the streets in Depot Town.

4. Get up close with history at the Yankee Air Museum

I've talked a lot about the Willow Run Plant in this post (the one that manufactured cars, but also famously made bombers during WWII), so you might be curious as to whether you can tour the old plant.

Well, you can't really visit Willow Run itself. But you CAN visit the adjacent Yankee Air Museum, which is probably even cooler. This Smithsonian-affiliated aerospace and science museum is chock full of cool things to see and do.

There are exhibits about the history of aviation, real historic planes to see and learn about, and hands-on exhibits, including one where you can learn to “Rivet Like a Rosie.” The museum and nearby Willow Run Airport also host the annual Thunder Over Michigan Air Show.

But the coolest thing you can do at the Yankee Air Museum is take a flight in one of five historic planes. Hop into a B-17 or B-25 bomber, or maybe a UH-1 Huey for a true aerial adventure.

The Yankee Air Museum is just a 15-minute drive away from Ypsilanti, and is open Tuesday-Sunday year-round. Museum admission is $12 for adults and $8 for kids, while flights on the historic planes range anywhere from $100-$475 per person – learn more about those flights here.

Other museum you can visit in the Ypsilanti area include the Ypsilanti Historical Museum (housed in a Victorian mansion built in 1860), and the Michigan Firehouse Museum.

Ypsilanti is located in Michigan's Washtenaw County, which is home to more than 23,000 acres of public land. Ypsilanti has Riverside Park and Frog Island Park right in town, which are connected to one another by a bridge. Both parks have trails and picnic areas to enjoy.

The Huron River runs right through Ypsilanti, too, offering up activities to enjoy like kayaking and fishing.

Ypsilanti is also connected to Ann Arbor and other areas by the Border-to-Border Trail, which currently consists of 40 miles of paved trails perfect for walking or biking.

Ypsilanti has actually become known for its summer festivals, especially in the Depot Town area and surrounding parks.

A few annual festivals to look out for include:

And this of course isn't an exhaustive list, either! I've only visited Ypsi twice, so don't pretend to be an expert. But I enjoyed both my visits, and would say that if you're going to be in the Ann Arbor area anyway, you should definitely pop over to Ypsilanti, too, for at least half a day.

Want to read more about this part of Michigan? Here are all my posts about Ann Arbor:

Have you ever heard of Ypsilanti? Is it a place you'd like to visit? 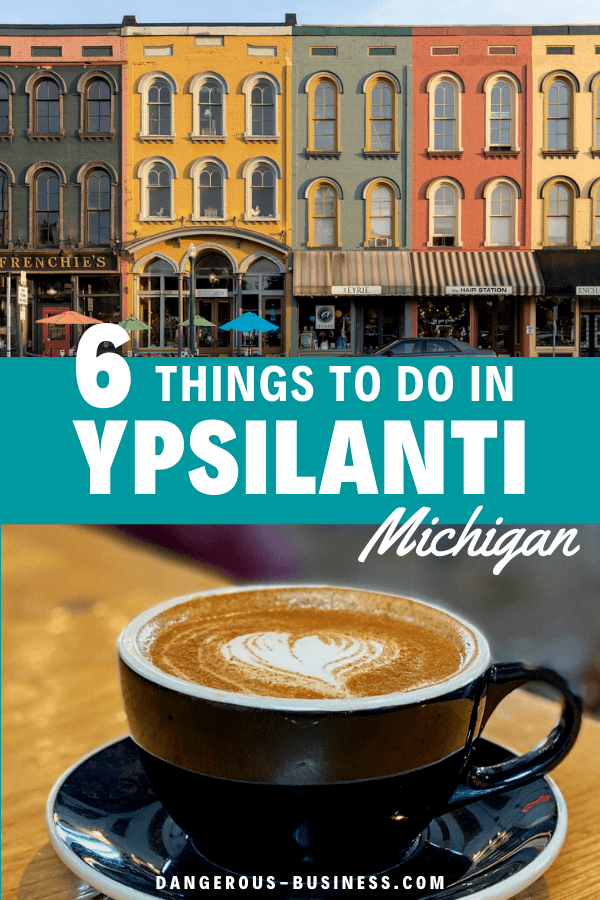 7 Comments on “Small Town America: Getting to Know Ypsilanti, Michigan”