5 Reasons to Visit Ann Arbor, Michigan (That Have Nothing to Do with College Football)

Home » United States » Michigan » 5 Reasons to Visit Ann Arbor, Michigan (That Have Nothing to Do with College Football)

Growing up in Ohio where everyone assumes we're all Ohio State fans (spoiler alert: I'm really not), it's basically required knowledge that Ann Arbor is home to the University of Michigan.

The University of Michigan is home to nearly 45,000 students, but the city of Ann Arbor is home to roughly 122,000 – meaning there's more to this Michigan city than just the UofM.

On a recent trip to Ann Arbor, I made it my mission to get to know the city beyond its famous university. Because, even though Michigan Stadium is the largest football stadium in America (yes, really), not everyone is a football fan (shocking, I know).

Note: This post was written in partnership with Wanderful and Destination Ann Arbor, who I'm currently an ambassador for! As always, though, all opinions are 100% my own.

Ann Arbor was founded in 1824 by a pair of land speculators, before Michigan was even a state. The town became the seat of Washtenaw County just three years later in 1827, and was incorporated by 1833. Ann Arbor lost a bid to become Michigan's state capital, but instead became the new home of the University of Michigan in 1837 after the university moved away from Detroit.

The rest, as they say, is history – and in fact the history of Ann Arbor and the University of Michigan has been closely linked since 1837.

In the 1960s and 70s, Ann Arbor became a focal point for political activism (especially among left-wing liberals), which I think has influenced the city to this day.

Here are 5 reasons you should consider a visit to Ann Arbor (that have nothing to do with college football).

Downtown Ann Arbor is unlike any “college town” I've ever visited or lived in before. Instead of dive bars and fast food joints, Ann Arbor's downtown is home to historic theaters, vintage clothing shops, independent bookstores, street art, a couple craft breweries, and lots of unique restaurants.

Ann Arbor has a creative, youthful vibe, but without feeling like your stereotypical university town. There's a reason that it's consistently named among the most livable cities in America.

RELATED: Get to Know the Quirky Side of Ann Arbor

The thing I love most about Ann Arbor is the number of independent shops and restaurants that are still thriving there. There are independent record shops and book stores, vintage clothing stores and spots selling antiques, cute bakeries and non-chain coffee shops.

There's a culture of encouraging makers and creativity here, and this is definitely reflected in so many locally-owned businesses. You can spend a whole day popping in and out of shops and still probably not visit them all.

Some favorites of mine include:

When I went to university, the college town I lived in was filled with fast food joints (we all remember the Pizza Hut-Taco Bell combo, right?), dive bars, and campus-run cafes. There were few unique independent restaurants.

In Ann Arbor, though, it's the opposite. Instead of McDonald's, there's a Cuban fast food joint. Instead of nothing but dive bars, there are craft breweries and speakeasy-style cocktail bars. Instead of an endless supply of Starbucks, there are independent coffee and tea shops.

If you consider yourself to be a foodie, then you'll love Ann Arbor.

Some not-to-miss places include:

4. Nature is never far away

Ann Arbor is situated on the Huron River, and has been nicknamed “Tree Town” due to its abundance of green space. Even downtown Ann Arbor is filled with trees.

And if you want to get away from the pavement? There are several options. You can go for a paddle down the Huron River, or do what I did and escape for a few hours to the Nichols Arboretum.

The Nichols Arboretum is a 123-acre arboretum owned by the University of Michigan. The arboretum is home to hundreds of plant and tree species (including the largest peony garden in North America), along with miles of walking and hiking trails. You'd never guess you were near a city of 120,000+ people here.

The University of Michigan also runs the Matthaei Botanical Gardens, which contains 300 acres of gardens. I'll need to get there on my next trip!

5. It's always been home to progressive thinkers

Ann Arbor basically legalized cannabis in the 1970s, and was very openly opposed to the Vietnam War. In 1960, presidential hopeful Senator John F. Kennedy launched the Peace Corps in a late-night speech on the steps of the Michigan Union.

I'm sure a lot of this has to do with the University of Michigan and the propensity for college students to be slightly more progressive, but it's spilled over beyond the campus and influenced Ann Arbor as a whole.

If you're like me and have always assumed that Ann Arbor was just “another” college town, it's time to re-visit those preconceived notions. Ann Arbor as a city is undeniably tied to the University of Michigan – but it's so much more than just campus life and football games.

After one visit to Ann Arbor, I'm already planning my next!

Have you ever visited a “college town” and been pleasantly surprised? Who's ready to visit Ann Arbor? 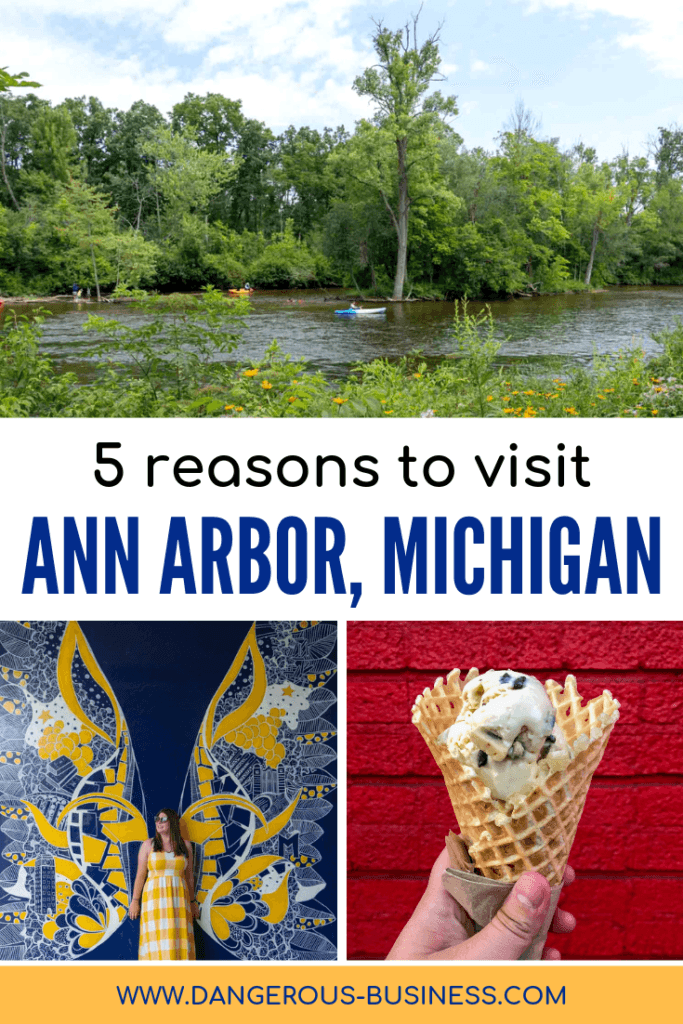 11 Comments on “5 Reasons to Visit Ann Arbor, Michigan (That Have Nothing to Do with College Football)”