The Day I ALMOST Swam With Sharks

Ever since I started following the Discovery Channel’s “Shark Week” ages ago, I’ve been sort of fascinated by sharks — these sharp-toothed, oft-misunderstood creatures of the deep that are fodder for TV specials and horror films alike.

I realize that sharks are, in fact, wild animals, and that they can be very dangerous.

When I decided I was going to Hawaii, I began researching what sorts of activities Hawaiian tourism had to offer. Sure, there was the typical snorkeling, bus tours and surfing lessons. But one activity in particular caught my eye — shark encounters.

After reading up on Hawaii Shark Encounters in Haleiwa on Oahu’s North Shore, I decided I couldn’t possibly leave Hawaii without jumping into the ocean with some local sharks. 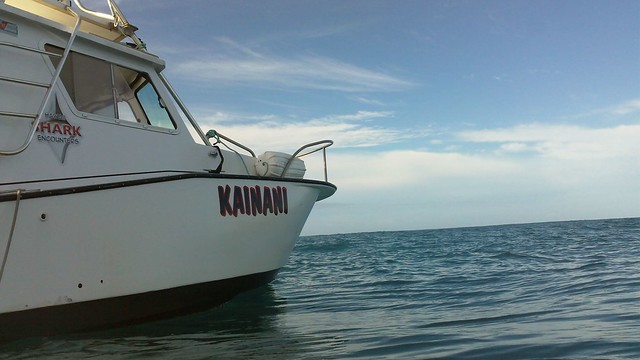 Hawaii isn’t generally home to any Great Whites — in fact, only a few have ever been sighted in the state’s warm waters — but I wasn’t going to be picky. Getting up-close-and-personal with any breed of shark would suffice, as far as I was concerned.

Book your own shark cage diving tour in Hawaii.

I was up before 5 a.m. on my last day in Honolulu in order to catch an early-morning bus that would take me to the North Shore town of Haleiwa, out of which Hawaii Shark Encounters operates. I had originally been booked on a tour earlier in the week, but bad weather necessitated rescheduling.

Secretly, I was glad for the change in date. While I didn’t love the 2-hour bus ride before the sun was fully up, I did love arriving in North Shore under a brilliantly blue sky, which I wouldn’t have enjoyed on my originally scheduled day. 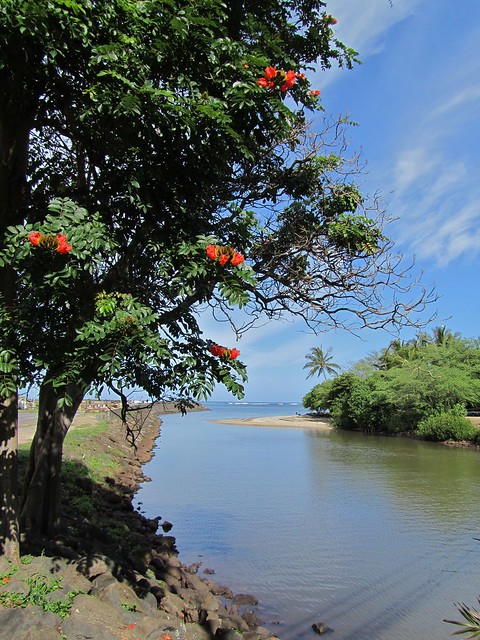 In short, it was a perfect day to jump into shark-infested waters.

Except, as my tour group headed out around 8:30 a.m. in a small boat, we learned that the waters were not as shark-infested as we had hoped.

In fact, our guides said that shark sightings had been scarce for the past week, for reasons that they couldn’t really explain. Their theories ranged from the fact that it was the Humpback whale birthing season in the area (which meant possible new food sources for the local sharks), to the possibility of a Great White in the area (which would scare the local sharks away for a week or two).

Whatever the explanation, it was clear that we might not actually get to see any sharks at all.

We skimmed across the ocean in the 32-foot Kainani for roughly 15 minutes, eventually arriving at Hawaii Shark Encounters’ diving cage, which is anchored in 600 feet of deep blue Pacific water. 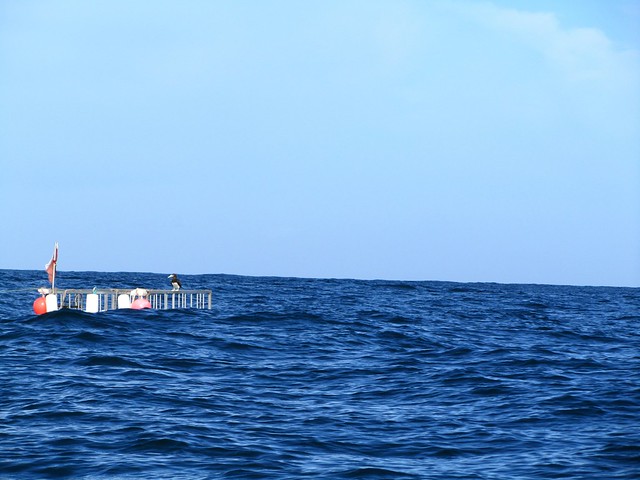 Our very knowledgeable guides described to us the types of sharks you can sometimes see in this area — mostly Sandbar and Galapagos sharks, with the occasional Tiger shark thrown in. Even without the probability of seeing any Great Whites, the prospects of seeing any of these large sharks was thrilling.

However, looking out over the side of the boat and into the dive cage, things didn’t seem so exciting. 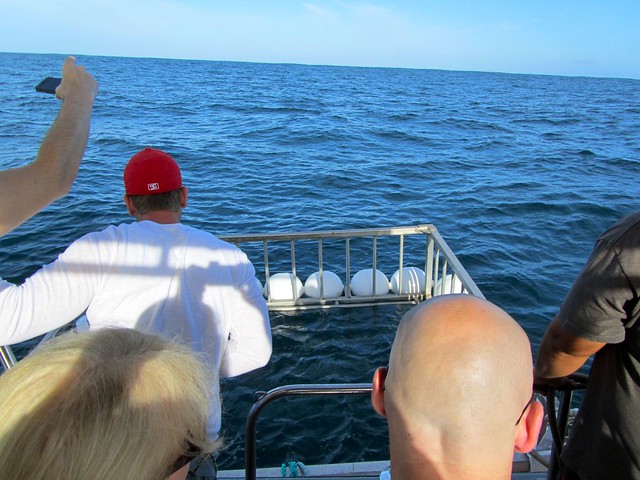 After bobbing in the water for about 10 minutes (and I mean BOBBING — be sure to take motion sickness drugs before this tour if you’re prone to it), we had seen no sign of any sharks.

Our guides suggested we have a go in the cage anyway, and the first group of 6 clambered over the side of the boat and into the chilly water, masks and snorkels firmly in place. 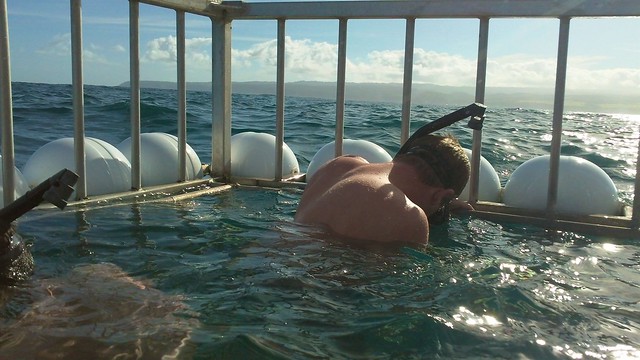 There were a total of 12 of us on this tour, which meant that two groups of 6 would get roughly 20 minutes each of cage time. Which would have been great, if there had been anything to see.

But the sharks never came.

In fact, the only thing we saw the whole time were two tiny little fish swimming in and out of the cage between the bars. 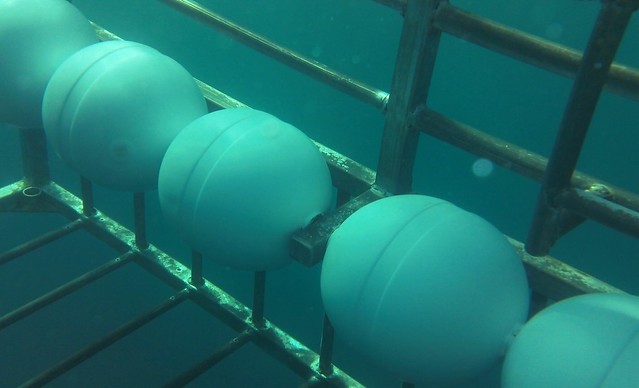 We had been warned that this could happen, of course. But I know, as we floated in the cage squinting out into the open water, we were all secretly holding out hope that the sharks would magically appear.

One or two people in the cage joked that we should ignore the laws that prohibit chumming and throw out some fish to tempt the sharp-toothed ocean dwellers. But Hawaii Shark Encounters is all about playing by the eco-friendly rules, and so these suggestions were not taken seriously.

The guides decided before long that the sharks weren’t likely to show up. Each group spent perhaps 10 minutes in the cage before climbing back out again. Our only consolation upon coming out of the disappointing, chilly water was the warm freshwater shower we received to help us warm up and wash the salt off.

But our adventure wasn’t over yet.

We may not have seen any sharks, but we were out in Hawaiian waters during one of the best times for whale-watching. 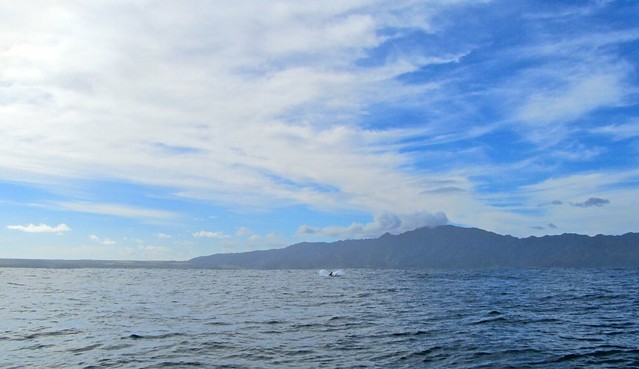 From December to early May, Humpback whales call the waters around Hawaii home. Many females come to the area during this time of year to give birth, so whale sightings are not uncommon.

On our way back to shore, we were entertained by a newborn Humpback breaching repeatedly out of the gently-rolling water. Again and again, this little (and I use the word “little” here lightly, because it was huge!) whale would propel itself almost all the way out of the water and then fall back down with a splash.

It was really cool. I’ve always wanted to see a whale do that.

We passed at least one other whale-watching boat on our way back in, and stopped to watch a few other adult whales swimming by. You could see water spouts — the telltale sign of whales clearing their blowholes — in just about every direction.

The whales somewhat made up for the lack of sharks, and our tour guides were kind enough to seek out some of these gentle giants for us to see before returning to the harbor.

And the best part? Since we didn’t see any sharks on our excursion, nobody was charged for the tour. Hawaii Shark Encounters guarantees that you’ll see at least one shark on their watch, so, if you don’t, you don’t pay a thing.

The way I look at it, we got a gorgeous boat ride, a lesson on sharks, and a mini whale-watching tour for free in beautiful North Shore, Hawaii.

I couldn’t ask for a better way to start my morning.

Good news! I did finally get to see sharks up close in South Africa; read about it here.

And if you want to book a similar tour in Hawaii, this one is the same one I did!

Have you ever gone cage diving with sharks? If not, is it something you’d like to do someday?

Disclaimer: Hawaii Shark Encounters offered me a complimentary tour during my visit. But this fact in no way influenced my review or story. As always, I would never suggest something to you that I didn’t enjoy or believe in. There are many things you can buy, but my opinions aren’t one of them.

36 Comments on “The Day I ALMOST Swam With Sharks”