The Bohemian Side of Paris

Home » Europe » France » The Bohemian Side of Paris

The Jardin du Luxembourg in Paris, France, is also often referred to as “the gardens of seduction,” or “the lovers' gardens.” The story goes that if a single girl sits down on a bench here, it will take less than 4 minutes and 30 seconds for a man to come and ask her out on a date.

And no, I did not test it out.

But, strolling through the colorful Italian-style gardens in Paris' 6th arrondissement, it's not that far of a stretch to believe that it could be true. 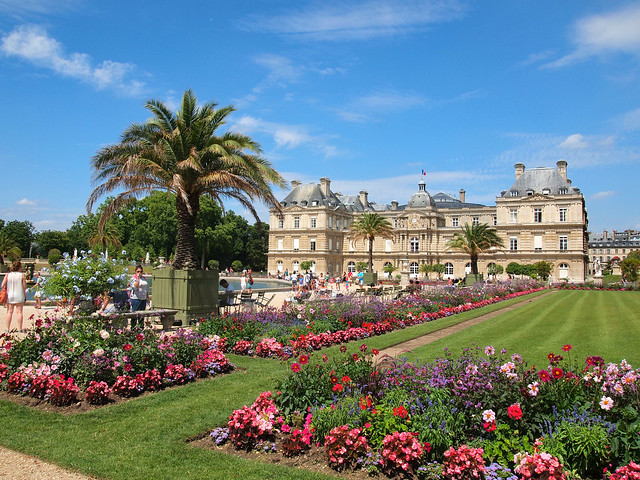 Paris is a massive city. It has 20 different arrondissements (districts, or neighborhoods), and, much like in San Francisco, each one is slightly different from the next. Even areas WITHIN each arrondissement can often vary wildly in terms of the vibe you'll find there. While I enjoyed the classically artsy vibe of Montmartre, I wanted to experience other Paris neighborhoods, too.

Because, let's get real here — Paris is MUCH more than just the Eiffel Tower and the Mona Lisa. 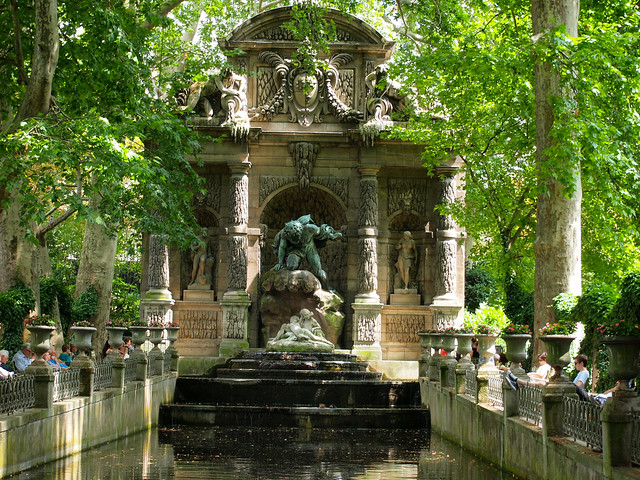 Much like Montmartre, some of Paris' most interesting areas today at one point were separate villages outside the borders of Paris. Saint-Germain-des-Pres, for example, used to be a poor village on the outskirts of the city. Just like in Montmartre, artists and writers and other Bohemian types eventually flocked here, giving the area a young population and a reputation as a party spot.

Existentialist philosophers like Paul Sartre and Simone de Beauvoir called this area home. The “Lost Generation” too was drawn to this part of Paris — writers like Hemingway and Fitzgerald could often be found sipping coffee (and other, stronger drinks) at cafes in Saint-Germain.

Today (again, much like Montmartre), this picturesque part of Paris is one of the most expensive to live in. 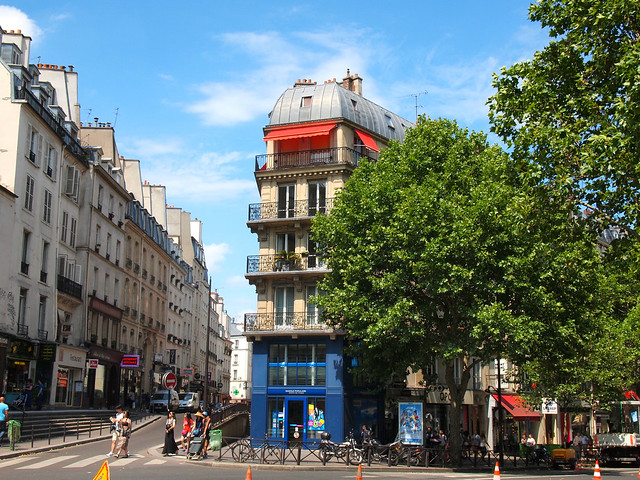 Not far from Saint-Germain lie some of Paris' most touristy spots — like Saint-Michel and Notre Dame. Saint-Michel is a maze of overpriced restaurants and souvenir shops, and the Notre Dame Cathedral often has lines that wrap around the building.

But there are still plenty of interesting things nearby if you know where to look.

Down a little side street near a cafe is the place where the guillotine was invented — a killing machine that was actually used to execute people in France up until 1977, if you can believe it.

Also nearby is the Pont des Arts bridge, which connects the French Institute — where the French language is guarded and “preserved” — and the Louvre. It's also where you can find thousands of love locks attached to the bridge. Here, lovers write or carve their initials on a padlock, lock it to the bridge, and then toss the key into the Seine, thus sealing their love forever.

I wonder if any of them met in the Jardin du Luxembourg? 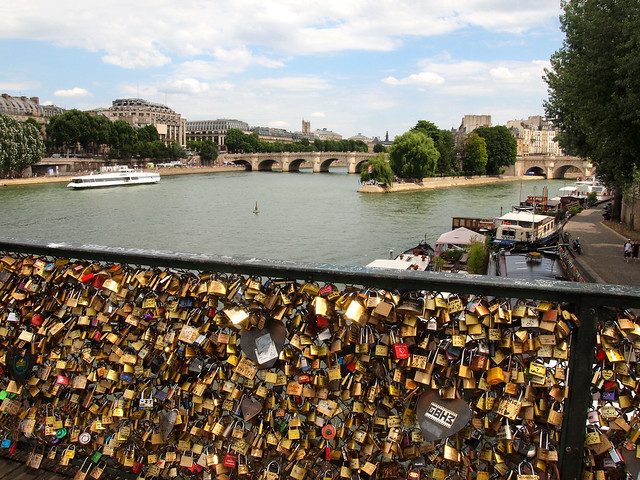 Tucked down a little alley near the Pont Nuef bridge (the “New Bridge” which is ironically the oldest in Paris since it was the first bridge in the city made of stone) you can have cheese and smoked meats and play a game of pétanque (similar to bocce ball) in a quiet little square. 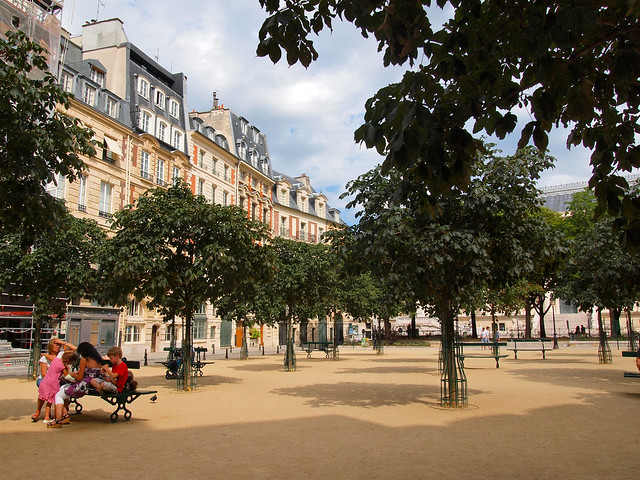 Ending up back at Notre Dame, it's like a shock to the system. The place is almost always thronging with people (especially in the summer months).

It's almost ironic, really. At one point, the church was on the verge of being torn down. It was only the popularity of Victor Hugo's book (yes, that one) that saved it and turned it into the tourist attraction that it is today. 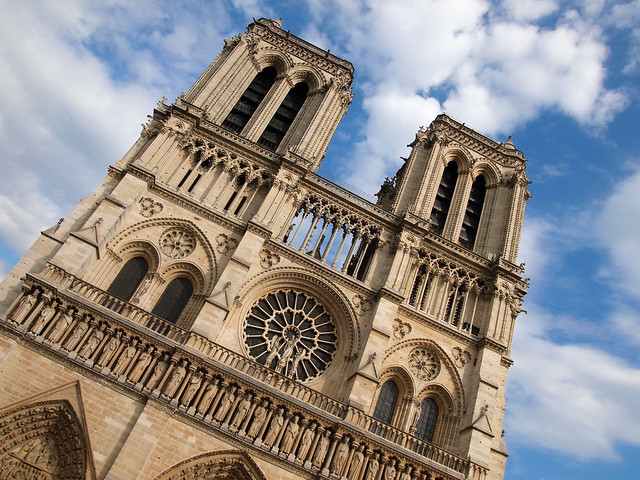 Across the river, though, there's one last nod to the Bohemian inhabitants that originally made this part of Paris so romantic and desirable. With books spilling out onto the sidewalk (and tourists even more so) the Shakespeare and Company bookstore is probably the only part of Saint-Michel that I really loved.

With a nod to the old tradition of carrying English-language books and promoting the work of new writers who would work in the store in return for their books being sold there, Shakespeare and Company still feels special.

It's not the original shop opened by Sylvia Beach in 1919 (that store was closed during the German occupation of Paris in WWII and never reopened), but it hosts things like poetry readings and writers' workshops today, catering to the “new” Lost Generation in Paris. 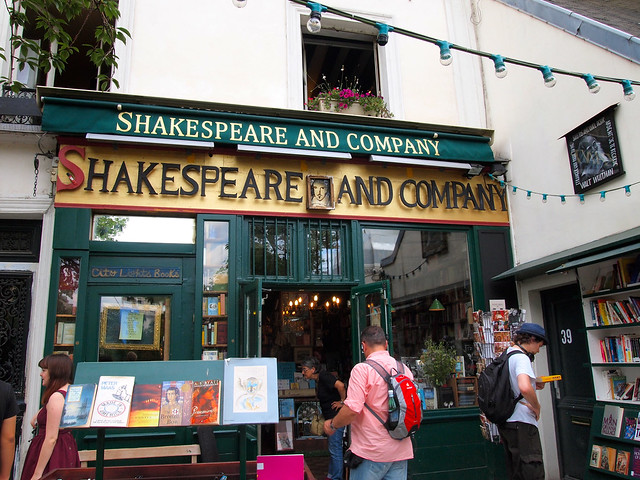 While the typical tourist spots in Paris are unarguably iconic and worth seeing, it's the glimpses into the other, less-well-known parts of Paris that were my favorite.

Yes, seeing the Eiffel Tower sparkle at night and the traffic zipping around the Arc de Triomphe was special. But reading lovers' names on the Pont des Arts, hearing stories in the Jardin du Luxembourg, and playing a friendly game of pétanque will be the sorts of things I remember most fondly about my first trip to Paris.

All of the things mentioned in this post were seen on a tour of “Bohemian Paris” with Urban Adventures. This was my attempt at a slightly different sort of tour review — hopefully one that has you more interested in some other neighborhoods of Paris!

What do you think of the alternative side of Paris?

*Note: Not only do I need to thank Urban Adventures for this cool walking tour, but a shoutout also goes out to Go With Oh for providing me with my accommodation in Paris.

29 Comments on “The Bohemian Side of Paris”