Swimming with Manatees in Crystal River: A Florida Must-Do

I remember when I first heard of manatees.

It was sometime in elementary school, when we were talking about endangered species and what that meant. I was more concerned about the gray wolves (and would go on to be obsessed with them for a few years before I hit my horse phase in middle school), but I remember thinking manatees sounded pretty cool, too.

Some fun facts to prove their coolness:

This last fact means that, during the winter months, the manatees that call the waters in and around the Gulf of Mexico home often have to seek warmer spots if they want to survive. Because, even though most people associate places like Florida and Alabama with hot, tropical weather, the reality is that it can get quite chilly there during the winter – especially at night.

Hence why the natural springs around Crystal River, Florida, are jam-packed with manatees each and every winter.

With so many manatees in the area (especially during the colder months), manatee snorkeling tours have become increasingly popular in Crystal River. And, after having swum recently with dolphins and fur seals, I figured I may as well add manatees to my list!

I was staying at The Plantation on Crystal River (a beautiful historic hotel right on the canal), and the hotel has its own dive shop/marina right on site. And they, of course, do manatee tours.

I showed up at 6:30 a.m. while it was still dark and climbed into a 5mm wetsuit (not an easy feat). I then watched a manatee safety video with my 10 tour mates before climbing into a boat in the fog with Captain Ed.

The video stressed the importance of “passive observation” – the ideal way to interact with any sort of wildlife. In the case of swimming with manatees, this means not chasing the animals or approaching them in any way.

Basically (much like when I swam with fur seals in New Zealand), you're told to lay still in the water and let the manatees come to you.

Because, while the video stresses that you shouldn't poke, prod, step on, or otherwise touch the wild manatees at all, the animals have not had the same “passive observation” briefing.

This was made evident as soon as we got in the water just around the corner from the Plantation. It was not guaranteed that we were going to see any manatees at all since the Florida weather had warmed up a lot in late March and the manatees had already left the springs dotted throughout King's Bay. But we found two resident manatees hanging out around the docks – a mother named V and her two-year-old calf.

Captain Ed got in the water first to confirm that the manatees were going to stick around. The animals have terrible eyesight, but they make up for it with other senses – they know you're in the water once you get within about 10 feet of them.

Ed soon motioned us all in, and we doggy-paddled/floated over in the direction of the manatees. What I saw when I got there was incredible – the baby manatee (which Ed later told us that he's known since it was born) swam right up to Ed and gave him a hug.

And I'm not just saying that – the manatee literally swam up, grabbed Ed's arm with his flippers, and pulled the captain in for a snuggle.

Then the manatee rolled over in the water, begging for belly rubs.

We stayed with V and her baby for nearly an hour, floating around with big grins on our faces and watching as the manatees ate, came up for air, and generally just went about their everyday lives.

Other than the first greeting the baby gave Captain Ed, the manatees seemed perfectly content to ignore us. V even pushed a couple of us out of the way when she wanted to munch on a different spot of vegetation.

It was pretty cool to be so close to these gentle giants – and that's really what they are. They don't have teeth except molars for grinding, and yet they can grow up to about 13 feet long, and can easily weigh up to 1,200 pounds.

V was at least 10 feet long, and Ed said she was probably somewhere in her 40s. She's one of the “resident” manatees in Crystal River, meaning she often hangs out in the canals and nearby waterways, even when she doesn't need the warm water.

Soon a few other boats came by to visit the manatees, so our group packed up and headed to our next stop: Three Sisters Springs.

In the really cold months, it's here at Three Sisters that hundreds upon hundreds of manatees gather. During “manatee season” (generally mid-November to late March), areas are roped off for the manatees, and boats are not allowed in the area.

Unfortunately there were no manatees left in Three Sisters when I was there – but it was still SO worth a visit. The water was crystal clear and tinted a beautiful blue color, and it was neat to be able to float over the natural springs.

If I were a manatee, I would totally want to spend the winter here.

As it was, we were the first tour group into the springs, meaning we had plenty of time to swim around and enjoy it.

I'm determined to come back next year, though, when there will be some manatees around!

Should you swim with manatees?

Before going on this tour, I definitely wrestled with the “Is it responsible?” question that I always face whenever any sort of animal “encounter” is involved. So many animal-related tours out there do more harm than good to the animals.

And, indeed, manatee tourism in and around Crystal River is not without its controversy.

As I mentioned earlier, manatees have no natural predators and are very curious creatures. This can be both good and bad. It's great for people who want to have a manatee encounter. But it's not always great for the manatees.

First of all, their curiosity, slow pace, and tendency to be hanging out near the water's surface means that many manatees have unfortunate run-ins with boats every year. And, with more and more people moving to coastal regions and manatee tourism increasing, this only means more boats.

Boat-related deaths account for about 20 percent of all manatee deaths each year, and more manatees die from human-related activity like getting caught in fishing nets/line and drowning, or eating rubbish that's been thrown into the water and getting sick (they aren't like sharks; they don't take a “test” bite of potential food – they eat first and ask questions later).

So of course I had to do my research before participating in any sort of manatee tour.

Luckily, all the tour companies in Crystal River are strictly regulated, volunteers police the manatee sanctuaries when they're full, and visitors are always encouraged to practice passive observation.

In fact, after experiencing it for myself, I would argue that it's better for the manatees when people visit them in tour groups. Because then at least they are educated about how to interact with the manatees and respect their habitat. (People who roll up to the springs in their own boats on Spring Break looking to have a good time and pet some manatees, on the other hand…)

Plus, I'm a firm believer that once you have an experience like this, you automatically become somewhat of an advocate for the animals.

And the good news is that the increase in manatee tourism hasn't hurt the manatees whatsoever. In fact, Florida counted a record number of manatees in 2018 – over 8,800 of them! Florida's manatees also were taken off the endangered list in 2017 and re-classified as “threatened.” Which is definitely good news.

I loved my morning with the manatees, and am already plotting my return trip next winter!

I went on a manatee snorkel tour through The Plantation on Crystal River. Tours last about 3.5 hours and cost $55 per person. The price includes a 5mm wetsuit, mask and snorkel, a dry towel, and coffee/hot chocolate on the boat.

Tip: If you go outside of “manatee season,” go on a tour as early in the morning as you can, as you have a better chance of seeing some local “resident” manatees earlier in the morning.

Or check out a manatee swimming tour through Viator instead.

READ NEXT: 5 Awesome Things to do in Crystal River, Florida

Would YOU want to swim with manatees?

*Note: I was a guest of the Plantation on Crystal River, and received a complimentary manatee swimming tour. As always, though, all opinions are 100% my own. 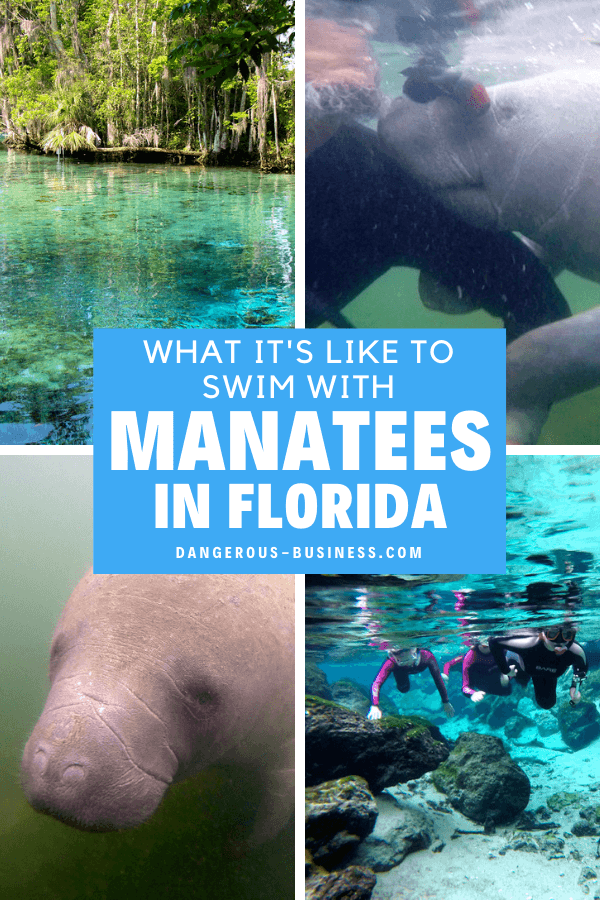 73 Comments on “Swimming with Manatees in Crystal River: A Florida Must-Do”