Sagrada Familia: You’ve Never Seen a Church Like This Before

Home » Europe » Spain » Sagrada Familia: You’ve Never Seen a Church Like This Before

Once upon a time, a man named Antoni Gaudi decided he wanted to build a church.

But this wouldn't be just any church. No, this church would have gnarled towers and towering stained glass windows and giant turtles would hold up its pillars. In short, this would be unlike any other church anywhere in the world. 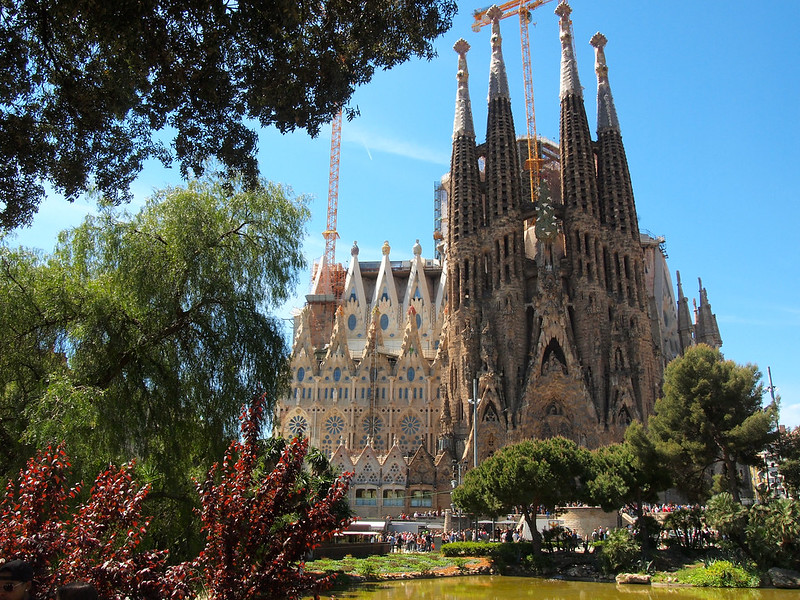 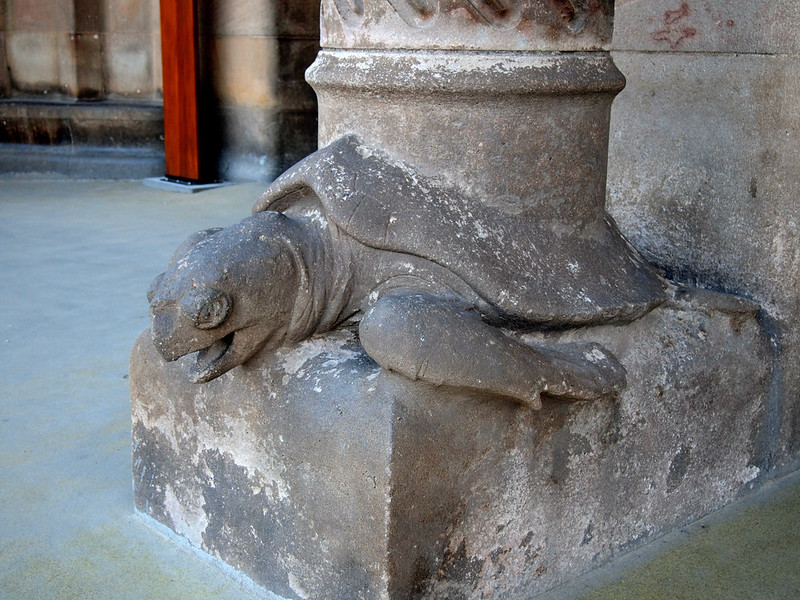 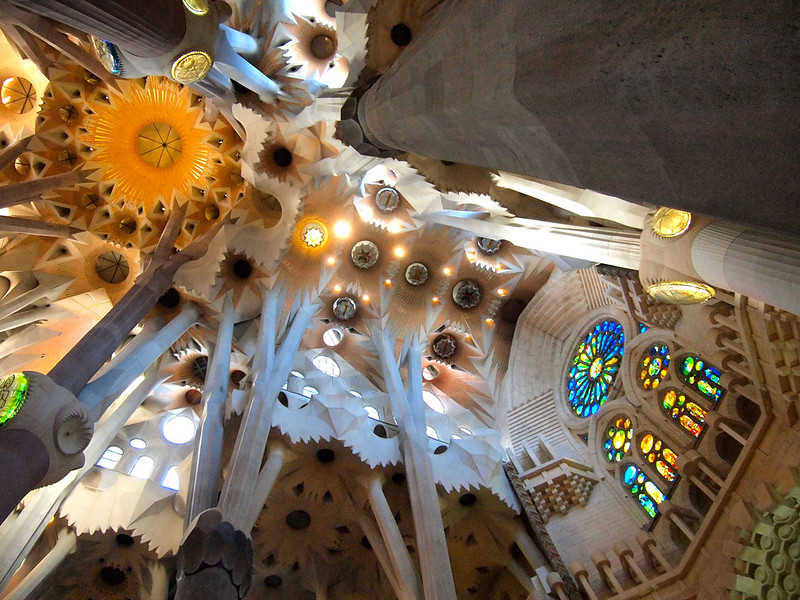 In 1883, Gaudi, Barcelona's foremost and possibly most creative modernist architect, got involved in work on the Sagrada Familia (or, more correctly, Basílica i Temple Expiatori de la Sagrada Família). He dedicated the rest of his life to the design and construction of this Roman Catholic masterpiece – to the point where he spent the last couple of decades of his life living in the church's crypt.

Gaudi had always been a religious man, but many say his obsession with the Sagrada Familia made him go a little mad. He worked on the church for more than 40 years before he died tragically in 1926 from injuries suffered in a tram accident. The church wasn't even 25% complete. 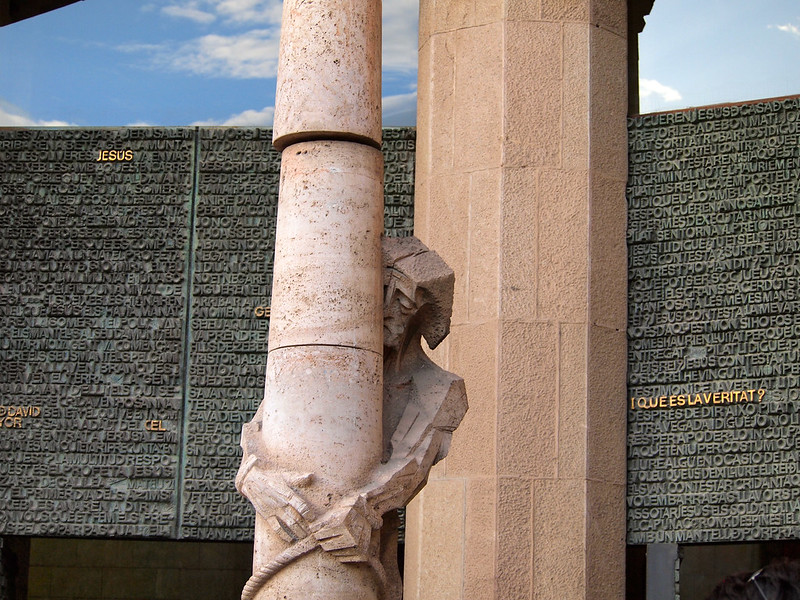 Today, nearly 90 years later, the church STILL isn't complete. Crews have been working off Gaudi's original designs ever since his death, but progress is slow. After all, it's kind of hard to follow in the footsteps of one of the world's most creative (and perhaps a little crazy) architects. 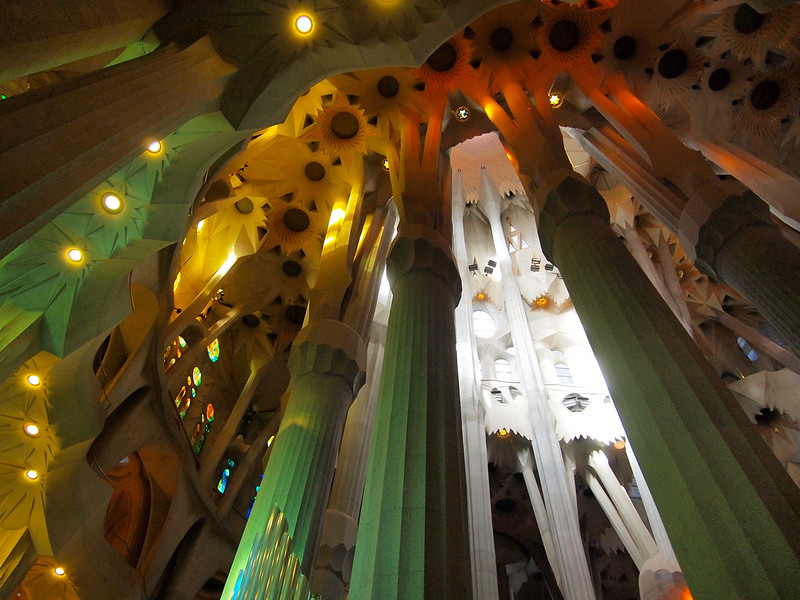 When you first see the Sagrada Familia from the outside (and, really, if you're in the area you really can't miss it), the first thing that will strike you is probably its odd exterior – and how it looks entirely different depending on which side you're looking at.

The church currently has two facades – the Nativity Facade and the Passion Facade. The Nativity Facade was completed by Gaudi himself, in a typically unique (AKA really freaking weird) style. From afar, it just looks really bumpy. But up close, it's almost like it's melting or perhaps made out of mud. 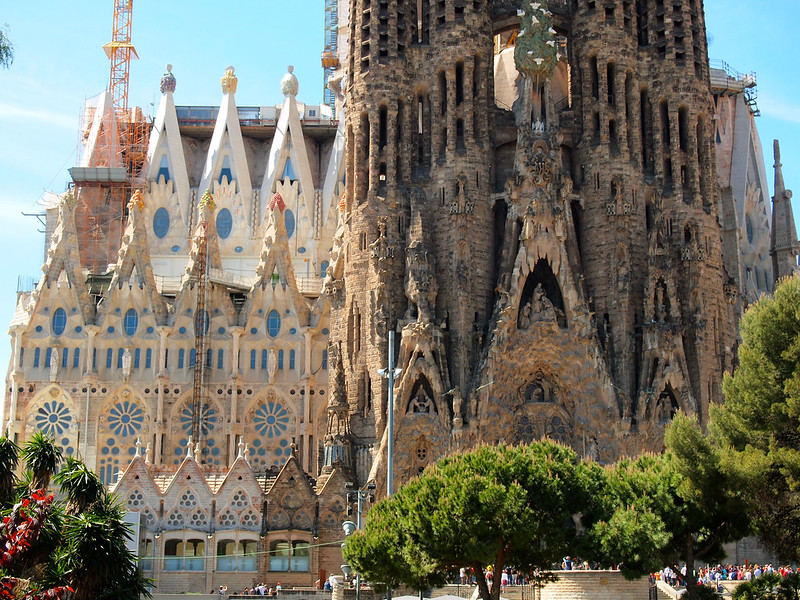 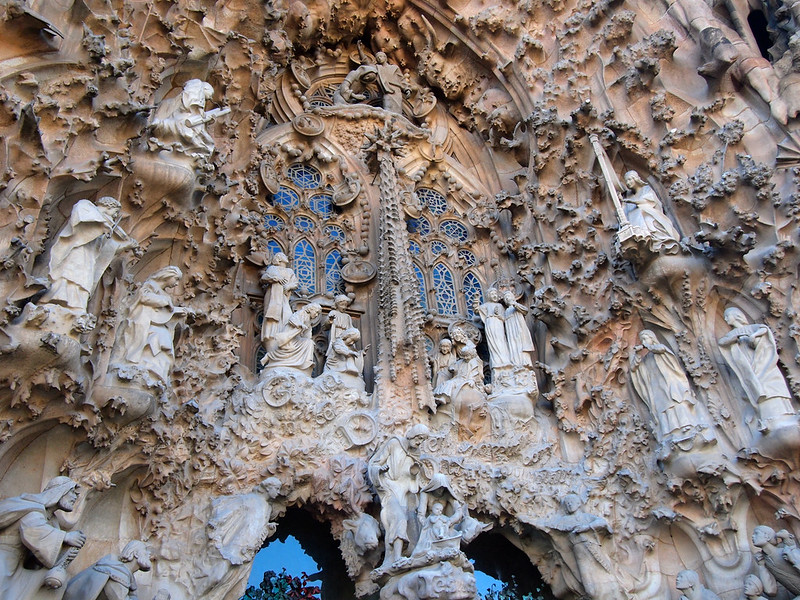 Walk around to the Passion Facade, however (which is still being worked on), and you'll see a completely different style of architecture, characterized by very straight lines and sharp angles. 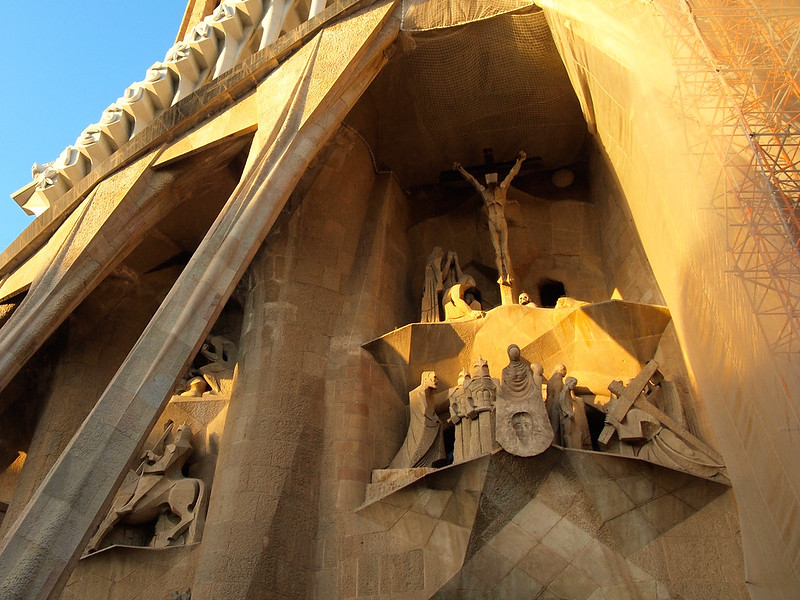 Both are definitely interesting, but I'll be perfectly honest with you: I think the outside of the Sagrada Familia is kind of hideous. Cool as hell, don't get me wrong, but definitely not what I would call “pretty.”

Inside, however? The inside of the Sagrada Familia is nothing short of incredible. 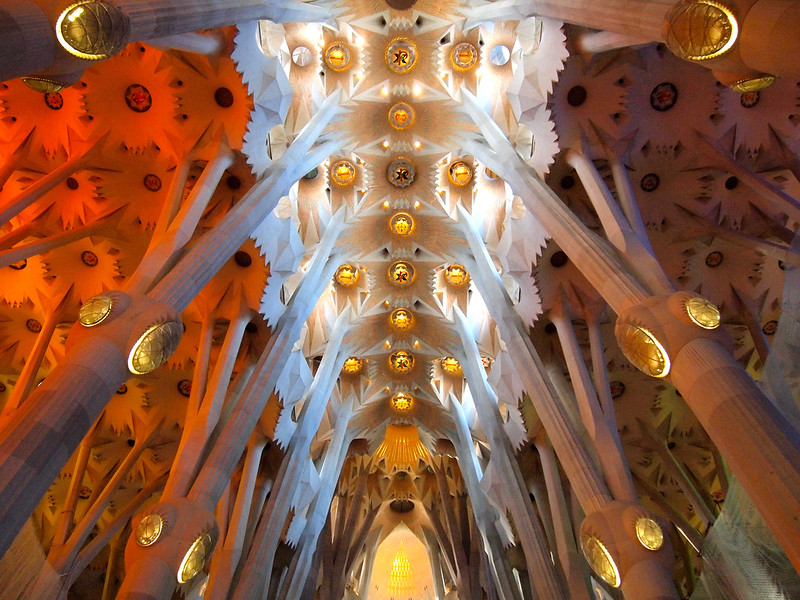 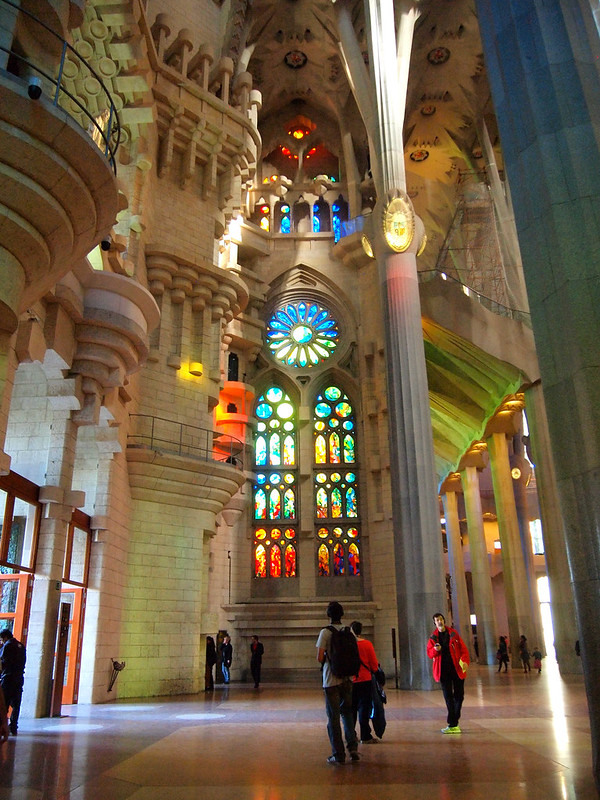 The first thing you'll notice when you walk inside is the sheer HEIGHT of the ceilings inside the nave. Massive pillars stretch from floor to ceiling, absolutely dwarfing every human inside. On two of the main outer walls, ginormous stained glass windows paint the church's interior in different shades of greens, blues, reds, and yellows. 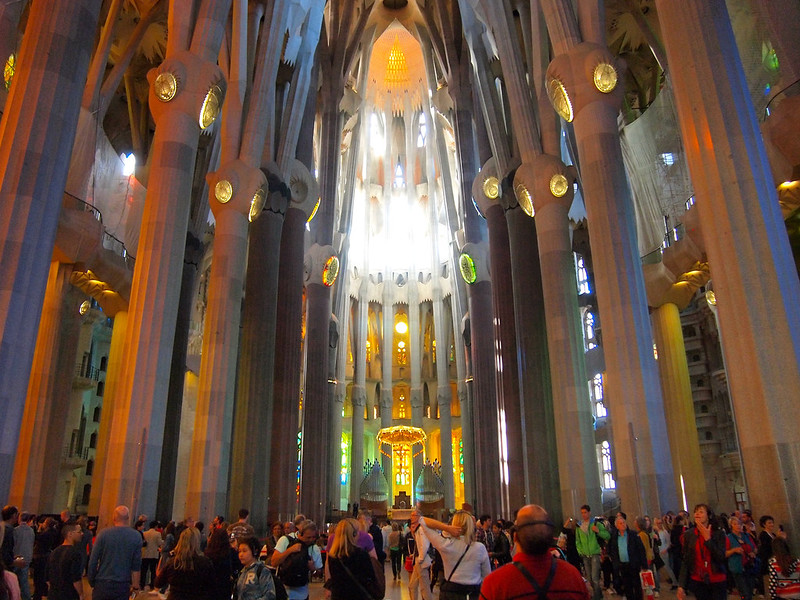 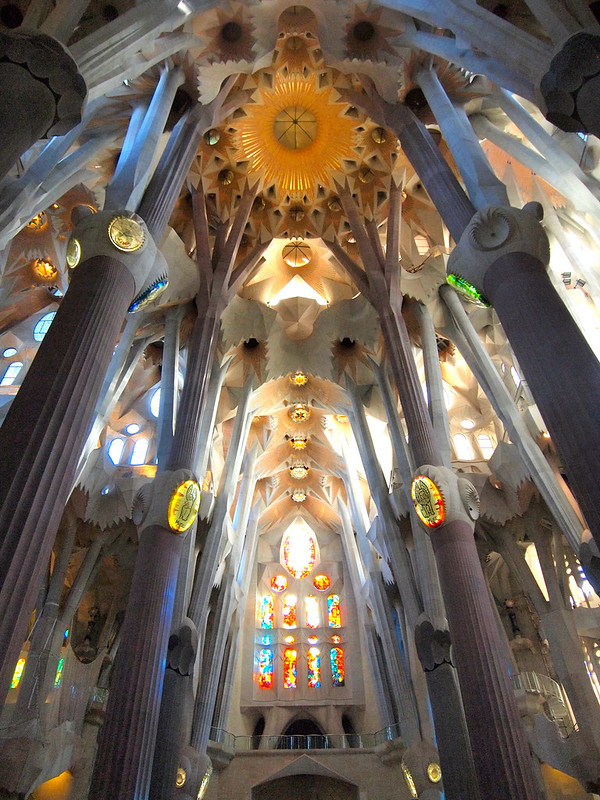 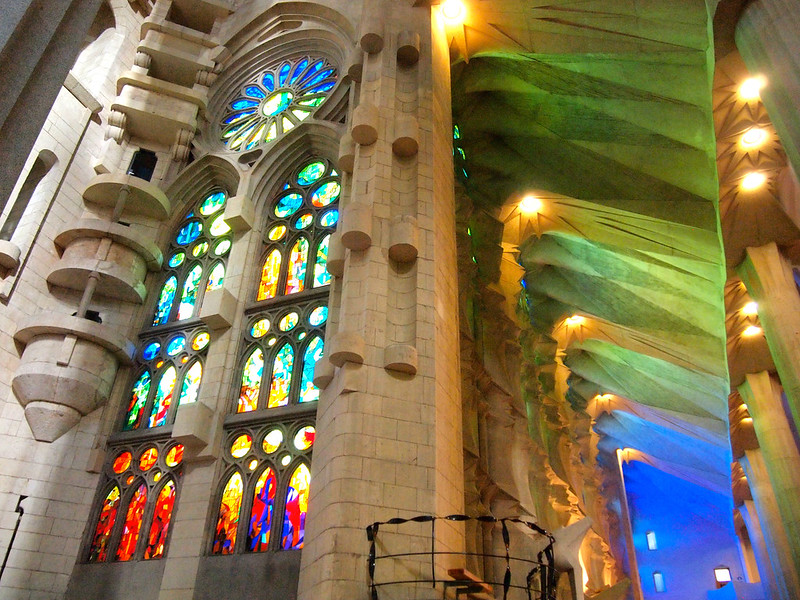 I visited in the early evening, when the sun was streaming in through the red and yellow windows, making the inside of the church look like it was on fire. 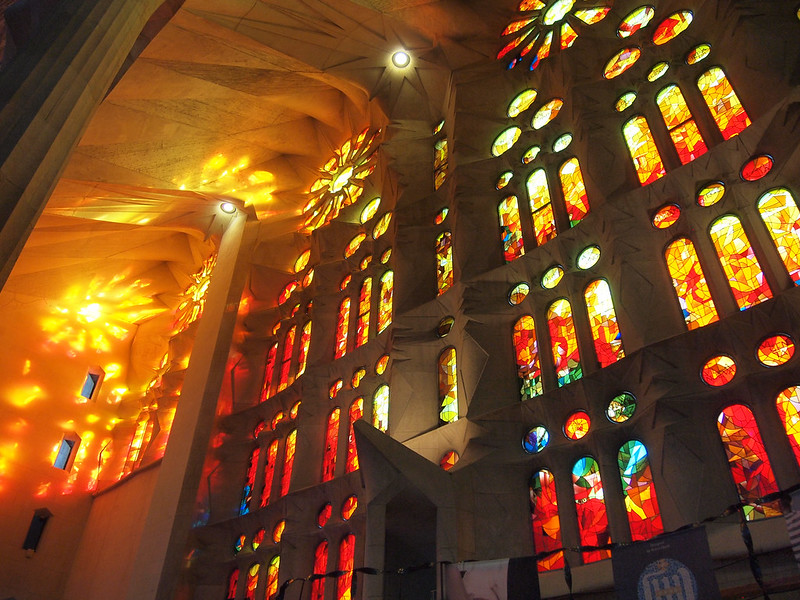 Very rarely am I speechless about a place, but the inside of the Sagrada Familia came pretty close to rendering me unable to form coherent thoughts as I roamed around, slack-jawed, completely awed by the beauty in this architecture. 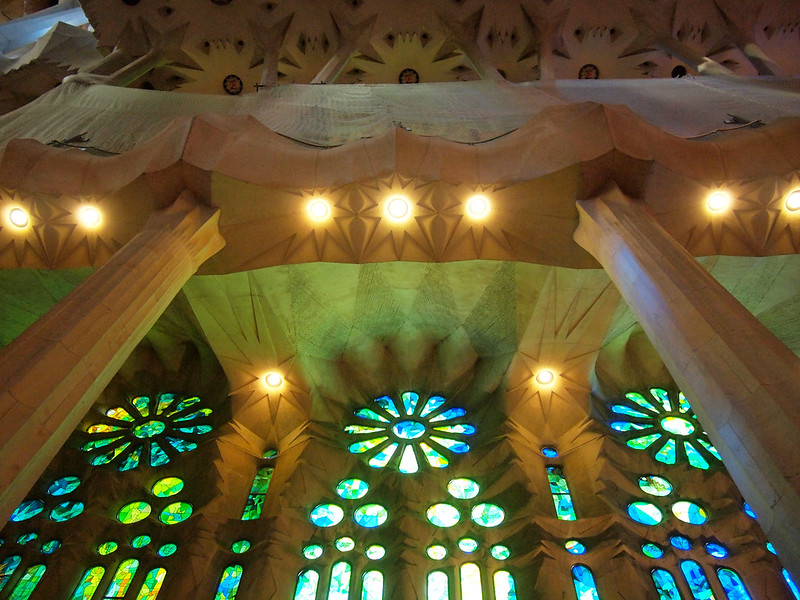 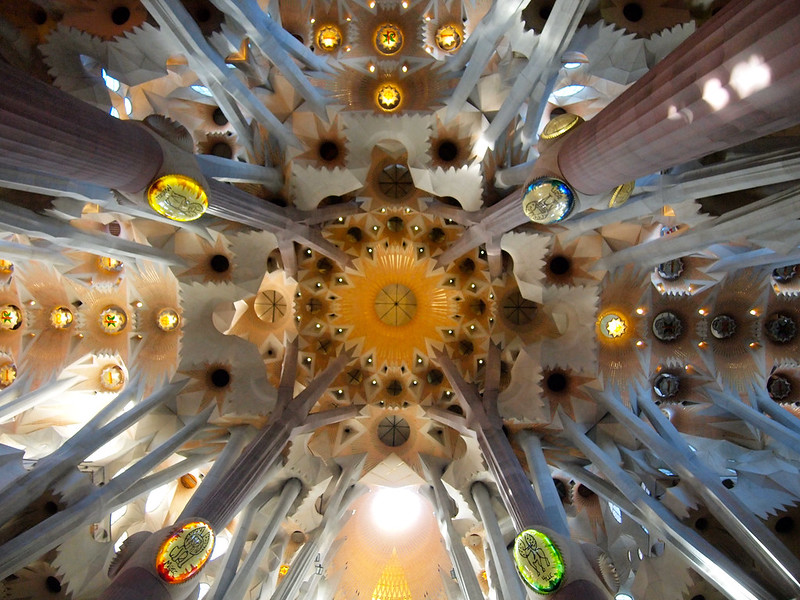 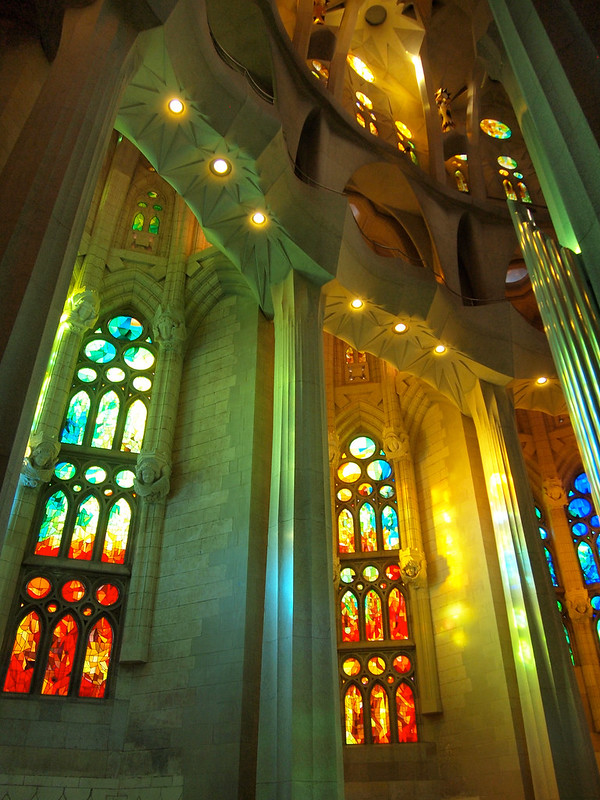 I spent at least an hour in the interior of the church, walking circles and noticing new intricate details on each lap. 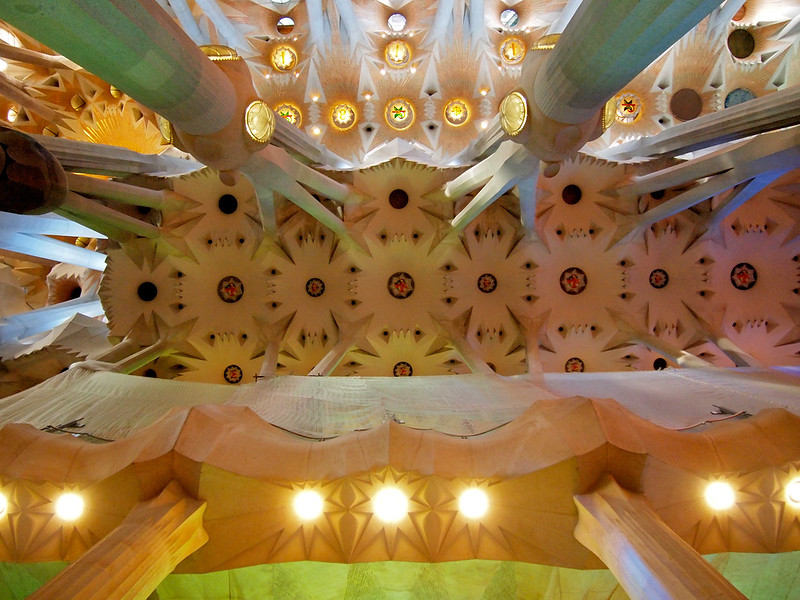 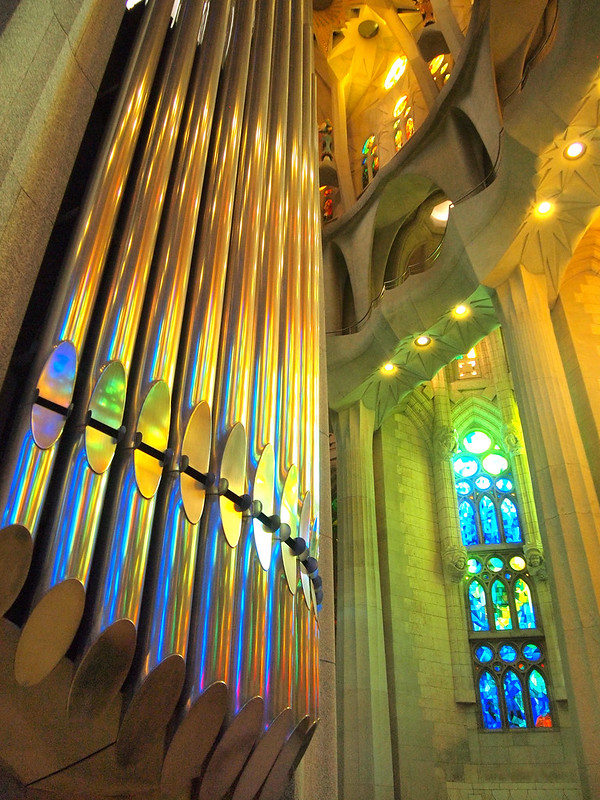 Eventually, though, it was time to head to the towers on the Nativity Facade side of the church – I was going up.

The original design of the Sagrada Familia calls for 18 towers in total. At present, there are only 8. But, on most days, you can buy tickets to go up into some of them. I chose to visit the Nativity Facade simply because those were the towers with availability when I pre-booked my ticket online. Tower visits are regulated, and often sell out by the end of the day. 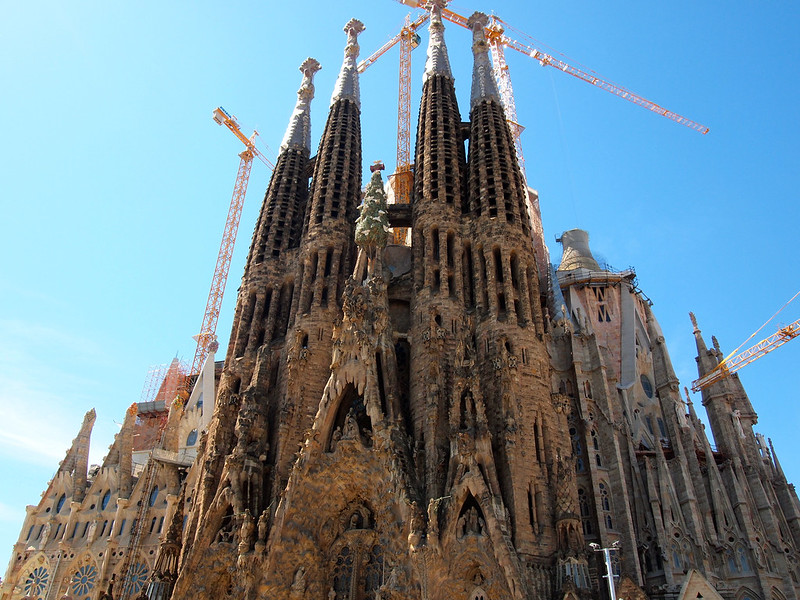 Going up included a quick elevator ride, some time to take in the view out over Barcelona, and then a walk down a series of dizzying spiral staircases to get back to the main part of the church. 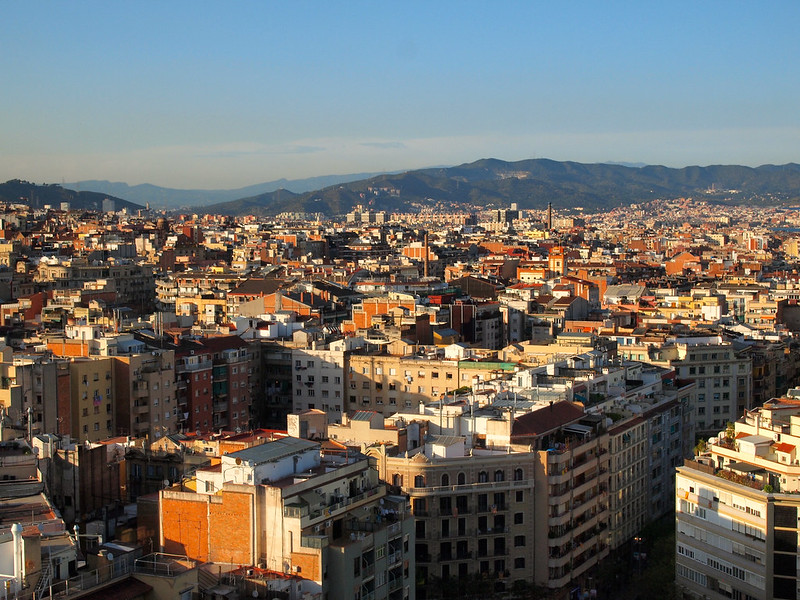 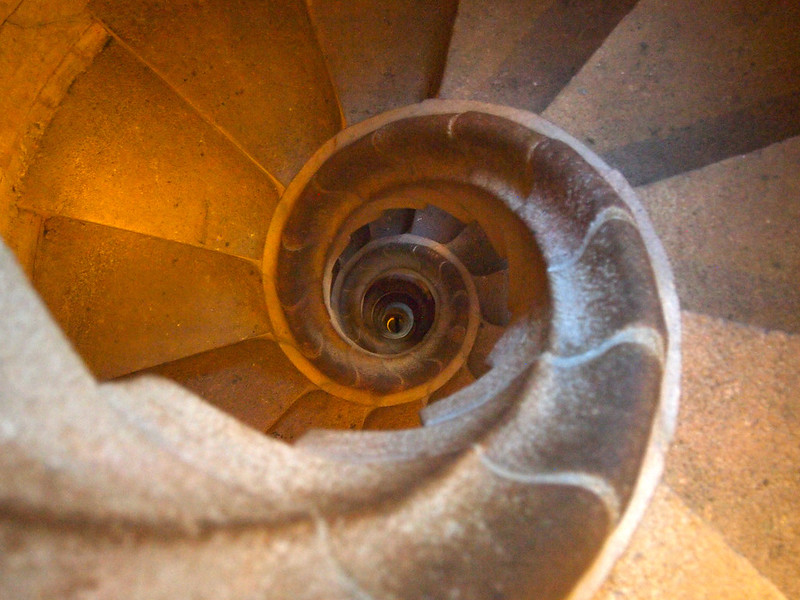 For and extra 4.5 Euro, I thought this was definitely worth it. It gave a completely different perspective of the church, and allowed you to get up-close with some of the architecture that Gaudi himself executed. 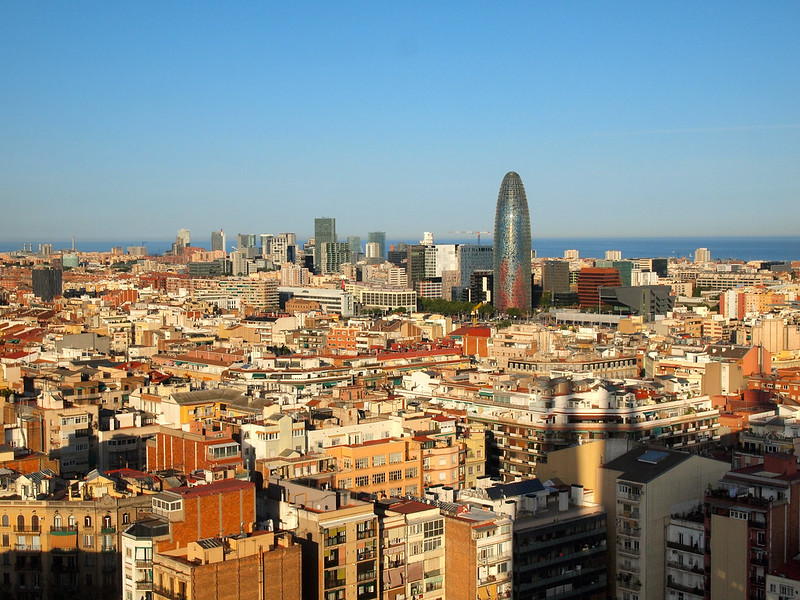 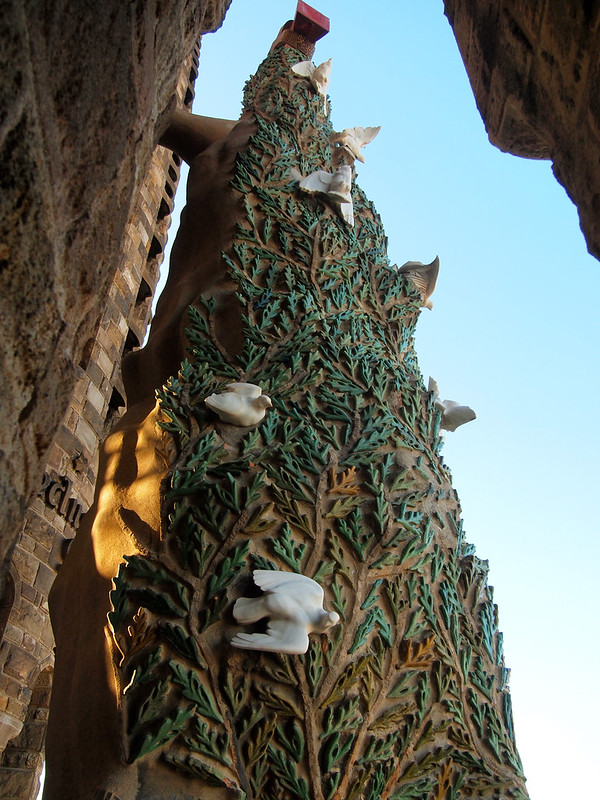 My last stop in Sagrada Familia was the Schools building. This was a school originally designed by Gaudi in 1909 for the children of the church's construction workers. Today, the building now houses an exhibition about the history of Sagrada Familia and Gaudi's designs. 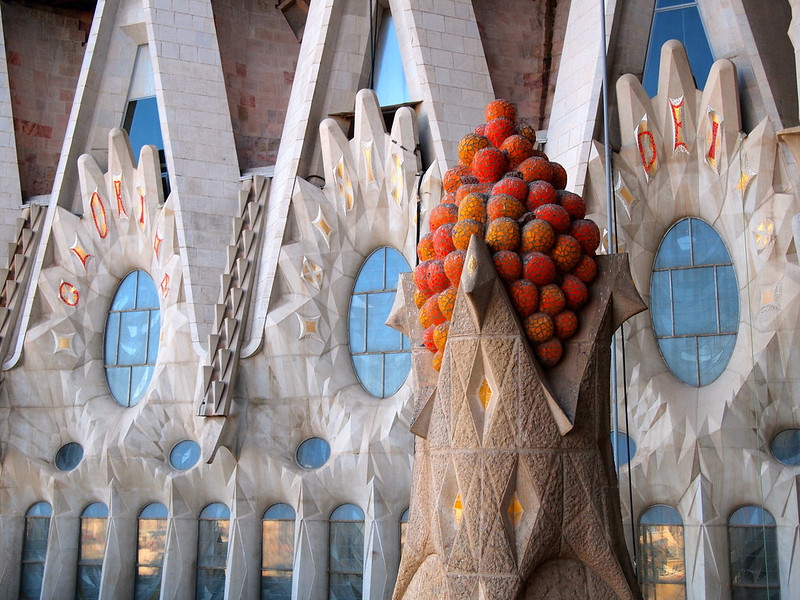 I spent more than two hours total inside Sagrada Familia, and it was only the fact that it was closing time that convinced me to leave.

No matter how many churches, cathedrals, and basilicas you've seen throughout Europe and the rest of the world, I promise that you have never seen one like the Sagrada Familia.

It's definitely a must-see in Barcelona! 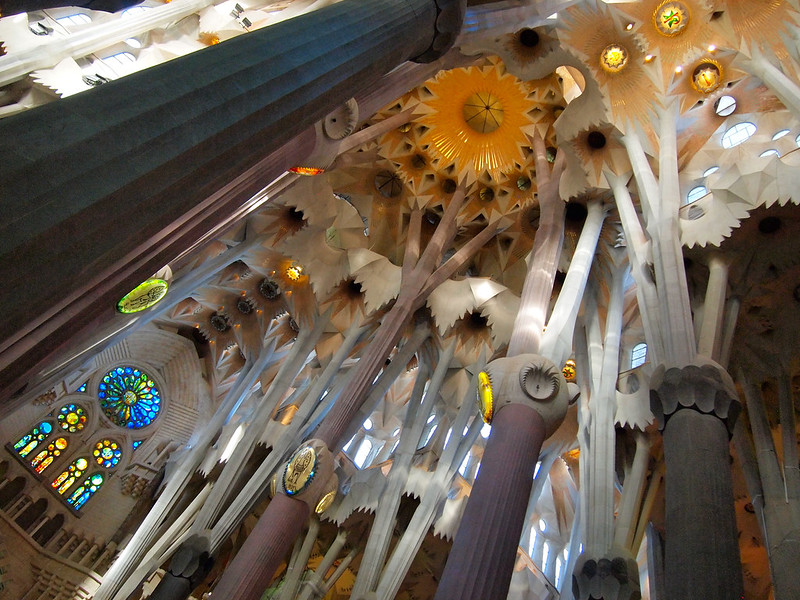 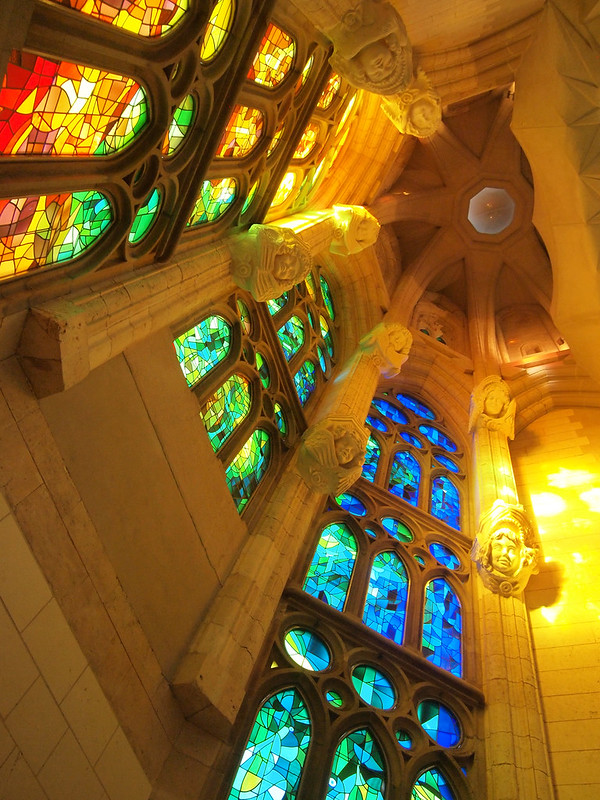 Address: Carrer de Mallorca, 401 (the Sagrada Familia metro stop)
Website: http://www.sagradafamilia.cat/sf-eng/
Price: 15 Euro for a regular visit; 19.50 Euro for regular visit and a visit to one of the towers; 24 Euro for a visit with audio guide and towers

TIP: Lines to buy tickets at Sagrada Familia can be really long. Book a timed ticket online ahead of time, which lets you skip the line and just show up at your appointed time. This is what I did, and it was quick and painless! You can just show your ticket on your smartphone when you get there.

Have YOU ever been to the Sagrada Familia? If not, would you go? 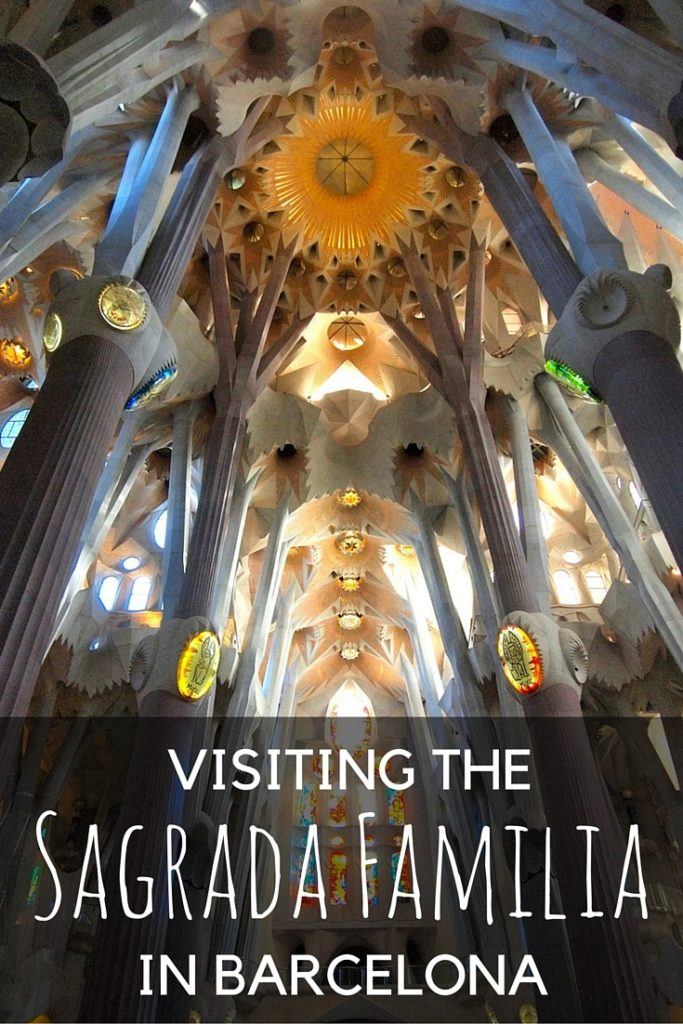 43 Comments on “Sagrada Familia: You’ve Never Seen a Church Like This Before”