Which of Portland’s Top Attractions Are Actually Worth It?

Home » United States » Oregon » Which of Portland’s Top Attractions Are Actually Worth It?

Among travelers, Portland, Oregon, is usually a must-visit in the Pacific Northwest. Oregon's largest city is known for its funky culture of food trucks, bicycles, and “weirdness” – not to mention being the end of the famous Oregon Trail.

Along with Seattle to the north in Washington, Portland has recently seen a boom in the tech industry and has become one of the most popular cities in the U.S. for young people to flock to. 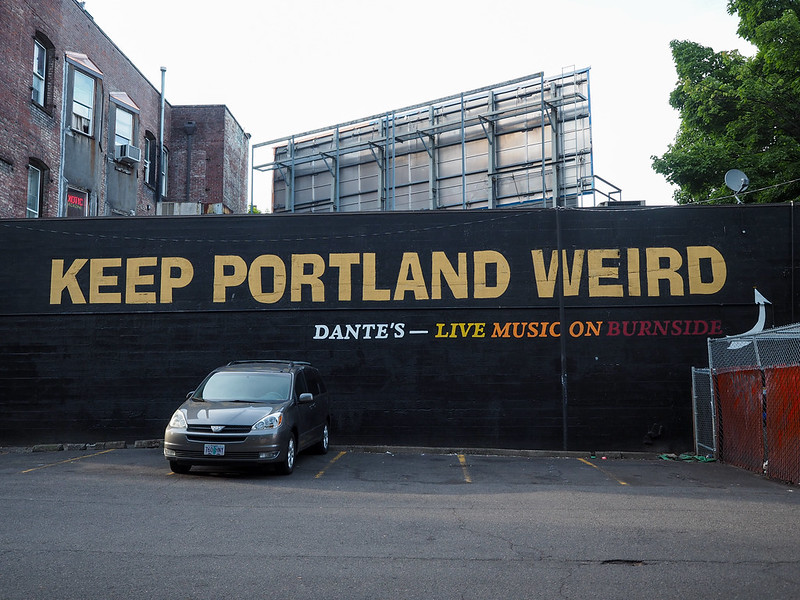 When my partner Elliot and I started planning a trip to Oregon, I knew we had to spend a couple days in Portland to see what all the hype was about.

And you know what? Portland IS a really cool city.

But, as with any city that's become synonymous with “cool” in popular culture, I wondered if some of the city's “must-sees” might be a bit overrated.

With our two days in Portland, Elliot and I tried to pack in as many of the city's top things to see and do in order to come to our own conclusions about what's really “worth it” in the city.

Which of Portland's top attractions are worth it?

Here were our conclusions: 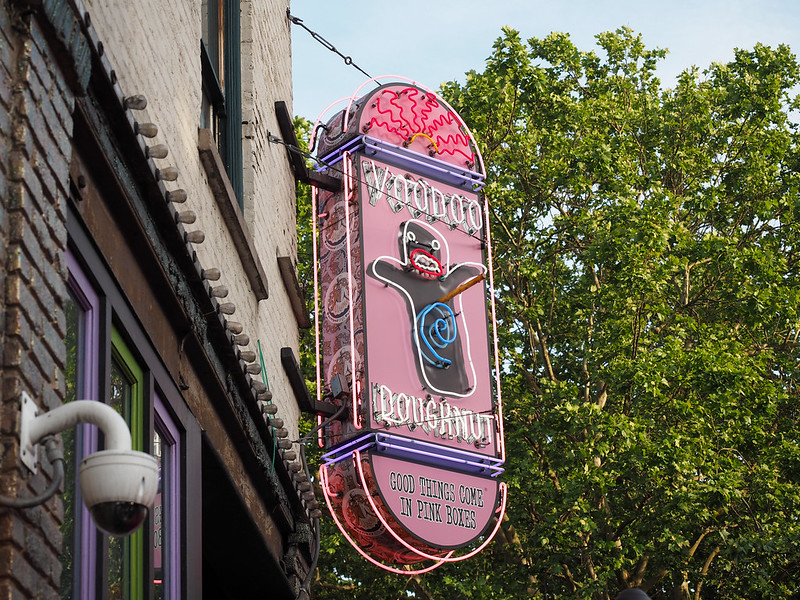 Where: The original is at 22 SW 3rd Avenue

How much: Anywhere from $1 up

I don't remember when or how I first head of Voodoo Doughnut, but somehow visiting the funky independent donut shop made it onto my travel bucket list. The original Voodoo location on 3rd Avenue in downtown Portland is characterized by its bright pink exterior and the fact that there's usually a line, regardless of time of day.

Elliot and I decided to go to Voodoo around 7:30 p.m. on a weeknight for dessert, and still waited about 10 minutes to grab a handful of whimsically-named pastries. (The raspberry-filled voodoo doll-shaped donut was actually my favorite!) 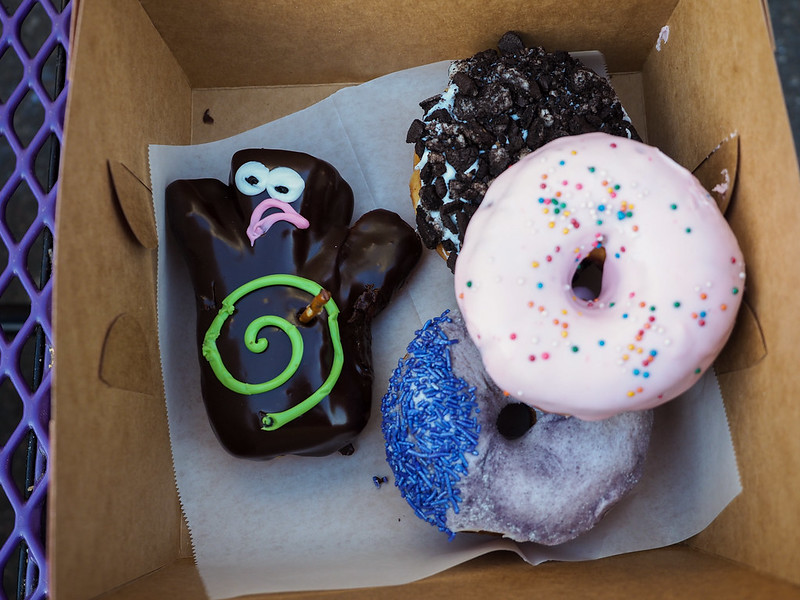 Worth it? It's become sort of a Portland institution, so I did feel like it was worth visiting. (The inside of the shop is funky, and the donuts are pretty good!) I don't know that I would wait in a really long line, though.

What to do instead? If you decide you don't want to wait, try Blue Star Donuts + Coffee, which also has a couple locations in and around Portland. The donuts at Blue Star are a little more expensive, but I thought they tasted better than the Voodoo ones! 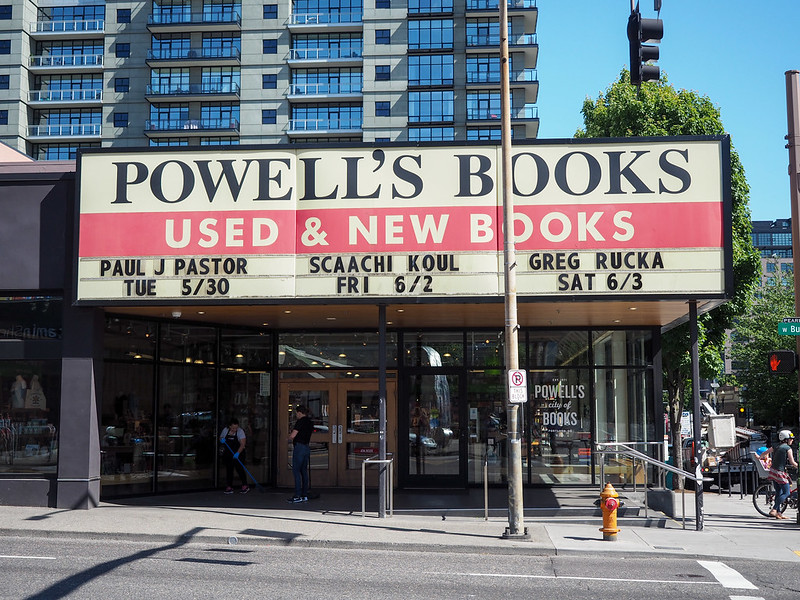 How much: It's free to shop or just wander around!

As a bit of a book nerd, I knew I couldn't visit Portland without going to Powell's City of Books. The headquarters for this local bookstore chain covers an entire city block and claims to be the largest independent new and used bookstore in the world.

Elliot and I spent a couple hours wandering through its rooms and rows of books of all genres – our favorite was definitely the Rare Book Room! 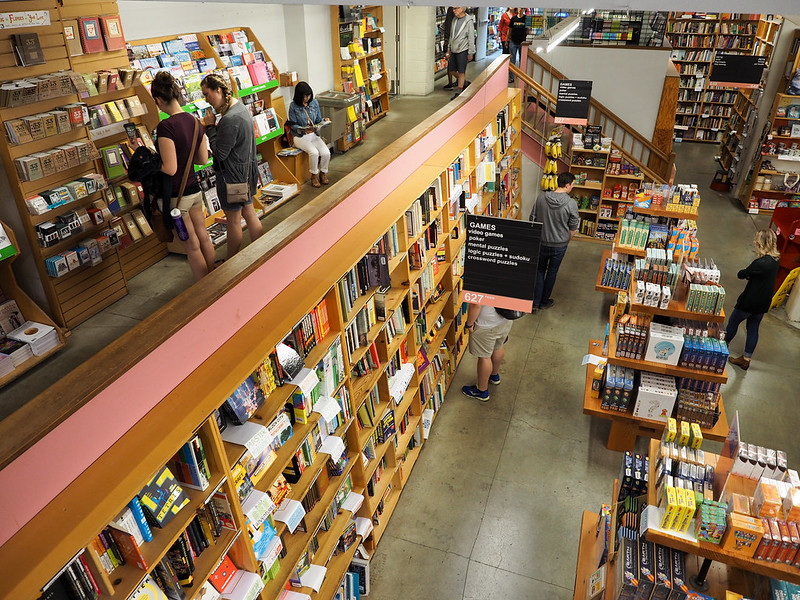 Worth it? I certainly thought so! It doesn't cost anything to visit, and I love a good bookstore.

What to do instead? Not into books? Check out the Union Way Arcade nearby, the Pioneer Place mall, or the indie 811 Building. Shopping in Portland is great since there's no sales tax!

Located in the West Hills of Portland, the Portland Japanese Garden is a traditional Japanese garden covering more than nine acres. It features a collection of different gardens, including the Strolling Pond Garden, the Sand and Stone Garden, a Tea Garden, and more.

Even on a busy afternoon, the collection of different gardens felt quiet and tranquil.

Worth it? While I really enjoyed wandering through the garden, I'm not sure I'd pay $15 to go again. You can see all the various gardens in a little over an hour, so you'll have to weigh whether the admission price is worth it or not.

What to do instead? Portland also has a traditional Chinese garden (the Lan Su Chinese Garden) that only costs $10 to enter. Or, if free is more your speed, you can head across the street in Washington Park and visit… 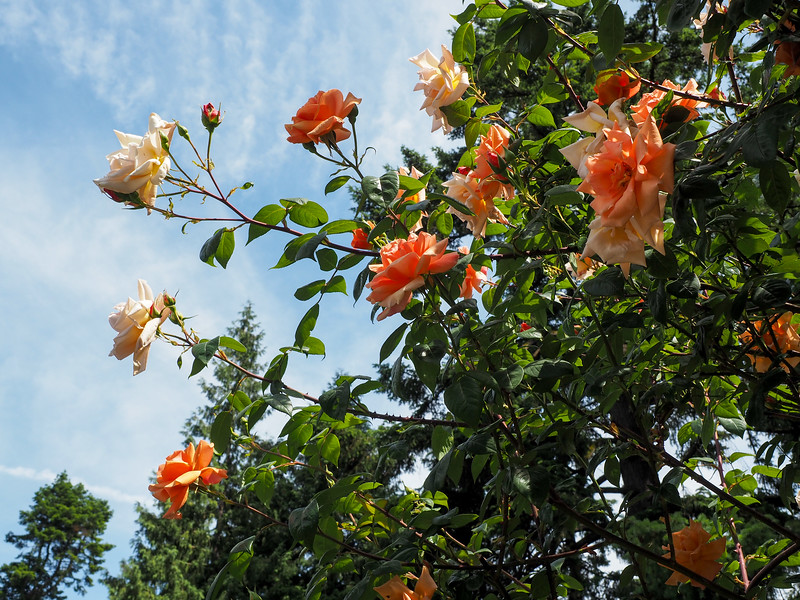 You might not know this, but Portland's nickname is the “City of Roses.” Because of its unique climate, roses grow really well here, and you can see tons of beautiful varieties at the International Rose Test Garden. Set on a hill in several tiers facing downtown Portland and the Cascade Mountains, there are more than 7,000 rose plants here, producing blooms in all different sizes and colors.

Elliot and I timed our visit perfectly in June, when the roses were at peak bloom. The day we went was also sunny and clear, meaning we had a great view of Mount Hood from the top of the garden!

Worth it? Definitely, especially if you're visiting Portland between April and October when the roses are in bloom. (And it's still a very pretty spot even if there aren't any flowers blooming!)

What to do instead? I actually wouldn't recommend an alternative here – it's a gorgeous garden to visit! 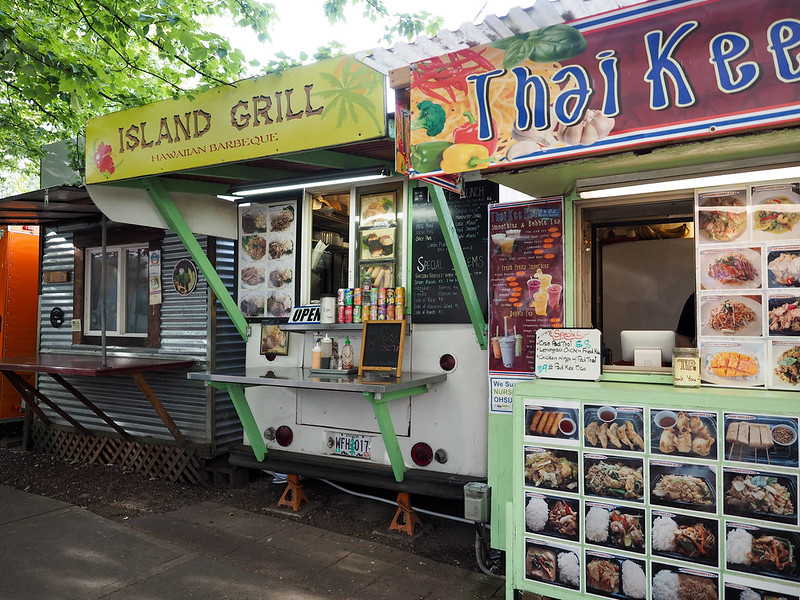 Where: All over Portland, including in a few permanent “pods” downtown

Portland is often viewed as the home or birthplace of the food truck phenomenon. And indeed you can find them all over the city. You can keep your eye out for individual carts, or seek out the “pods” (large gatherings of a bunch of different trucks) that are dotted throughout the city.

Downtown, you can check out the Alder pod (one of the city’s largest) or the Third Avenue pod, or head over to the Cartlandia “super pod” in Southeast Portland.

Worth it? Definitely. It's a must in Portland, and there's so much variety. The only tip I would give is to go to the large pods at lunchtime instead of dinner – we found that many of them aren't open for dinner!

What to do instead? Portland has a LOT of good food. If food trucks aren't your thing, you'll still be spoiled for choice. Some of our favorite meals in Portland came from Bottle + Kitchen and Grassa.

And this isn't all, of course! Portland is also home to great specialty coffee, craft beer, and some very cool parks (I highly recommend a walk through the Tom McCall Waterfront Park if there's not an event going on while you're there).

Overall we didn't really find Portland's “top” attractions to be overrated – the city really does deserve all the love it gets! 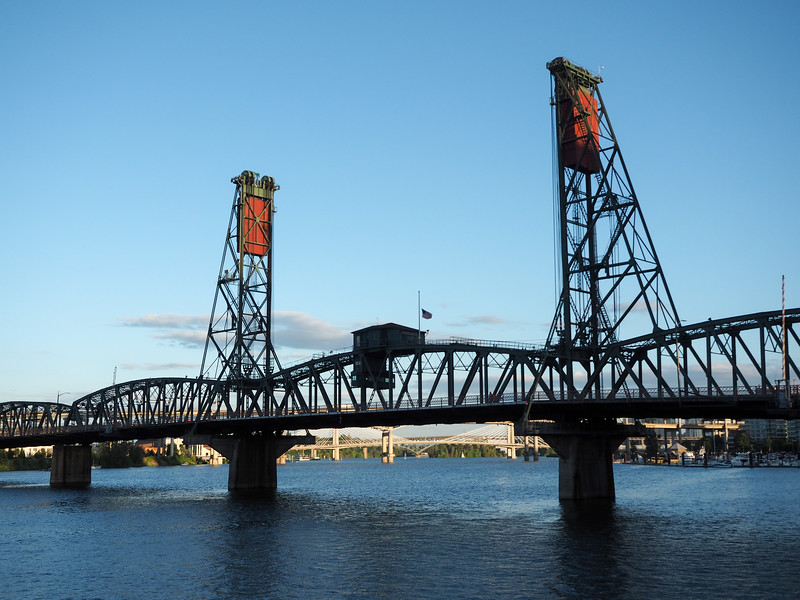 Where to stay in Portland

Wanting to be in a really central location, we stayed at Hotel Rose – A Staypineapple Hotel, just a block up from Tom McCall Waterfront Park and within walking distance of just about everything (we walked to Powell's, Voodoo Doughnut, and a couple food cart pods).

The hotel is bright and a little funky, and we loved the free coffee and pineapple cupcakes in the lobby. The hotel also offers a local shuttle service to popular city attractions, as well as yellow beach cruisers you can borrow to explore the city like a local.

Have you been to Portland? What did you think was worth it (or not)? 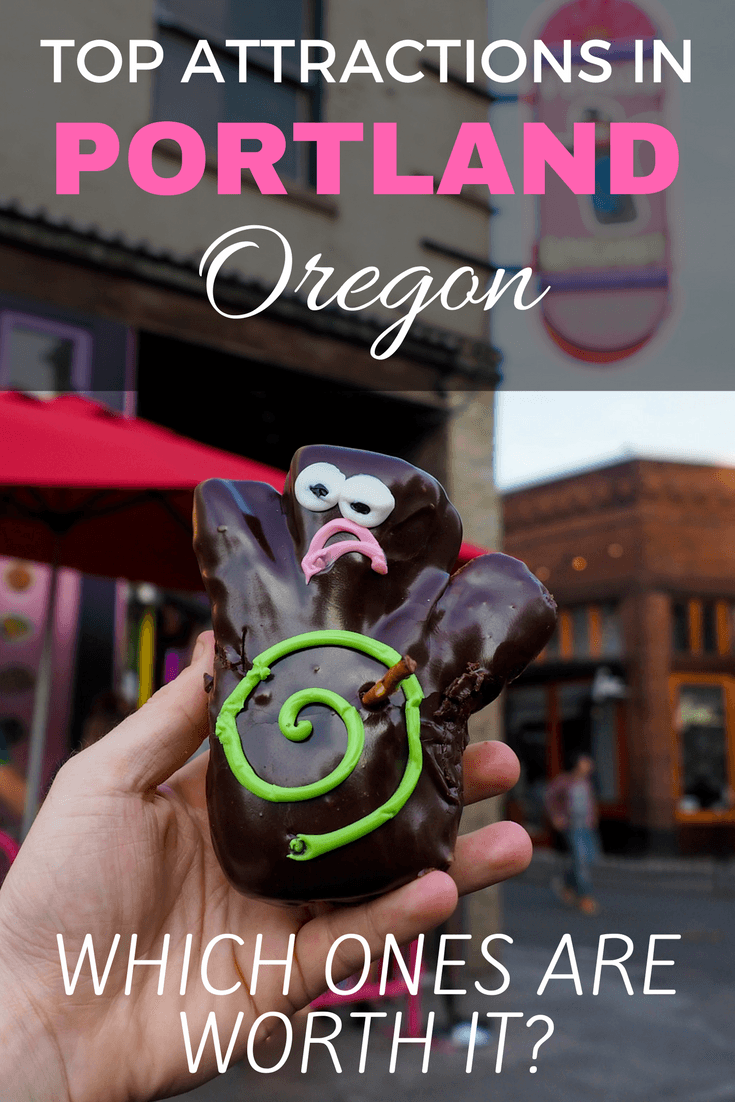 14 Comments on “Which of Portland’s Top Attractions Are Actually Worth It?”