October is always going to be a pretty exciting month for me – both my birthday and wedding anniversary fall within the first 10 days of the month! It's also usually my favorite month of the year because Ohio is bursting with fall color, but for the second year in a row the fall color has refused to show itself.  🙁

But it's all good because my October was filled with some awesome travels!

October: The month in travel

October was a diverse month travel-wise. I went from the hot and sticky Caribbean to the Canadian tundra in the span of just a couple weeks!

The best thing I ate: Believe it or not, Winnipeg, Manitoba, is home to a ton of great restaurants! My two favorites were Segovia (Spanish tapas) and Passero (Italian). At Segovia, I had an amazing eggplant and Brussels sprouts dish, and at Passero the tagliatelle with short rib ragout and black truffle was delicious. I also loved Clementine for brunch!

The most epic thing I did: I crossed a very big item off my bucket list and went up to Churchill, Manitoba to see polar bears in the wild! In October and November each year, hundreds of bears gather around the small town of Churchill as they wait for the Hudson Bay to freeze over. This is the perfect time to see these animals lounging around in the snow, wandering the tundra, and even play-fighting with one another. The experience was so much better than I ever thought it would be; polar bears are amazing! 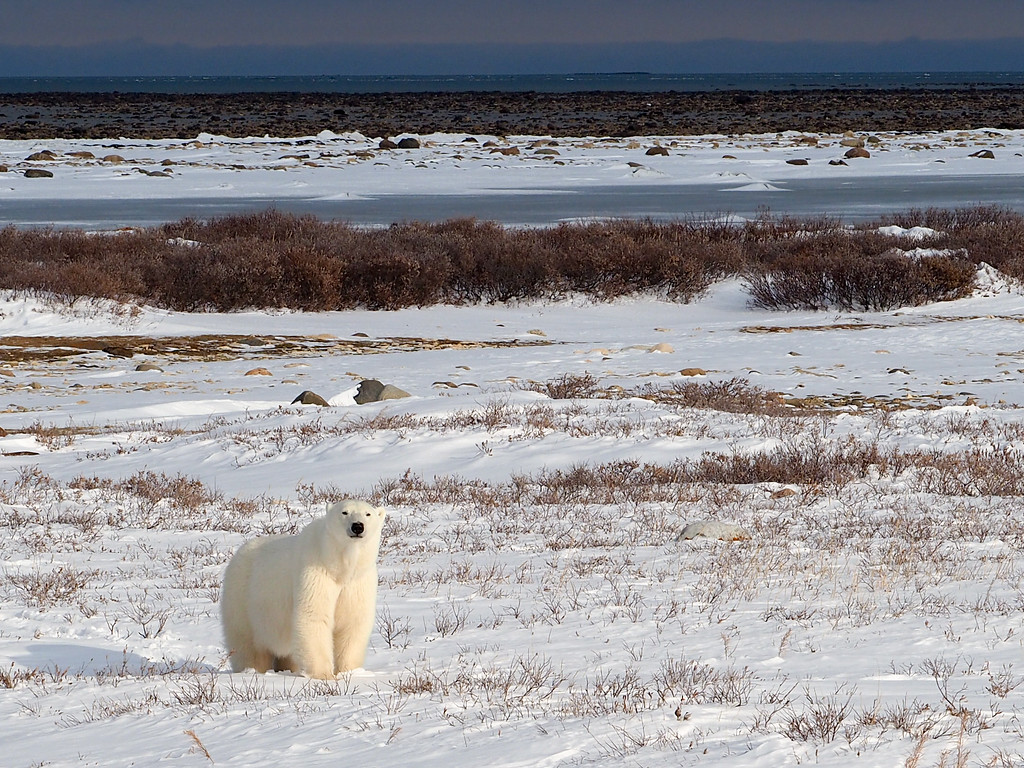 Celebrating our anniversary in Aruba – Elliot and I celebrated our first wedding anniversary in October, and did it in style by renting a private cabana for the day on Renaissance Private Island in Aruba (read more about it here). It was fun and relaxing, and is going to be hard to top next year!

Hanging with flamingos in Aruba – I won't lie to you: one of the main reasons we chose Aruba for our anniversary trip (other than the fact that it lies outside of the Hurricane Belt) was the flamingos that live on the private island owned by the Renaissance Resort. Hanging with them for a couple hours one morning was definitely a trip highlight!

Seeing polar bears in the wild – And of course a HUGE highlight this month was seeing polar bears on the tundra in Manitoba! It's something I've been wanting to do for years, and the actual experience was so much better than I ever expected. We rumbled around the tundra for three whole days, spotting everything from sleeping bears to sparring bears to baby bears. Locking eyes with a polar bear is something I will never, ever forget.

I didn't have any truly low moments this month. The only thing that (briefly) bummed me out was when I visited the Assiniboine Park Zoo in Winnipeg and all the resident polar bears were napping and I didn't get to see any of them swimming above the tunnels in Gateway to the Arctic exhibit. I really wanted to see a swimming polar bear! But seeing so many of them in the wild the next week in Churchill more than made up for it.

October on the blog

Autumn is never the best season for a travel blog, but my October actually wasn't too bad (until Halloween hit and it was like the internet disappeared into its plastic pumpkin full of candy!).

Most popular post: A Perfect 10-Day Itinerary for Norway in Winter – If you're looking for a great wintry trip with snow sports and Northern Lights, you can't go wrong with a trip to Norway! Here's a great itinerary you can follow that includes Oslo, Norway in a Nutshell, Bergen, and Tromsø.

Other posts published in October:

Most popular Instagram post: This month it was all about pink birds and white bears! But the pink birds were definitely the most popular, as this photo from Aruba proves!

I won’t lie to you guys: the fact that there’s a beach on Aruba with resident flamingos definitely made deciding which of the “ABC” islands to visit a whole lot easier. And these guys definitely lived up to the hype! What a lot of Instagram captions don’t tell you, though, is that these flamingos live on a private island owned by the Renaissance hotel. The only way to be guaranteed a visit is to stay at least one night at the hotel – then visiting the island is free. I’d say it’s absolutely worth it, though! But here’s a tip: go before 8am if you want good light and fewer people; and if you have kids, you can only visit the flamingos from 9-10am, as the beach they live on is adults-only. I sure hope you guys like flamingos, because I have a lot more photos to share!

My income remains steady, which is great – it means I can take multiple trips per month where I don't really work much (which is definitely what happened in both Aruba and Manitoba!) and not have to stress about it.

My first course sale! – This is the first year that I've 100% owned both my blogging courses, meaning it's the first time I can run my own Black Friday/holiday sale! (In case you weren't aware, I offer two courses for travel bloggers. Once is about working with travel brands/tourism boards, and the other is about affiliate marketing.) I'm offering 25% off both my courses throughout the month of November. Head over to my Teachable site to check out the courses, and use code ADBBLACKFRIDAY to take advantage of the discount!

New projects – I worked on some fun projects this month, including campaigns with Hotwire and outdoor clothing brand Rohan. And I'm already cooking up some projects for next year!

No major lows to report this month, which is always a good thing!

You guys… I don't have any trips planned for November! Or December! Eek!

I'm planning to stay closer to home for the holidays, mostly because I need to get some serious work done before the new year hits! I'm starting to plot some travels for early 2019, though, and you never know what could crop up between now and then.

I'm tossing around some trip ideas for January-March, and so far some top contenders include Hawaii, Portugal, Morocco, and Mexico – which one(s) would you be most interested to read about?

And remember that you can follow along in real-time with all of my adventures through my IG Stories on Instagram!