My Top 6 Experiences in Costa Rica

I've already shared with you video highlights and some of my best photos from my trip to Costa Rica. But which experiences that I mentioned in that post were my favorites? If YOU find yourself with limited time in Central America's most-visited nation, what should you dedicate some time to?

Read on to learn about my top 6 experiences in Costa Rica. Maybe they'll give you some ideas for your own adventure! 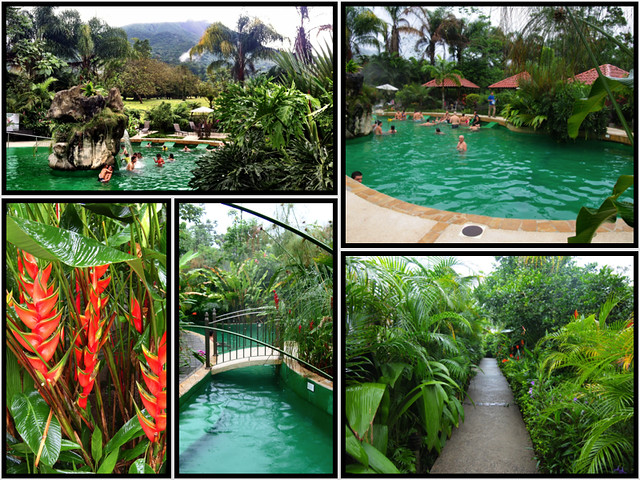 After a long, nearly 6-hour drive from Manuel Antonio, we arrived in the town of La Fortuna and were immediately greeted with… rain. Rain, and rather chilly temperatures.

The cool, wet weather continued the next day, nixing our vague plans for zip lining or paddleboarding or any other sort of outdoor pursuit. We went on a drive in the morning through the jungle towards Lake Arenal, spotting some wildlife — and plenty of clouds — along the way.

We eventually gave up and headed to some hot springs for the bulk of the day. We went to Paradise Hot Springs — an alternative to the big, expensive springs like Baldi and Tabacon. While small and not nearly as fancy as its more popular neighbors, Paradise was actually lovely.

Lisa and I were essentially the only non-Costan Ricans there, and we quite liked it that way. The best part was that we only paid $35 for the whole day, including a meal. 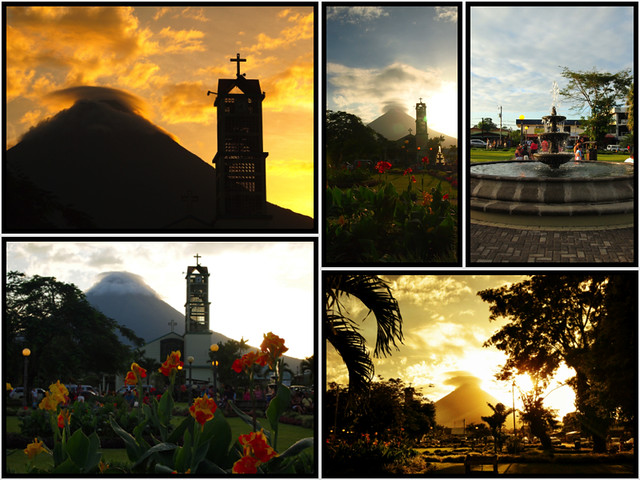 After a lazy day at the hot springs, we returned to La Fortuna just as the clouds were miraculously starting to clear. We were treated to a balmy and beautiful sunset that night from the park in the center of La Fortuna, with Volcan Arenal piercing through the clouds right at the golden hour.

I know how seriously lucky we were — most people I've talked to have visited this part of Costa Rica and never seen even a glimpse of the volcano. It was definitely memorable. 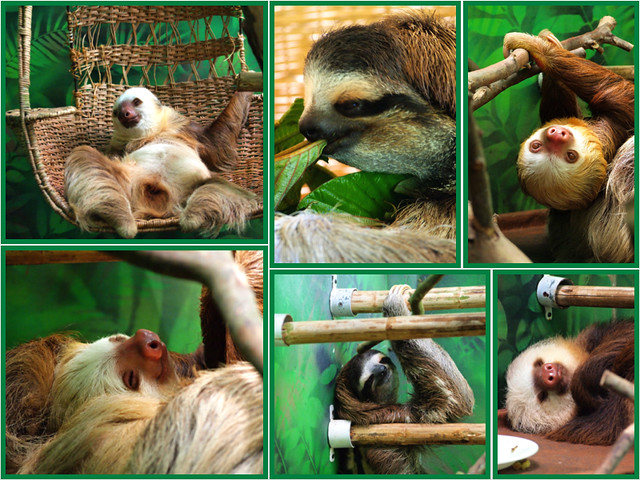 Our first stop in on Costa Rica's Caribbean coast (before we'd even had lunch) was at the Sloth Sanctuary. It is one of the only places in the world dedicated to rehabilitating and studying sloths — both three-fingered and two-fingered.

The sanctuary takes in injured sloths — many of them hit by cars or zapped by power lines — and does its best to rehabilitate them, while at the same time using the animals to educate people about these unique creatures.

We took the “Buttercup Tour,” which includes a guided tour of the sanctuary and lots of fun facts about sloths, as well as a canoe ride through the nearby jungly environment.

You used to be able to hold the sloths here, but the sanctuary has discontinued that practice after their vet suggested it was stressing out the animals. If you love sloths (or just want to learn more about them), this is a must-do. 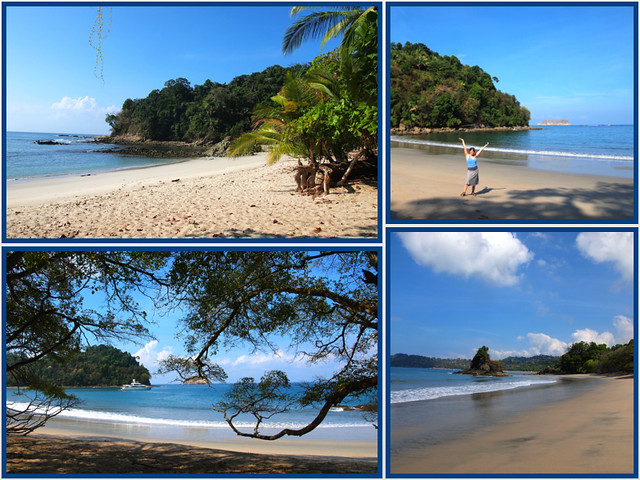 Our third day in Costa Rica, we woke up early (before the tourist crowds) and headed to Manuel Antonio National Park — one of the top destinations in the country. We went there hoping to spy monkeys and other local wildlife. But what we found instead were some of the most incredible beaches I've ever seen.

And, because it was before 9 a.m., and because you have to pay to enter the park, the beaches were pretty much EMPTY. Lisa and I agreed that we could have stayed at Playa Espadilla Sur all day.

2. Sunset sailing on the Pacific 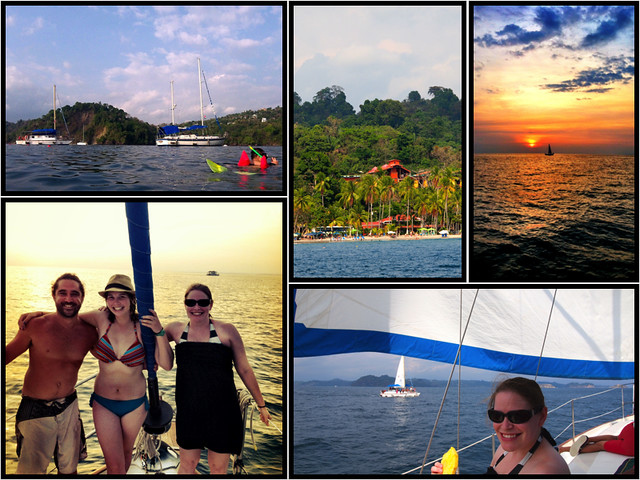 The afternoon before our morning of private beaches, we spent a few hours sailing the Pacific around Manuel Antonio. With only about 10 of us on a spacious sailboat, we enjoyed the sun and surf with reggae tunes as our soundtrack.

We spotted some dolphins, stopped for some quick swimming/snorkeling, and had one of the best meals of the trip onboard before literally sailing off into the sunset.

The trip was all at once relaxing and exciting — there's nothing better, I've decided, than a sunny day spent on a sailboat in the tropics. 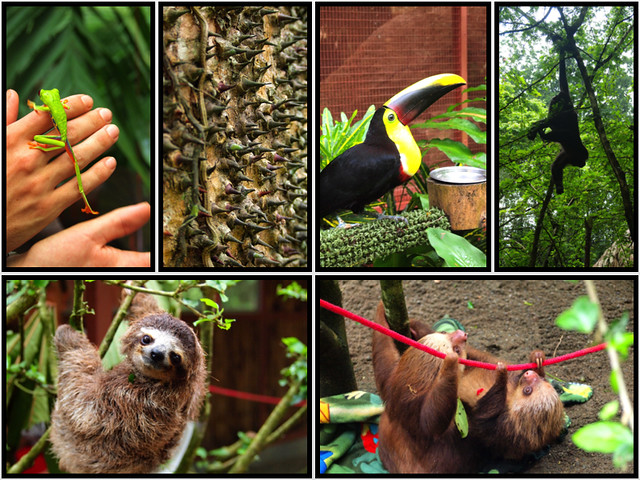 My favorite experience in Costa Rica was difficult to decide on. Sailing almost won, but in the end I had to go with our visit to the Jaguar Rescue Center in Puerto Viejo.

The Center was started by 2 Spanish biologists who met and fell in love in Costa Rica and became Puerto Viejo's de facto veterinarians. We visited this animal sanctuary on our last full day in the country, with me insisting on it since I knew they had monkeys there — Lisa's favorite animals.

The Jaguar Rescue Center doesn't actually have jaguars at all — but it does have a whole host of other jungle animals. During our visit we learned about everything from snakes to toucans to green tree frogs to sloths.

The adorable baby sloths were the highlight for me, but I know the highlight for Lisa was the monkey enclosure. Inside are a handful of young howler and spider monkeys who love to play — with each other, and with any human who enters the enclosure. At the end of our visit, we spent about 10 minutes inside, letting the monkeys use our arms, shoulders, and even heads as launch pads. It was not only an educational experience, but also incredibly fun.

READ NEXT: Fun Facts About Sloths

Which of these experiences would YOU most want to have in Costa Rica?

38 Comments on “My Top 6 Experiences in Costa Rica”