My Night in Prison

Home » Canada » My Night in Prison

I woke with a start, not entirely sure what had jolted me into consciousness in the middle of the night. Was it a muffled footstep in the deserted hallway? A disembodied whisper next to my ear? A slight movement in the shadows in the corner of my cell? I shuddered and huddled deeper under the covers, not really wanting to take a closer look.

I had fallen asleep reading in my bunk bed, the light on the wall still burning bright. I switched it off, plunging the cell into darkness. I swear it wasn't this dark last night.

Everything was eerily quiet on the fourth floor, and the only source of illumination at that time of night was in the form of the weak winter moonbeams that filtered through the barred windows in the hallway. It seemed the perfect atmosphere in which to spot a spectral figure gliding down the hall, and I did my best not to think of any of the creepy ghost stories I'd heard about the building earlier in the evening.

Just as I was teetering on the edge of sleep, a metallic drip-dripping noise began in the hallway, seemingly right outside my cell.

It's just the heating, I told myself. This building is 150 years old; old buildings make creepy noises at night.

But when the noise didn't stop and I couldn't stop thinking about a ghostly figure sitting at the bottom of my bed, I gave in and turned the light back on.

I would spend my night in prison not unlike many before me — scared out of my mind.

I was in an old jail, though — the Carleton County Gaol in Ottawa, Ontario, which is now the HI Ottawa Jail Hostel. 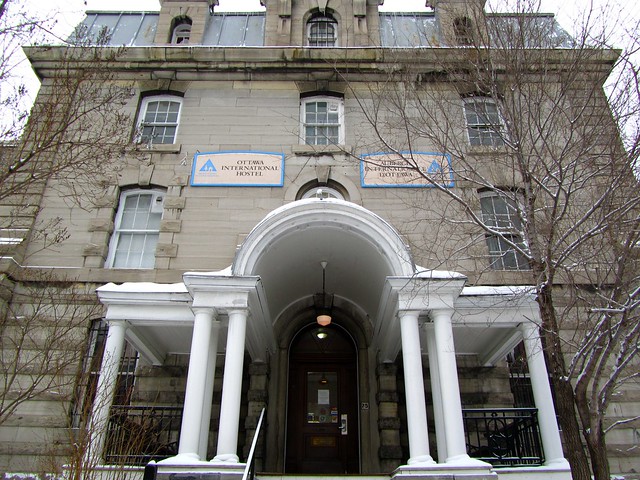 A Bit of Jail Hostel History

The prison first opened in 1862 as Ottawa's main detention center for everyone from drunkards to murderers. When it opened, it was a model prison; the prison many other prisons would be built to emulate. It went on to serve as the area's main jail for more than 100 years.

But when it was finally shut down in 1972, it was because of the jail's inhumane conditions.

After the prison was shuttered, it briefly faced an uncertain future, until Hosteling International purchased the building and converted it into the Ottawa Jail Hostel.

For the first few years the hostel was in operation, guests paid to sleep in actual, unaltered jail cells — cells that were roughly 9×3-feet; just big enough to fit a narrow bed behind a barred door. 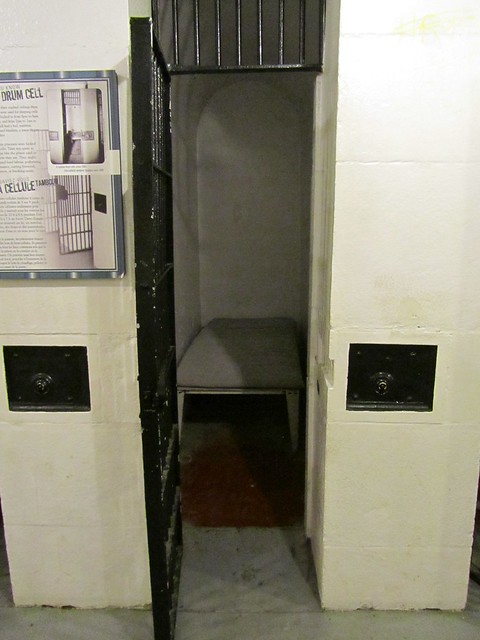 Eventually, though, the first 7 floors of the jail were renovated into more hospitable hostel conditions. Today, guests can choose from a variety of shared and private jail cells, as well as more traditional hostel dorm rooms — all of which come complete with free wi-fi and a free continental breakfast in the morning.

But, despite the renovations, the Ottawa Jail Hostel is still far from your average backpacker's hostel. 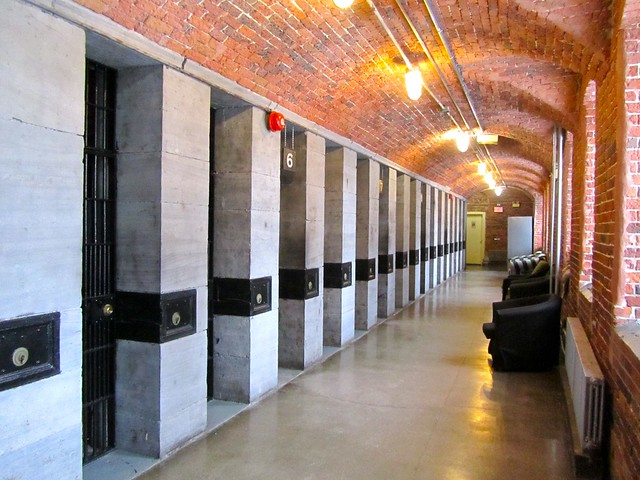 I can't say I've ever experienced a hostel quite like this before.

The first thing I noticed upon entering the Ottawa Jail Hostel were the heavy, wooden doors. These are the real deal, left from when the building was an operating prison. 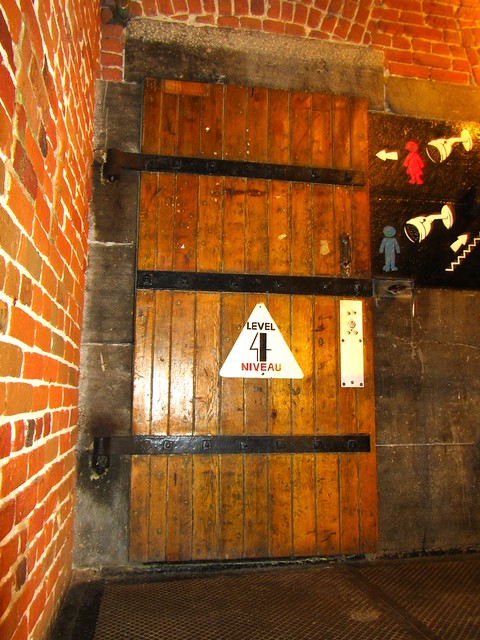 Yes, the hostel has been brought into the 21st century with free wifi, keypad entry for security, and a bar in the basement, but much of its past remains front and center. The “rooms,” while clearly larger than the original jail cells, are still contained behind iron-barred doors. The stairs still have “suicide bars” on them, which would have prevented prisoners from jumping to their deaths (or pushing guards to their deaths) in the stairwells. And there are still bars on all the windows.

When you sleep here, you really do feel like you're in prison.

This is not a hostel you stay in because you want a comfortable, cozy place to rest your head at the end of the day. Yes, the showers are clean, the blankets are warm, and the mattresses are thicker than some I've slept on. But you don't stay here for all that. You stay here for the experience.

And believe me, staying at the Ottawa Jail Hostel certainly is an experience.

A Dark, Ghostly Past

I'm not a huge fan of ghost stories. Whether I believe in ghosts or not, the stories tend to freak me out. But I knew I could not stay in a place that has made it onto various “most haunted buildings” lists (including Lonely Planet's “Top 10 spookiest buildings around the world“) and not get to know it's past — no matter how ghastly.

So on my first night at the Jail Hostel, I signed up for the nightly “Crime and Punishment” tour. Run in conjunction with The Haunted Walk, this tour takes you to some of the un-renovated parts of the former prison and gives you an idea of what it was like to be a prisoner here 100 years ago. 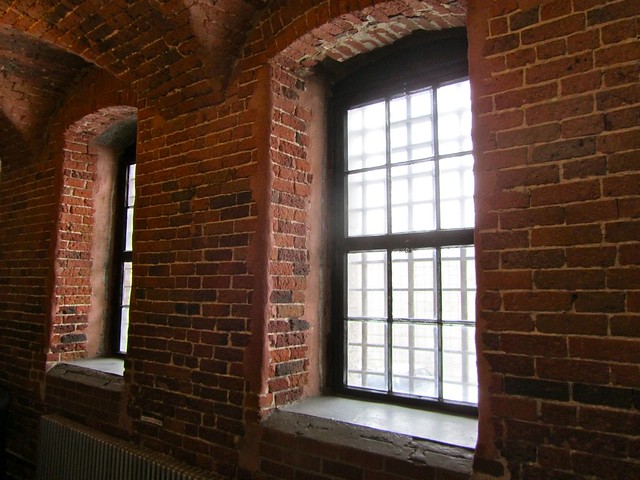 The tour takes you first to solitary confinement in the basement (where prisoners were often chained down naked, belly-first) and then heads up to the 8th floor — the floor with the most dark history in the building. The 8th floor, largely un-renovated and left to look as it did when the prison closed in 1972, is home to dark cells and a few prison relics, as well as Death Row and the gallows, which are still fully operational.

The 8th floor tour began in just a regular jail hallway, where our guide Fraser explained what jail life would have been like in the early years at the Carleton County Gaol. For the first few years the prison was in operation, there was no glass on the barred windows, and the prisoners slept without beds.

I shivered as I imagined facing an Ottawa winter in a narrow stone cell with nothing between me and the elements but a thin wool blanket. It's no wonder an undocumented number of prisoners died here.

Fraser also explained why the Carleton County Gaol was such a model prison when it opened. Part of the reason was because of the design of the cells — they have what are called drum ceilings, or arched ceilings that give the halls fantastic acoustics. As a guard, you could sit at the end of the hall, and hear even the softest whisper from the cell furthest away from you.

An Austrian guy named Michael and I tried this out, with him going in an old cell and whispering something as I stood at the other end of the hall.

I could hear him as clearly as if he were standing next to me.

(This of course means that this would NOT be a quiet hostel to stay in if it were full. “Quiet time” begins at 11 p.m. in the cells each night for this reason.)

After heading to the other side of the 8th floor and getting a glimpse into the cells that would have been shared by 3 or more people, we headed to the most sinister part of the building: Death Row.

Canada no longer observes the death penalty, but it did up until 1976. Three men were put to death at the Carleton County Gaol — two of whom may have actually been innocent.

The most famous prisoner to die at the Ottawa gallows was a man by the name of Patrick Whelan. Whelan was accused of assassinating Thomas D'Arcy McGee in the 1860s, and it was public opinion more than anything that convicted him. The evidence against Whelan was weak, but because McGee was considered one of the fathers of Confederation in Canada and was a friend of the prime minister at the time, weak evidence was enough for a conviction.

Whelan maintained his innocence until he was hung in 1869 in what would be Canada's last public execution. More than 5,000 people came in the middle of a snowstorm to watch Whelan die, and a miscalculation on the part of the hangman meant that, instead of a quick death, Whelan took up to 7 minutes to expire at the end of his rope.

He was then denied his last wishes of having his body buried in his family grave in Montreal, and instead was buried in an unmarked grave in the prison's courtyard. No Catholic priest would come to conduct a funeral for him at the prison, and it is said that Whelan's restless soul still haunts the jail.

I learned more about Whelan and the other spirits who are said to haunt the Ottawa Jail Hostel the next evening, when I took Haunted Walks' “Ghost and Gallows” tour of the building. I always maintain that any guided tour either succeeds or fails depending on the guide, and this was a perfect example of that.

While the ghost stories shared on the tour were indeed spooky (plenty of people, for example, have claimed to have seen Whelan's ghost perched at the ends of their beds in the middle of the night), the script for the tour was clearly rehearsed and memorized, and fell a bit flat. I found the guide on the “Crime and Punishment” tour the night before to be much more engaging, and the facts shared on that tour to be much more interesting.

For example, are you at all curious about what offenses could have gotten you thrown into jail in Ottawa in the late 1800s? Offenses included:

While other versions of the ghost tour might be great, my experience wasn't. It didn't help that the guides for these tours wear cloaks and carry around lanterns… I think it would be hard to take some of their stories seriously to begin with. If you're going to take any of the tours at the Ottawa Jail Hostel, I would recommend the “Crime and Punishment” tour over the “Ghost and Gallows” tour.

If you want to brave a night or two with the spirits at the Ottawa Jail Hostel, I highly recommend it. It's affordable, and within walking distance to all the major spots in downtown Ottawa, including the Byward Market area and Parliament Hill. And, if nothing else, it'll certainly be a great story to tell later.

Click here to book at the HI Ottawa Jail Hostel. 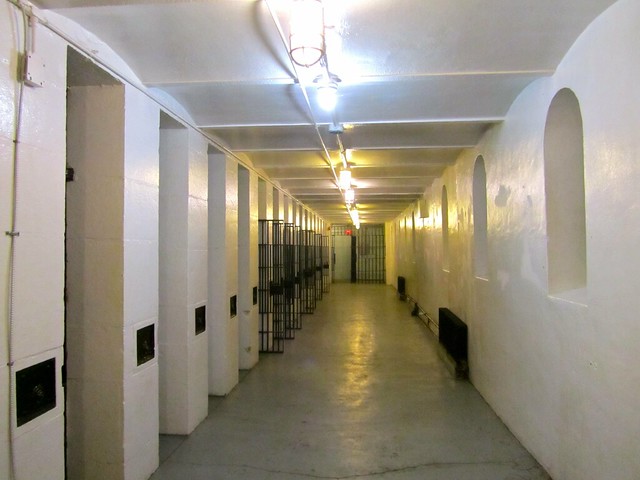 Would you dare to stay at the Ottawa Jail Hostel?

*Note: My stay at the Ottawa Jail Hostel was complimentary, as were my Haunted Walks tours. As always, however, all opinions are my own.