Ka’a’awa Valley: Where the Cows and the Dinosaurs Roam

Home » United States » Hawaii » Ka’a’awa Valley: Where the Cows and the Dinosaurs Roam

I’m definitely no stranger to the film tourism phenomenon. I’ve seen my fair share of bare hills, snow-capped mountains, river-strewn valleys and patches of forests in New Zealand that starred in Peter Jackson’s “Lord of the Rings” trilogy.

Yes, I’m one of THOSE people.

The people who seek out locations that were used as backdrops for their favorite movies or TVs shows, long after the sets have been demolished and good ol’ Mother Nature has moved back in to reclaim them. 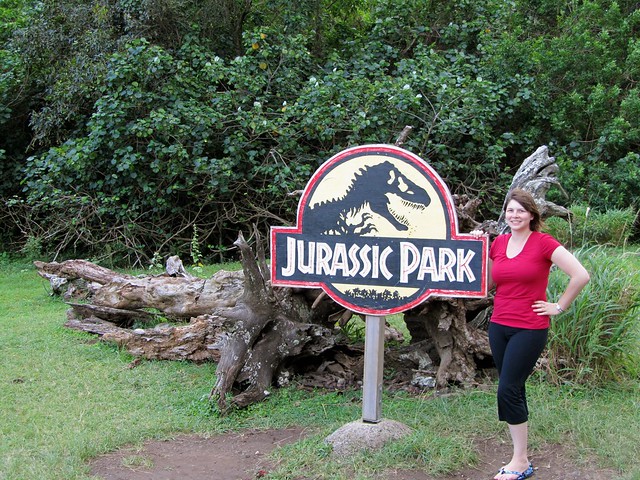 Some people simply want that small taste of Hollywood. Others want to stand in the same spots that their favorite actors and actresses did. And yet others, like myself, just enjoy seeing familiar scenery and getting that tingle down the spine that tells you, “this is pretty damn cool.”

This last tingly scenario is what I was going for when I signed up for a “Movie Sites and Ranch Tour” at Kualoa Ranch near Kaneohe on the Hawaiian island of Oahu. 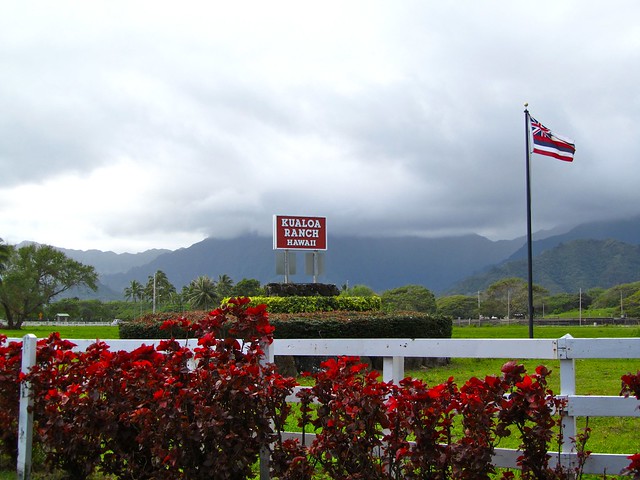 The 4,000-acre ranch, while being an active cattle ranch, is also a popular stop on the Oahu tourist trail. Many tour buses can be spotted at all times of the afternoon on any given day.

How it became such a popular stop isn’t difficult to understand, though. Kualoa is marketed for fun. You can go horseback riding, tour gardens, go on ATV adventures, take hula lessons, visit a petting zoo, or simply take a scenic tour that offers some spectacular views of the Hawaiian coastline. The ranch is lucky to be set both right near the Kaneohe coast, and the majestic Ko’olau mountain range. 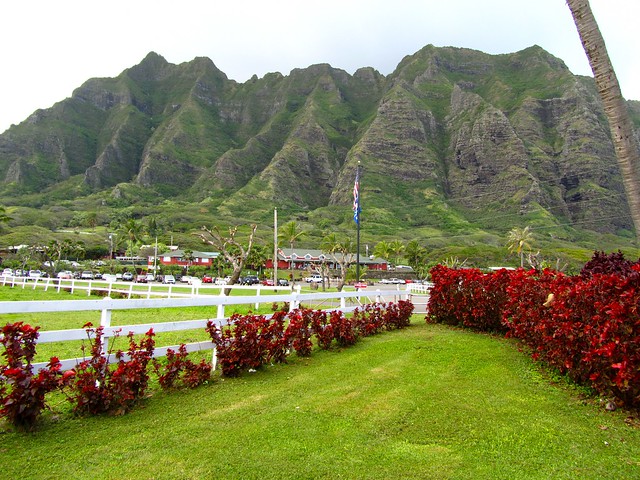 It’s because of its awe-inspiring location that Kualoa Ranch — and its amazing Ka’a’awa Valley — is one of Hawaii’s most popular filming locations for both feature films and popular TV shows. Movies like “Jurassic Park,” “Windtalkers,” “Pearl Harbor,” “Tears of the Sun” and “50 First Dates” have filmed scenes here, as have TV shows like “Hawaii Five-O,” “LOST” and “Off the Map.”

I decided I had to check it out. 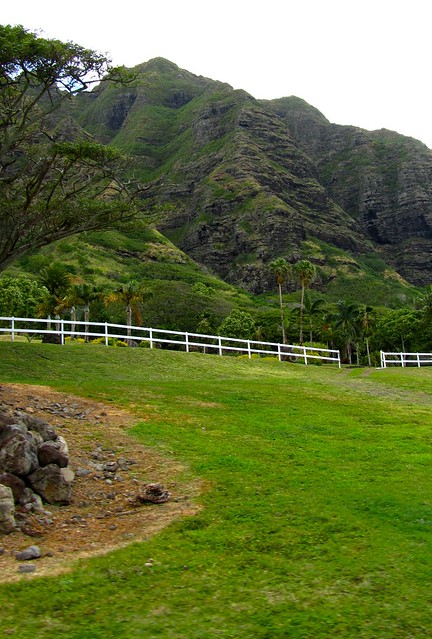 Since I was already galavanting around the island on my last day in Hawaii, I decided to squeeze in a tour at Kualoa Ranch. TheBus dropped me off right outside the ranch’s gates, and I went inside the gift shop/concession stand/reservations office to book myself on a tour.

After getting my ticket, it wasn’t long before I — along with about 6 others — was herded onto a large open-air bus emblazoned with the ranch’s name. 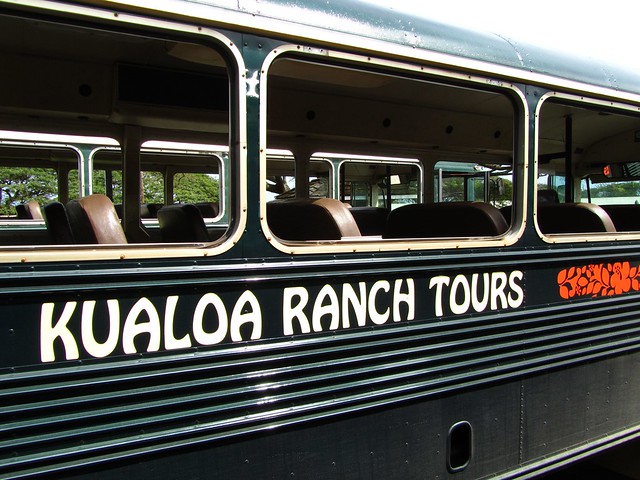 We trundled through a few ranch gates, where our guide told us a little history about the ranch. The land used to be considered one of the most sacred places on the island of Oahu, and was owned by the Hawaiian King until the mid-1800s. The land was then sold to a man by the last name of Judd, and was used for various purposes over the centuries.

After the bombing of Pearl Harbor — on the opposite side of the island — during World War II, the military decided they needed some land on Kualoa’s side of Oahu to keep an eye out for future attacks. They rented some land from the ranch, and built an auxiliary airstrip and several bunkers there.

Our first stop on the tour was the largest of the remaining bunkers, which was built right into the side of the mountains. The bunker — featured in the movie “Pearl Harbor” and also in the TV show “LOST” as the DHARMA Initiative station called The Tempest — is now used as a mini museum. 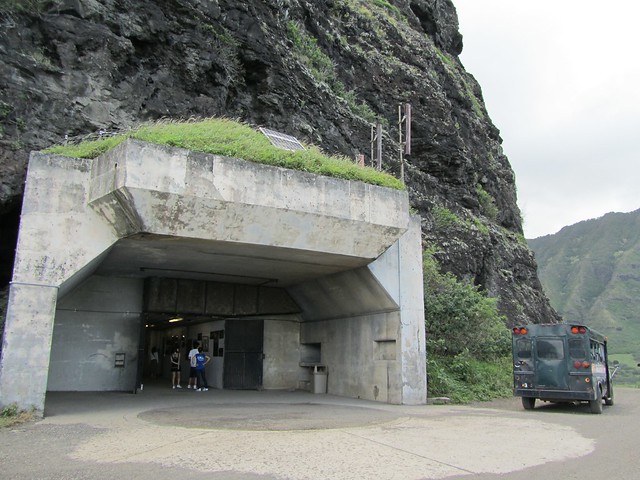 Inside, the bunker’s walls are lined with photos. One room houses photos and some artifacts from when Kualoa Ranch was used by the military, while all the other walls are covered in photos and posters from the movies and TV shows that have been filmed on the ranch over the years. There’s even a submarine prop on display there.

After our stop at the bunker museum, it was on to the true highlight of the tour — Ka’a’awa Valley. This valley is where many cinematic scenes have been shot, and it’s not difficult to understand why. 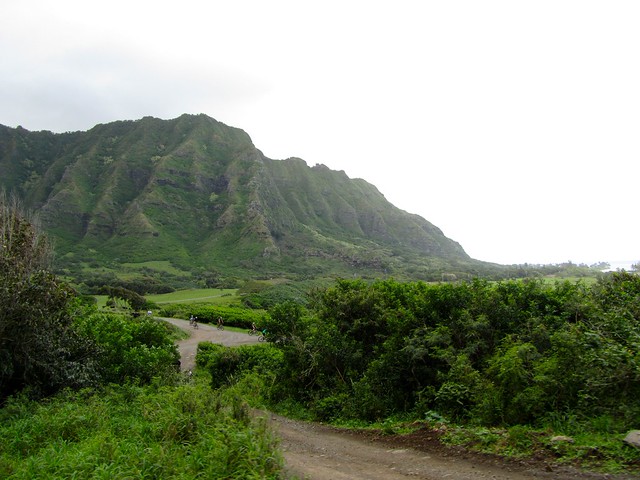 Even though some of the peaks were swathed in cloud while we were in the valley, it was nothing short of breathtaking. 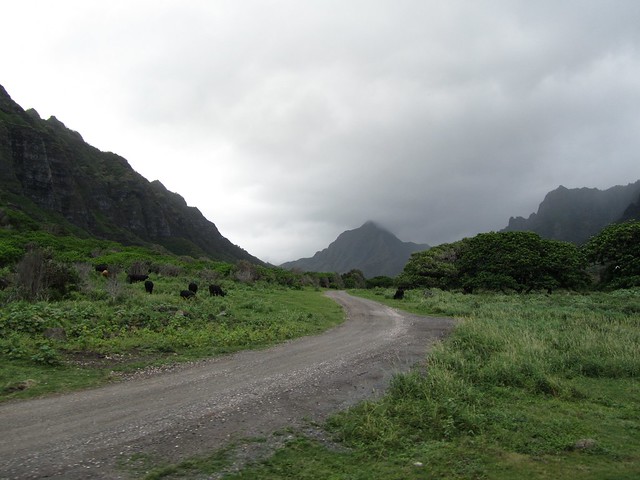 Add in some John Williams music from “Jurassic Park” (which our guide did), and that spine-tingling feeling wasn’t far behind.

Our guide stopped once in the valley, allowing us to hop out and take some photos, and then continued her commentary as we rolled through the lush location.

Little elements from certain movies have been left behind in Ka’a’awa Valley, like 4 giant footprints from “Godzilla,” and a few thatched huts here and there from other films like “50 First Dates” and “Mighty Joe Young.” Other filming sites are simply marked by a sign. 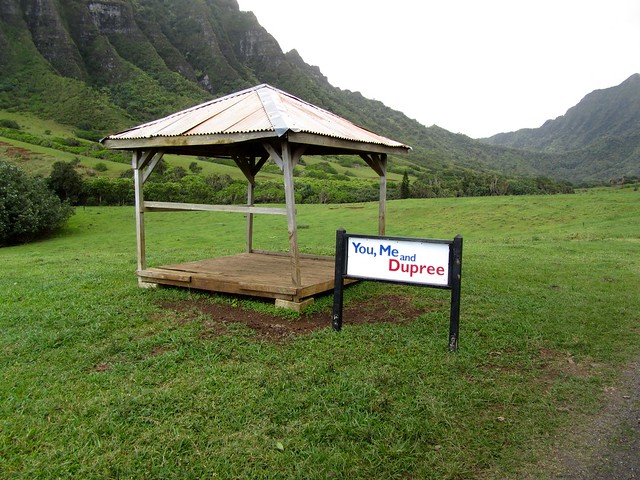 Much as I was amused by tourists snapping photos of bare hills that once housed hobbit holes in Matamata, New Zealand, I was amused at everyone on the bus taking photos of signs pointing out where a scene in “Windtalkers” or “Hawaii Five-O” was filmed.

But that’s kind of the whole point of a tour like this — to just be touristy and enjoy it. It’s fun to watch a movie or show on TV and say, “I’ve been there.” It’s almost like knowing somebody famous. 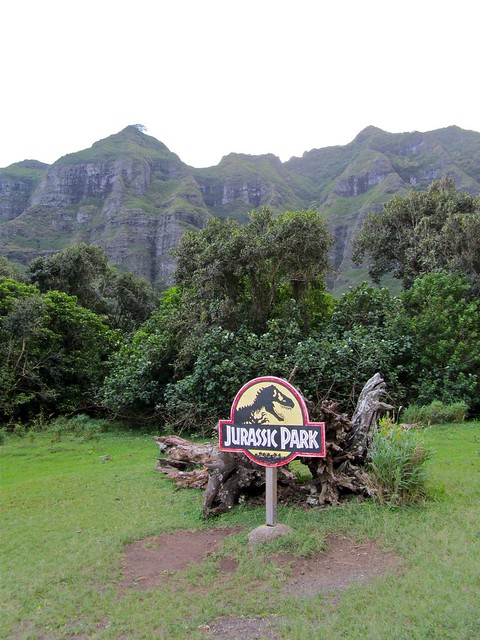 Other parts of the Kualoa Ranch have also been used for filming — for example, the fish pond currently houses the set for ABC’s “Off the Map,” and was also used to film sub scenes in “LOST” — but were not included in this tour. I half contemplated paying for another tour to those areas, but time and budget constraints made me decide against it.

Our tour wrapped up with a drive back to the main ranch buildings through some native vegetation, where we learned that Hawaii has no snakes, but plenty of mongooses. 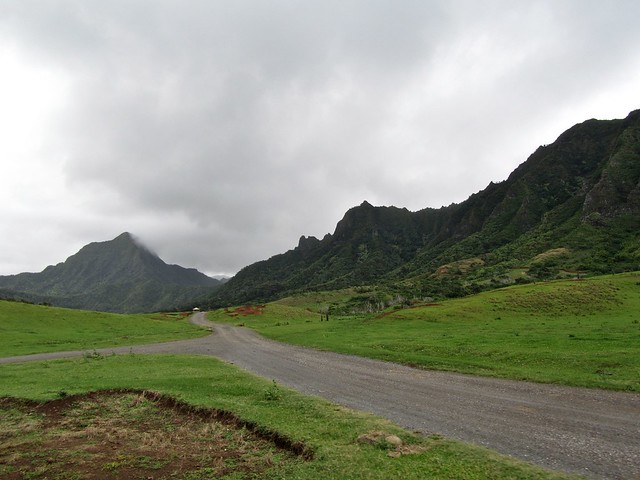 This tour isn’t necessarily for everyone. But, if you’re looking for some gorgeous scenery and a little bit of movie magic in Hawaii, then I think it’s worth it.

While I can’t vouch for any other tours other than the one I went on, I’d be inclined to say the views alone are almost worth the ticket price. 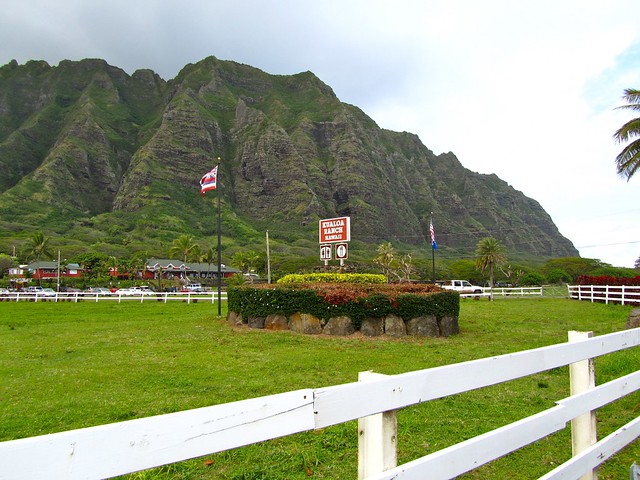 Want to try out some of the other tours at Kualoa Ranch? Here are a couple to check out:

What about you — would you be inclined to give a tour like this a go while traveling?

24 Comments on “Ka’a’awa Valley: Where the Cows and the Dinosaurs Roam”