Travel Tips: Using The Bus to Get Around Honolulu

Home » United States » Hawaii » Travel Tips: Using The Bus to Get Around Honolulu

So you’re going to Honolulu.

You want to see as much of the island of Oahu as possible, but you don’t really like guided group tours, and you don’t want to spend the money on a rental car. What do you do?

You take TheBus, of course.

Honolulu’s public bus system services the entire island of Oahu. This may sound impressive at first, but you have to remember that the island is only 44 miles long and about 30 miles wide. Meaning that it’s entirely feasible to use large buses to cart people all around it.

Yes, using TheBus on Oahu can definitely save you some cash if you plan to do a lot of traveling. But, if you’re not familiar with city bus travel or with the city of Honolulu, it can be a bit daunting. What bus should you take? How much will it cost? Where all can you go?

To help you out, I’ve compiled a few tips on using TheBus to navigate your way around Oahu.

Use a Google Maps App

Before you even head to a bus stop, download the free Google Maps app for your smartphone. Believe me, it is the most useful app to use when traveling around Honolulu (and probably a lot of other cities, too).

With this app, you are able to get bus directions for all of Oahu. Simply use the “Get Directions” feature, type in your beginning and ending points (exact addresses are best, but you can also use street names or attraction titles with city and state), and then select “public transit” in the “Travel by” section. Then, simply hit “Get Directions,” and Google will figure out all your route options.

It will tell you what bus to take and at what time, where the nearest stop is, and where to transfer buses. You can look at options “in the future,” and also get reverse directions. If you go to the “Map View,” you can see detailed walking directions to the nearest bus stop, and even follow the route as the bus is traversing it.

This really came in handy when I was bus-hopping on my own on multiple days.

Have Exact Change or Buy a Bus Pass

A ride on the Honolulu bus costs a set price of $2.50. You need to have exact change, which you feed into a machine right next to the driver. The driver will then give you one transfer ticket that is valid for a couple of hours (though, it seemed like you could get away with using it beyond the expiration time, as long as it was used on the same day that you got it).

If you don’t want to carry around that much change and worry about losing those transfer slips, however, consider buying a 4-day bus pass. These passes cost $25 and can be purchased at any ABC Store in Honolulu, and at a variety of other convenience shops. They allow you unlimited use on ALL of Oahu’s bus routes, including Express ones. $35 might seem like a lot, but if you are using TheBus frequently (such as taking more than 4 buses per day), you’ll get your money’s worth.

And, even though the pass is only supposed to be valid for 4 consecutive days from the day you begin using it, I got away with using mine for 6 days when I was in Hawaii. Most of the drivers just glanced at it, but never actually checked the dates. 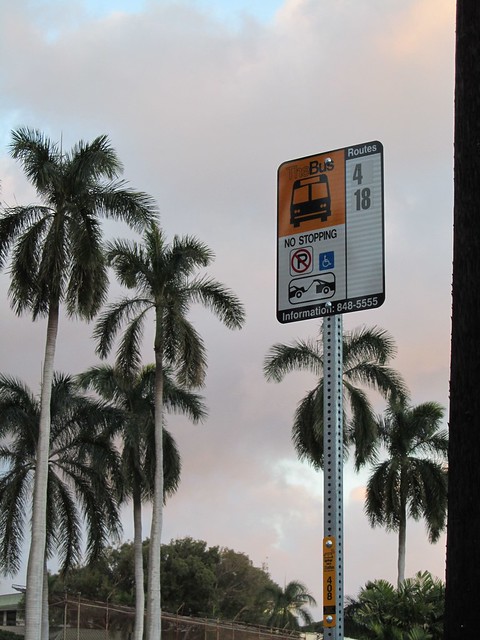 Especially if you’re traveling on your own, you’ll want to pay attention to make sure you don’t miss a transfer point or your intended stop. Some of the buses are equipped with scrolling marquees at the front that flash the cross streets of each stop before you reach it. Others will announce upcoming stops over a PA system. Some will do both. Others may lack the marquee and only verbally announce major transfer points.

The Google Maps app I mentioned can help with this, because it will tell you exactly which stop you need so you can listen/watch for it. And, if you follow your progress on the map view feature of the app, you can get an idea of when you need to be getting ready to request a stop.

When in Doubt, Ask

If you aren’t very confident in your map reading skills, or if the bus is noisy and you can’t hear the announcements, or if you just aren’t sure about what route to take, simply ask someone.

Most of the bus drivers I encountered were super friendly, and they all knew the bus routes well. Even though my Google Maps app was wonderful, it still gave me confusing directions a few times, and I had to confirm with the driver that I was getting on/off the right bus. (Unlike in the photo to the right, some bus stops don't actually list which number buses stop there…) If you ask a driver about a particular stop or route, most likely he/she will personally give you a heads-up when you’re getting close.

Alternatively, you can also ask fellow bus riders any route questions you might have. Not all of them will have answers for you, but most will at least be friendly about it. I was actually asked bus advice 3 times during my stay, which I found humorous since I was just a visitor, too! I guess I must have at least looked like I knew what I was doing.

This tip might sound silly, considering Hawaii has an average temperature of about 75 degrees F that only ever varies by 5 or 10 degrees either way. But don’t be fooled by that warm, tropical air outside the bus doors. Inside, the buses are all air conditioned. REALLY air conditioned. If you’re going to be riding for a while, it’s not a bad idea to bring a light jacket along for when that chilly air is blowing right on the back of your neck.

It also tends to be colder at the front of the bus, so snag a seat further back if you don’t want to spend the whole trip covered in goosebumps.

This should go without saying, but be polite when riding TheBus. Give up your seat to little old ladies. Don’t spread your stuff across 6 seats. And thank the driver when you leave. A little courteousness can go a long way. 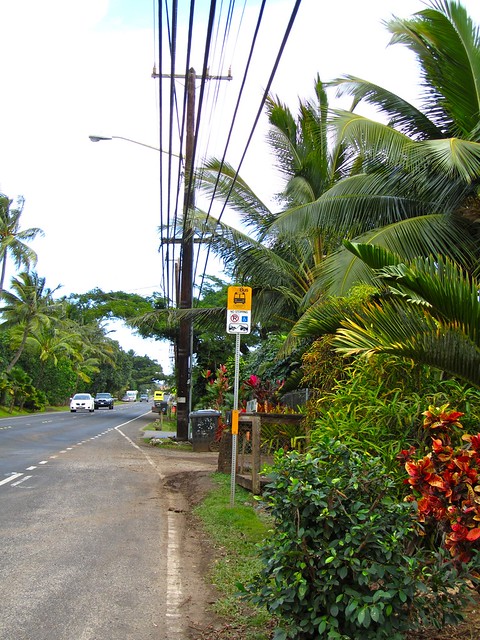 Now For the Caveats

Using the bus to get around Honolulu is definitely a great way to save money. But I’d be lying to you if I said it was also always fast and efficient. It isn’t.

Here are the things you should be aware of about TheBus on Oahu:

Overall, though, using TheBus is a great, affordable way to get around Honolulu. All of the buses are handicap-accessible, and most even have bike racks on the front.

Plus, riding the bus will help you get a better feel of how the locals get around. You’ll feel less like a tourist, and more like you fit in. And that’s always an adventure worth having.

For more useful info on TheBus, visit the official website, or this helpful Wikipedia page which lists all the routes.

Need more help planning your Hawaii trip? Check out this guide on where to stay in Hawaii.

Do you use public transportation while in new cities? If so, what are some of your tips and tricks?

45 Comments on “Travel Tips: Using The Bus to Get Around Honolulu”