The original plan had been this: Wake up early, make the drive to Smith Rock State Park before the clouds were due to roll in, and take an easy hike along the Crooked River.

And yet, two hours into our morning and we were standing at the top of the Misery Ridge trail – the most difficult trail in the park. 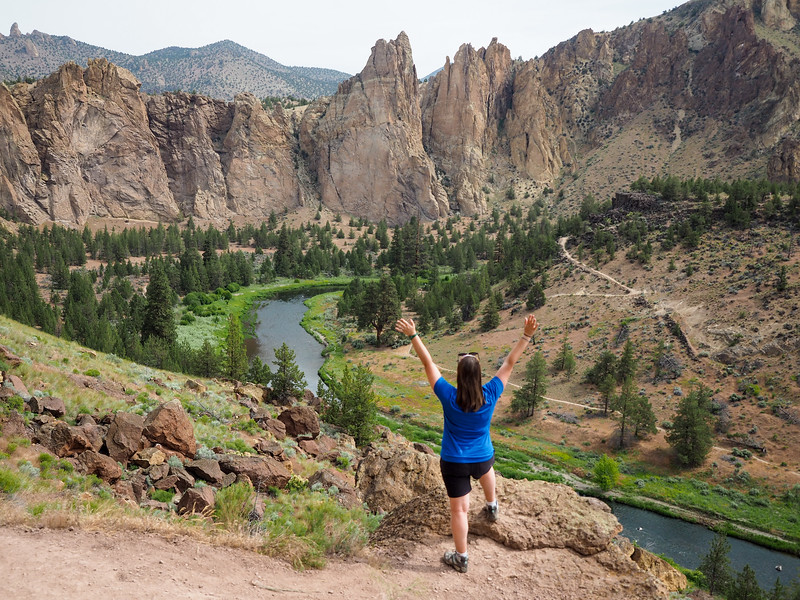 So how did we get here?

Well, it's simple, really: my partner, Elliot, is always up for a challenge or adventure, and I can't say no to a great view. Even if it does mean hiking nearly a mile up the side of a mountain.

Smith Rock State Park is located in central Oregon's High Desert, near the towns of Terrebone and Redmond, roughly a 40-minute drive from Bend. It's famous for its jagged rock face that rises up to 600 feet above the Crooked River, which lives up to its name as it snakes along the canyon floor.

This may be the first time you're hearing about this state park, but Smith Rock actually has a couple of claims to fame.

First, Smith Rock is a mecca for rock climbers. In fact, it's often considered “the birthplace of modern American sport climbing,” and has more than a thousand bolted climbing routes.

On top of this, three years ago Travel Oregon named Smith Rock one of the 7 Wonders of Oregon.

And since it was super close to where Elliot and I were staying in Bend, we couldn't pass up a visit. 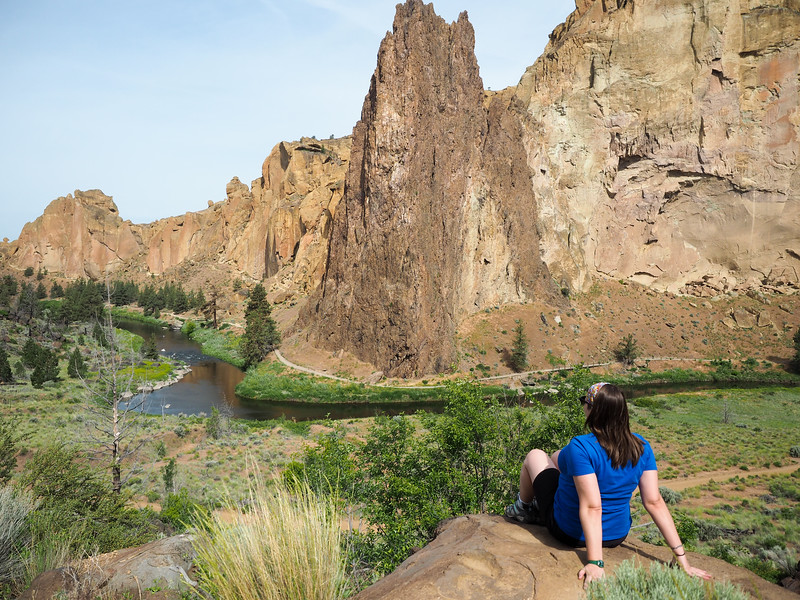 But, like I said, our original plan had been to head down into the canyon and take a nice stroll along the 2.2-mile River Trail. This trail is wide and relatively flat (also great for mountain biking), yet still offers up fantastic views of the tuff and basalt cliffs. (And in case you're wondering what “tuff and basalt” are, basically it's hardened volcanic ash and lava! This is volcano country, after all.)

As soon as we got to the upper parking lot near the Rim Rock Trail and had a look down into the canyon and over to Smith Rock itself, though, I had a feeling we were going to be throwing that original plan out the window. 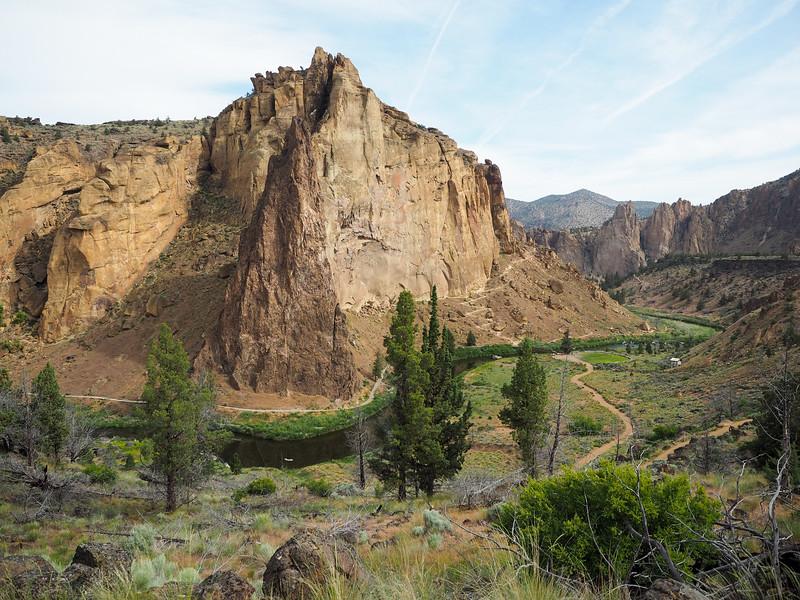 Because the beginning switchbacks of the park's most difficult trail were in plain view. And the trail didn't really look THAT difficult. And I was already imagining what the view from the trail would be like…

By the time we had taken the Canyon Trail down to river level, we'd already decided to just go for it. We had plenty of water and sunscreen with us; I was already wearing my hiking boots; and the sun was hanging out behind a very thin layer of clouds that made it feel a bit less warm.

And so we crossed the bridge over the Crooked River and immediately started up the first switchbacks of the Misery Ridge Trail.

The first set of switchbacks wasn't really that bad, and both of us assumed that the trail would flatten out once we got to the back side of Smith Rock.

But it didn't. The trail continued to go up and up and eventually led to even more switchbacks.

To be fair, I've hiked more “miserable” (i.e. more difficult) trails before. (Angels Landing, with its 1500 feet of elevation gain and half a mile of using fixed chains to scramble up a narrow spine of rock comes to mind.) But since I hadn't really prepared for this hike, I found myself needing to stop more often on the switchbacks than I would have liked.

But I just pretended to be taking lots of photos. (That's the secret, my fellow non-hiker folks.) 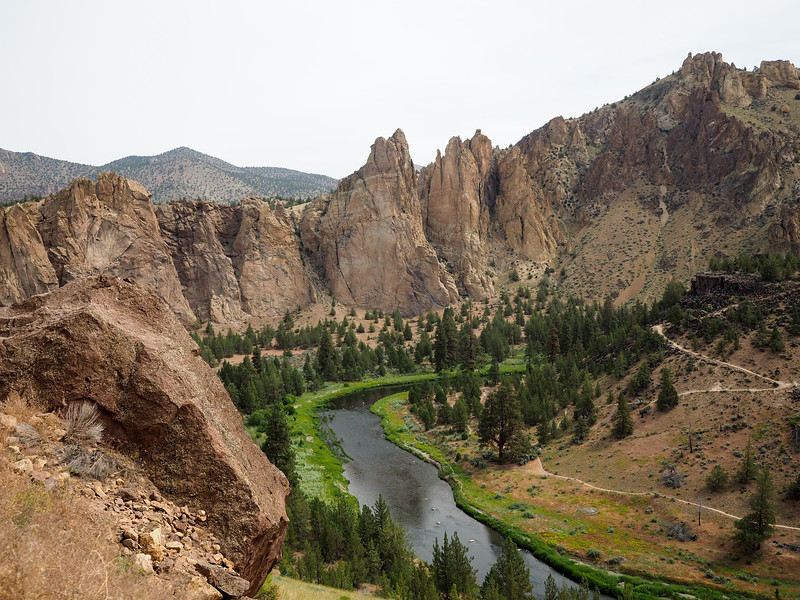 We eventually made it the 700 feet up to the top of Misery Ridge, where you do get amazing views out over the canyon and nearby rock formations.

From here, we headed across the top of the ridge to the parts you can't see from the parking lot or canyon floor. Namely: Monkey Face!

This rock column is named for the fact that the top kind of looks like the face of a monkey. Climbers are common here, and you can sometimes even see slackliners. We stopped for a while to watch, and to enjoy the views out over the high desert. On clear days you can see the peaks of the Cascade Mountains in the distance. 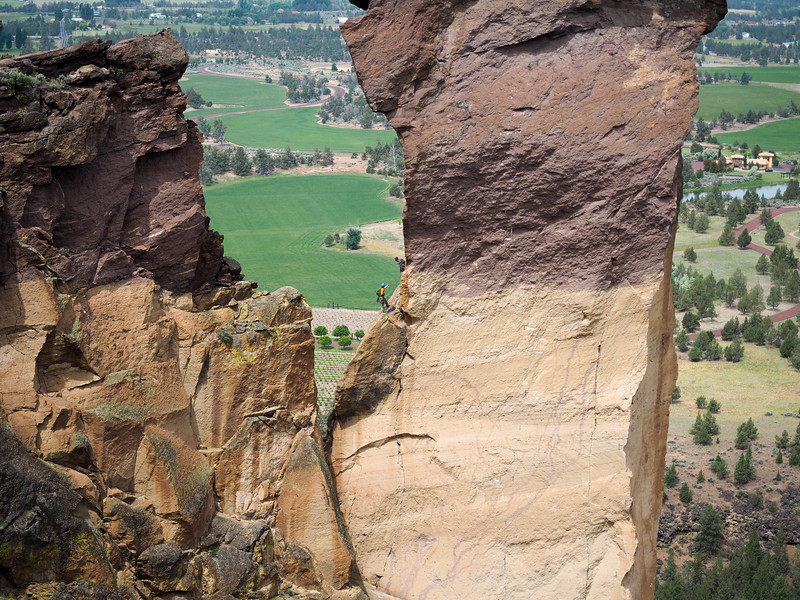 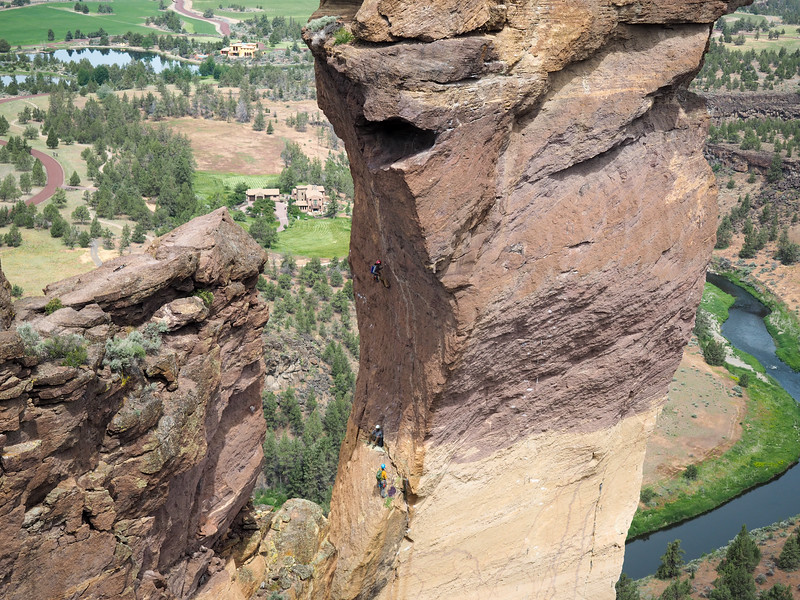 Then it was time to make the trek down the back side of Smith Rock. Be careful here, as the trail (which goes down to the right from the Monkey Face viewpoint) is extremely steep and covered in loose rock/sand. Even with good hiking boots I was slipping all over the place!

We soon met up with the Mesa Verde Trail at the base of Monkey Face, and continued downhill to the left until the trail merged with the flat River Trail. (Yay no more climbing!)

We followed the River Trail back around to the front side of Smith Rock, stopping briefly to dip our hands into the Crooked River and to watch lots of climbers tackling routes up the red and orange rocks.

Our total hike was just under 4 miles and took us a little over 2 hours total (and that was with plenty of stops!).

Afterwards, we headed back to the car and rewarded ourselves with lunch at Terrebone Depot, a restaurant in an old train station just a few minutes from Smith Rock. (Try the buffalo nachos!)

If you want to hike at Smith Rock

Think you might like to take a hike at Smith Rock State Park? Well here are some things to know: 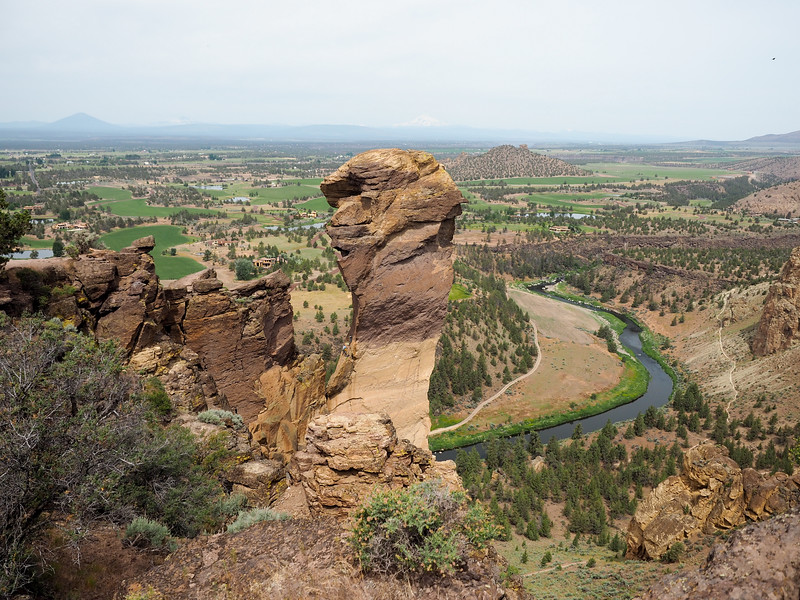 If it's really hot and sunny when you start your Misery Ridge hike, I recommend doing the hike in reverse – head left after the bridge, and start the hike on the River Trail. This way you'll go up the switchbacks on the back of Smith Rock (near Monkey Face), keeping you out of the direct sunlight on the most difficult part of the hike (i.e. the “up” part).

And if you don't want to hike Misery Ridge? There are plenty of other easier trails to choose from, many of which still have great views of the surrounding landscape and climbers. Check out the Smith Rock trail guide here.

Have you heard of Smith Rock before? Is it someplace you'd like to take a hike? 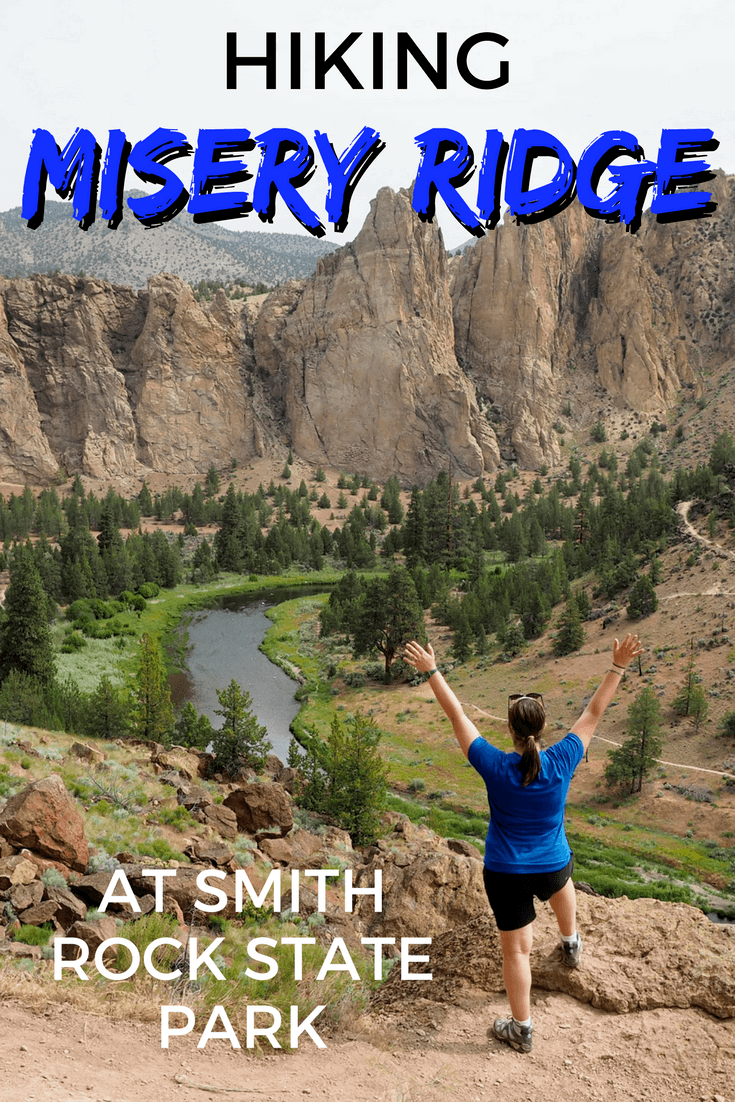 39 Comments on “Hiking a Ridge Called Misery in Oregon”