I Hiked to Angels Landing and Didn’t Die!

The park rangers at the Zion National Park visitor center told us not to go.

A storm might be headed towards Zion, they said. And the last place you want to be stuck during a storm is hanging onto a chain 1500 feet above the ground on the skinny spine of rock that leads to Angels Landing.

Part of me was relieved – I'm not *really* a hiker, and the toughness of the 5.2-mile Angels Landing hike was secretly psyching me out. But a larger part of me was really bummed. I had been prepping for this hike – with its 1500-foot elevation gain, steep switchbacks, and narrow path with 1000-foot dropoffs on each side – for months, and had even switched up our itinerary at the last minute in hopes of catching good weather.

But if the Rangers said we shouldn't go, we probably shouldn't go. After all, people have DIED hiking to Angels Landing.

Elliot and I filled up our CamelBak and water bottles anyway, and hopped on a park shuttle. We decided we would hit up some of the shorter hikes in the park instead and try to make the best of it.

But, by the time we had taken some photos at Big Bend (with perfectly clear blue sky, I might add), we both looked at each other and said “Let's just do it.”

On the shuttle back to the hike's starting point at The Grotto, we came up with a plan: the dangerous part of the Angels Landing trail doesn't come until the final half-mile at the top. IF clouds began to roll in by the time we finished the West Rim Trail, we would simply turn back. But we both agreed we would regret it if we didn't at least try. 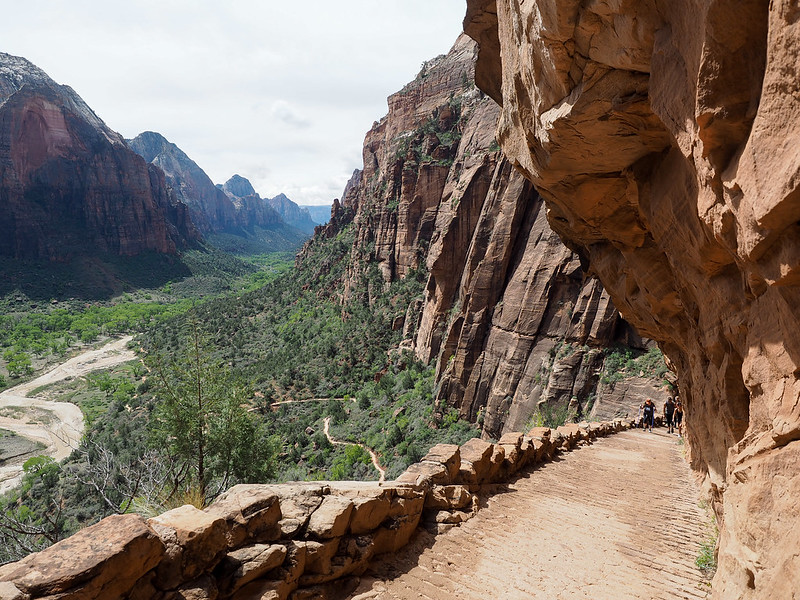 The valley floor was still cloaked in morning shadow when we got to the trailhead, even though we were starting our hike around 9:30 a.m.

We set out on the West Rim Trail, which follows the Virgin River briefly before starting to climb steadily along a series of switchbacks. The sun was shining, the trail was blissfully not crowded, and we exclaimed all the way that, yes, we were crazy enough to be headed for the fin-shaped rock towering more than a thousand feet above our heads.

The first 1.3 miles wasn't too bad, though the altitude (more than 4,000 feet up) definitely made itself known.

After the first set of switchbacks, we entered into Refrigerator Canyon, which is a relatively flat stretch of trail through a cool and shady canyon – perfect after the first semi-steep portion of the trail (what can I say? I'm a sweat monster when I'm being active). 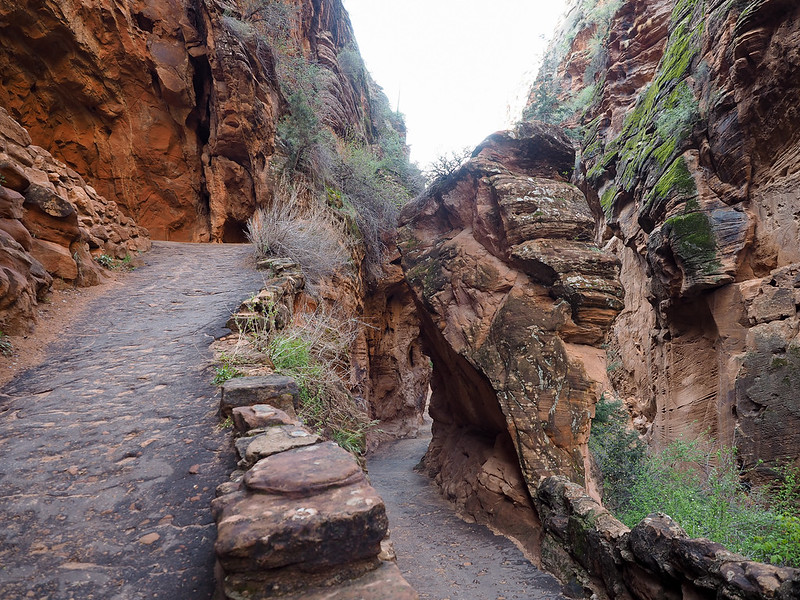 After the respite of the canyon, we made our way to Walter's Wiggles. These “wiggles” are a series of 21 steep (but thankfully short) switchbacks that go up the back of the mountain leading up to Scout Lookout. Zion National Park's first superintendent, Walter Ruesch, constructed this part of the trail in order to make Angels Landing more accessible for visitors. He must have been a bit of a masochist with how steep these switchbacks are, though – my legs (and lungs) were burning by the time we got to the top.

Scout Lookout is 2.1 miles into the Angels Landing hike and sits more than 1000 feet above the starting point of the trail. From here, you get great views out over the valley below, and you can see the looming spine of Angels Landing itself ahead.

This is where the really challenging part of the hike begins – from here on out, you'll be hanging on to fixed chains, clambering over slippery sandstone, and traversing steep and exposed sections of trail. Oh, and did I mention that if you fall you'll probably die?

People HAVE died on this trail – at least 15 of them as of early 2018, according to the National Park Service. This isn't a trail for everyone. Elliot and I briefly wondered if it was even a trail for us.

We spent some time at Scout Lookout taking photos and mentally preparing ourselves for the challenging climb ahead. If you're afraid of heights or not particularly confident in your fitness level, I would suggest ending your hike at Scout Lookout. Climbing the spine of Angels Landing is taxing on your legs, your arms – and your nerves. 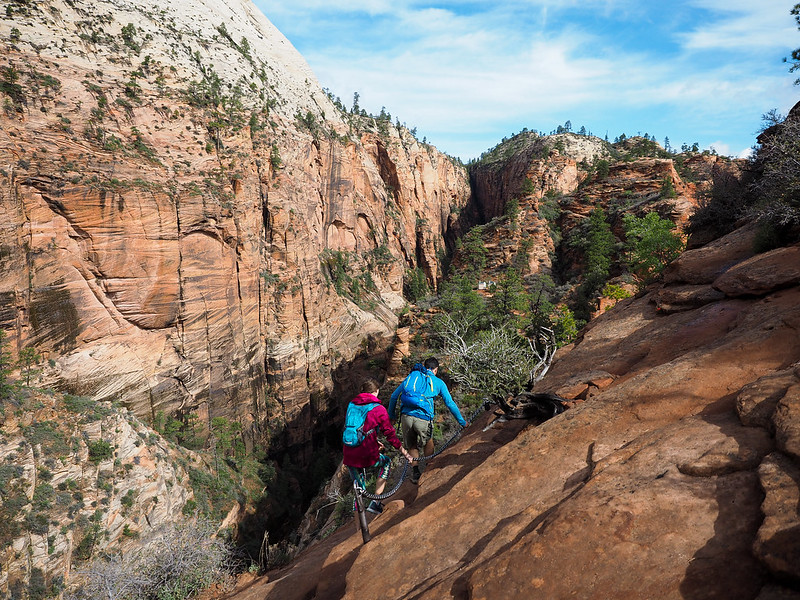 I've written before about how much of a non-hiker I am. But, leading up to this trip to the American Southwest, I knew that I wanted to challenge myself (and, let's be honest, see some amazing views). Angels Landing is one of the most iconic hikes in the national parks system (and certainly in Zion), and I knew I could do it if I prepared properly. I spent months going to cardio kickboxing classes regularly and worked on strengthening long-unused muscles at an adult gymnastics class.

By the time we stood on Scout Lookout eyeing those chains ahead of us, I knew I could do it. (I'm also not afraid of heights, though, so I suppose that probably helped, too.)

Plus, the spine section of the trail is only about half a mile – how difficult could it possibly be?

Well, let me tell you that it's difficult. And kind of terrifying.

Not only do you have to scramble up rough sandstone “steps,” but if you're short like me you'll also have to pull yourself up onto ledges using the fixed chain, and probably slide down some exposed sections on your butt. All with 1000+-foot dropoffs, sometimes on both sides of the narrow trail. 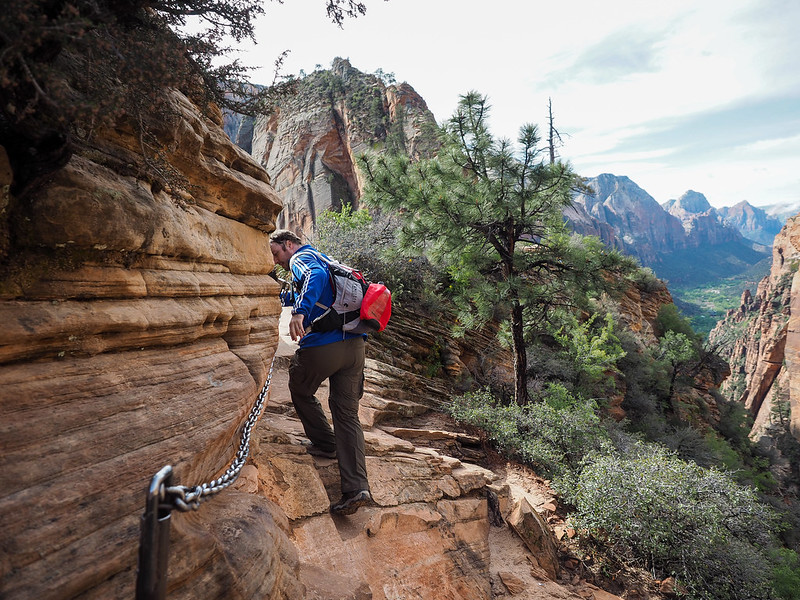 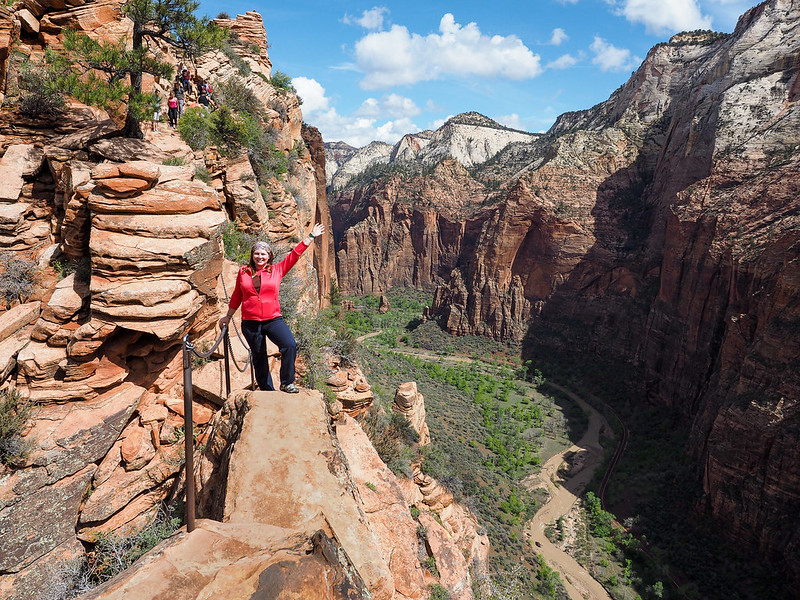 This trail is NOT suitable for anyone with even a mild fear of heights, and I also wouldn't recommend it to anyone who's very out of shape. It's technically only a half-mile-long portion of trail, but it feels much longer thanks to the fact that you're climbing nearly straight up and expending a lot of energy to do so.

By the time we finally left the last section of fixed chain behind, my legs were feeling a bit shaky and I was once again drenched in sweat. 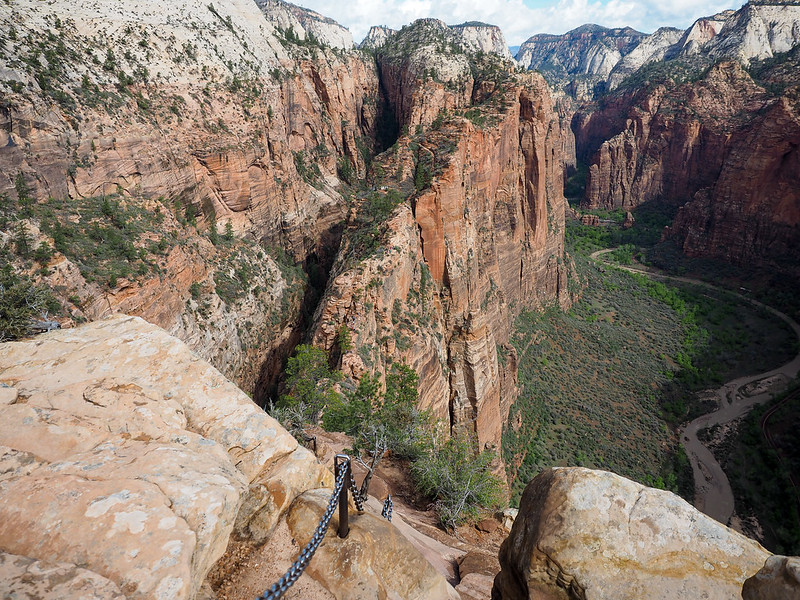 But we did it. We made it to the top of Angels Landing.

And damn did it feel good.

Angels Landing got its name in 1916 when a man named Frederick Fisher was out exploring Zion with friends. Upon seeing the fin of rock rising up out of the canyon, Fisher apparently stated that “Only an angel could land on it!”

Well, call us angels then.

We spent the next 20 minutes or so perched at the top of Angels Landing, munching on snacks (and trying to keep them safe from a band of fearless chipmunks), and congratulating ourselves. Thankfully the weather had remained perfect all morning – the Rangers are right that the top of this trail is NOT somewhere you'd want to be in a storm. 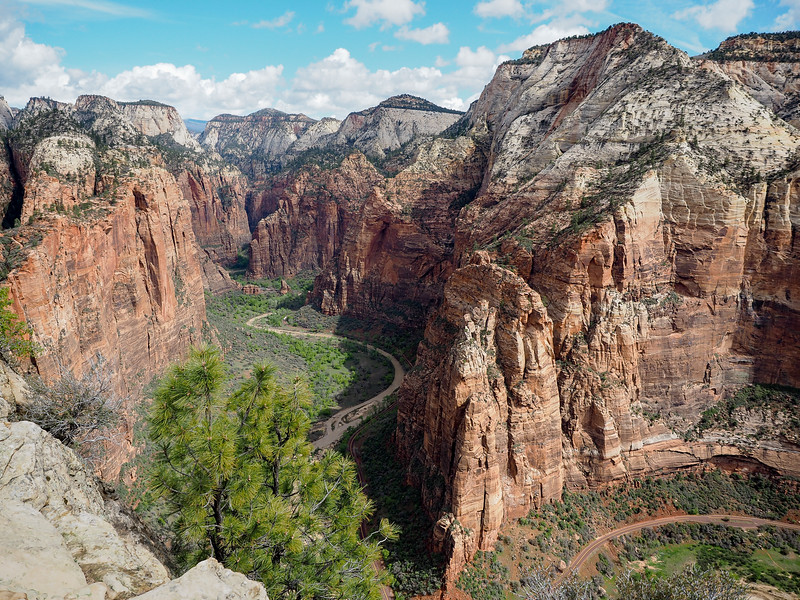 After a few proof-that-we-did-it photos, we decided to head back down. It had taken us more than two hours to reach Angels Landing from the start of the trail (a little over an hour to Scout Lookout, and then about an hour to get up the spine), and we wanted to get down before the afternoon crowd of hikers arrived.

Not starting the hike as soon as we got into Zion had been a minor mistake – by the time we were heading down the chain around noon, there were large groups of hikers making their way up. This caused bottle-necks on the trail, since most sections on the spine are too narrow for two people to pass each other comfortably. It meant having some patience and taking turns letting groups pass when you reached a section of trail where you could safely wait off to the side for a few minutes.

It was also on the way down that we encountered quite a few people that should NOT have been attempting this trail – like a dad with a baby strapped to his back who was clearly not comfortable gripping the chain, and a college-aged girl in hot pink Sketchers who was literally sliding, skiing-style, down portions of the trail and squealing the entire way.

I actually found myself thinking that only 15 deaths on this trail was actually impressive. 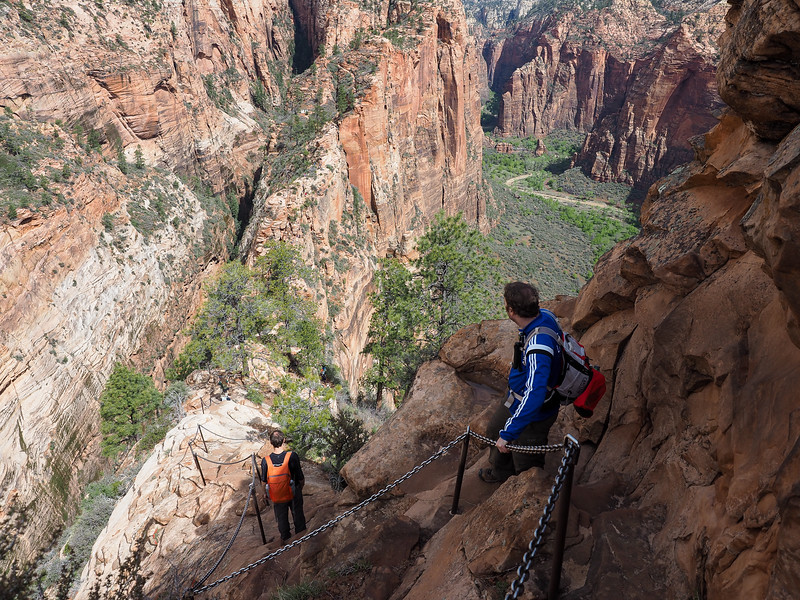 Going down was a lot easier than climbing up, but our legs were definitely shaking as we made our way back down Walter's Wiggles and the switchbacks on the West Rim Trail section. I found myself saying more than once that “I don't remember this being so steep on the way up!” My thighs and calves would be sore for the next two days. 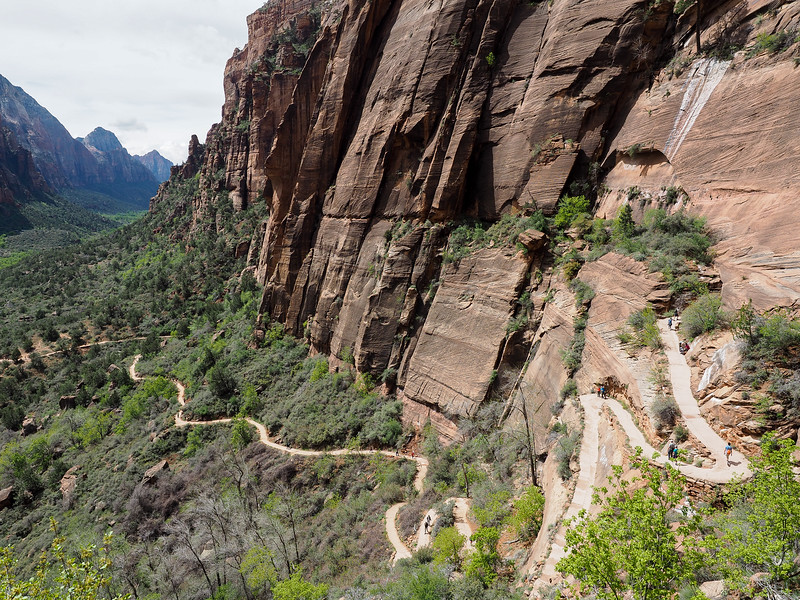 The sun was still shining when we made it back to the Zion shuttle stop at The Grotto, and Elliot and I exchanged a high-five as we sat down to wait for a ride. I'm usually a strict rule-follower and listener-to-authority, but in this case I was really glad that we went with our gut (and the weather forecast on my phone) and tackled the hike anyway.

Hiking to Angels Landing is definitely an experience I'll never forget, and I'm so proud of both of us for making it to the top!

If you're going to attempt the Angels Landing trail at Zion National Park, there are a few things you should know before you go:

And, of course, don't forget to take some time at the top to appreciate your accomplishment – it really IS something to be proud of!

Don't think this hike is for you? Then check out 5 Things to Do in Zion National Park That Don't Involve Hiking.

So what do you think? Would YOU tackle Angels Landing? 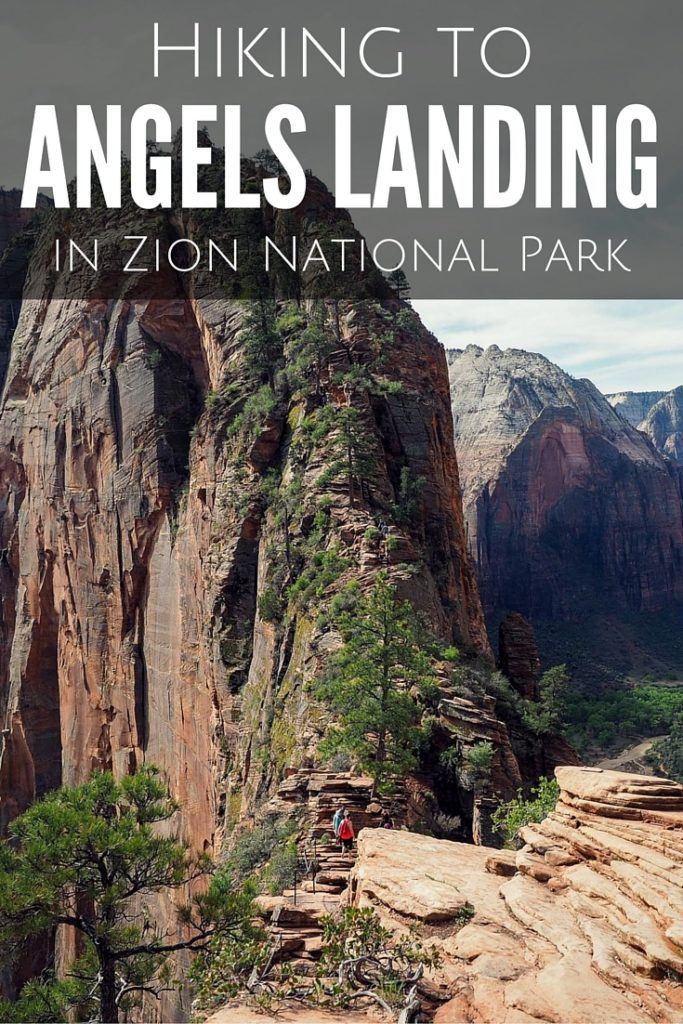 61 Comments on “I Hiked to Angels Landing and Didn’t Die!”