3 Delicious Things to Do in Rome if You Love Food

I tell people all the time that I am not really a “foodie” traveler; I'm no expert when it comes to local cuisine, and I don't usually go home to try to replicate recipes for my favorite dishes.

I wouldn't call myself a culinary traveler at all – but I do love to eat. And there are some destinations where my love of eating food turns me into a temporary foodie.

One of those places is Italy.

You can't really visit Italy and NOT get into its food scene. Italy is home to so many iconic dishes, and I definitely turn into a carb-fueled glutton whenever I travel there. Whether it's Italian cheeses or pastas or wines or pizza, I am all. about. it.

So when my Monograms trip in Europe had me scheduled to spend three days in Rome, I knew exactly what I wanted to spend my time doing: EATING EVERYTHING.

Since every Monograms trip gives you the option to sign up for all sorts of extra tours and activities, I decided to focus my time on some food-related things I didn't do on my first visit to Rome. This included multiple food tours and even a cooking class!

Note: This post was brought to you as a result of the Monograms trip, a project between Monograms and iambassador. As always, all opinions are completely my own – I maintain full editorial control of the content published on this site.

If you're interested in delving into the food scene in Rome, here are the top 3 things you won't want to miss:

Top foodie things to do in Rome

Even though I just said I don't normally consider myself a foodie traveler, I actually LOVE taking food tours. Food can often offer a unique window into a country's culture and overall identity, and most food tours are equal parts history and eating extravaganza.

In Rome, there are several great food tour options, with the best ones focusing on specific neighborhoods. Monograms partners with Eating Europe for its food tours in Rome, which I was really excited to learn since I've taken this company's tours in many cities throughout Europe.

Rome's Trastevere neighborhood is known for its funky and hipster vibes along with its food. A walking food tour here incorporates a lot of the neighborhood's history, as well as some of the best “street food” that the locals love to eat.

Some of the things we tried on this 3-hour tour included supplí (fried risotto balls), Porchetta sandwiches, Pecorino Romano cheese, a new pizza dough treat called Trappizino, gelato, and more. I loved that we visited small, local spots and that our guide seemed to know everybody! (Book this tour here.)

This was my first time visiting the Testaccio neighborhood, which still has a very local and non-touristy feel. Again, we visited a lot of small, independently-owned shops and restaurants, and really got a feel for the neighborhood through food.

This food tour is set up almost like a progressive meal; we started out with aperol spritzes as an aperitivo, moved on to cheeses and cured meats, then had a sit-down meal of pasta and oxtail before finishing off the night with gelato.

This was one of the least-touristy-feeling food tours I've been on. (Book this tour here.)

Other Eating Europe food tours to check out in Rome include:

Most of these tours run anywhere from 70-100 Euro per person, but remember that this is both a walking tour AND a multi-course meal! When I do food tours, I always plan them around meal times so I can replace at least one meal with a food tour.

Full disclosure: I don't really like to cook. I wish I could say cooking was fun for me like it is for some of my friends, but it's not; for me, cooking is usually really stressful! Thankfully my husband loves to cook and handles most kitchen-related things at home.

But, when in Rome…

I decided to suck up my fears and sign up for a cooking class in Rome. These classes are pretty popular, and you can learn how to make all sorts of tasty dishes. I opted for a pizza and gelato-making class since those two things sounded pretty easy to make (and also delicious to eat).

Monograms set me up with a cooking class with InRome Cooking Classes, which has its school not far from the beautiful Piazza Navona. The class was suitable for all skill levels (and even kid-friendly!), and was a lot of fun.

We started out making gelato (did you know you only need 4 ingredients??) in teams of two, and them moved on to making our own personal pizzas.

The class ended with a feast of everything we made, and we all went home with copies of all the recipes we used.

I'm not sure I've been transformed into a master chef, but this was a really fun activity in Rome that I would highly recommend trying.

(If you're interested in taking this same class, it was this one! But there are lots of cooking class in Rome to choose from – find a lot more here.)

If tours and classes aren't your thing, you can of course also go the DIY route and visit food markets and halls on your own. There's no shortage of food markets in Rome; nearly every neighborhood will have some sort of market, even if it's just a small weekly farmer market in a square.

Some of the biggest and best food markets in Rome include:

And of course, you can also spend your time in Rome just EATING. There are so many great restaurants serving up traditional Italian food that you can easily while away your whole trip hopping from one to another.

My main tip for finding good places to eat in Rome: Avoid anything around the tourist hot spots. If a restaurant has a sign board outside with photos and someone standing there trying to convince you to sit down, you don't want to eat there.

My other tip for eating in Rome: Pack stretchy pants.

Do you travel for food? What kind of foodie experience would you most like to have in Rome? 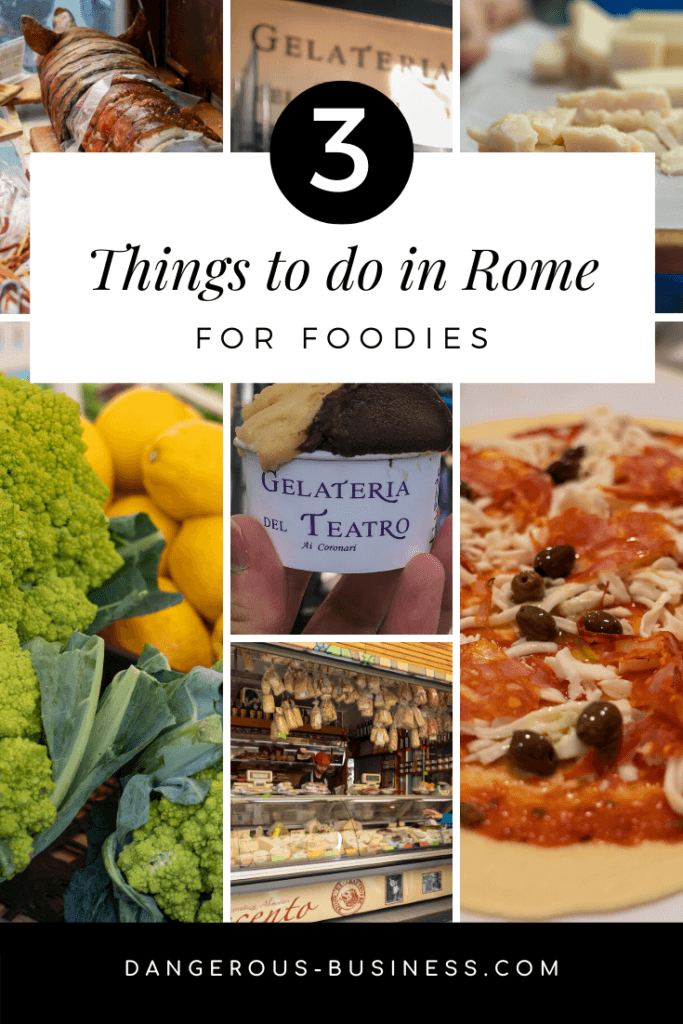