The Isle of Lewis and Harris: Scotland’s Best-Kept Secret?

If you had asked me two months ago about my favorite part of Scotland, I would not have hesitated to tell you about how much I love the Isle of Skye, the wing-shaped island in the Inner Hebrides that captured my heart on my first trip to Scotland.

But if you asked me today about my favorite part of Scotland? I might actually have to shift it to the Outer Hebrides and the Isle of Lewis and Harris. 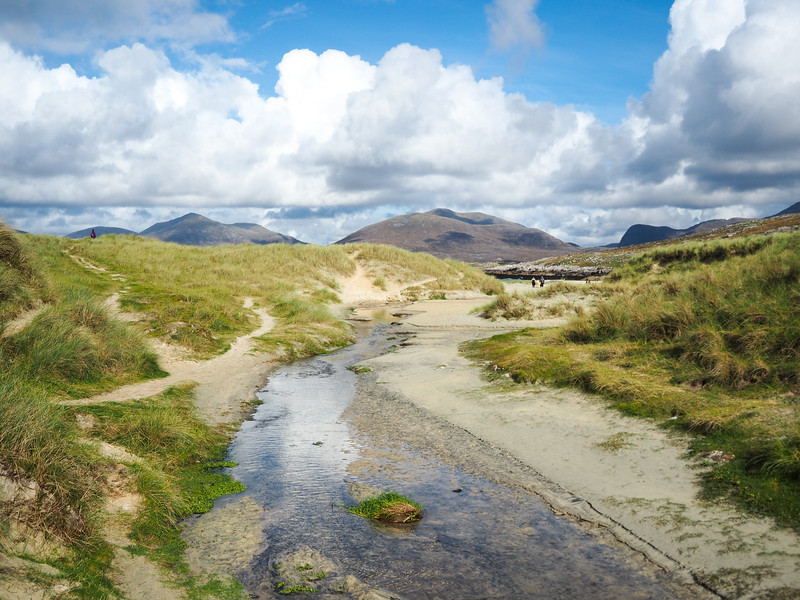 I knew exactly two things about the Isle of Lewis and Harris before I visited in September with Haggis Adventures: I knew that it had a fairly famous circle of standing stones, and I knew that it was supposed to have nice beaches.

And I had no clue that I would fall head over heels for it. 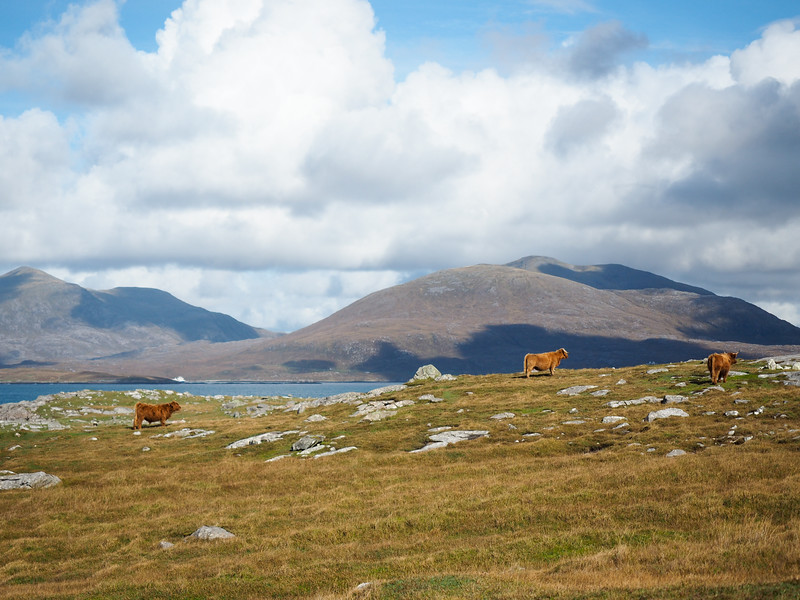 The trip to the Isle of Lewis and Harris started out a bit rocky – literally. The ferry from Ullapool to Stornoway was lurching this way and that in rough seas, making walking around and keeping down food a challenge for many. It was also raining when we made it to our small hostel in Stornoway; not the welcome any of my Haggis Adventures tour mates had been hoping for for our introduction to the Outer Hebrides.

I was being careful to keep my expectations low. I wasn't expecting sun in this wild part of Scotland in late September, and I told myself I'd be happy to simply see the sights I was most looking forward to.

So when the next morning dawned cloudy, I wasn't too let down.

But then something happened on our way to Abhainn Dearg Distillery (the most westerly distillery in Scotland): the quickly-moving clouds began to break up and the sun began forcing its way through. 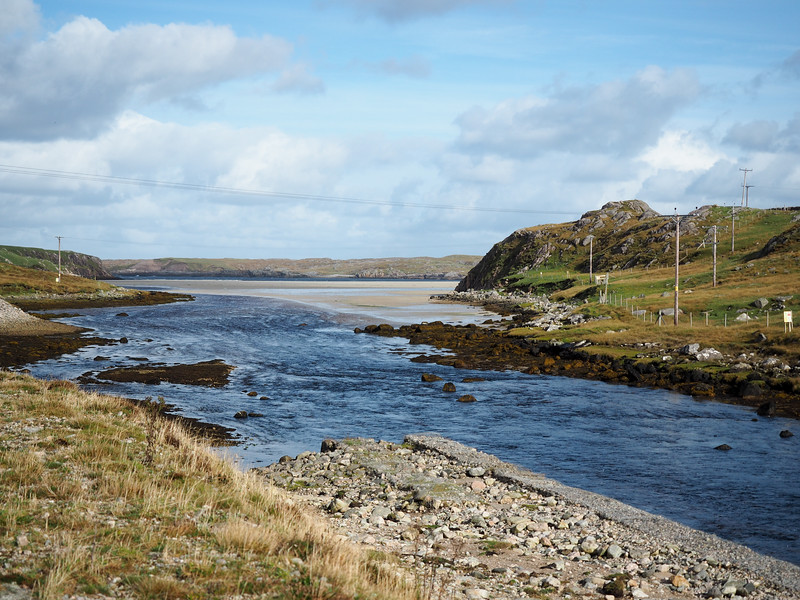 By the time we began our afternoon of sightseeing around Lewis, the sun was overtaking the clouds and everyone was in a great mood. And, lucky for us, the sun followed us around Harris the next day, too! 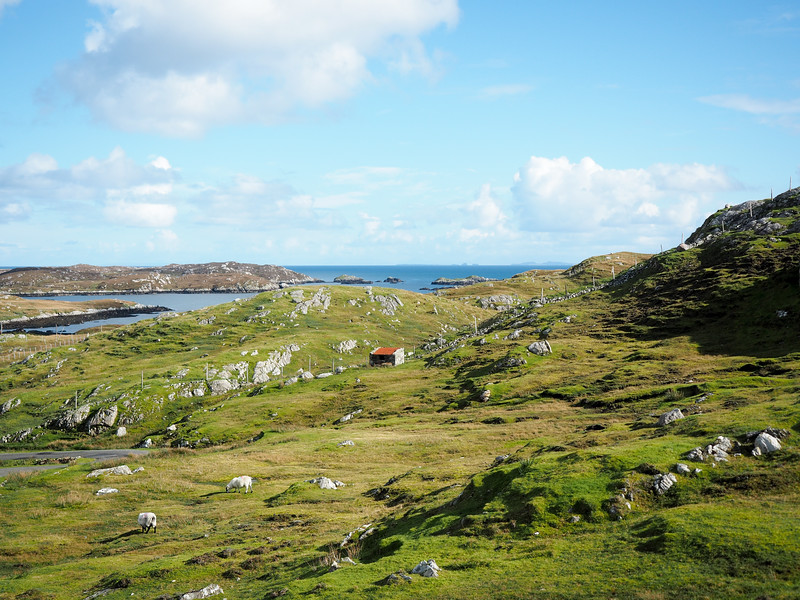 While I know the good weather definitely had an affect on my enjoyment of the island, I have a sneaking suspicion that I would have loved it anyway, rain or shine.

Here are all the highlights from the Isle of Lewis and Harris that made me fall in love with it and be convinced that it might, in fact, be one of Scotland's best-kept secrets: 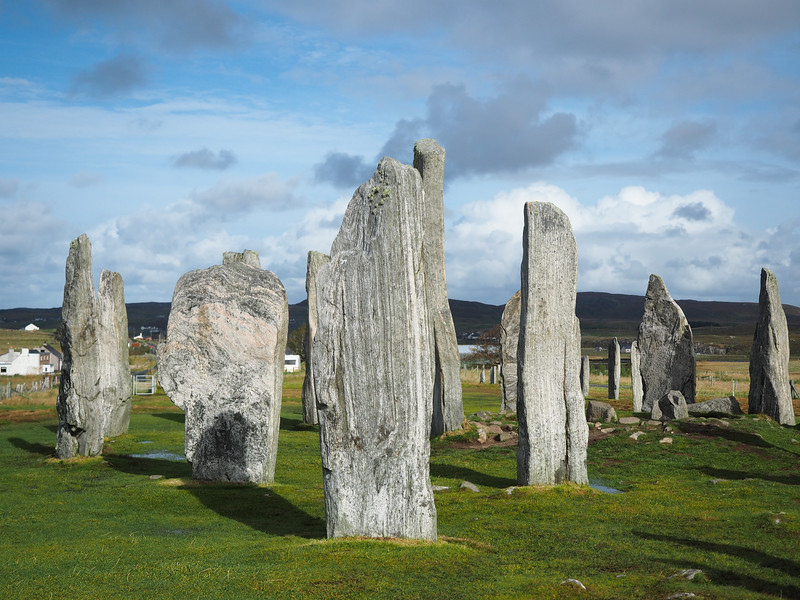 Probably the most famous sight on the Isle of Lewis is the Callanish (or Calanais) Standing Stones. Located on the west coast of Lewis, the stones date back to the Neolithic age – meaning that they're about 5000 years old!! The standing stones consist of a main stone circle and rows of stones brancing off from this in a rough cross shape. 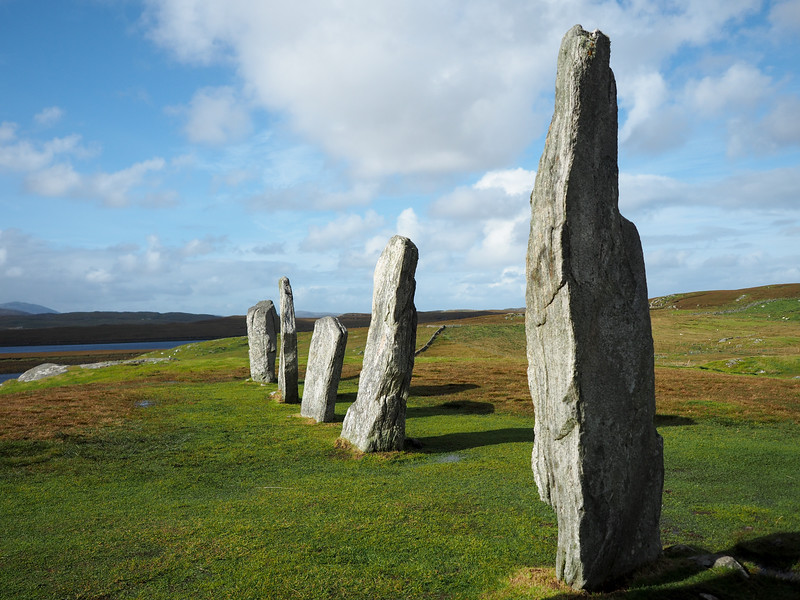 If you've ever visited Stonehenge in England (especially recently), more standing stones might not sound that exciting. But while Stonehenge's famous stones are now roped off and usually very crowded, the opposite is true at Callanish. We were more or less the only people there, and you can walk right up to and around all the stones. 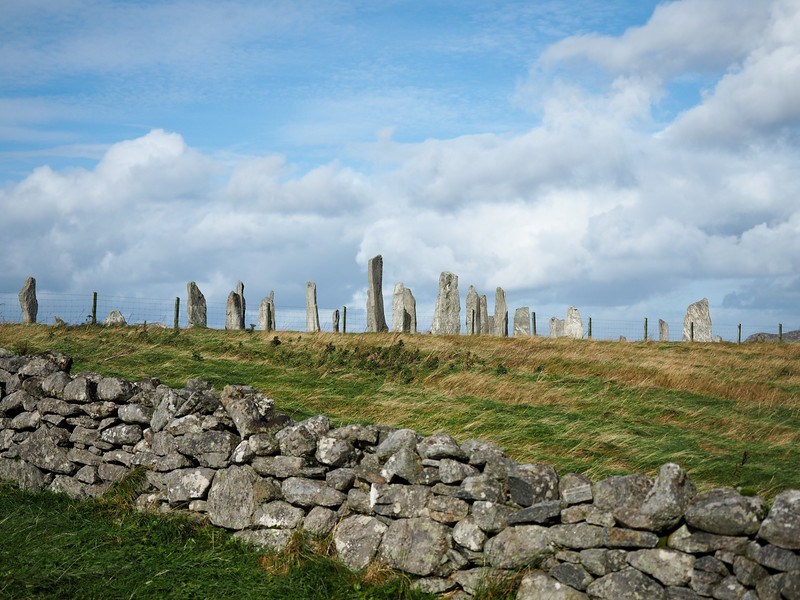 There were plenty of Outlander fans in my tour group, and so of course we all took turns stepping up to the center stone of the circle to see if we would be able to fall back through time and find our own Jamie Fraser. Sadly, none of us turned out to be time travelers. 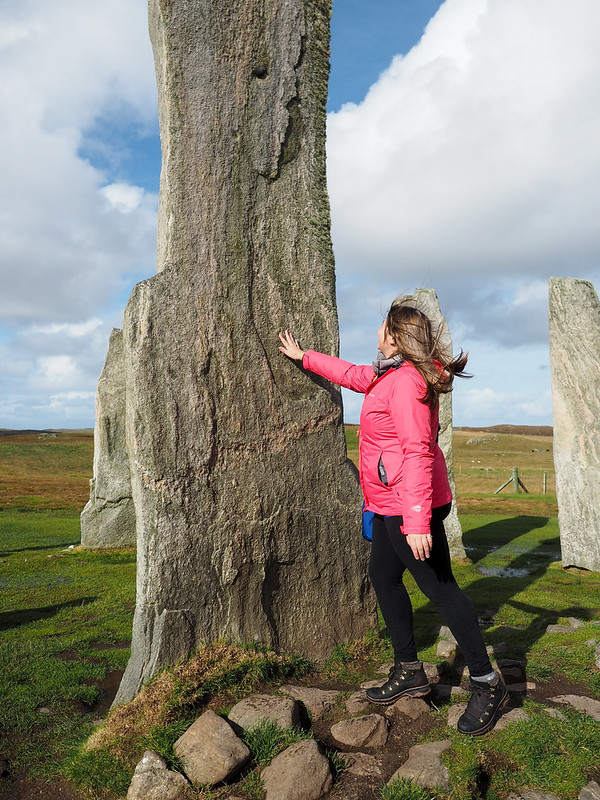 After the high of visiting Callanish, I didn't really care what else we saw on Lewis and didn't bother to read up on the other stops we were making that day. Which meant that I spent the rest of the day absolutely delighted by everything. 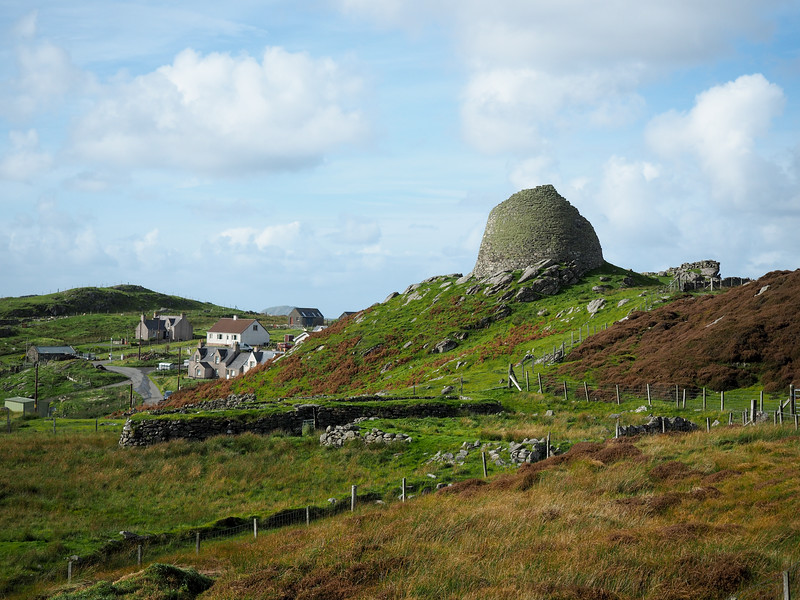 Our next stop was at Dun Carloway, the remnant of a stone broch (small tower) that's roughly 2000 years old. The broch itself is incredibly impressive, and the views of the nearby countryside were beyond beautiful. 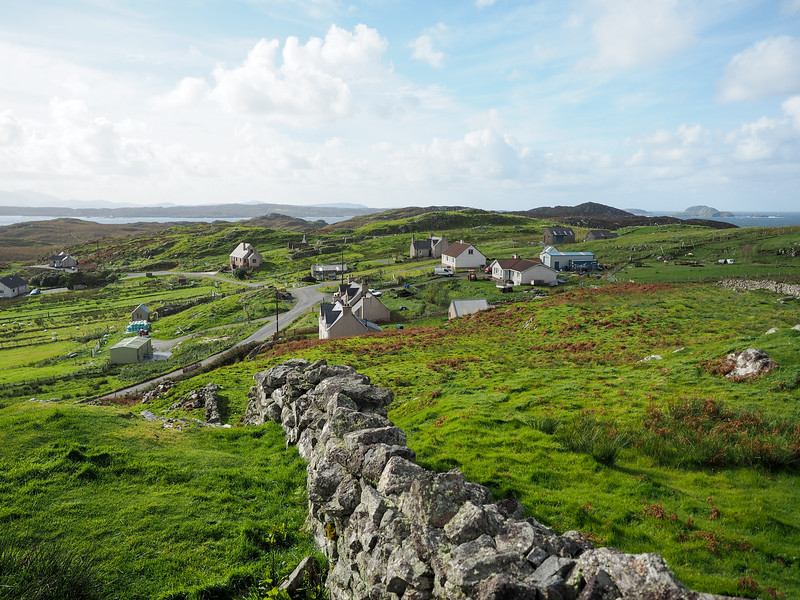 Next we headed to the Gearrannan Blackhouse Village, which today is a cross between open-air museum and holiday spot. The village consists of restored blackhouses – long stone cottages with thatched roofs – and offers up both vacation accommodation and historical demonstrations. 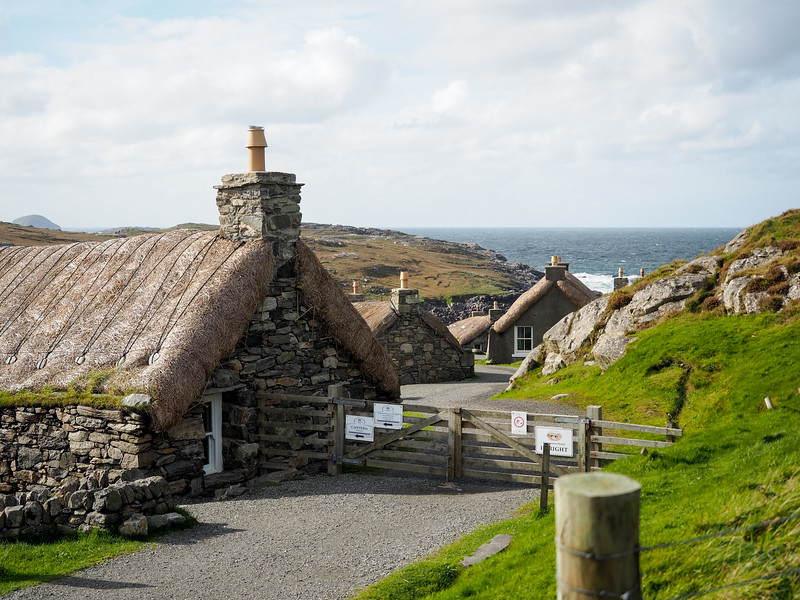 If you've ever been curious about what a peat fire smells like (many Scots used to and still do burn peat instead of wood), they usually have at least one burning here. 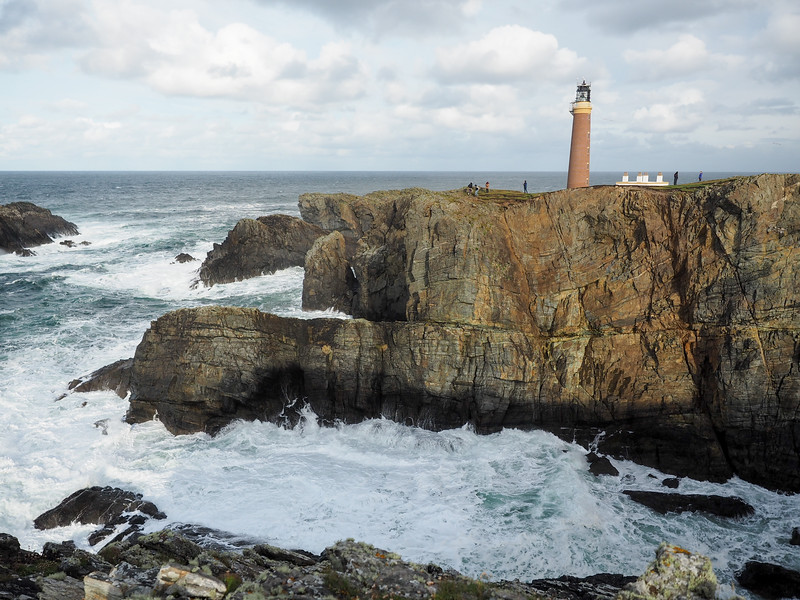 Our last stop of the day on the Isle of Lewis was at the very northern tip of the island, AKA the Butt of Lewis. We went on a short hike here along the coastal cliffs, taking in the amazing views out over the North Atlantic and keeping warm against the biting Scottish wind.

The following day saw us crossing over to Harris, the southern part of the island. Our guide, Mahri, told us that many people think Lewis is called after the Gaelic word for “marshy,” while Harris means something along the lines of “higher,” since this is where you find mountains.

Our major stop of the day was at Luskentyre Beach, which has been named one of the best beaches in the United Kingdom. And I can definitely see why. 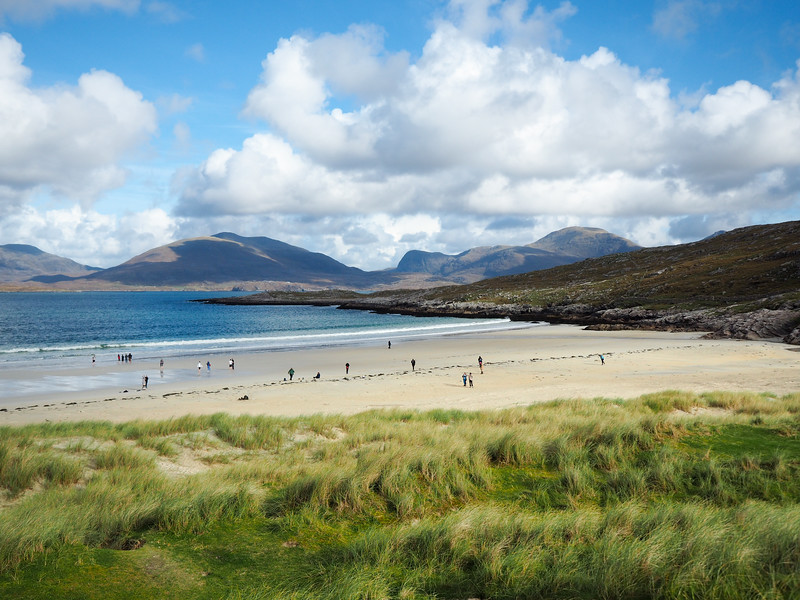 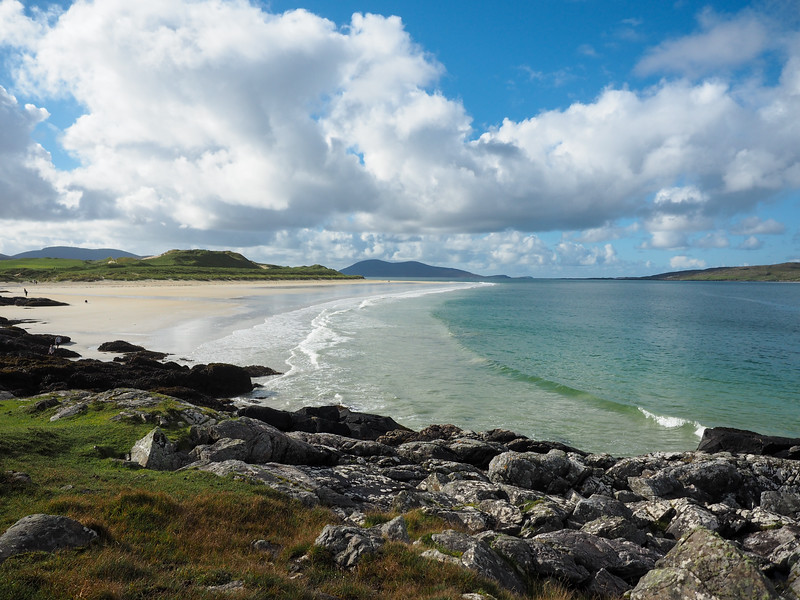 We had free time at the beach to splash in the waves, frolick on the sand, and climb the rocky hill above the beach to get better views and visit with some hairy hielan' coos (hairy Highland cows). 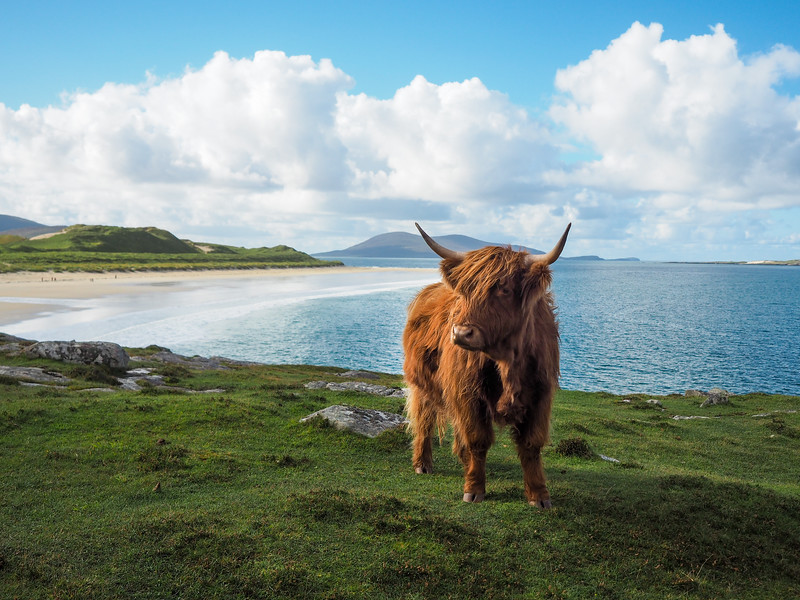 This probably doesn't look anything like the Scotland you've imagined – but that's what makes it so special. 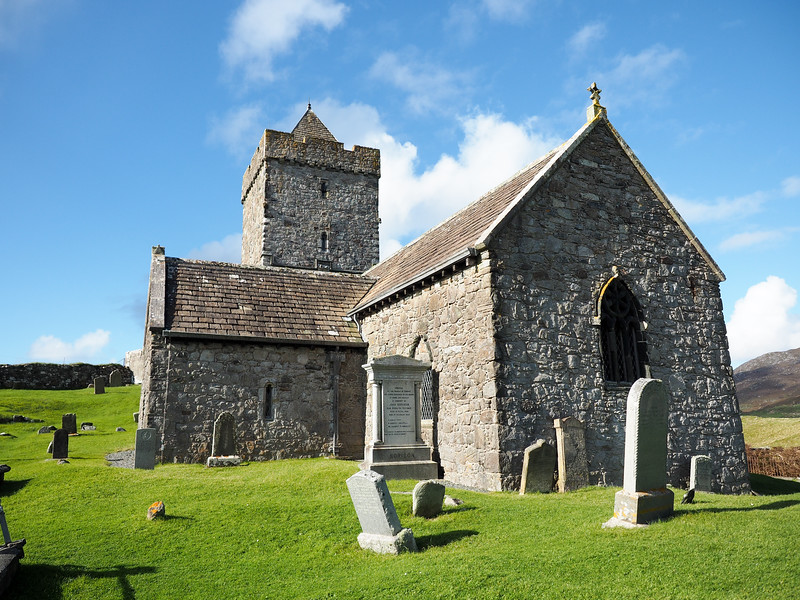 Our final stop on Lewis and Harris was at St. Clement's Church in the tiny town of Rodel. The church itself isn't particularly amazing, but the surrounding scenery definitely is. If you walk up the road from the church and climb a hill, you can see the Isle of Skye on a clear day. 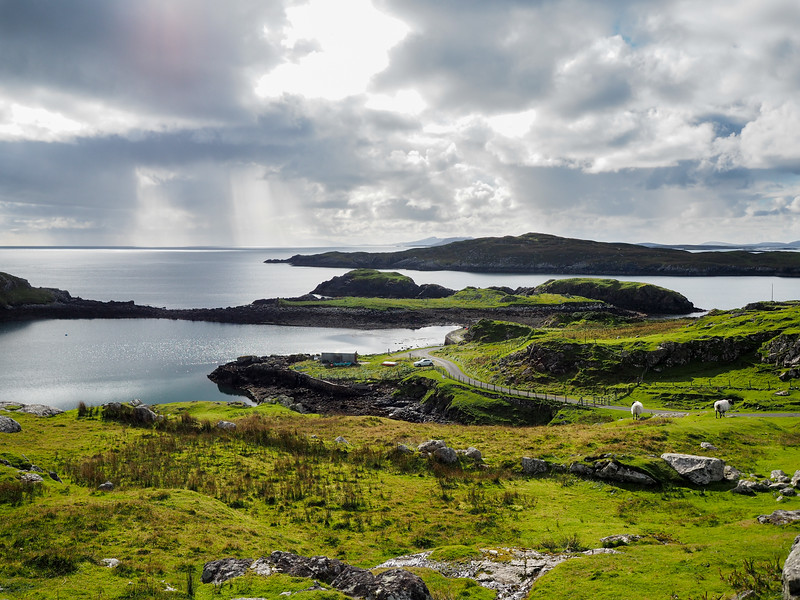 Since you have to take a ferry to Lewis and Harris (and because you just don't hear as much about it as the famous Isle of Skye), you'll find far less visitors here than on some of Scotland's other islands. There were definitely places where we saw no other tourists, and we were pretty much the only people staying at Heb Hostel in Stornoway.

So if you want to experience the best of the Hebrides withOUT the crowds, definitely head to the Isle of Lewis and Harris.

Have you ever been to any of Scotland's isles? If not, do you want to head to Lewis and Harris now?

*Note: I was a guest of Haggis Adventures on their 5-day Hebridean Hopper tour. But, as always, all opinions are 100% my own.

44 Comments on “The Isle of Lewis and Harris: Scotland’s Best-Kept Secret?”