Home » Europe » Bulgaria » 8 Things You Might Not Know About Bulgaria

Chances are, Bulgaria isn’t a country that’s high up on your travel list. It was fairly high on mine before this summer simply because I've had a slight obsession with Eastern Europe for a few years now. But I realize most people aren't like me.

Part of the reason that most people have never considered traveling to this somewhat-obscure country probably lies in the fact that nobody seems to know very much about Bulgaria. I didn't even know much about it before visiting, to be honest. But I assure you that it's much more interesting than you probably expect.

Read these fun facts about Bulgaria, and see if you aren’t a bit intrigued!

Bulgaria is one of only a handful of countries in the world where a shake of the head means “yes” and a nod means “no.” This can of course be confusing when you’re trying to converse through gestures with a local who doesn’t speak English, but thankfully most of them realize you don’t have a clue.

If you thought Scotland was the only place known for its bagpipes… think again! Bulgaria (along with a handful of other Balkan/Eastern European countries) also has a bagpipe as a traditional instrument. Called gaida, Bulgarian bagpipes are usually made from goat hide, and don’t look quite as complicated as their Scottish counterparts.

The Cyrillic alphabet – which today is used in Russia and throughout the Balkans and other Slavic nations – was invented by two monks during the First Bulgarian Empire in the 10th century. These two monks/saints (Cyril and Methodius) are celebrated each year in Bulgaria with a feast day/public holiday in May, and also in other Slavic countries around the world.

And I’ll bet you thought the Russians invented this alphabet!

Bulgaria’s history stretches back thousands of years – further back than communism, the Ottomans, and even the Romans. The ancient Roman influence on Bulgaria can still be found in many of the country's cities, though. You’ll find Roman baths in Varna, ruins in Sofia, and a mostly-in-tact Roman theater in Plovdiv (that is still used today for plays and concerts!).

Bulgaria grows a lot of roses. A LOT of roses. In fact, the roses grown in Bulgaria’s “Rose Valley” produce most (70-85%) of the world’s rose oil – a component in most perfumes.

If you want a very “Bulgarian” souvenir to take home, be sure to pick up some rose oil, which can be found for sale just about everywhere.

Believe it or not, Bulgaria is actually a fairly mountainous country. It has two major ranges – the Balkan Mountains and the Rhodope Mountains – and a few smaller ranges, including the Rila and Pirin mountains. Because of all these mountains, Bulgarian towns like Bansko have become very popular for winter sports. 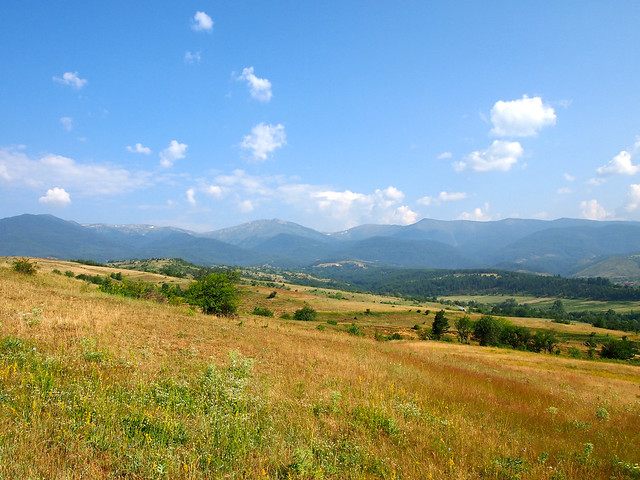 Forget France or Italy – if you want great cheese, head to Bulgaria. There are so many varieties of cheese on offer here, with some of the best being the ubiquitous “white” cheese – usually goat or sheep’s cheese.

Some Bulgarians will actually argue that THEY “invented” feta cheese, and that the Greeks stole it from them. Try a traditional Shopska salad (tomato, cucumber, onion, pepper, and white cheese), and you’ll definitely be reminded of a Greek salad.

On the first day of March each year, Bulgarians exchange red-and-white woven bracelets with one another. They wear these Martenitsi bracelets throughout the month, until they see a stork or a blooming tree. Then, the bracelets are tied to trees as a way of welcoming springtime. This is a holiday of sorts, called Baba Marta (“Grandmother March”), and celebrates the passing of winter.

I was in Bulgaria in July, and there were still Martenitsi tied to tree branches.

And see, I’ll bet you never knew any of this about this Eastern European country!

Who's ready to go to Bulgaria now?

43 Comments on “8 Things You Might Not Know About Bulgaria”