How to Spend 72 Hours in Washington, DC

Home » United States » How to Spend 72 Hours in Washington, DC

As a kid growing up in America, I heard/learned quite a bit about our capital city, Washington, D.C., in school. I know that it sits on the Potomac River and was named after George Washington. I know that it's the home to the U.S. government and that the White House was burned down during the War of 1812.

But I knew very little about the *real* Washington, DC, until I visited as a traveler. Because even though The District is home to a lot of government-y types and even more history, that's not ALL there is to it.

I've now been to Washington DC three times as a tourist. The first time was on a 7th grade trip, which I remember very little of (what can I say? I wasn't a blogger back then!). The second was back in 2013, when my boyfriend and I tried to go and see the cherry blossoms blooming – but the blossoms were late and we missed them. And the most recent trip was last month, when I went to DC to apply for a Russian visa.

I decided to use this most recent trip to come up with a guide to things to do in DC that would include ALL parts of the city, from the historical to the government-y to the cool neighborhoods that make DC so much more interesting.

Trips to my nation's capital usually aren't long for most Americans, so here's my guide for what to do in Washington DC in just 3 days.

Ready to get your tourist on? Because that's what I recommend for your very first day in Washington, D.C.! There's a LOT to see and do here, and some of the best things are actually the things you'll find listed in all the guidebooks.

Washington DC's National Mall is probably the most famous part of the city (well, maybe other than the White House). It's where you'll find all the famous monuments and museums, stretching from the Lincoln Memorial to the US Capitol building. (Well, actually the second half of the area, between the Washington Monument and Capitol building, is the “official” National Mall, but most people consider it to include everything up to the Lincoln Memorial, too.)

And, fun fact, it's managed by the National Park Service!

Must-see memorials and monuments include:

All of the memorials are outdoors and free to visit, but be sure to wear good walking shoes – the Mall is huge!

You can't go to Washington, DC, and not get a glimpse of the famous White House! You can take a slight detour to see it as you make your way down the National Mall, as it's near the Washington Monument (across the Ellipse).

3. Stroll around the Tidal Basin

You'll find the Martin Luther King, Jr. Memorial on one side of the basin, and the Jefferson Memorial on the other side. Both are worth seeing up close!

4. Walk to the Capitol

While the National Mall doesn't “officially” stretch to all the memorials or the US Capitol building, it's natural to walk there since it's kind of the second bookend to the Lincoln Memorial.

The US Capitol building is a pretty impressive sight, and nearby Union Station and the Library of Congress are also well worth a visit if you enjoy architecture.

Don't put those walking shoes away just yet, because there's still a lot more walking to do today.

Washington, DC, is known for its Smithsonian Museums. If you walked the National Mall on Day One, you likely saw most of these since they're all located between the Washington Monument and Capitol building. Today is the day to visit one or two of them.

And the best part? ALL of the Smithsonian museums are 100% free to visit.

Other visit-worthy museums in downtown DC include:

You could (and probably should!) spend an entire day museum-hopping in DC. There's SO much to see. (And this is an especially great option if you run into bad weather.)

Want to see DC with a guide? Here are a few guided Washington, DC, tours to check out:

Tired of the touristy sights yet? If so, you'll probably enjoy Day Three, which is going to get you away from downtown and the National Mall and into some of DC's coolest neighborhoods.

Washington, DC, isn't known for its neighborhoods in the way that, say, New York or San Francisco is. But, just like those other cities, DC does, indeed, have a lot of cool neighborhoods that are worth exploring. My favorites (so far; I haven't even been to half of them yet!) include:

Georgetown is a historic neighborhood located on the banks of the Potomac River. It's so historical, in fact, that it predates Washington, DC, itself, having been founding in 1751 in what was then Maryland. This means you'll find lots of beautiful old buildings, leafy streets, and even an old canal (the Chesapeake and Ohio Canal) in Georgetown.

If you're going to spend a day wandering around a DC neighborhood, I would highly recommend Georgetown. Not only is it very pretty, but there are also lots of cute boutiques and restaurants to visit, too. And plenty of colorful doors to photograph.

(If you want to visit an even OLDER neighborhood, head to Alexandria's historic Old Town in Virginia, which you can reach using DC's Metro system.)

Adams Morgan is most famous for its nightlife, but the diverse and funky neighborhood has so much more to offer!

I stayed here with a friend during part of my most recent DC trip, and enjoyed wandering down colorful 18th street, and especially loved how many choices there were when it comes to restaurants. You literally can find everything from Ethiopian to Italian to vegan BBQ (I swear it's a thing!) to Nepalese here.

If you have one more day…

Staying in Washington, DC, for four or five days? Some other things to do in DC you might want to check out include:

Check out these tours that would be perfect as day trips:

Where to stay in DC

You'll find all the usual hotel chains in DC, but if you're looking for something with a little more character away from all the tourist hot spots, check out The Normandy Hotel. The Normandy is a boutique hotel located on a quiet leafy street just off Connecticut Avenue near Dupont Circle and Embassy Row.

The rooms are comfortable (and have seriously awesome wall paper), and the staff is top-notch. I felt more than welcome during my stay, and loved being within walking distance of some cool neighborhoods.

The Normandy isn't next to the National Mall or anything like that, but it's close to both Dupont Circle (which has a metro stop) and Adams Morgan. Staying here gave me a different feel of DC, which I really loved.

(Read TripAdvisor reviews | Book a room at The Normandy on Booking.com)

Other hotels worth checking out in DC include:

Or, you can compare other hotels in DC here.

How to get around DC

The great thing about visiting Washington, DC, is that you don't really *need* a car in order to get around. There are plenty of options for getting around the city, which include:

Do you have any other favorite things to do in Washington DC?

*Note: I was a guest of The Normandy hotel for two nights during my stay in DC. However, you guys know I never recommend things to you guys unless I actually like them! 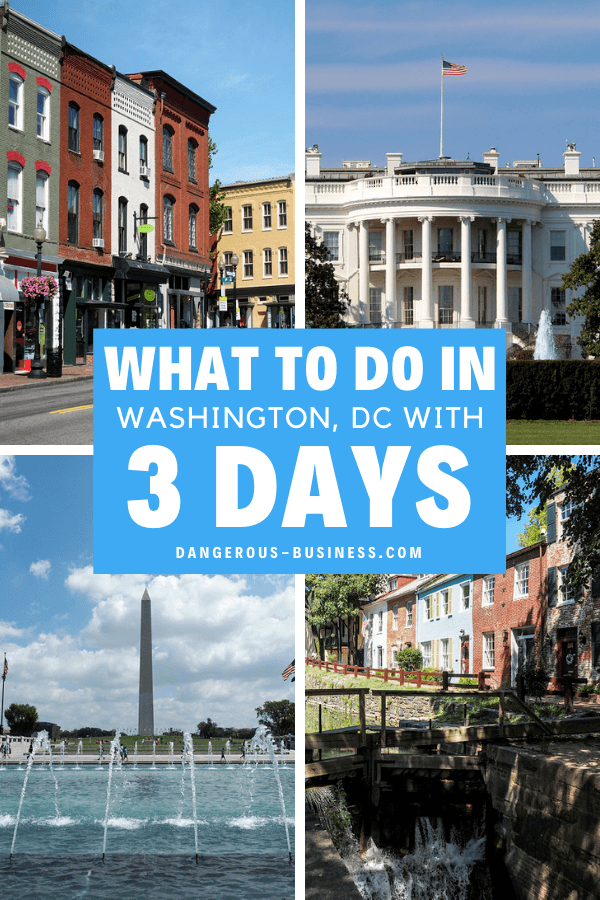