7 Epic Adventures to Have in North Wales

Home » Europe » Wales » 7 Epic Adventures to Have in North Wales

I know, I know. You're reading this post title and saying to yourself, “Adventure? … in… Wales??” But I assure you that the two do, in fact, fit together well.

You see, 2016 has been the “Year of Adventure” in Wales (and they took it seriously, too, even enlisting Bear Grylls as an “Official Adventure Ambassador”). They focused on everything from adrenaline-heavy adventure to culinary and literary adventures, highlighting all sorts of cool things you probably had no idea could be found in Wales (surfing! street food! Roald Dahl!). 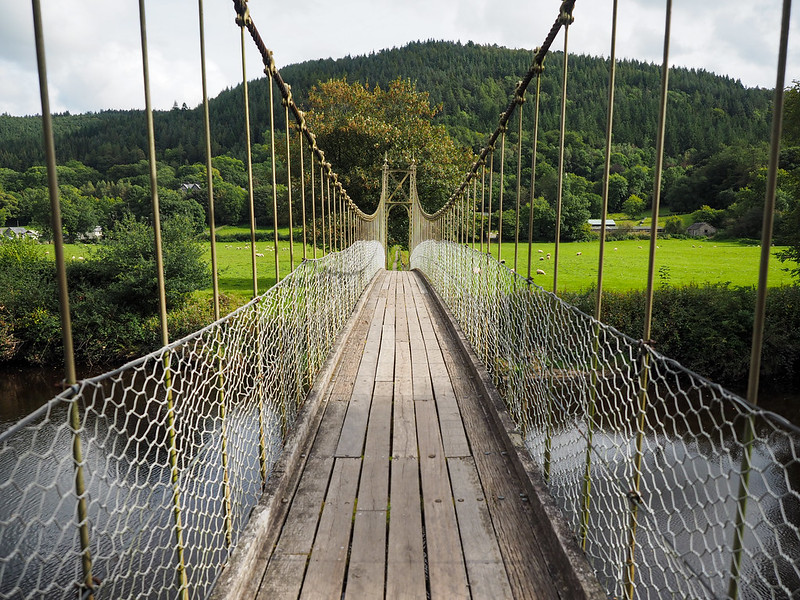 And, on a recent trip to North Wales with Visit Britain and Visit Wales, I got a first-hand taste of all the adrenaline-fueled adventure that you can enjoy in North Wales.

Here are seven of the most exciting, heart-pumping activities that you can try in Wales.

7 Epic Adventures to Have in North Wales

North Wales reminded me of New Zealand in a lot of ways: the rolling green hills, the sheep, and all the adventure activities located within such a small area. I think I'm just going to start calling Wales the NZ of the North.

Here's a sample of the sorts of thing the adventure-lover can try in Wales: 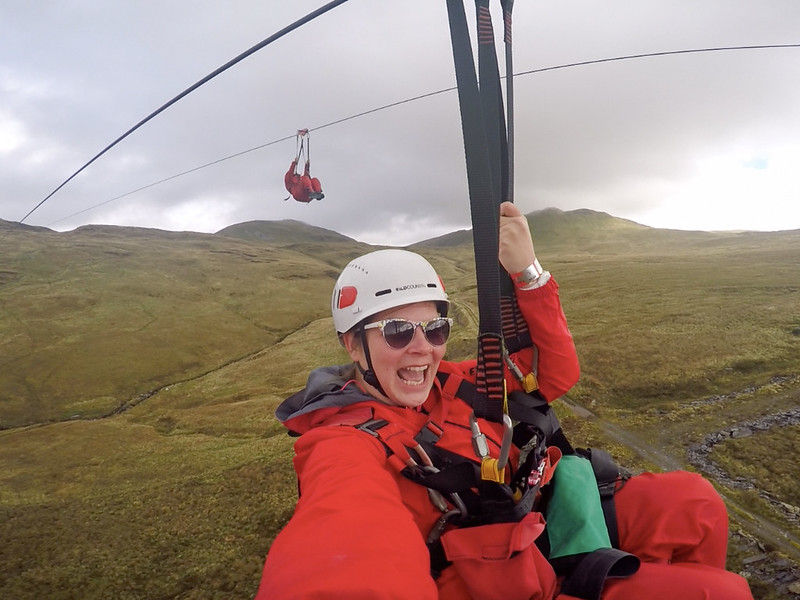 One of my favorite adventures was zip lining at Zip World Titan in Blaenau Ffestiniog (yeah, try to say that one… well, at all). Here they have the first 4-person zip line in Europe, and it was the first “group zipping” experience I've ever had. The Titan consists of 3 different zips, and four people go all at once. Not only is the four-at-once aspect really cool, but the zip lines are also erected above an old slate quarry, which makes for some interesting scenery, too.

The three zips (Alpha, Bravo, and Charlie) are all different, and if you scan your wristband at the beginning and end of the last two zips, you can nab a cool video of the whole experience.

The UK probably isn't the first place you think of when you think white water rafting, but Wales has its very own National White Water Centre! Located on the River Tryweryn in Snowdonia National Park, the Centre offers something that most others can't: fairly reliable river conditions. This is because the Tryweryn is dam-controlled, meaning they pretty much know how it will be running at all times.

I did a “Rafting Taster Session” which includes two runs down the upper part of the river, where it's pretty much class 3-4 rapids the entire time. This is a great intro to white water rafting – it's not too long, but LOTS of fun.

If water activities are your thing, then you'll also want to look into the RIB Ride in Anglesey (the “RIB” stands for Rigid Inflatable Boat). This jet boat ride is a great way to see more of the coast in northern Wales, and they offer a few different tours based on your interests (castles, wildlife, bidges, etc.).

Sadly my own RIB Ride had to be skipped because of bad weather, but it's definitely going on my next-time list! 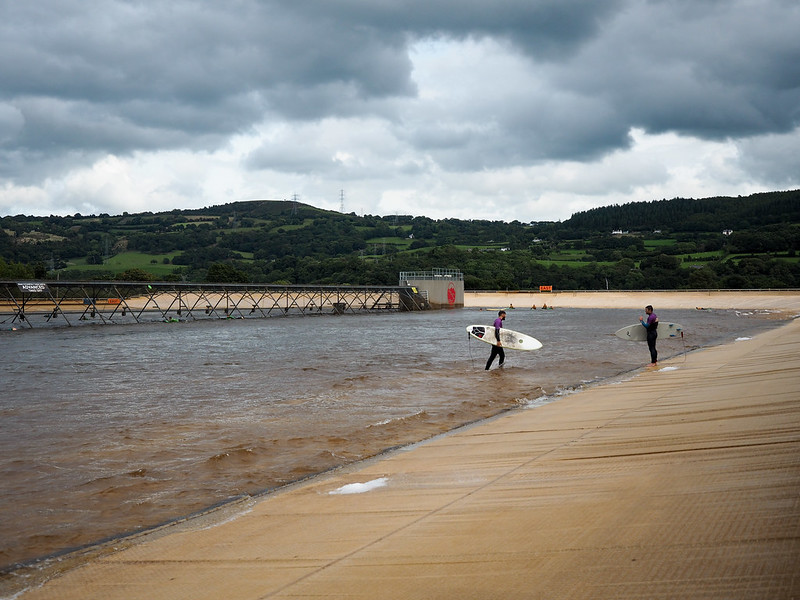 Surfing in Wales? Well by now you probably shouldn't be surprised. I discovered something about the adventurous people in Wales during my trip: they really like reliable conditions! Which is why someone came up with the idea for Surf Snowdonia, a man-made surf center near Conwy, Wales, that produces a uniform, artificial wave in a lagoon every few minutes.

The “Wave Garden” has different sections for different surfing abilities, and it's perhaps not surprising that I spent all my time at the beginner's end of the wave with my fellow newbies. It's a really cool idea, but if you've ever been on a surf lesson in the ocean before it's probably going to feel weird trying to compete for the same wave with a handful of other people – there were definitely plenty of on-wave crashes during our session! 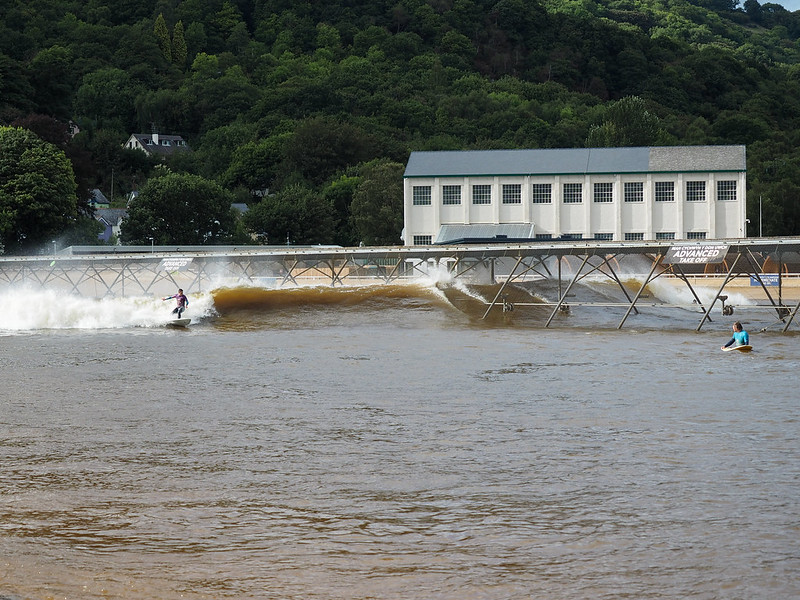 I was supposed to try the Welsh adventure activity known as “coasteering” while in Wales. But a bad storm caused a dangerous swell, and our coasteering trip had to be canceled. But I have to include it here because it's the most unique adventure activity you can try in Wales!

Describing coasteering isn't easy, so I'll use this description from Visit Wales: “it is a blend of rock-hopping, shore-scrambling, swell-riding, cave-exploring and cliff-jumping.” Basically you walk along the coast until you come upon something cool, and then you jump into the sea. Sounds weird, I know, but check out this post and video from my friends at The Planet D to get a taste for what it's really like. 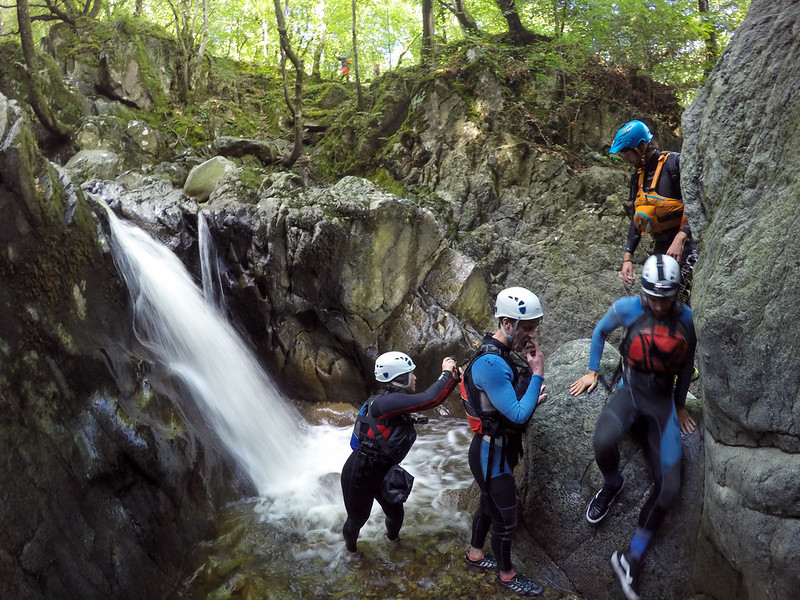 Instead of coasteering, we ended up going gorge hiking with Surf Lines near Betws y Coed. Gorge hiking is kind of like canyoning, except different. For our group (of mostly beginners), we were taken into the forest and spent a couple of hours scrambling up waterfalls in a freezing cold river. It might not sound like much fun, but it WAS.

Even though I was bummed about missing out on coasteering, I had a really good time doing this, too (even if my toes were frozen by the end). 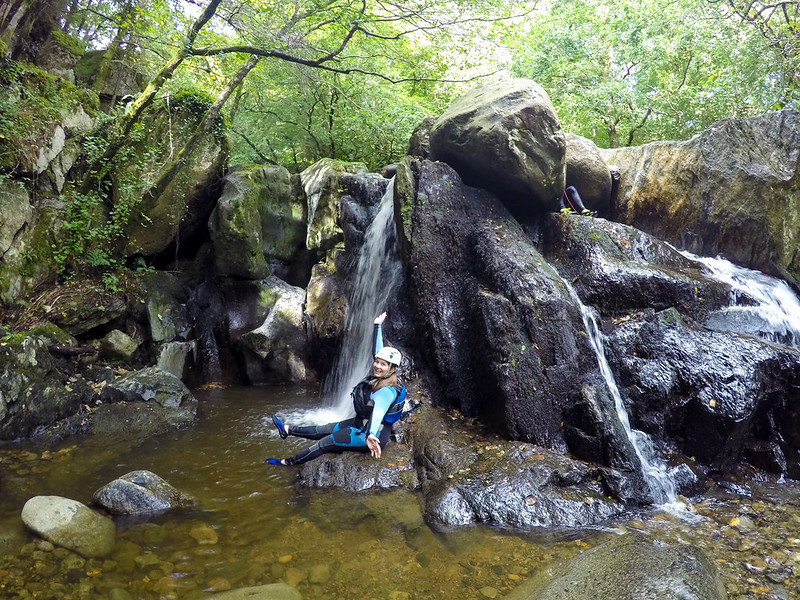 You'll find this activity labeled as everything from gorge hiking to gorge walking to gorge scrambling (which is probably the most accurate description). It is not, however, called “gorgeering,” no matter how much we wanted it to be. 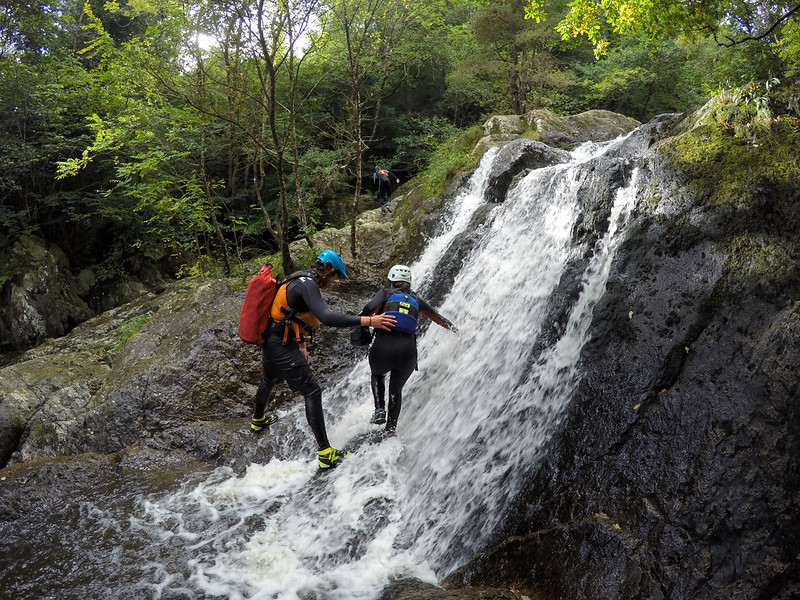 Don't like being wet? Then maybe mountain biking will be more your speed. Wales is home to the UK's first dedicated mountain bike trail centre in the Coed y Brenin National Forest, which has an excellent network of single track trails through some beautiful forests within Snowdonia National Park. Its trails are popular with both locals and visitors, and those new to mountain biking can take lessons, too, to learn about everything from biking basics to trail working. 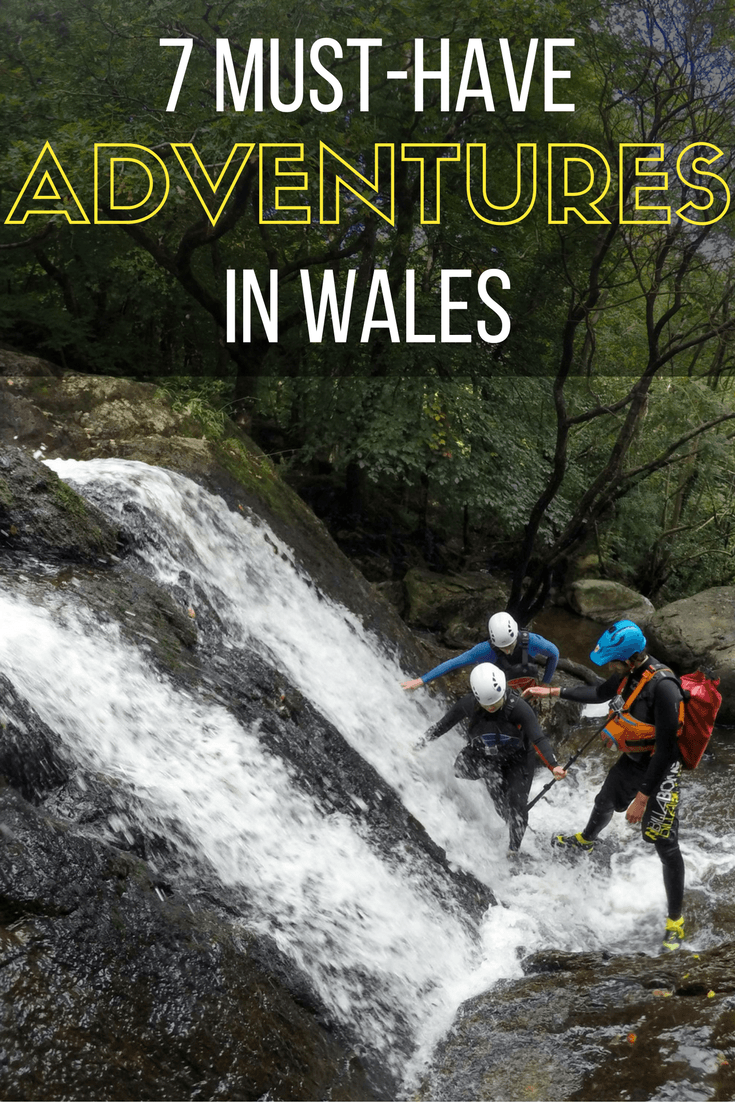 And the adventure doesn't end here!

Those who crave even MORE have options like survival courses (including some endorsed by Bear Grylls), long hikes (including the Wales Coast Path, which stretched for 870 miles), jumping on trampolines in underground caverns (at Bounce Below at Zip World), or climbing Mount Snowdon (Wales' highest peak).

For such a small corner of the world, there certainly isn't a lack of cool things to do in North Wales!

Which adventure would YOU most like to try in Wales?

Note: I was a guest of Visit Wales and Visit Britain on this trip, but all opinions and weird selfie faces are 100% my own.

30 Comments on “7 Epic Adventures to Have in North Wales”