Walking the Walls of Dubrovnik

When I first discovered that my Busabout trip would only be briefly passing through the Croatian city of Dubrovnik, I was a bit bummed. We would only have about 4 hours to explore this “Pearl of the Adriatic,” and it didn't seem like enough.

But then I realized a couple of things: first, that Dubrovnik in the summer is incredibly hot, expensive, and teeming with tourists, and perhaps I didn't WANT to spend a lot of time there. Secondly, that 4 hours was plenty of time to do the only thing I really wanted to do in the city: walk its famous walls. 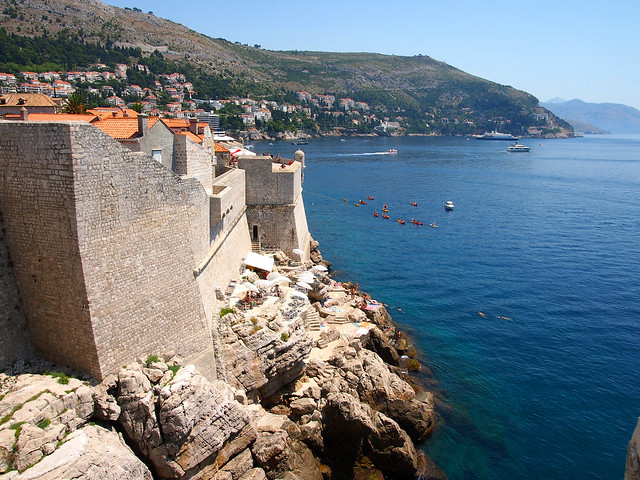 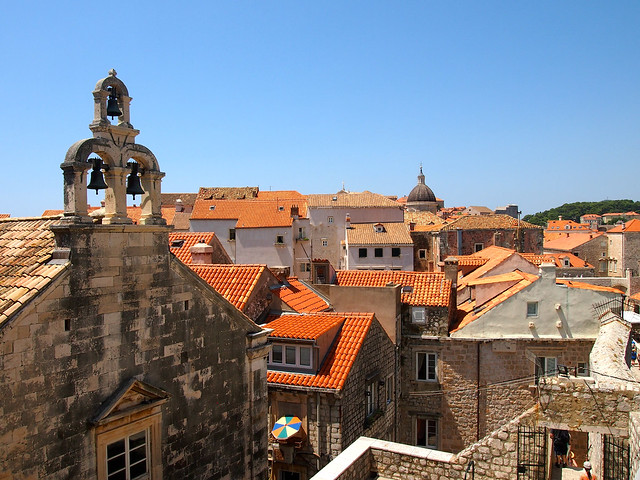 The Walls of Dubrovnik

Whenever I think of Dubrovnik, I think of the thick stone walls the encircle the city's Old Town — walls that went centuries without being breached by a hostile army; walls that helped Dubrovnik earn a UNESCO World Heritage Site designation in 1979.

Walking atop these walls was the only thing on my agenda. 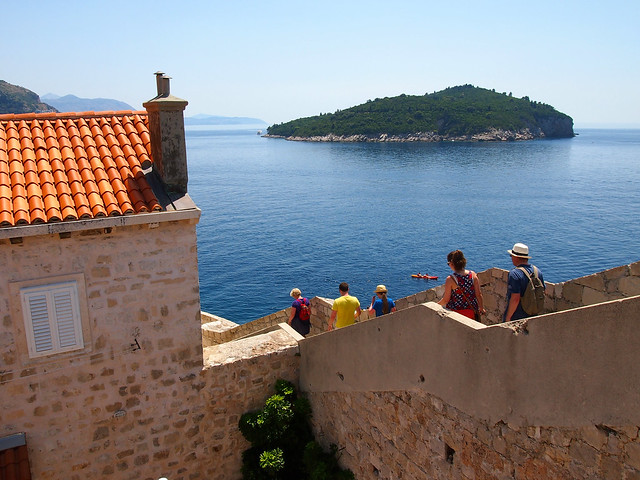 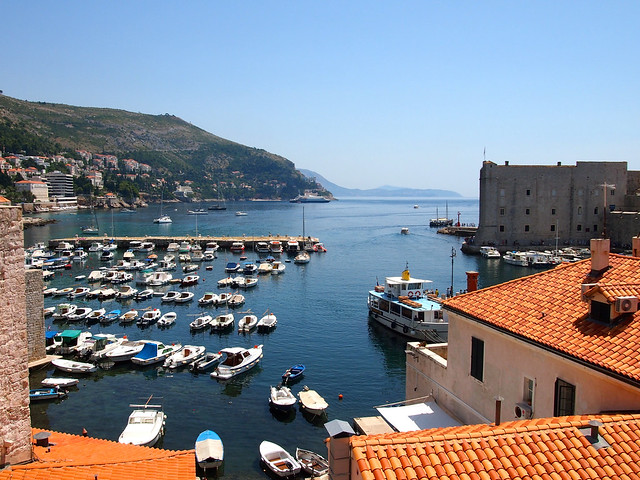 When we arrived in Dubrovnik in the early afternoon (at the hottest time of day, of course), I made a beeline for the walls. I convinced one other person to join me in the midday sun, and off we went, up, up, up to the top of the walls.

I visited Dubrovnik before “Game of Thrones” mania took over the city (Dubrovnik stood in for King's Landing in several seasons of GOT), and entrance to the Walls back then was 70 Kuna. Today, it'll cost you 150 Kuna for the privilege of walking the Walls (roughly $24 USD).

Perhaps because it was so warm, the walls weren't actually as crowded as I'd feared, and the clear skies meant that it was perfect photo-taking weather.

Walking the walls of Dubrovnik

We began our adventure at a far corner of the walls, meaning we had to walk through Dubrovnik's Old Town first. Its beautiful, detailed Old Town. 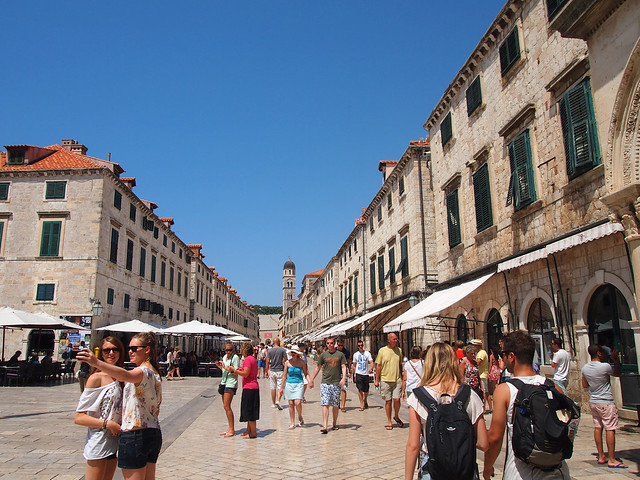 Then it was time to climb up to the walls — about 80 feet up. 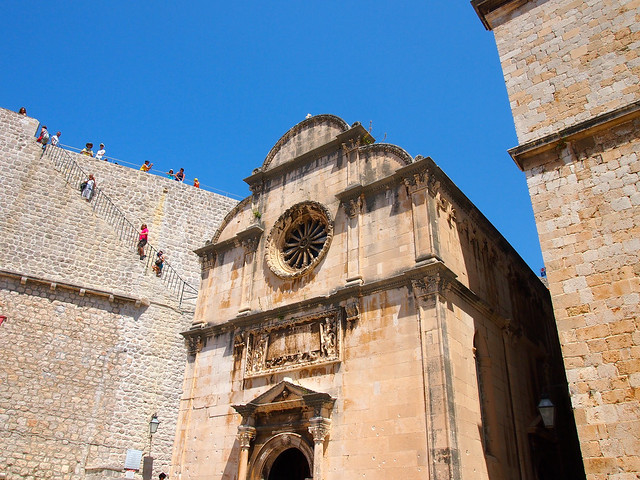 From atop the walls, you get an amazing view out over the Old Town, including those iconic orange roofs that the city is so well-known for. 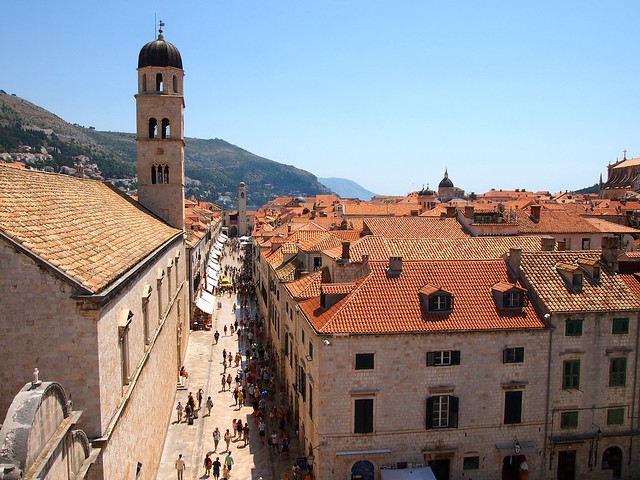 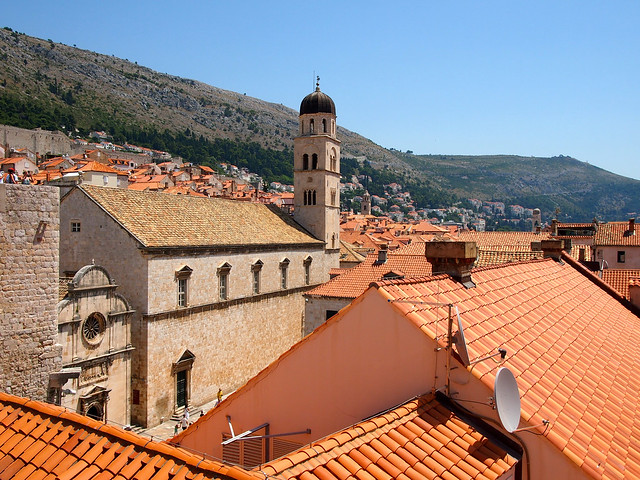 While Dubrovnik went centuries without a war breaching its thick walls, the city was severely bombed during the Balkan Wars in the 1990s. Today, though, you would never know it — except by looking at the city's rooftops. Bright orange roof tiles indicate roofs that were restored after the bombings. 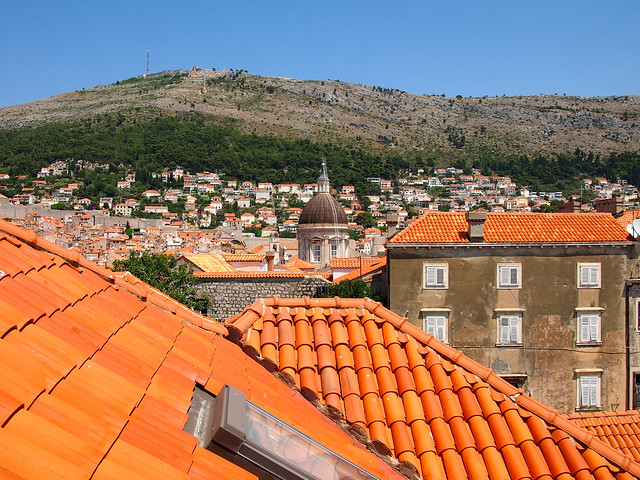 You also get an amazing view out over the impossibly blue Adriatic. 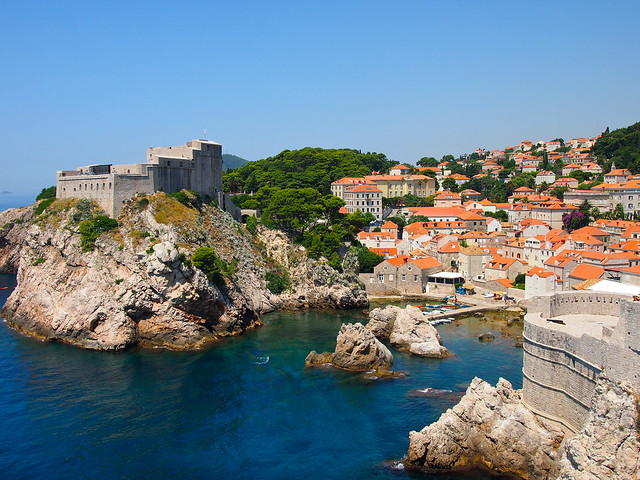 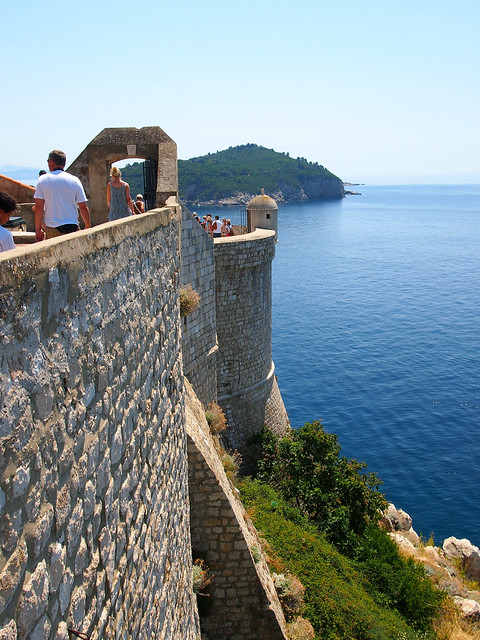 The walls allow you a bird's-eye view down into the canyon-like streets of Dubrovnik. 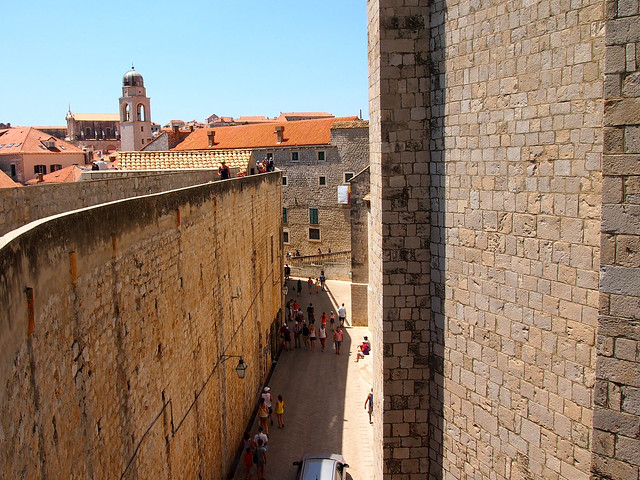 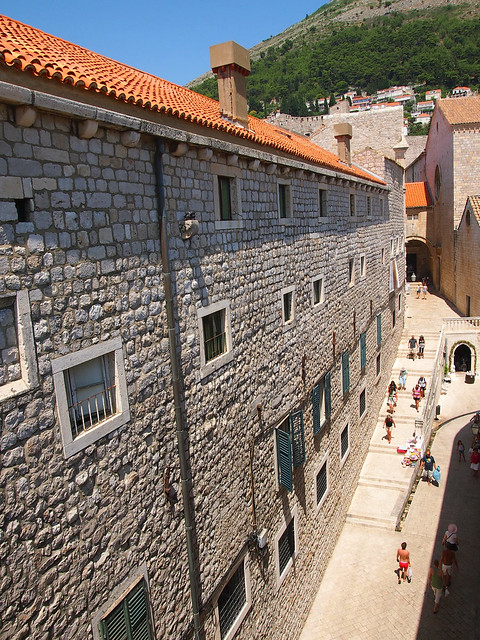 From the walls, you can also look down on Dubrovnik's colorful harbor. 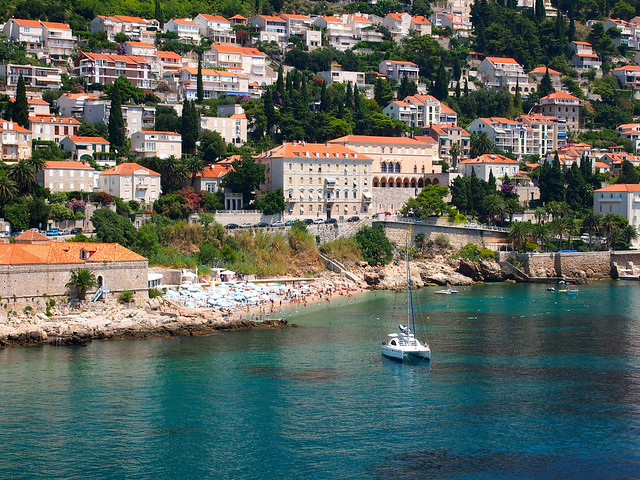 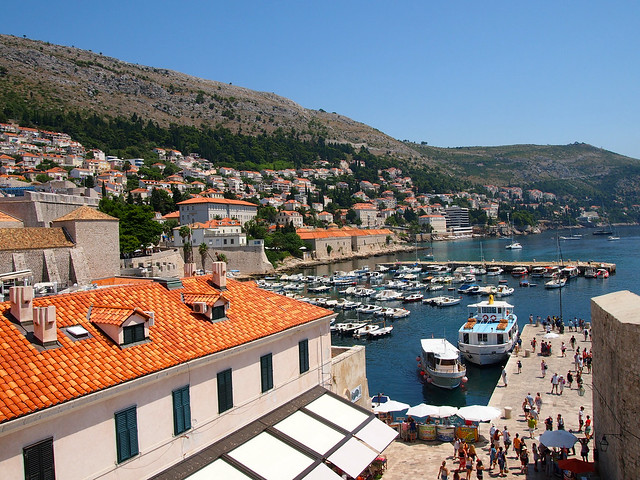 You get to see the old, right alongside the new — all of it blending perfectly. 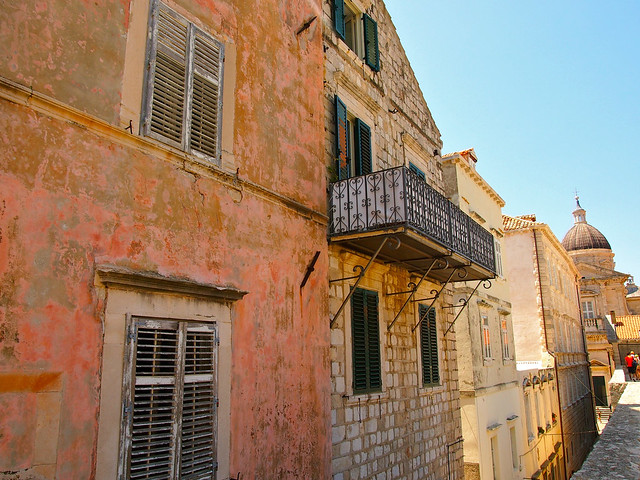 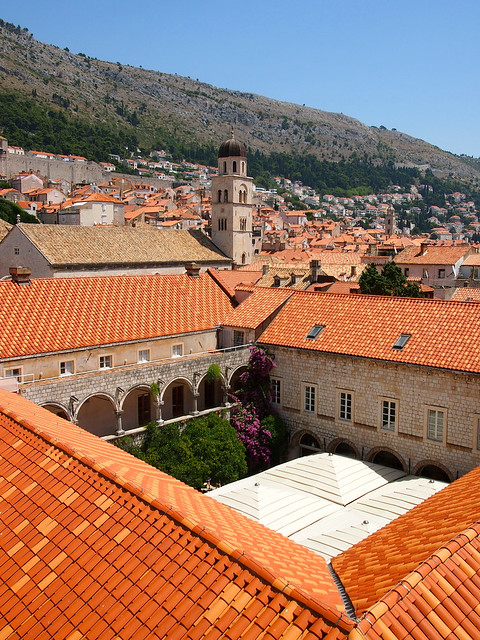 In the end, 4 hours was the perfect amount of time to spend in Dubrovnik on a hot summer day — walking the walls can take up to 2 hours (especially if you stop for as many photos as I did), and then you can spend the rest of the time wandering around in the Old Town, possibly in search of ice cream.

No matter how much time you have to spend here, though, walking the Walls of Dubrovnik MUST be on your list!

Going to Dubrovnik as a Game of Thrones fan? Check out these tours:

Which view would you most like to see from Dubrovnik's walls?

*Note: I visited Dubrovnik as part of a discounted 9-day Classic Balkan Trek tour with Busabout. All opinions, however, are my own.

62 Comments on “Walking the Walls of Dubrovnik”