Walking the Paths of the Dead in New Zealand

“The way is shut. It was made by those who are dead, and the Dead keep it…”

It was actually the “Lord of the Rings” film trilogy that inspired me to go to New Zealand for the first time. The gorgeous, eerie and plain amazing landscapes used in the films made me drool. And when I realized it was all filmed in one little country in the South Pacific… well I knew I had to get there. I had to visit Middle-Earth.

My first trip to New Zealand had me visiting places like Hobbiton, Edoras and Mordor – all the memorable spots used to film “Lord of the Rings” that could be recognized without elaborate sets or costumed characters.

But, the second time I was in New Zealand, I ended up stumbling upon filming locations that I didn't even know about completely by accident. 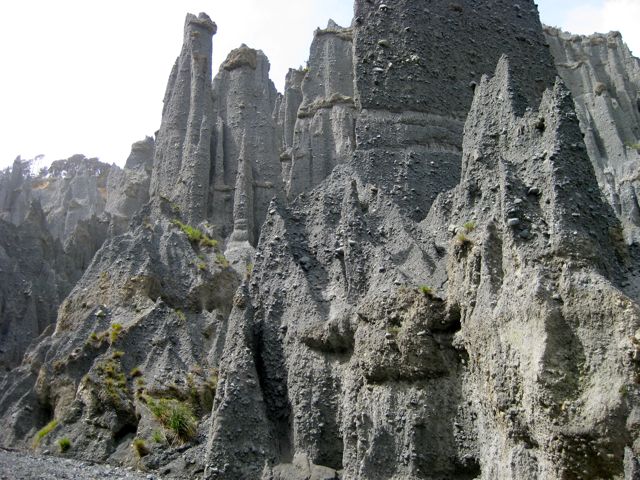 It was the day after my birthday, and fellow study abroad students Jamie, Andrea and I had just spent a day climbing cliffs and eating mouthfuls of wind-whipped sand at Castlepoint. We'd stayed the night in the Wairarapa wine country, and decided to head further south for our second day of adventure.

Our destination? The Putangirua Pinnacles. 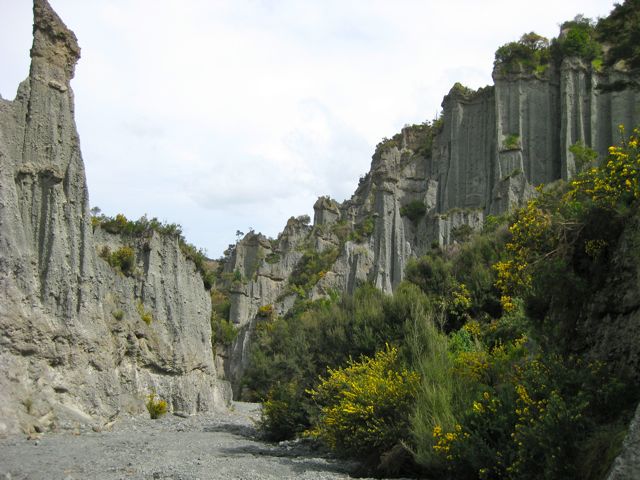 The Pinnacles, located southeast of Lake Ferry in the Putangirua Pinnacles Scenic Reserve, are an example of “badlands erosion,” meaning that all the softer rock in an area has been eroded away, leaving the harder rock behind to stand in odd, interesting formations.

In this particular case, the rock has formed into pillars, also called “hoodoos.” (And if that’s not a fun word, I don't know what is.)

It just so happens that this area was used to film a few scenes in “Lord of the Rings.” The Putangirua Pinnacles area doubled as the Dimholt Road in “Return of the King.” The characters Aragorn, Legolas and Gimli took this road on their way to the Paths of the Dead, which was a passage under a mountain where the souls of traitors and defectors were trapped. In the movie, both the Dimholt Road and Paths of the Dead were eerily quiet, shadowy and creepy – and also filled with ghosts.

After visiting the Putangirua Pinnacles, I can understand exactly why this site was used for these scenes. 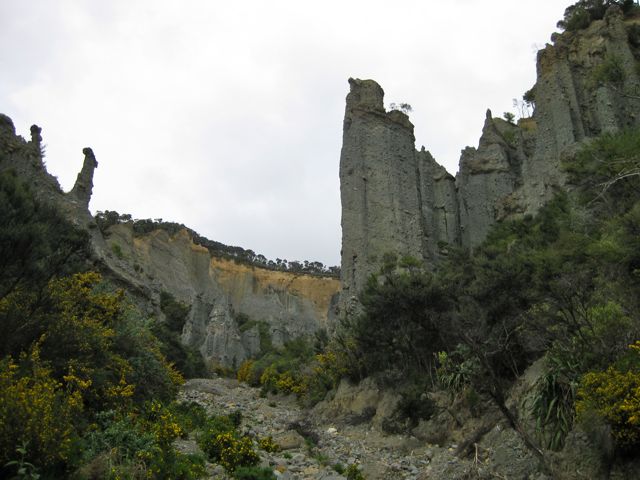 Walking the Paths of the Dead

The day I visited the hoodoos with my friends Jamie and Andrea was grey and chilly. A few raindrops dotted our windshield as we pulled into the car park, and a cold wind buffeted us from the coast at our backs. We started off straight away into the scenic reserve, hiking for about 15 minutes through a dry riverbed, over big, smooth rocks and patches of fine, cream-colored sand.

The sides of the valley that the riverbed sat in eventually began to grow, turning to grey, crumbly-looking rock  that opened up into thin fissures now and then – our first hoodoos. 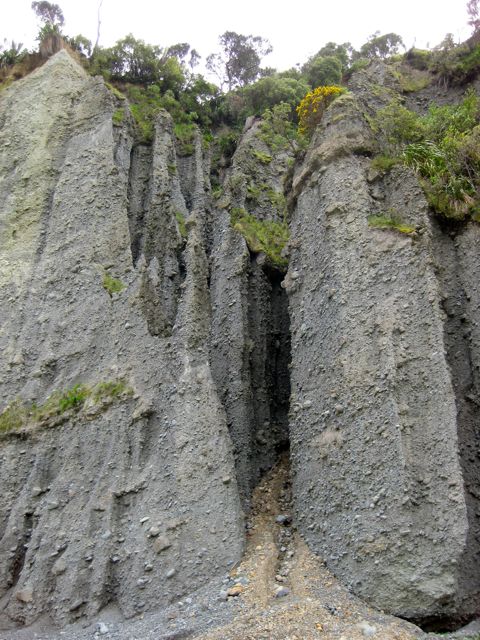 We scrambled up into one of the fissures, trying not to send any boulders tumbling. It was like being on the moon. 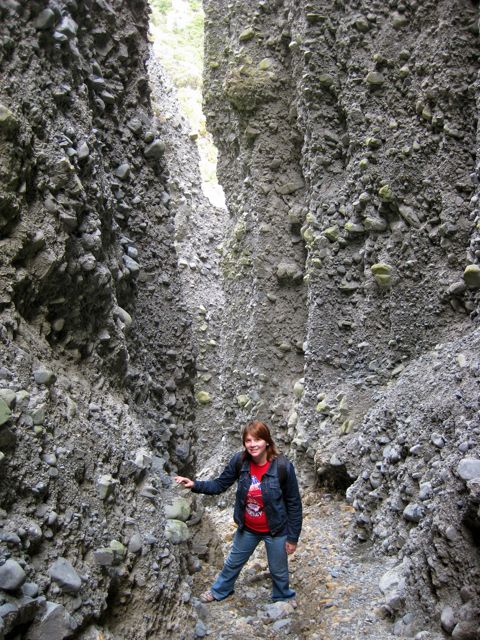 Jamie and Andrea, braver than I was, climbed up dozens of feet, while I headed across the riverbed to another group of hoodoos, these ones slightly larger and cooler looking.

These were still not the pinnacles I remembered from “Lord of the Rings,” however. We still had some climbing to do. 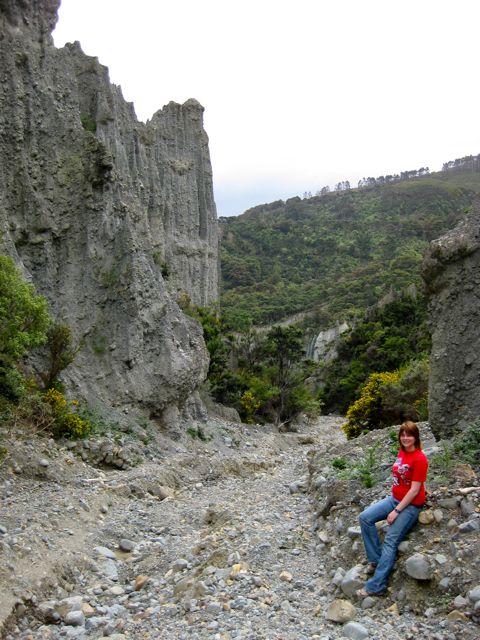 The trek through the uneven riverbed was steep at times, and slow-going. Jamie and Andrea – both prone to silliness and not huge LOTR fans – kept an eye out for “walking sticks,” finding the most useless ones possible. 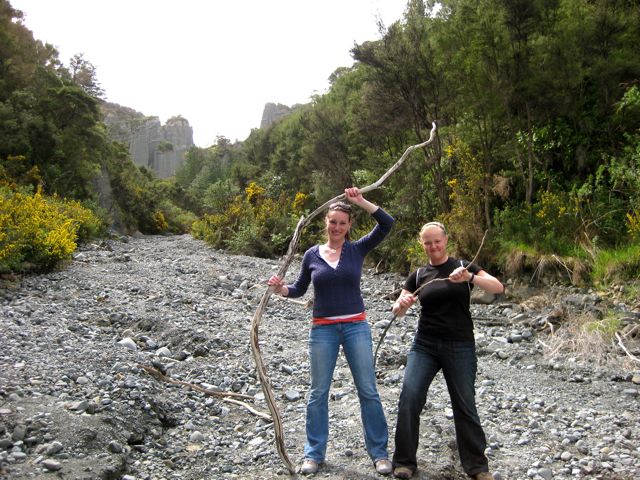 Our hysterical laughter over these useless “walking sticks” echoed weirdly in the quiet valley.

The further into the scenic reserve we went, the taller and more imposing the hoodoos became. They reached up hundreds of feet into the grey sky, like weird skeletal fingers. This was what I had been waiting for; this was the spooky scenery straight out of “Lord of the Rings.” 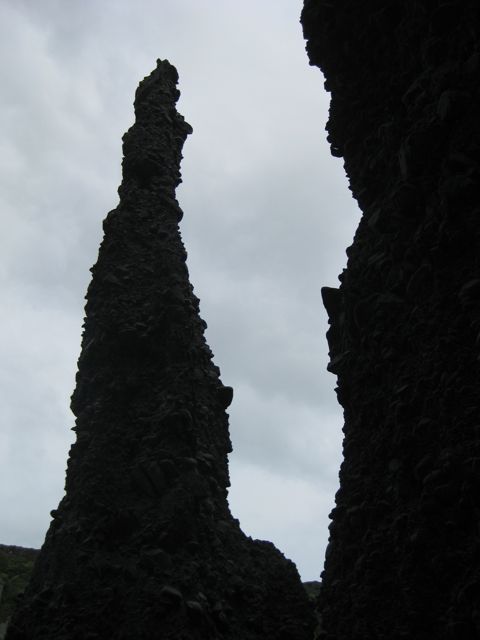 The further into the pinnacles we went, the thicker the silence grew. The wind died down, and soon we were only talking in whispers. The only sound besides our footsteps was the clattering of small pebbles every time a light breeze worked its way up into the valley.

It wasn't difficult to imagine Tolkien's Army of the Dead sweeping out of the dusty shadows here. After walking around for a bit in near silence, we decided to head back. The hike deep into the pinnacles had taken over an hour, and the rain clouds overhead had begun to look more and more imposing the further we'd climbed.

We walked back down through the riverbed, the yellow flowers of the prickly gorse bushes standing out starkly to us after having been up in the towering grey pinnacles for so long. 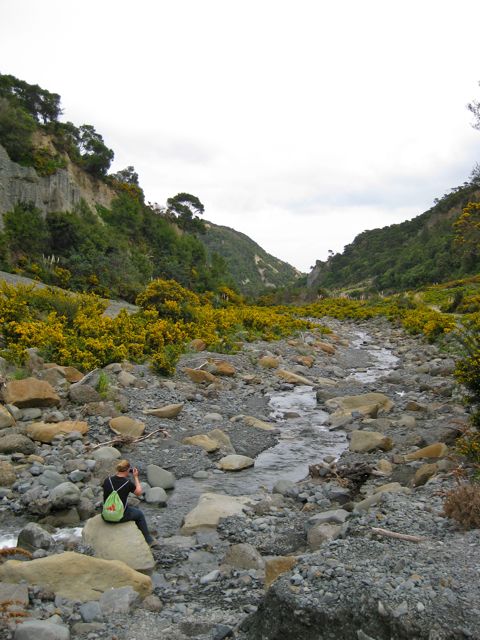 Jamie stopped to take a drink out of the “river,” which, that day, was nothing more than a trickling stream. Andrea was mortified, convinced that Jamie was going to die from a bacterial infection. I had a hunch that the water she was drinking was probably cleaner than anything that’s ever come out of any tap or water bottle, however. 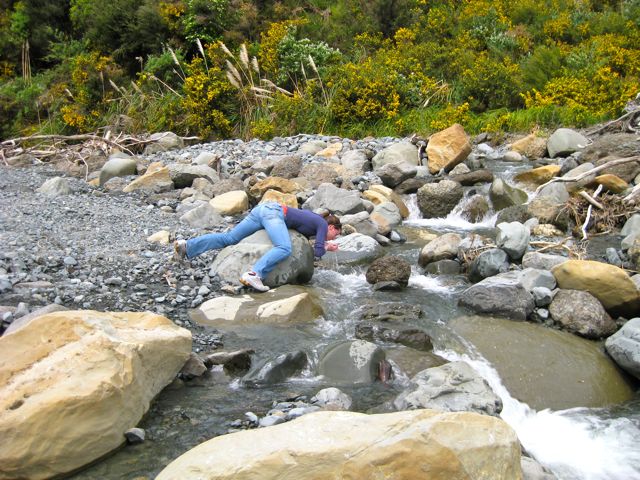 The clouds opened up just as we reached the car park, and it was a mad dash to get to our rental car before we were soaked. Once inside, we congratulated ourselves on good timing, and for choosing yet another off-the-beaten-path destination that did not disappoint.

Because, even if you have no clue what the Dimholt Road and Paths of the Dead are, the Putangirua Pinnacles are still well worth a visit. 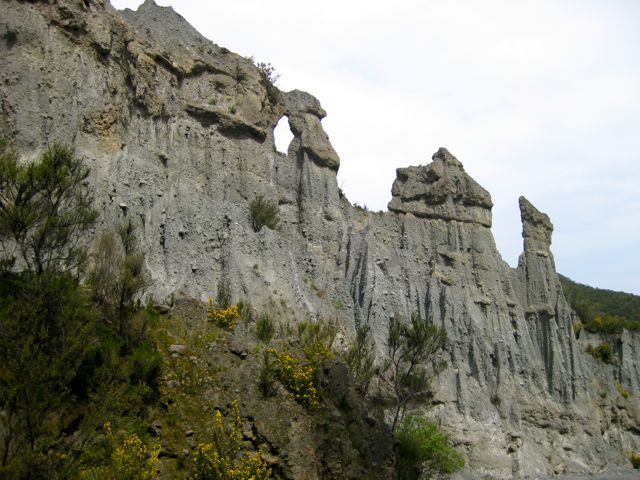 Interested in visiting the Putangirua Pinnacles yourself? Here's some practical advice:

Where are they? The Putangirua Pinnacles are found in a scenic reserve about an hour's drive from Martinborough on New Zealand's North Island.

How do I get there? To find the Putangirua Pinnacles Scenic Reserve, drive about 13 kilometers along Cape Palliser Road from the Lake Ferry turn-off.

How long do I need? I recommend at least 3 hours total to hike up into the pinnacles and back to the car park. Longer if you want to re-enact any Lord of the Rings scenes.

Would you want to walk the Paths of the Dead?