For a place that is filled with so much life, the Okavango Delta was surprisingly quiet as we traversed through its maze-like waterways in narrow mokoro boats.

The loudest sound, in fact, was the poles dipping in and out of the water, dripping arrhythmically as the polers propelled the mokoros through reeds and lily pads. Even the mosquitos (of which there were many) were oddly quiet in their buzzing.

And yet I knew that life was vibrating all around me. 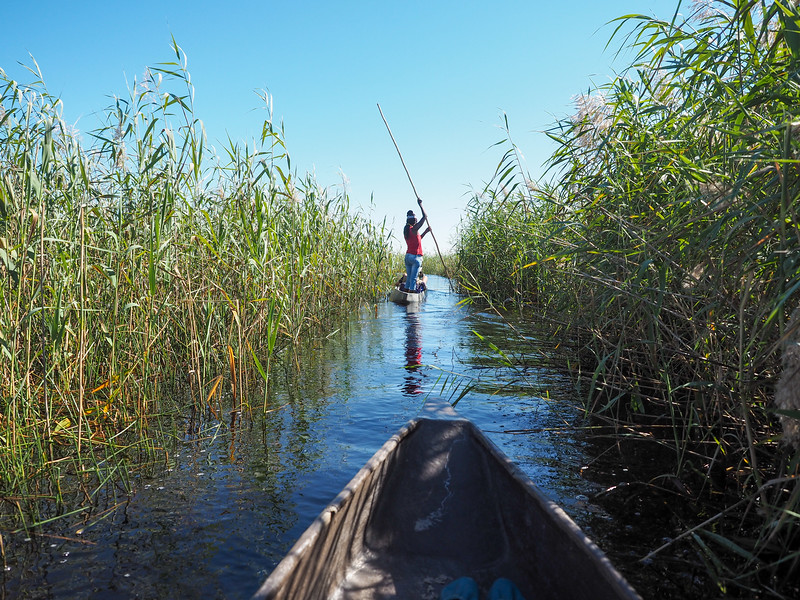 The Okavango Delta is an incredibly unique ecosystem in northern Botswana. For half the year, the large inland delta is merely marshy. But, when the Okavango River begins flooding its banks between March and June each year, the waters spread into the uber-dry Kalahari Desert, transforming it into a watery wonderland.

Because of this, the Delta is teeming with life – everything from rhinos to elephants to hippos to cheetahs call this corner of Botswana home. And it is now (not surprisingly) one of the most popular places for tourists to visit in this part of Africa.

The Okavango Delta by Boat

After an hour-long bumpy drive from Maun, the hub for most Delta tours, we arrived at the polers station where we would meet our guides, clamber into mokoros, and head off for a night in the heart of the Okavango Delta.

Mokoro boats are long, narrow canoes traditionally made from dug-out tree trunks that have been used for ages in the Delta for fishing and transporting goods. And, these days, they also transport tourists. 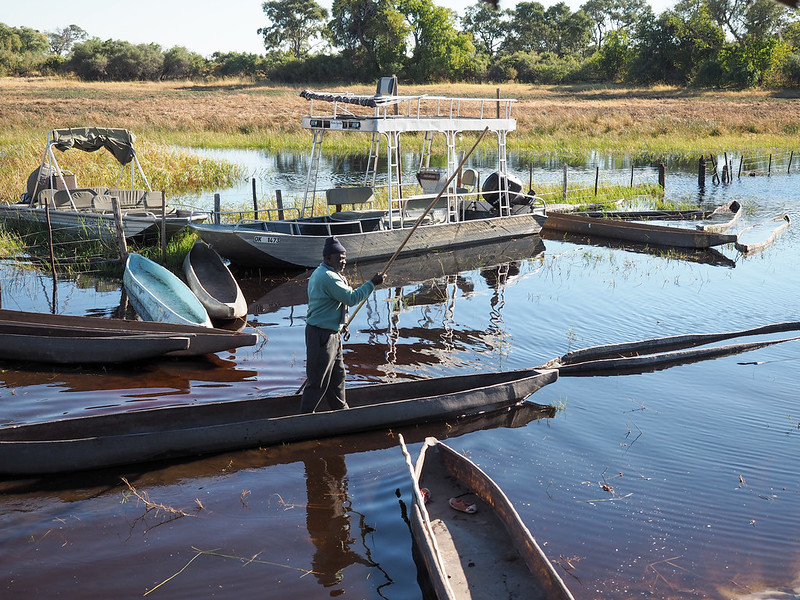 I was sharing a mokoro with Khumbu, the driver from my Acacia Africa overland trip, and after meeting our poler, Kate, we gingerly climbed into a mokoro. The mokoros used for Delta safaris aren't usually made from real trees anymore – ours was made from a more durable fibre-glass – but the polers still propel them in the traditional way: by standing at the back and using a long ngashi to push the boat through the shallow channels. 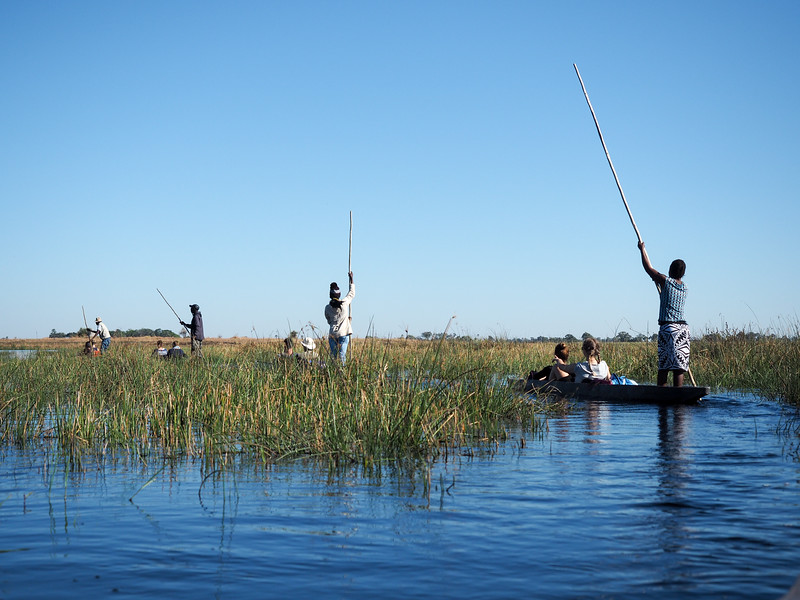 Our mokoro journey took more than an hour and a half. We slipped through channels lined with tall plants, glided over patches of lily pads, and stopped once or twice to see antelope bounding across the Delta's islands. 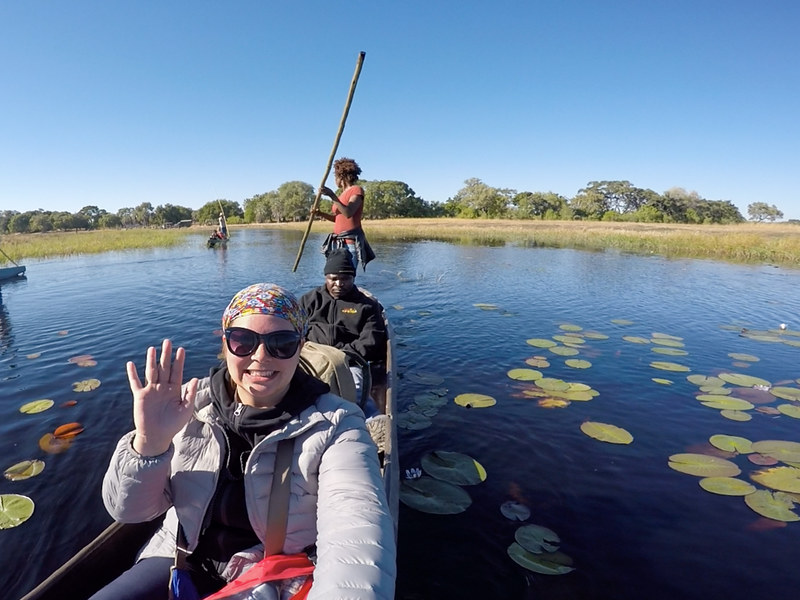 Even though the group I was with consisted of a dozen people in six different mokoros, it was a mostly silent journey. There was something about being in the middle of such a vast and wild place that made me feel like anything above a whisper would break the invisible spell of the Delta. 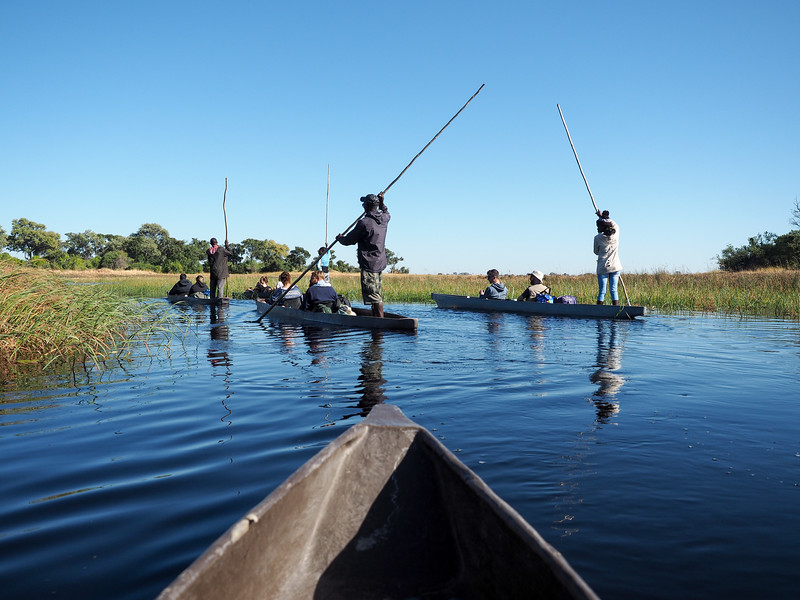 The Okavango Delta on Foot

“Do NOT leave the camp alone,” we were told at least three times upon arriving at our mobile tented camp for the night. “Especially after dark.”

The camp was luxurious by bush camping standards, with large tents and cots with real blankets, but was lacking electricity and running water. And unlike the camps we had been staying in on our overland trip up until this point, this mobile Delta camp had no fences. Meaning there was nothing except our odd human noises to keep away animals like elephants and lions and hippos.

When we eventually did venture out of the camp on foot after lunch, it was with a local guide. As we trekked out into an un-flooded part of the Delta, tall grasses brushing against my legs, I couldn't help continually looking over my shoulder, contemplating what could be out there.

Our bush walk had us following game trails, visiting a giant baobab tree, and getting up close to a herd of zebra. We also saw a herd of wildebeest gallop out of the grasses less than 100 yards away from us, which was breathtaking and exciting.

We returned to our camp at dusk to watch the waters of the Delta turn from blue to orange and listen to the wildlife sounds shift from day to night. 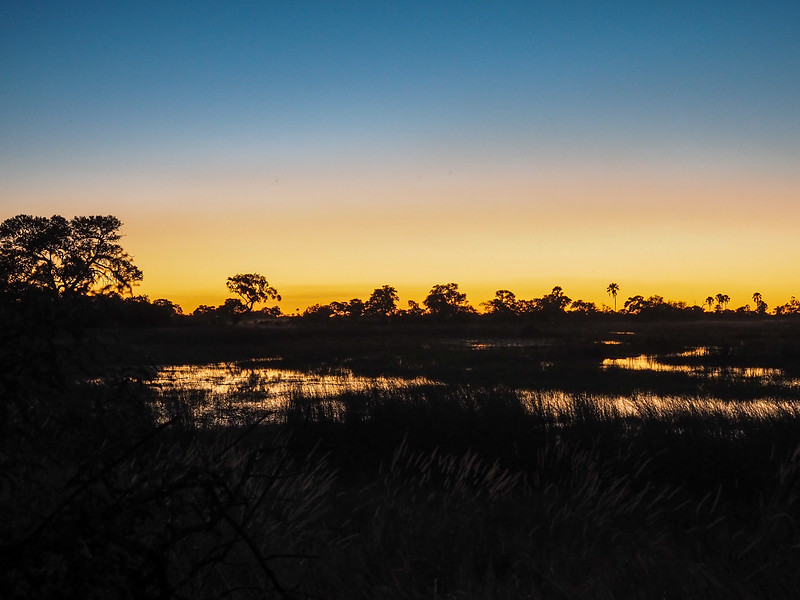 As we were sitting around the fire after dinner, a hippo started grunting so close by that a few of us actually screamed. It doesn't get much more wild than staying overnight in the Okavango Delta.

The Okavango Delta from the Air

Seeing the Okavango Delta from the ground – be it by water or on foot – is definitely a must. But you can't truly grasp the true size of it unless you can also see if from above.

The next morning saw me and two Aussies from my overland trip climbing into a doorless helicopter for a flight over the Delta. As we rose up into the air and got our first glimpse of the skeletal-like ribbons of water that signified the beginnings of the annual flood, I got chills. 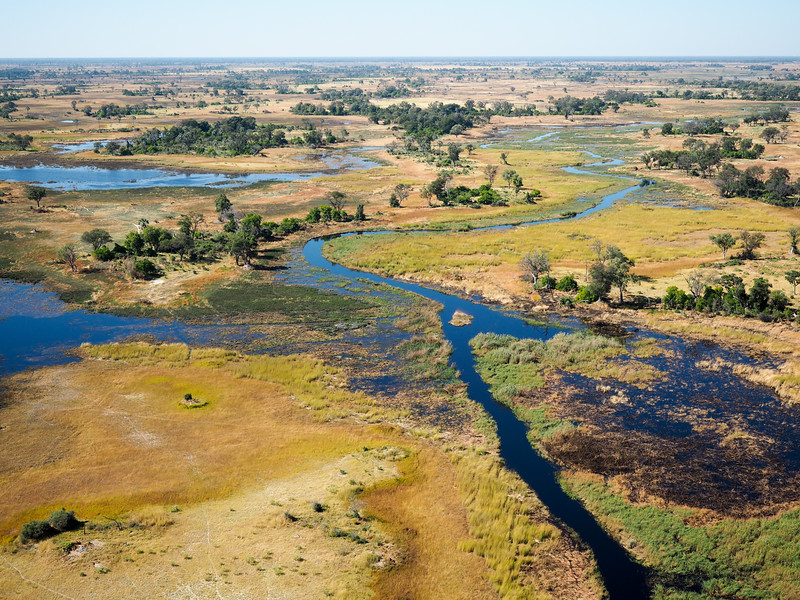 Our pilot flew us all over the Delta, pointing out big trees, wildlife trails, patches that had been burned by fire, and of course the wildlife itself. We saw zebra, wildebeest, hippos, and even a couple of elephants from above.

And when he dipped down low to give us “a giraffe-eye-view,” I giggled like a little kid.

Not only is it super cool to fly in a doors-off helicopter (I don't know many other places you can do it), but I came away with a much greater appreciation of the Okavango Delta.

I totally understand now why so many people dream of visiting.

My overnight trip into the Okavango Delta was an optional extra on my overland trip through Southern Africa with Acacia Africa. This, along with the helicopter tour I did ($150 per person) was organized through Delta Rain, who offer similar overnight trips to non-overland groups, too.

If you're interested in visiting the Okavango Delta – especially during high season when the Delta is flooded – you'll want to book ahead of time. Tourism in Botswana is “regulated” by the high cost of tours and entrances to game parks, and also the fact that many lodges are small and intimate. This means that if you want a unique and/or luxury experience in the Delta (or Chobe or anywhere else in Botswana), you need to be prepared to pay for it, and you need to book ahead.

If you want to check out the same overland tour I did from Cape Town to Victoria Falls, it's Acacia Africa's 19-day Desert Tracker. The same company also offers a Delta Chobe Waterways tour that focuses more on Botswana if that's what you're most interested in.

While you're here, check out the Okavango Delta video I made, too!

Is the Okavango Delta a place you'd like to visit someday? Which “way” would you most want to experience it?

*Note: I received a discount on the overland trip with Acacia Africa that included this Okavango Delta excursion. As always, though, all opinions are 100% my own.