Traveling with a Laptop: MacBook Air 11 vs. Dell XPS 13

In many ways, I am not your average traveler. Travel is usually not a “vacation” for me — it's my job, and that means I'm often working on the road. This means that I have to carry a decent amount of technology with me whenever I leave home.

And, as someone who works full-time online, a laptop is a must-have for me.

I use my laptop for everything on the road — for writing, photo editing, video-making, social media updating, and all-around entertainment. So obviously I want to find the absolute best laptop possible to have as my traveling companion.

I'll be upfront: I've been a Mac user for years. I started out on a 15-inch MacBook Pro, and then switched over to an 11-inch MacBook Air a few years ago when I started traveling more and couldn't bear to lug around a huge computer any longer.

But recently I had the chance to try out Dell's new XPS 13, an award-winning laptop with an “infinity screen” and Intel 5th generation core processor.

At first, I was going to say no. I mean, as much as my boyfriend makes fun of me for it, I LIKE Apple products. But I realize that not everyone is an Apple/Mac fan. So I thought it would be useful to try out a PC in order to compare the two. After all, when choosing a computer for traveling, you want to weigh all your options before plunking down $1,000 or more, right? 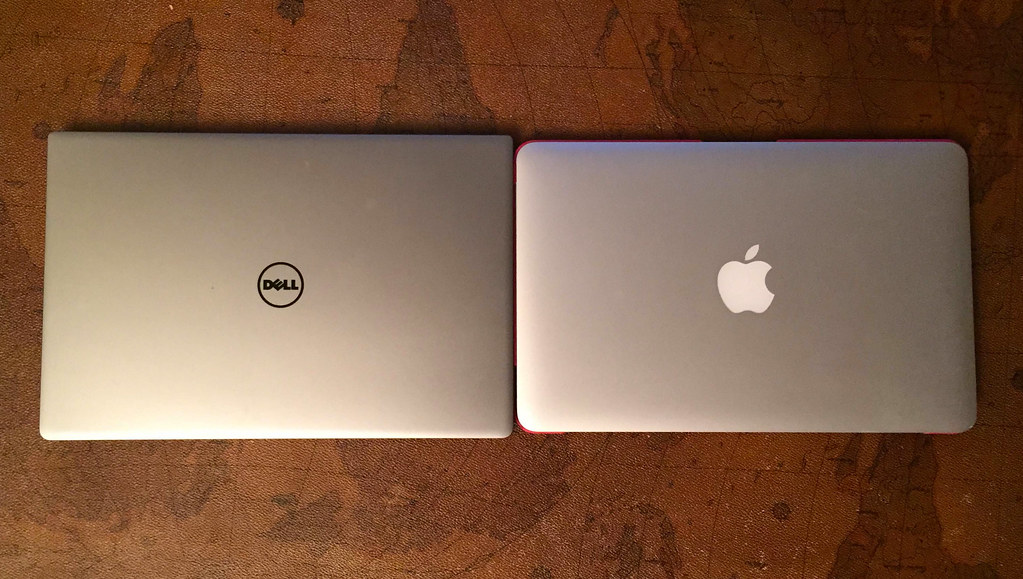 Portability — At just 2.38 pounds and only 11 inches from corner to corner, the size of the smallest MacBook Air is perfect for traveling. I can easily stow the computer in my carry-on bag or even a large purse and not feel completely weighed down by it. It makes working on planes and trains really easy, too.

The inclusions — MacBooks all come standard with basic photo and video editing software (iPhoto and iMovie), which is good enough for most of the editing the average person would want to do. I liked not having to pay for and install separate programs for basic editing.

Apple integrations — Since I also have an iPhone (and an older MacBook), it's super easy to integrate everything since it all uses the same operating system.

What I don't like about the 11-inch MacBook Air

The screen size — Sometimes the screen is just TOO SMALL. It takes some getting used to, and is sometimes frustrating when I'm trying to do something but can only see a tiny portion of a website on my screen.

No SD card slot — There's no built-in slot for SD cards on the smallest MacBook, meaning I have to carry around a USB card reader — which I frequently misplace.

The battery life — Yes, my MacBook Air is now aging slightly. But from the beginning the battery life on this tiny computer left a little to be desired. Using the computer heavily, I could only ever eke out 5 or so hours of battery life at best (and it's even less now).

Now, let's move on to the Dell XPS 13. At first glance, the computer looks REALLY similar to the MacBook Air (see side-by-side comparison photo earlier in this post). And, to be honest, the functionality is just as good, if not better.

Portability — The XPS 13, despite having a 13-inch screen, actually has almost exactly the same “footprint” as my 11-inch MacBook Air, and only weighs in at 2.6 pounds. That's a HUGE bonus — I get 2 extra inches of screen real estate without sacrificing any portability.

The screen — I got the touch-screen version of the XPS 13, which has a super high-definition Quad HD+ display (3200 x 1800). The screen on this puppy is incredible. Seriously. It’s not only super hi-def, but the actual display reaches almost to the edge of the bevel, hence the “infinity screen” claim. (Note: The non-touch-screen version has a FHD (1920 x 1080) infinity display.)

The battery life — The non-touch screen version of the Dell XPS 13 boasts up to 15 hours of battery life (and even with the Quad HD+ touch display, you can still get up to 11 hours). Even using the laptop heavily, I was easily getting 8 hours or more of battery life. That means I could take this on a longhaul flight without powerpoints and be able to watch at least a couple movies without it dying.

Power companion — I got a 12,000 mAh Dell Power Companion with my XPS 13, which is basically an extra battery. The external battery fits in the palm of your hand, and you can use it to charge everything from your laptop to your phone or tablet. This is ideal for a traveler — and Apple doesn't make anything similar that pairs perfectly with their laptops.

Windows — After years of working on a Mac, it was difficult for me to adjust back to Windows. Windows 8.1 isn't terrible, but I still hate how some things look on it. It's mostly an aesthetics thing, though, and is probably something I could get used to again over time.

The touchpad — My biggest complaint about the Dell XPS 13 was that the built-in touchpad didn't always work smoothly, and never felt quite as fluid as the touchpad on my MacBook Air. I realize that this could easily be solved with a wireless/portable mouse, but carrying around extra stuff while traveling is a pain and I try to avoid it.

It's also worth noting that, when using a laptop with such a ridiculously hi-res screen, you'll soon realize that not all websites are created equal when it comes to how hi-res-friendly they are. Many websites have yet to optimize photos and graphics for retina/other high-resolution screens. This of course is not the fault of the computer — but I still wanted to mention it.

So, all in all, they are pretty similar when it comes to pricing. You might get *slightly* more bang for your buck with the Dell, but just barely.

So what's the verdict?

Well, to be honest, I think it really comes down to personal preference. If you're a die-hard Apple/Mac OS fan, then you probably won't take well to the Dell (or any other PC, for that matter). Similarly, if you've always used PCs and are a Windows fan (or if you're just really opposed to Apple products), then a MacBook won't work for you.

Both computers have pros and cons. Both are about equal when it comes to size, weight, and price. So, in the end, it's a decades-old question: Mac or PC?

Do you travel with a laptop? If so, what's your computer of choice?

*Note: I received a Dell XPS 13 to try out at home and while traveling. My opinions are, as always, completely my own, though, and I was not obligated to write anything positive about the computer. If something is terrible, you can trust me to tell you so!