The Time I Almost Died in Iceland

Home » Europe » Iceland » The Time I Almost Died in Iceland

It's no secret that writers often exaggerate events in order to make them seem more interesting or exciting.

You know, like writing about “a bug as big as my face,” or “a sandwich so amazing I cried” or “the BEST beach in the world EVER.” In this line of work, superlatives and hyperbole are sometimes your best friends.

But I promise you that I am not exaggerating at all with this next statement:

I seriously almost died in Iceland. 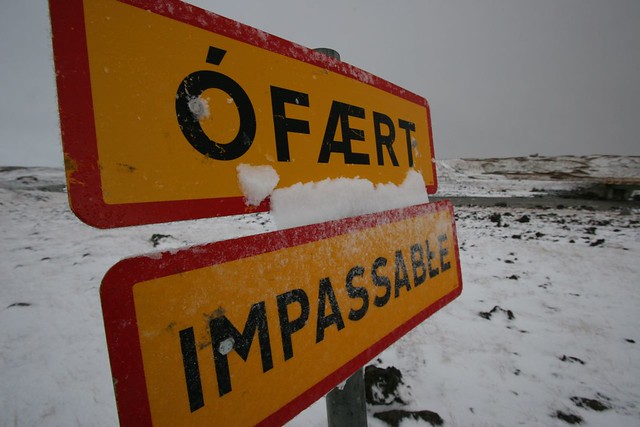 It was yet another overcast day in the Land of Fire and Ice, and I was trundling along in a Land Rover with 3 other passengers and our Icelandic guide, Christian. We had just made a brief stop at Þingvellir National Park in the rain, and were now heading up into the mountains to drive and hike atop Langjökull, Iceland's second-largest glacier.

On a tour that didn't indicate a whole lot of danger or excitement in its tour description, we were expecting a leisurely drive up to the glacier, followed by lava tube caving and looking at some waterfalls.

Well, we got a bit more than we bargained for.

It began with snow-packed roads as we ascended into the barren mountain pass of Kaldidalur. Christian assured us this was nothing out of the ordinary at this time of year in Iceland, however, so we simply enjoyed the ride and marveled at the alien-looking landscapes. 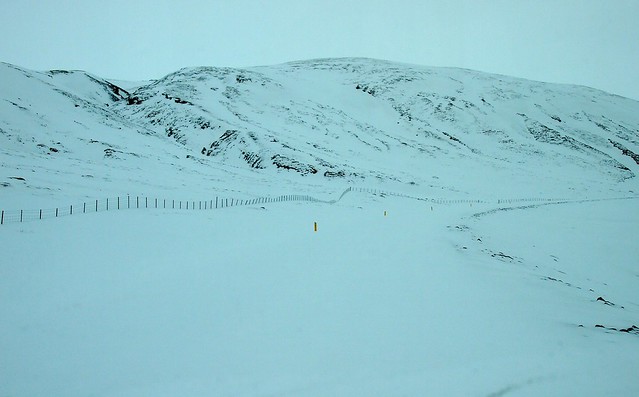 But we probably should have started to worry when the “Impassable” road signs started coming into view — signs that we drove right past.

Or maybe worry should have set in when Christian told us he hadn't driven this route in over a month.

Or perhaps the fact that no one at all had driven this road for at least 4 days, during which time a blizzard had moved through the area, should have concerned us.

Oh and did I mention there was NO ROAD, and that Christian was simply following a squiggly green line on the GPS mounted on his dashboard? 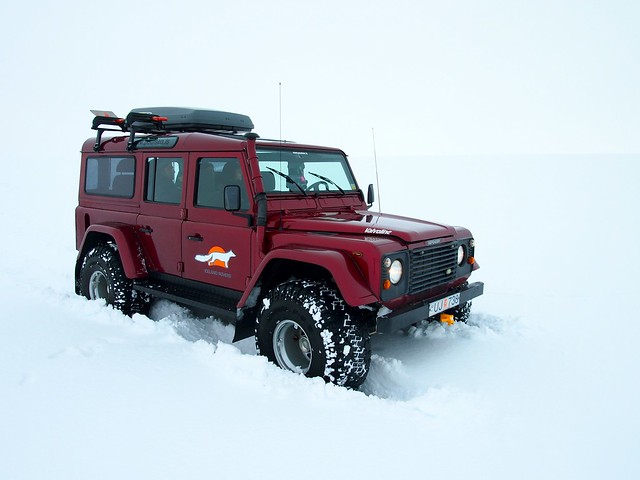 It was all going well at first.

But then we got lost.

And then we got lost a second time while trying to get un-lost from the first wrong turn.

And then the snow got deep enough that Christian had to let air out of our tires.

And then we got lost again, and Christian took the first of many “short walks” to try to find the safest way up the mountain. 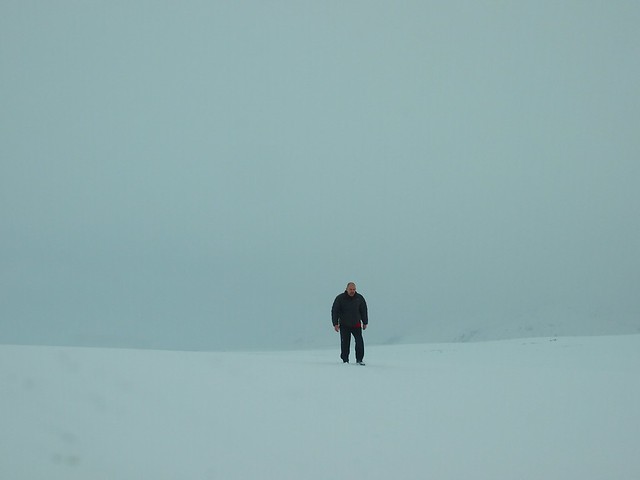 After that, we started getting stuck in the snow every few feet. Christian let more air out of the tires (more surface area = more traction) and there was a lot of rocking back and forth. I was glad I'd taken some Dramamine before leaving Reykjavik.

And then it actually started to get a bit scary.

We were heading up the side of a mountain, and it was questionable as to whether we were actually on a road or not. Regardless, the snow got too deep for us to continue any further.

“We'll have to try to go around it,” Christian told us, and began to reverse back down the way we'd come.

After we'd driven backwards about 50 feet, Christian turned the wheel, prepared to try and skirt the mountain. Except we weren't at the bottom of the mountain. We were still about halfway up, clearly on a ridge of some sort with our jeep at a very odd angle.

Christian began driving forward. And then the nose of our jeep suddenly went out from under us. Christian slammed on the brakes and began trying to back up. He also began whistling as if nothing at all was out of the ordinary. As if we weren't now hanging off an invisible ridge in the snow, at risk of tumbling over at any moment.

At this point, from my front-seat vantage point, I started to silently freak out. I made sure my seatbelt was fastened. I began examining the roof of the Land Rover for structural integrity. I briefly considered what broken legs would feel like. 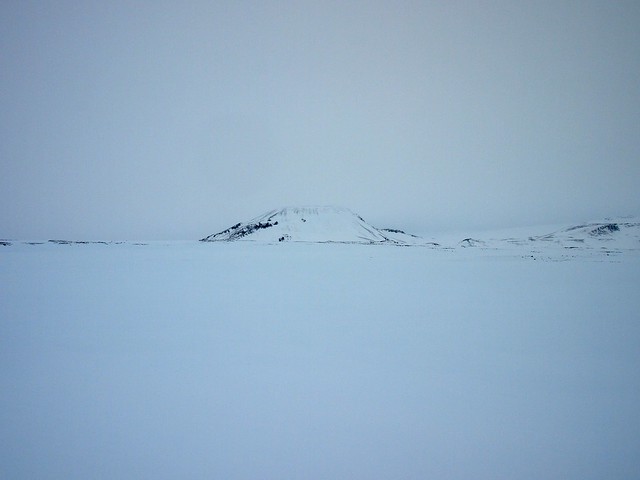 And then it happened. I don't know if we just slipped, or if Christian gunned it forward knowing that backing up was impossible, but the next thing I knew, we were doing a not-so-graceful nosedive into the white nothingness in front of us.

I reached up, grasping helplessly at the ceiling, convinced we were going to flip over. I screamed. Twice. The sort of blood-curdling screams that you never knew your vocal chords could even produce until they do out of sheer terror.

This is it, I thought.

But then, miraculously, we were landing hard in the snow. The British girl in the back who hadn't been wearing a seatbelt was almost in my lap, and my heart was beating so fast I thought I was going to pass out. We had free-fallen off a cliff in a Land Rover in the middle of the Icelandic wilderness.

Next to me, Christian nonchalantly asked, “Is everyone OK?” We told him we were, even though I could see my fright reflected in the faces of everyone in the back seat.

Slowly, we starting moving forward again, Christian much more cautious now that we were clearly far from any road and probably surrounded by deadly cliffs and jeep-eating fissures. (Probably.)

We inched our way back up the ridge, getting stuck constantly and Christian taking more “short walks” to try and find the tracks we'd left on the way up. I think we were all holding our breaths. None of us wanted to ask Christian if this was a common occurrence on this particular tour. 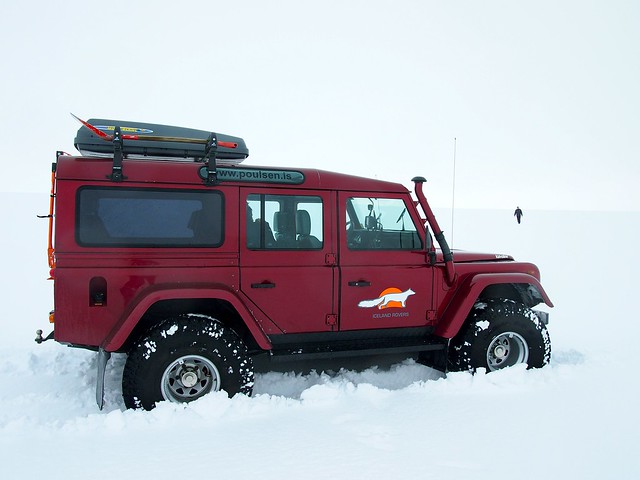 What seemed like hours later, we found our original tracks in the snow. I'm pretty sure there was applause and a collective sigh of relief as we made our way down from the mountain and back onto a road that was more than just a squiggle on a GPS.

But the relief was short-lived, as, once we were back on a gravel road that wasn't covered in snow and Christian had put some air back in the tires, we discovered that our “fall” had severely messed up the steering column and front axle in the Land Rover. Christian could barely even keep the car on the road.

We inched along through the valley while Christian made some phone calls to some local farmers. We had to stop for half an hour for him to fix the steering column by banging on a lot of things under the car with a sledgehammer.

“I don't think we'll make it to the glacier today,” Christian told us with a slight smirk once he finally got back behind the wheel.

I can assure you that none of us really cared. We were just happy to be alive.

Click here for Part 2, in which I tell you about all the awesome, non-terrifying things we did/saw later on this tour!

And, I should mention that Christian was fantastic throughout all of this. He was calm and composed, and it was definitely thanks to his expert driving that we came down from the mountains in one piece.

Do YOU have any scary, “I-almost-died” stories from your travels?

My “Essential Iceland” tour with Iceland Rovers was provided to me on a complimentary basis, thanks to the help of ICELANDisHOT. As always, all opinions are my own.

58 Comments on “The Time I Almost Died in Iceland”