The Lazy Person’s Way to Bike the Golden Gate Bridge

I had quite a few things on my San Francisco “to-do” list — visit Alcatraz, explore Chinatown, find the “Full House” house… and, of course, bike the Golden Gate Bridge.

The 1.7-mile Golden Gate Bridge is the shining icon of San Francisco. It's international orange towers and cables are known the world over, and it is said to be one of the most-photographed and well-known bridges in the world.

I knew simply seeing it from afar was not going to cut it. 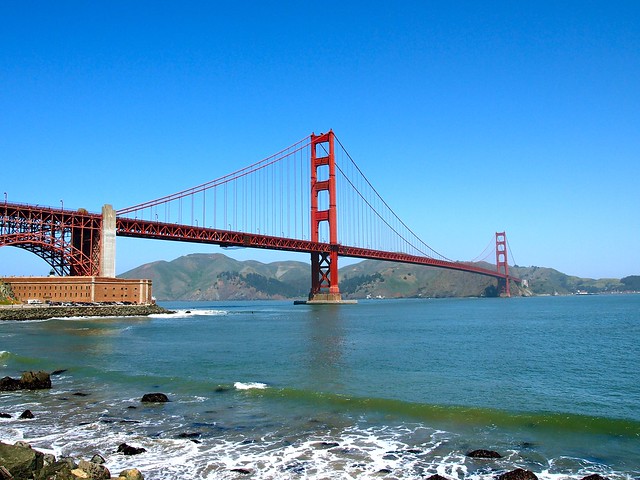 But as I wandered around San Francisco for 5 days and watched tourists struggling with their rental bikes on San Francisco's infamously steep hills, I began to have second thoughts. Those people's calf muscles sure looked tired…

Yes, I COULD bike the bridge physically. I'm not THAT out of shape (okay, maybe I am, but shh). But the thought of sweating and panting and suffering just to say “I did it” didn't really seem very appealing. After all, this was MY trip. Why should I be miserable during any part of it?

I was almost ready to scrap the biking altogether. But then I heard about the Electric Tour Company. 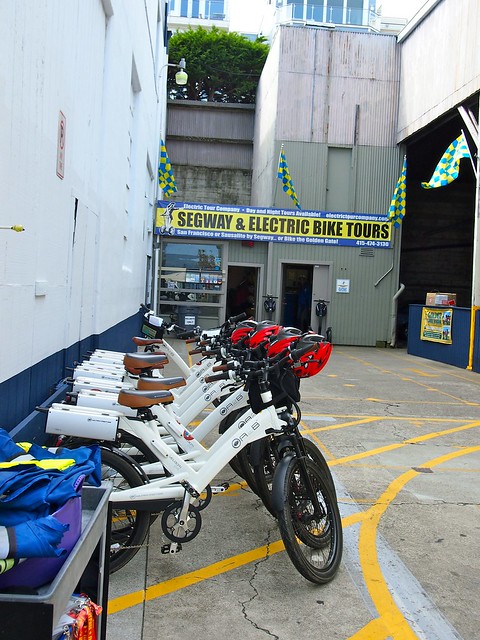 The company began as the first to offer Segway tours in San Francisco. Since then, they have expanded to also offer electric bike tours across the Golden Gate Bridge to Sausalito.

Yes, electric bikes. Bikes with little motors on the back. Bikes that you barely even have to pedal. Bikes for lazy people like me.

I immediately decided that THIS was how I was going to experience the Golden Gate Bridge, and called and booked a spot on a tour for my last morning in the city. 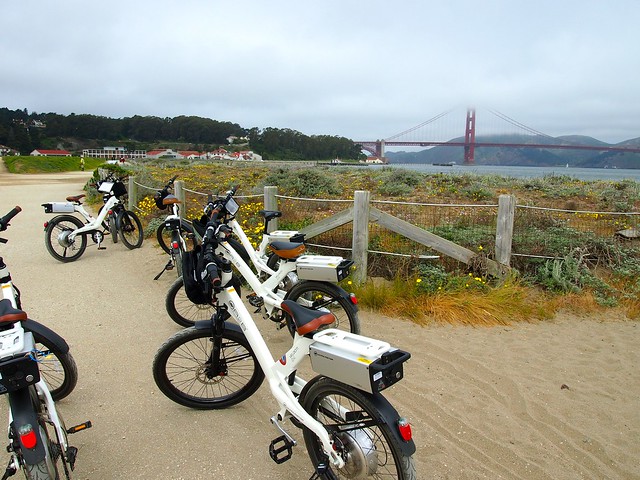 An electric bike tour across the Golden Gate Bridge

The morning dawned cool and cloudy — perfect biking weather — and I eagerly made my way to the EBC's training spot near the corner of Beach and Hyde just before 10 a.m. After being fitted for helmets and getting a quick how-to lesson on using the electric bikes, my group was ready for its ride. My tour group contained 3 Brazilians, myself, two Segway tour leaders who wanted to give the bike tour a try, and our enthusiastic guide Christian.

The bikes, it turns out, are even more fun in practice than they sound on paper.

Bigger and more sturdy that your average road or mountain bike, the electric bikes are also fitted with a small battery-powered motor behind the padded seat. The “juice” is given via a throttle on the right handlebar, and the bikes really do get up to a good speed, especially if you pedal at the same time.

Our route took us up a few hilly streets, with quick photo stops in Fort Mason, in front of the Palace of Fine Arts, and on Crissy Field. Here, on the flat ground near the Bay, we were told to “let ‘er rip” to see just how fast the bikes could go.

Pedaling as fast as my legs could take me and maxing out the throttle, I couldn't help but smile as I zipped across the pavement. It was like flying. I could get used to this. 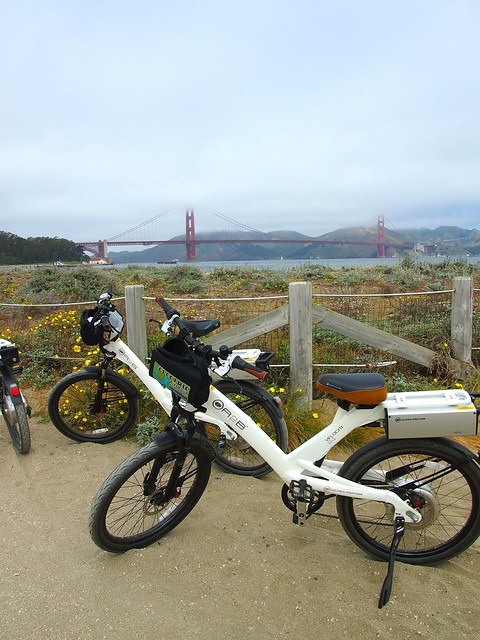 Our final stop before crossing the bridge was at Fort Point, right under the giant orange suspension bridge. This was the first time all week that I was actually seeing the Golden Gate Bridge in its natural, fog-shrouded state, and it definitely had a certain majesty to it that wasn't present on previous sunny days. 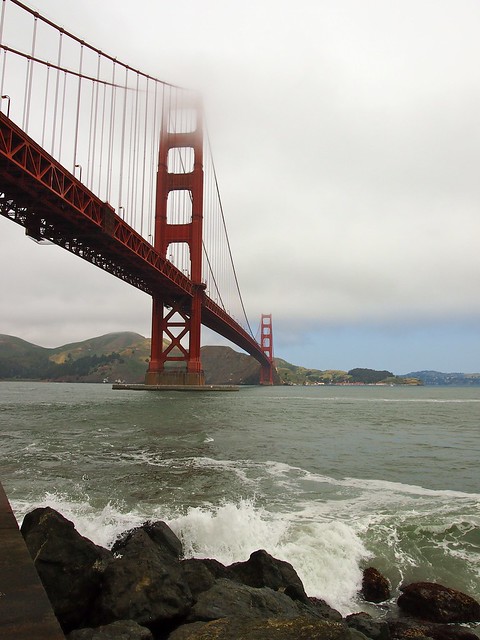 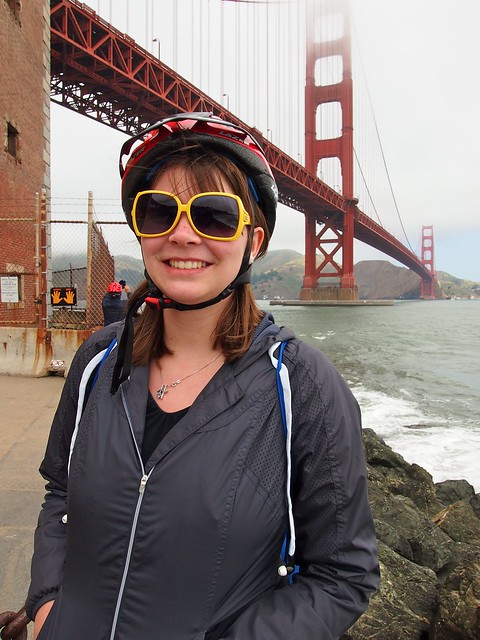 And then, at last, it was time to hit the bridge.

Riding over the bridge on an electric bike is slightly tricky. Since there aren't any bike lanes on the Golden Gate Bridge, cyclists must share space with pedestrians. And since we were technically riding motorized vehicles — which aren't allowed on the pedestrian parts of the bridge — we had to keep our hands off those ever-so-tempting throttles as we made our way across, lest we draw the angry attention of Bridge police (yes, they exist!).

So yes, I DID bike the 1.7-mile length of the Golden Gate Bridge!

We stopped halfway across for photos and to learn some fun facts about the Bridge from Christian (for example, did you know the Bridge is named after the body of water it spans? The “Golden Gate” refers to the stretch of water that separates San Francisco Bay from the Pacific Ocean). 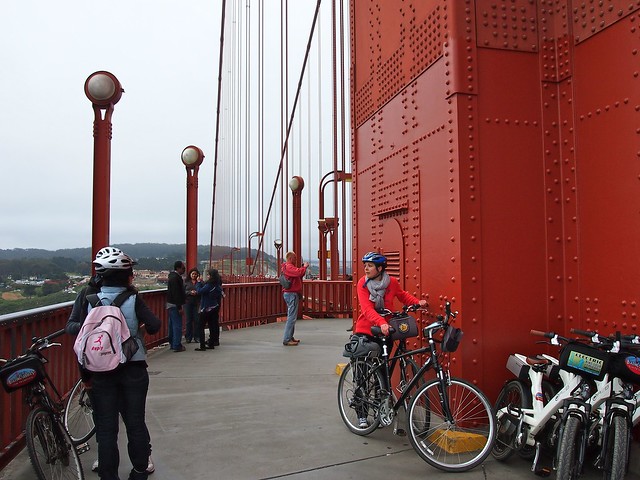 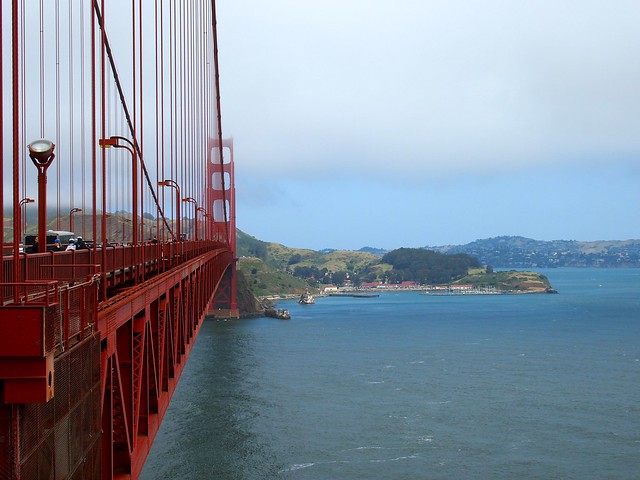 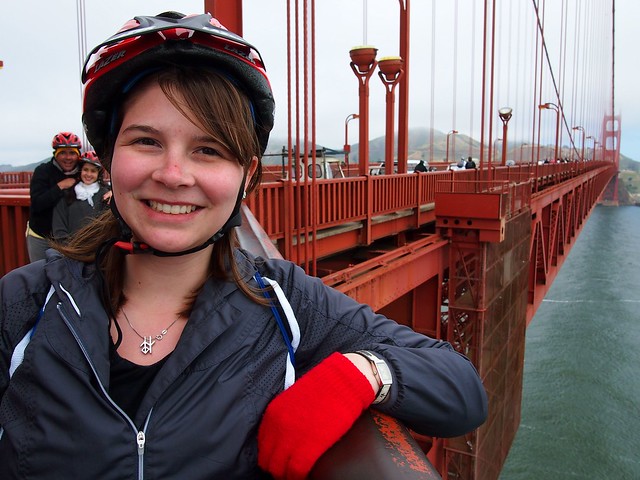 We stopped again once across the bridge in Marin County at a great lookout point, creatively named Vista Point. It was sunny there, even though San Francisco was still cloud-covered across the Bay. Those microclimates are no joke… 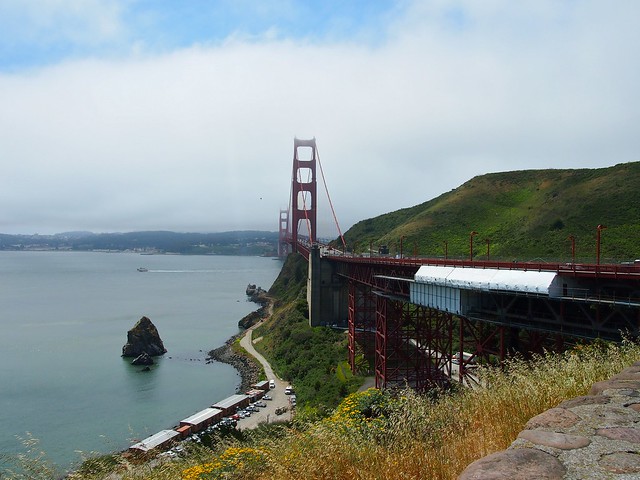 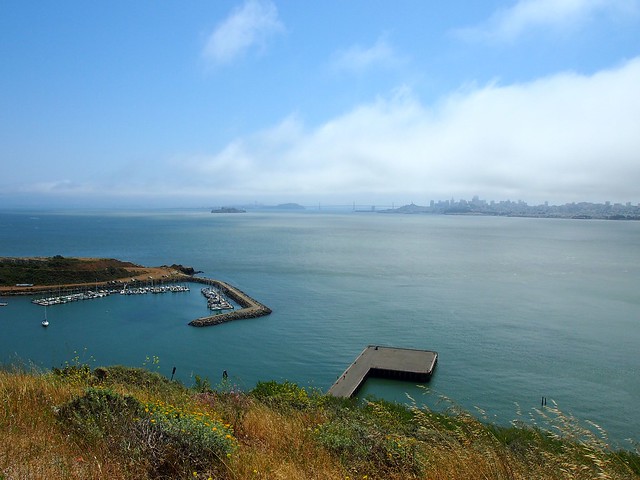 From there, it was downhill all the way to the little town of Sausalito. This sun-drenched town is full of cafes and expensive houses, and often has a rolling fog bank threatening to descend — though it rarely does. This used to be one of the cheapest areas to live outside the city, but now is one of the priciest thanks to its nice weather and close proximity to San Francisco. 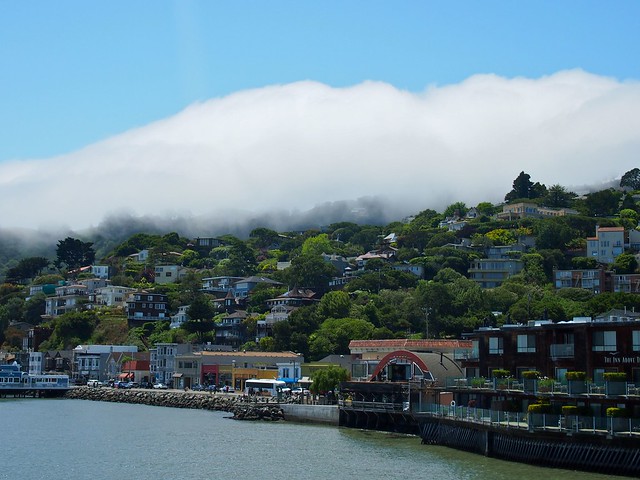 The Brazilians in my group went off to get burgers, while I was invited to tag along with Christian and the Segway girls as they rode a few more blocks into town to grab lunch-to-go at Cibo, a popular local spot.

You have the option to keep your electric bike for the afternoon to explore Sausalito, but since it was my last day and I still had a few places I wanted to visit before leaving San Francisco, I opted to catch the ferry back with the rest of the group.

Sausalito would be great to explore by bike, though.

I grabbed the “Seafood Combo” from Cibo (one shrimp taco and one fish taco on homemade tortillas, and some gazpacho), along with some grape wine soda that Christian recommended. We ate our lunches on the ferry ride back to San Francisco, the sun following us back to the city. 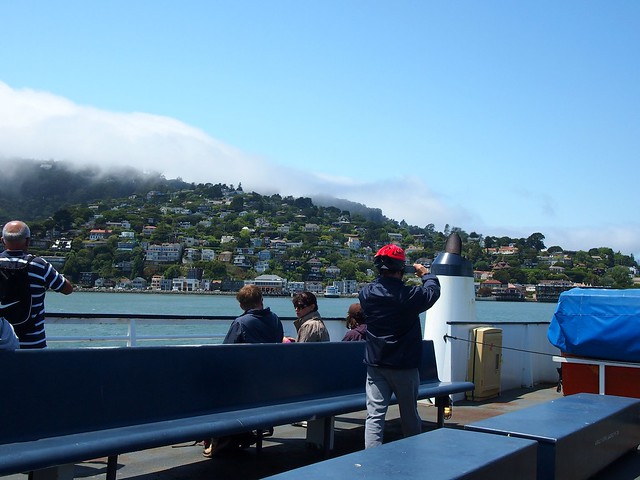 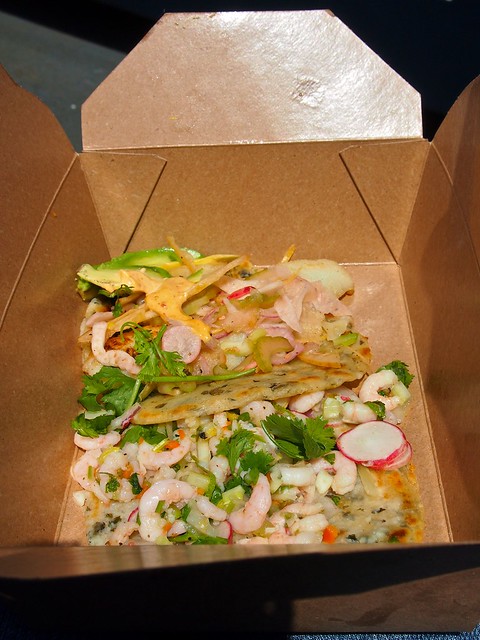 The whole electric bike tour lasted just under 4 hours, and I found myself loving every minute of it. It was nice not to be huffing and puffing up hills, and yet I still felt accomplished at having biked the bridge. I would do it again in a heartbeat.

Want to do an electric bike tour yourself? Sadly, the specific tour I took is not longer available in San Francisco.

But you can check out these electric bike tours in other parts of the city: 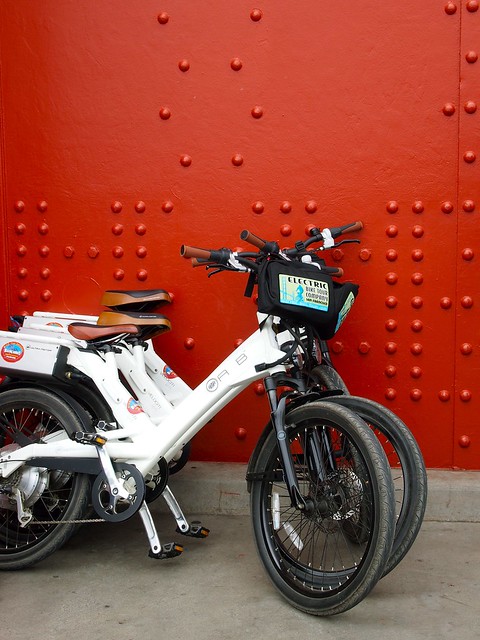 So what do you think? Would you try out an electric bike tour in San Francisco?

*Note: I did receive a complimentary tour from the Electric Tour Company, but, as always, opinions are completely my own and based on my personal lazy tendencies.