The Hoover Dam: A Modern Feat of Engineering

I'll admit that I never knew much about the Hoover Dam.

I knew that it was a large concrete dam on the Colorado River somewhere out West. But that was about as far as my knowledge went.

Well, it turns out that there's a lot to know about the Hoover Dam — and a lot that's actually quite fascinating. 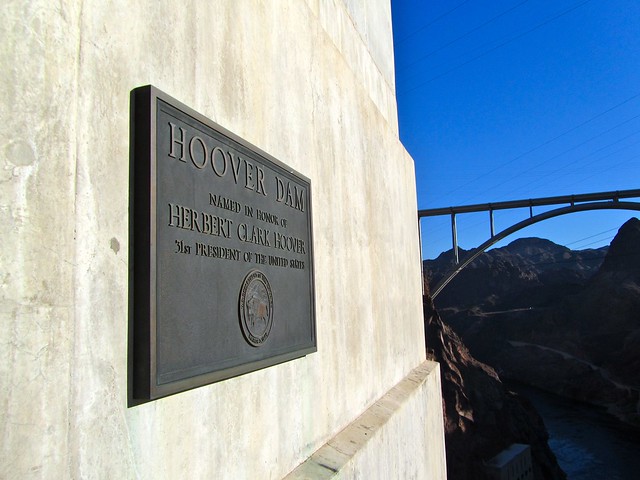 Even though I had always believed that the Hoover Dam was built to harness the power of the Colorado River in order to supply power to nearby towns and cities in Nevada and Arizona, the truth is actually almost the opposite — the dam was actually built to save the surrounding communities from the wrath of the Colorado River, which was known for habitually flooding and causing all sorts of issues.

As early as 1900, the U.S. government began exploring Black Canyon (where the present dam sits) and nearby Boulder Canyon to see if either one could potentially support a dam that could alleviate the area's flooding woes, and at the same time aid in irrigation and produce hydroelectric power.

Black Canyon was finally settled upon by the Bureau of Reclamation, and Congress approved the dam project in 1928. 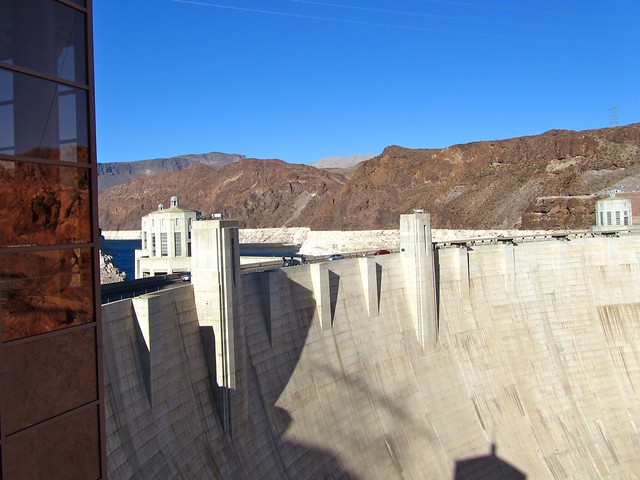 Despite America suffering from the Great Depression, construction of the concrete behemoth on the Nevada/Arizona border began in 1931. Even though a similar project had never been undertaken and many of the construction techniques were untested, the dam was finished by 1936 — two years ahead of schedule.

The Hoover Dam is an arch-gravity dam, which is thicker at the bottom (660 feet) and thinner on top (45 feet). It comprises of roughly 6.6 million TONS of concrete, or 3,250,000 cubic yards — enough to pave a 2-lane highway from New York to San Francisco.

There's so much concrete in this dam that it had to be poured block by block with an intricate cooling system in place. If it had been poured all at once, it would still be cooling and solidifying today. 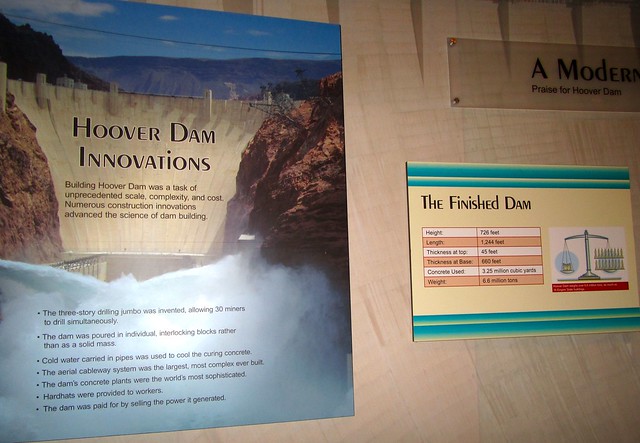 I never really considered visiting the Hoover Dam until I discovered that the route my sister and I planned to take during our summer road trip would have us passing right by the dam. The highway actually used to go right over the Hoover Dam (with the traffic driving on top of it), but they opened a bypass bridge in 2010 to give the dam a break.

We headed over the bypass, and then detoured to the Hoover Dam to take in this engineering marvel.

You really can't understand how huge this dam is until you see it for yourself in person. It is massive. 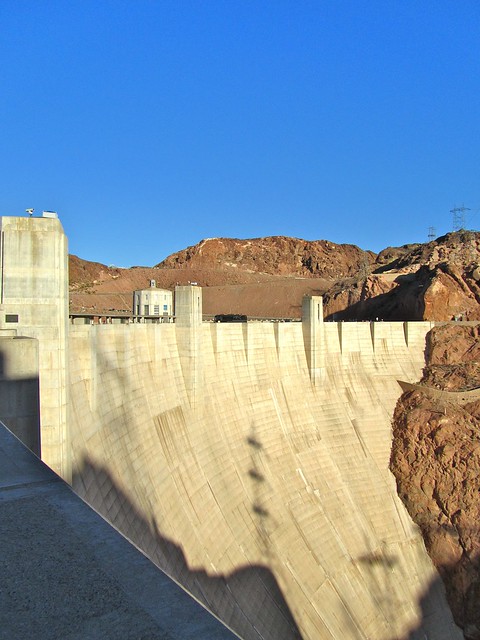 It's amazing to stand on top of it and realize that men built this with their bare hands in the 1930s. It certainly wasn't easy work.

A stroll through the small museum at the dam's visitor center stresses how dangerous it was to be one of the thousands of men employed to construct the Hoover Dam. 112 men lost their lives in the 5 years that it took to build the dam, and everyone employed during that time was paid based on how dangerous their job was.

The legacy of those men remains. Not only is the dam stronger than ever today, but its power station supplies power to Nevada, Arizona, and California, and the lake the dam has formed on the Nevada side – Lake Mead – is a popular recreation area. The nearby town of Boulder City, which was built to house the thousands of men building the dam, is still growing, being named one of the best places to retire in the U.S. in 2009.

And, of course, despite my lack of burning desire to visit, the Hoover Dam is a rather large destination for tourists. Roughly 1 million people visit the dam each year and take the tours offered by the Bureau of Reclamation.

If you're considering visiting the Hoover Dam yourself, here are DOs and DON'Ts to keep in mind:

DON'T pay for parking. Since the main highway no longer passes over the dam, you'll come in from the Nevada side. There is a large parking garage here that's open from 8 a.m.-5:15 p.m. that will cost you $7 per car. But there's really no need to pay for parking. Simply drive across the dam to the Arizona side, where there's a free parking lot. Then you can stroll back across the dam to get to the visitor's center.

DO drive across the dam. Even if you're not going to take a tour or stick around very long, driving across the dam is pretty cool — it's certainly not something you get to do everyday.

DON'T pay to visit the visitor center only. It will cost you $8 to get into the visitor center. While you can get a nice view of the dam here and have access to a small museum packed with information, it's not worth $8 on its own. Instead… 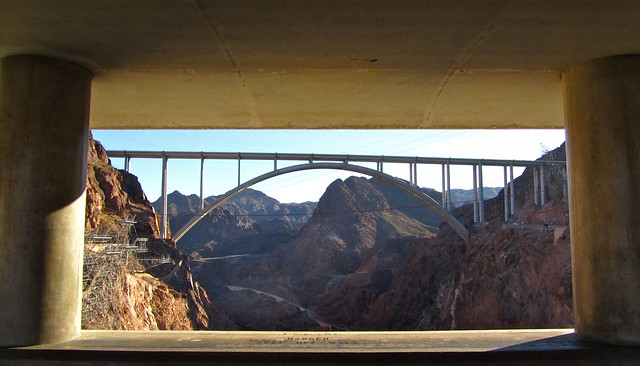 Don't have a car but still want to visit the Hoover Dam? It's located less than an hour from Las Vegas, meaning you can easily book a day trip. Check out these Hoover Dam tours from Las Vegas:

Have you ever visited the Hoover Dam? If not, is it a place you would stop at?

32 Comments on “The Hoover Dam: A Modern Feat of Engineering”