Riding the Bamboo Train in Battambang

Just outside the Cambodian city of Battambang lies a set of railroad tracks.

These tracks have long since seen real train carriages running on them, however. 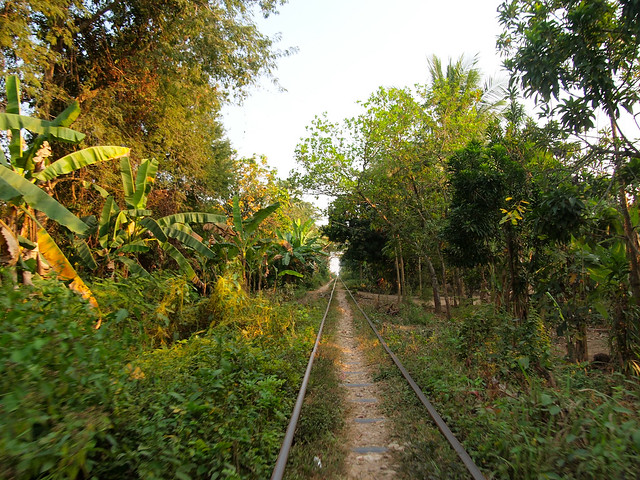 Though it's rumored that Cambodia‘s train rail will eventually get back on its feet, for now these tracks are populated by a different sort of vehicle. 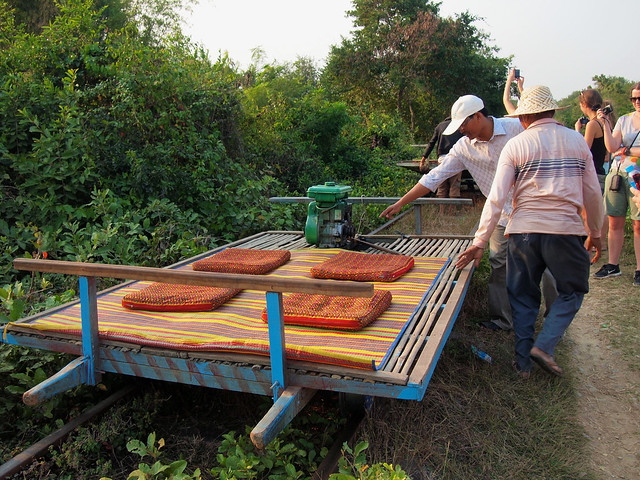 This is a norry, colloquially known as the “bamboo train.”

Made up of a bamboo/wooden pallet set atop steel wheels and two axels, the “bamboo train” is anything but a train. Powered by a whiny lawn motor engine, these “trains” began being used to transport goods and livestock once the real trains stopped running.

Today, though, the locals make more money by ferrying tourists to and fro on the one-way tracks. 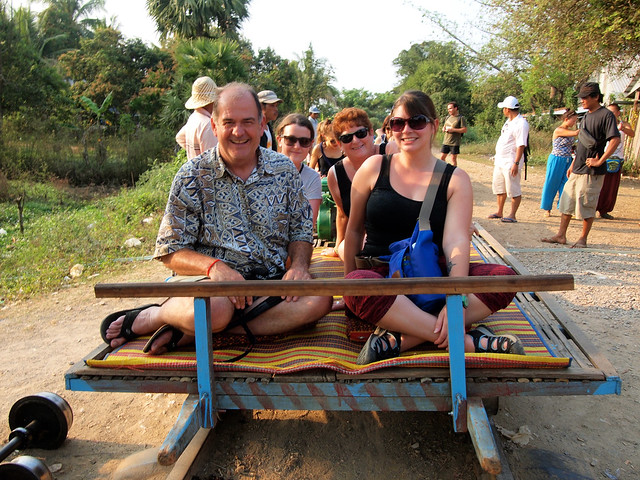 Riding the bamboo train is not, in fact, a leisurely jaunt through the Cambodian countryside. It may seem like it will be that way when you first settle in for the ride on a cushion atop the bamboo frame. 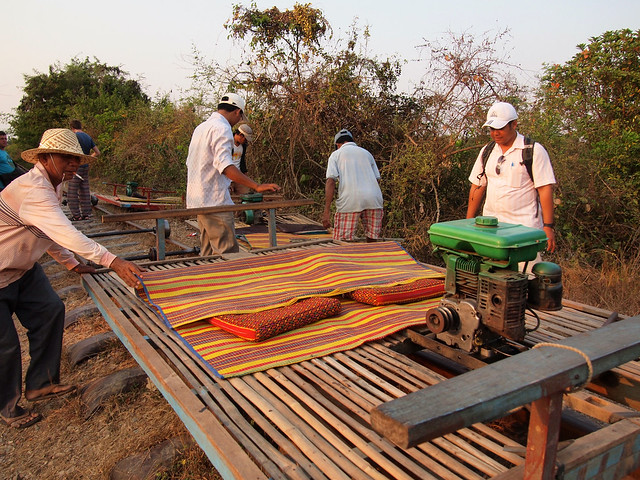 But then the motor starts sputtering (perhaps after a few pulls and a bottle or two of gasoline), and soon you're gripping at anything you can get your hands on as you zip along the uneven tracks at 30 miles per hour (see the video below to get a sense of the speed). 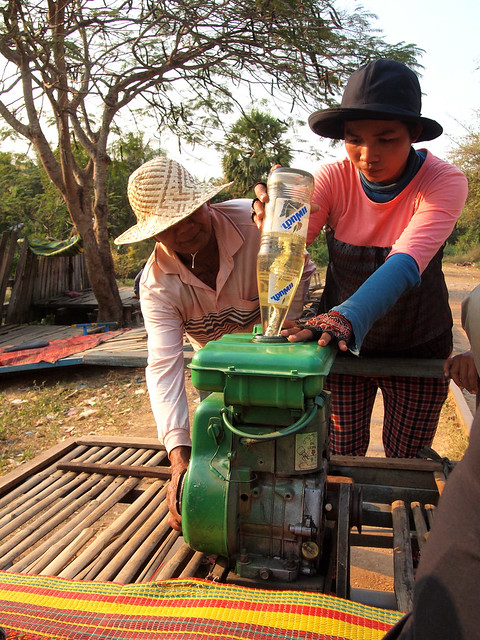 Yes, the bamboo train can MOVE.

But, since this is only a one-way track, the bamboo train also has to make frequent stops. 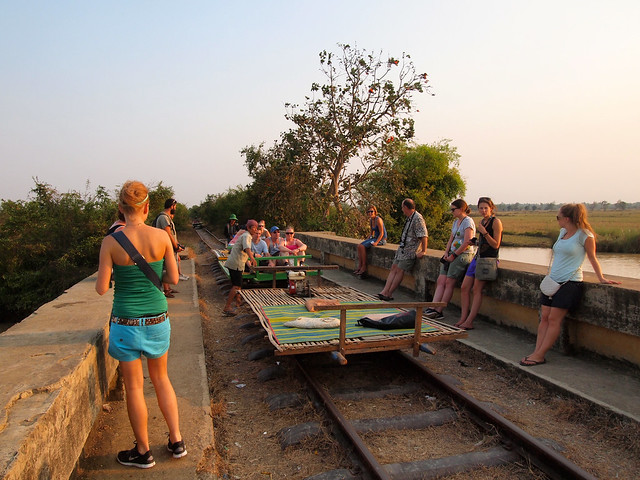 Because the “cars” run all day between the starting point near Battambang and a village about an hour up the tracks, that means that there are always people traveling in opposite directions.

So what happens when two cars traveling in opposite directions meet?

Well, basically a big game of chicken, with the “winner” being whichever car is holding more people or whichever group has the most number of cars in a row.

If you don't win in this game, it means climbing up off your car so that your driver can dismantle it (yes, by hand) to let the other car(s) pass. 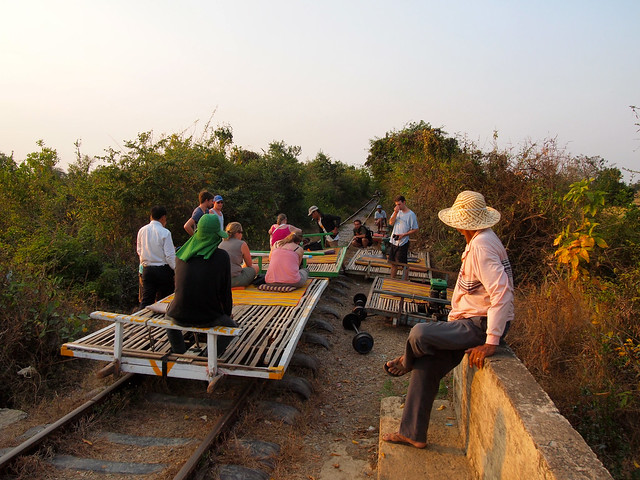 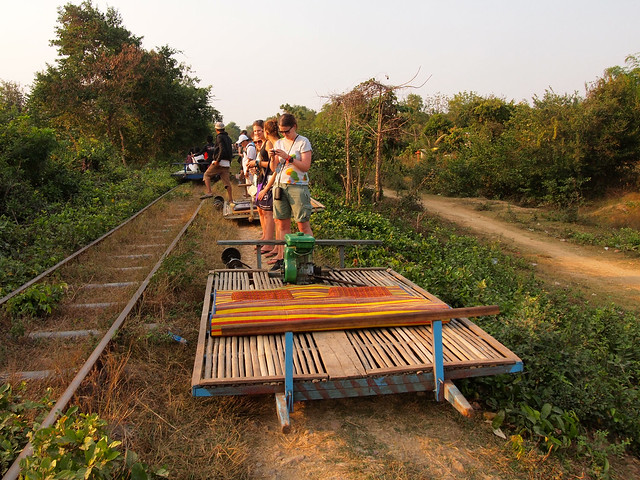 Rumors are that this last vestige of the bamboo trains that used to populate all of Cambodia's disused train tracks will also be shutting down soon.

How soon, of course, nobody knows.

But if this is one quirky travel experience you'd like to have, my advice would be to do it soon.

**Note: I rode the bamboo train with my Cambodia tour group, and since we went at the end of the day, we decided not to go all the way to the village that most tourists are taken to. I've heard unfavorable tales of this village — of tourists being made to buy drinks and snacks that they didn't want just so they can turn around and go back the other way. We turned around before making it to this village, and I overall really enjoyed the bamboo train experience!

Would YOU want to ride the bamboo train in Cambodia?

*Note: I visited Battambang as part of a complimentary tour of Vietnam and Cambodia with Intrepid Travel, however I paid for my own extras, such as a countryside tuk-tuk tour and a ride on the Bamboo Train.

36 Comments on “Riding the Bamboo Train in Battambang”