Why I Won’t Get Mad If You Call Me Lucky

It happened a couple months ago, as I was entering back into the U.S. through immigration at Newark airport. I was standing in line waiting for my turn to get stamped in when I caught a snippet of the conversation happening two immigration lines away from me.

An older African woman was going through immigration after her daughter. She handed over her passport and other documentation to the young immigration officer sitting in his cubicle, and answered his question about how long she was staying in the U.S.

“No, six WEEKS,” the woman corrected him.

The immigration officer then turned to his buddy in the next cubicle and said, “Six months. Maybe a slip of the tongue there?”

He kept going on about it, and then asked his officer friend if he should ask the woman to take off her winter coat.

“Are you pregnant?” he abruptly addressed the woman. And then, to his buddy in the same tone of voice: “God knows we don't need any more of THAT in this country.”

Standing two lines away watching this exchange, I was livid. Not only was this officer putting words into this poor woman's mouth, but he was acting as though she was too stupid to understand anything he was saying.

In that moment, I was embarrassed to be holding an American passport in my hand. 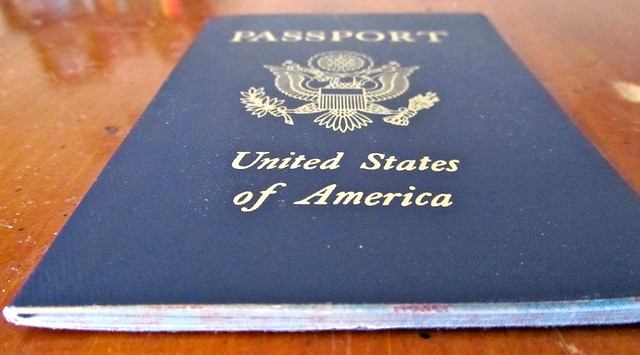 Now, I understand that immigration officials have a job to do. And I'm sure they come across plenty of people who ARE trying to get into the country with less-than-wholesome intentions. But that does not give them the right to treat certain people passing through immigration as less than human.

I'm not saying I've never had an issue crossing a border before (I'm looking at YOU, Canada), but never have I been profiled or degraded because of where my passport is from or the color of my skin.

After getting my own passport stamped that day, I found myself reflecting again and again on that exchange at immigration. I can't begin to fully understand what that woman was feeling at that moment, but I guarantee the feelings weren't positive. It made me seriously examine my own privilege as a traveler.

Every once in a while, someone will say something to you – about your job or your success – that will come across as giving something outside of your control all the credit. Example: When someone says to a photographer “OMG your photos are so amazing – what kind of camera do you use?” As though the equipment is 100% responsible for those incredible images, and the photographer's talent and skill has nothing to do with it.

In the blogging (and especially travel blogging) community, comments that elicit this sort of response include “And you actually make money doing that?” (which is assumes that blogging isn't a valid career) and “You are SO lucky; I wish I could do that.”

Recently, as I was answering questions for an interview about my blog, this “lucky” comment came up. The interview question was: “It’s easy for someone to think ‘she’s so lucky' because you get to travel the world. Like something was handed to you. How would you respond to that?”

The knee-jerk response to the “lucky” comments is to respond back that you've worked your ass off as a travel blogger to get to where you are – and that most people CAN do what you're doing if they're willing to make sacrifices and put the work in.

But you know what? That's not true.

NOT everyone can travel the world like I do. Certain things HAVE been handed to me. And I AM lucky.

As a travel blogger, it's my job to inspire people to want to see the world. I love using my site to share my stories and photos, but, at the end of the day I want my readers to book a trip or start planning a vacation to somewhere that they've read about on my blog. Destinations and travel companies I work with want this, too – it's the reason why many travel bloggers are able to get sponsored (and sometimes even paid) to travel.

But the reality is that not everyone is able to go to all the places I visit. In fact, many people aren't able to go anywhere at all.

Travel is not a right. It's a privilege – and one that I am very lucky to have.

Yes, it's true that I've worked hard over the past six years to turn what was once just a hobby into my career. A lot of my success as a blogger DOES come down to me putting in the blood, sweat, and tears.

But some of it comes down to luck, too.

None of these things were in my control; I had no say over where I was born or to whom. All of that comes down to luck.

And it's mostly because of all that luck that I am now able to travel as much as I do.

Sometimes, when I'm looking at my blog as a business and travel as work, it's easy to forget this. It's easy to take for granted the fact that I do for a living what some people only daydream of. People who take zero vacation days a year because they don't have any, or people who work minimum wage jobs and struggle to provide their families with the basic essentials, nevermind vacations. People who live in impoverished countries, or under governments that make travel impossible.

I have struggled and worried about money over the years, but I've always been able to afford shoes on my feet, food in my belly, and a roof over my head. Many people around the world can't say the same.

All those blog posts out there telling you how easy it is to save up money to travel the world? They definitely apply to an audience of similarly lucky and privileged people like me.

And I don't ever want to forget that.

Because travel IS a privilege. And I won't get mad if you call me lucky.

If you're interested in reading more about the subject of privilege and travel, here are some other posts you should read:

Have YOU ever had a travel experience that reminded you just how lucky you are?