Not in Kansas Anymore (or Adventures in a Beijing Techno Club)

I now know what it must have been like for the young girl from black-and-white Kansas to suddenly find herself surrounded by short people with funny mustaches urging her to follow a brilliantly yellow-colored road.

Except, there aren’t any mustachioed munchkins in my story.

My “not in Kansas anymore” story takes place in China. Beijing, to be exact. 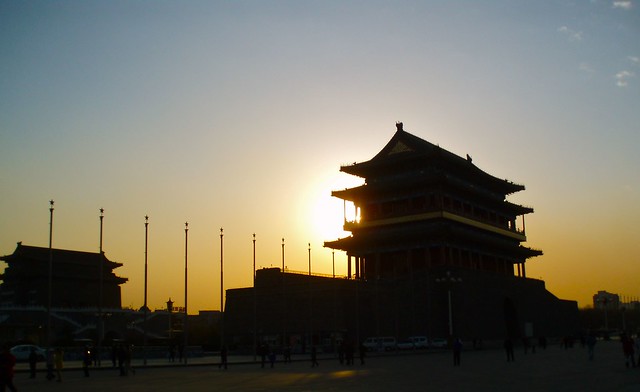 The year was 2007, and I was touring Beijing and Shanghai for a week with my college marching band. Earlier in the day, we had played Kelly Clarkson songs on the Great Wall of China while curious and awed Chinese tourists watched.

Then again, maybe they weren’t curious and awed. Maybe they were just wondering why the hell we all had sparkly feathers sticking out the tops of our hats.

I would stare, too. 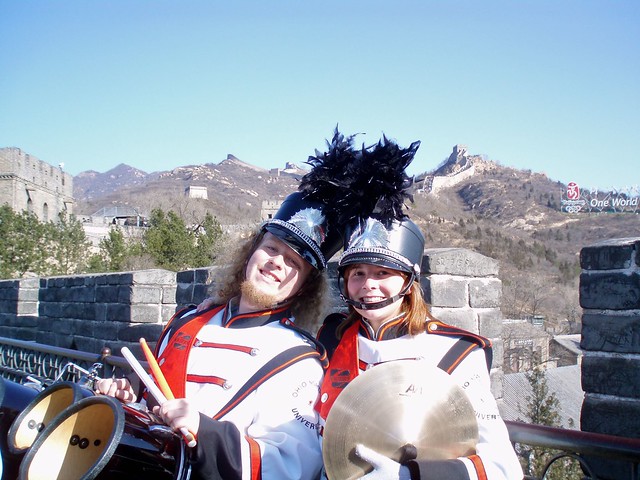 After returning to the city that night, we were free to explore Beijing for the evening. Some friends, armed with Lonely Planet guidebooks, decided they wanted to check out the city’s nightlife. They found a couple of promising bars with ridiculous-sounding names like Banana Spicy, along with a long list of westernized clubs where we could drink and dance the night away (the drinking being the key).

Eventually, a large group of about 20 of us was gathered outside our swanky Western hotel, business cards with spiky Chinese characters scribbled on them by friendly hotel staff firmly in hand to communicate to cab drivers where we wanted to be taken.

The first sign of trouble, however, came when two of the taxis in our group — including the one I was in — veered off in the opposite direction from the others, to be quickly swallowed up in the overwhelming Beijing traffic.

It was the beginning of an unforgettable night.

Seven of us were deposited somewhere in Beijing, on a rather large and quiet street that was clearly not where we had intended to end up. Our taxi drivers tore off after we paid them, and the only people in sight were standing about a block up the road outside of the only neon-lit building in the area.

I approached them, armed with the hotel business card and the name of the club we were trying to find, and used my woefully inadequate Chinese to try and ask where the hell we were. And by “woefully inadequate,” I mean I was only able to say hello, mumble the word for “where,” and then point helplessly at the business card.

If only the 10-week Chinese course I’d taken had taught me something other than the word for “manager” and how to hold a conversation about where I’m from. Nouns, for example, would have been helpful.

The confused Chinese men of course had no idea what I was saying, and just kept pointing at the building behind them, where a large sign announced the “Hi-Way Disco.”

Since it seemed like Banana Spicy was nowhere in sight, we decided to check out the Hi-Way Disco.

After paying a small cover charge and having our jackets whisked away into some back room, we made our way into what looked like a scene from a movie. Or a circus. Or a really trippy dream?

The club was packed with sweaty, young Chinese people dancing to bumping techno music. Scantily-clad bartenders were dousing the bar with vodka, setting it on fire, and then doing pole dances in between the flames. It was hazy, but we were able to pick out one of 4 or 5 DJs, who was randomly sporting an Ohio State sweatshirt as he spun the tracks.

“What. The. Fuck,” my friend Kevin said as we all stood in a corner, gaping.

And we weren’t the only ones. A handful of nearby Chinese people had ceased in their dancing to stare, too. Except, they were staring at us.

Feeling exceedingly awkward, we quickly made our way over to seats at the bar, where an overly-friendly bartender with not enough clothes on began to flirt with my boyfriend, Dave.

Dave and our friend Biff began trying to figure out how to order a gin and tonic from the flirty bar maid who spoke no English, while the other girls in our group — Lisa and Diana — starting scoping out the dance floor.

“What is that guy doing?” Lisa asked, pointing toward a skinny guy sporting a fedora and holding up a dry-erase board and a deck of cards.

“Well,” I said, taking a good look at his hat and the handful of cards grasped in a hand covered in a white, sparkly glove, “It appears that he’s doing magic tricks. Dressed like Michael Jackson.”

And so he was.

We eventually left Dave and Biff at the bar, who had been perplexed to receive matching fruity drinks with umbrellas in them after ordering what they thought were going to be gin and tonics. The flirty bartender was transfixed by Dave’s pipe, which he was showing her how to pack with sweet-smelling tobacco.

I, along with Lisa, Diana, Kevin and our seventh member, Chris, headed out to the dance floor, pushing through the sweaty crowd as we went. The techno beats were good, and we were hoping to make the best of the Hi-Way Disco.

But there was one problem: We had an odd number of people.

Lisa paired off with Kevin, and Diana with Chris, leaving me to awkwardly bounce by myself as the crowd pushed in around us, eyeing us all curiously. I have never felt so white in my entire life.

It was fun — for the first two minutes.

One song hadn’t even fully ended when I suddenly felt hands on my hips. I whipped around to face a tall, very drunk Chinese man who was looking at me with glazed-over eyes and a sneaky smile.

I tried to tell him I didn’t want to dance, but either he didn’t understand me, or he simply pretended that he didn’t. He began grinding all over my backside as I stood there, horrified.

My friends, of course, thought this was hilarious.

I tried. I really tried to “just go with it.” Even when Drunky McDrunkerson began grabbing my butt. Even when I could feel parts of him I didn’t want to feel pressing into the small of my back. Even when he began feeling up my inner thighs.

But, when he began kneading my stomach flab like bread dough, I’d had enough.

“Kevin!” I finally screeched, “Get this guy OFF ME.”

Kevin and Chris had a hard time getting the guy to go away. While they were trying to get in between him and me, the man kept a firm grasp on my wrist, and once or twice tried to pull me away.

He kept nodding in my direction, winking, and saying “Yes. Yes!”

“No! NO!” I kept responding. But still he held on.

Eventually, Kevin pried his fingers away and he and Chris made a wall around me in the form of a double bear hug. It was in this strange formation that we left the dance floor.

When we got back to the bar, Dave was showing the flirty bartender how to smoke the pipe, while Biff was recovering from an apparently traumatizing trip to the bathroom, in which a restroom attendant had tried to give him a back massage while he was peeing.

No, we definitely were NOT in Kansas anymore.

But, at the end of the night, all we could do was laugh at the absurdity of it all. Pyromaniac pole dancers… Michael Jackson-impersonating magicians… Creepy men wanting to feel up the white chicks (and Biff)…

It wasn’t exactly munchkins and wicked witches on yellow-brick roads, but it sure was going to make for some great stories the next day.

I always wonder how our night would have differed if we’d made it to any of the Western clubs as planned. Would they, too, have been strange and foreign? Would we have come away with similar stories to tell?

Do you have any crazy stories from nights out on the town in foreign countries? I want to hear about them!