Of Kumquat Trees and Death Wishes: Cycling in Hanoi

The warning alarms should have gone off in my head as soon as I was outfitted with a mountain bike and a sturdy helmet for what I had at first understood to be a nice leisurely bike ride in the Vietnamese countryside.

No, who am I kidding — the alarms should have started wildly blaring as soon as I heard “Hanoi” and “bike ride” in the same sentence.

And yet there I was on a busy Hanoi street, picking out a helmet and a sturdy mountain bike. 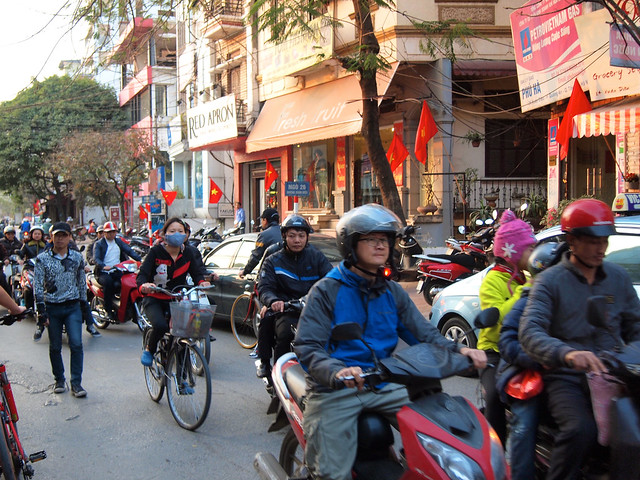 “We won't be riding in the city much,” our guide assured us. “Just a little bit, and then over a bridge down to the river flats.”

It sounded good in theory. As most crazy things do.

The traffic in Hanoi lives up to the stories you've heard about it — of a wall of buzzing motorbikes; of the fact that you are better off crossing the street with your eyes closed, hoping that the honking horns will find their way around you.

Simply LOOKING at the traffic made me nervous. And yet I soon found myself in the thick of it, half of me praying to God and the Buddha at each intersection that I would survive the ordeal, and the other half laughing absurdly at how crazy it was.

Cycling in Hanoi certainly is an experience.

To be fair to our Vietnam Velo guide, he was telling the truth when he said that the amount of riding we'd be doing in the city itself was minimal.

We had to cross 2 major streets, but then soon were riding across an old railroad bridge and carrying our bikes down to the river flats for some much less-trafficked trails. 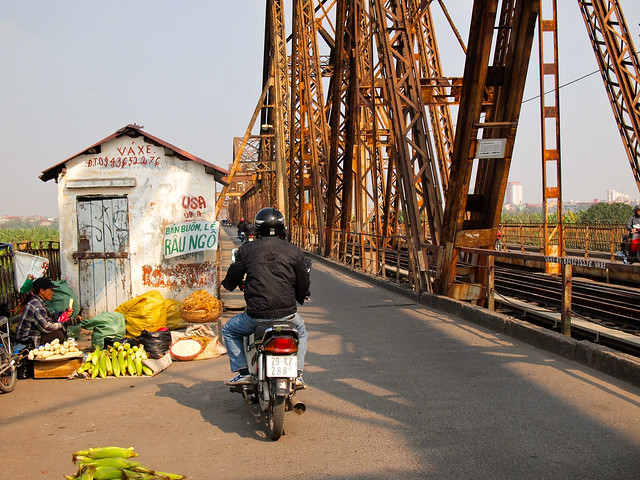 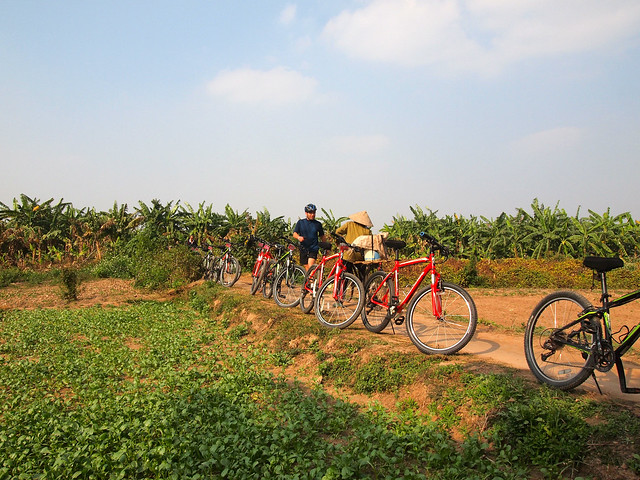 Down on the flats of the Red River, it was hard to believe that the honk-happy city of Hanoi was anywhere nearby.

As we rode on rutted paths through fields of crops and “forests” of banana trees, it was incredibly quiet and… well, rural. 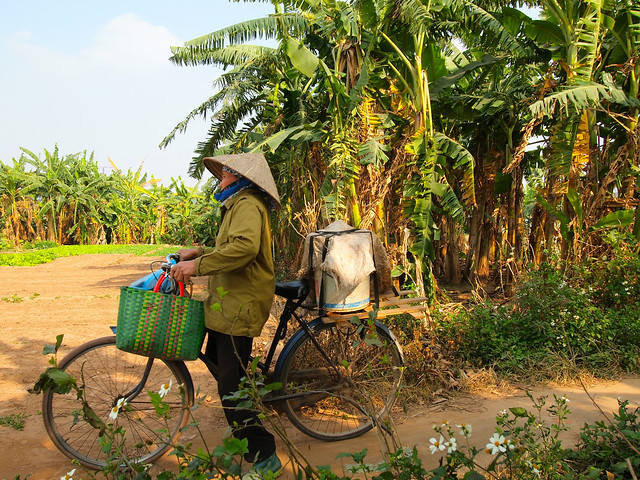 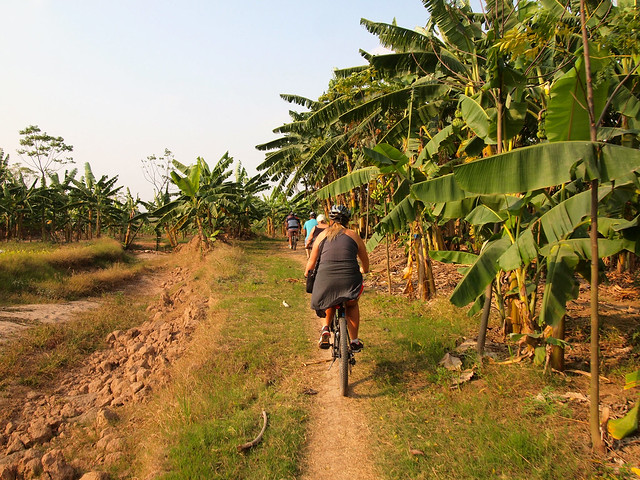 We stopped constantly along the way — to meet families who lived in the middle of their fields or (illegally) on the riverbanks in little shacks. 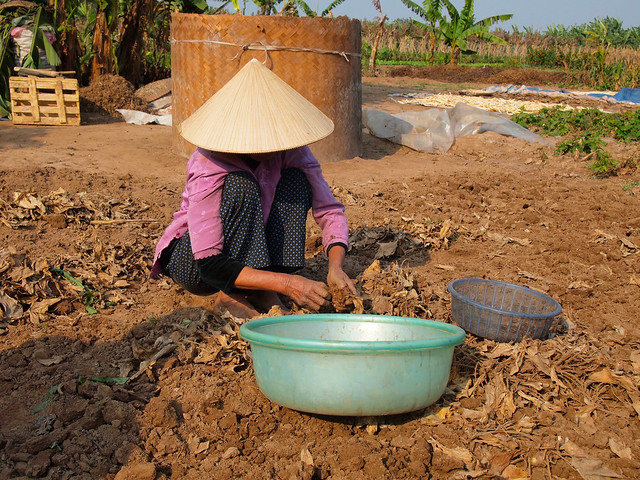 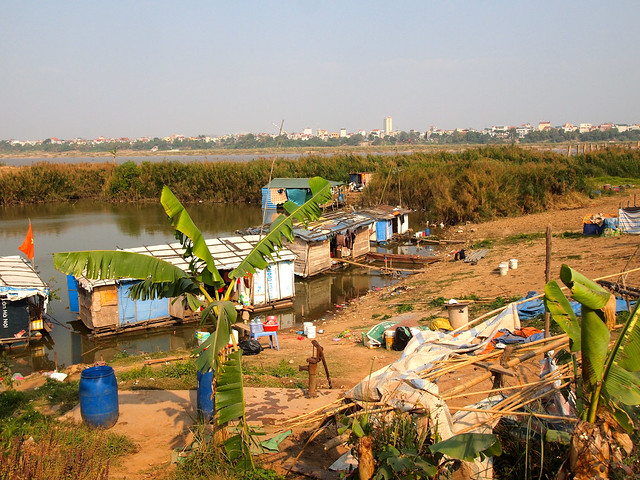 We visited farms that were selling peach blossoms and kumquat trees leading up to the Lunar New Year Celebration of Tet. Here in Vietnam, you buy a kumquat tree for Tet the same way that we North Americans buy pine trees for Christmas.

So, why the mountains bikes, you ask?

Well, they certainly weren't to help us through the Hanoi traffic. 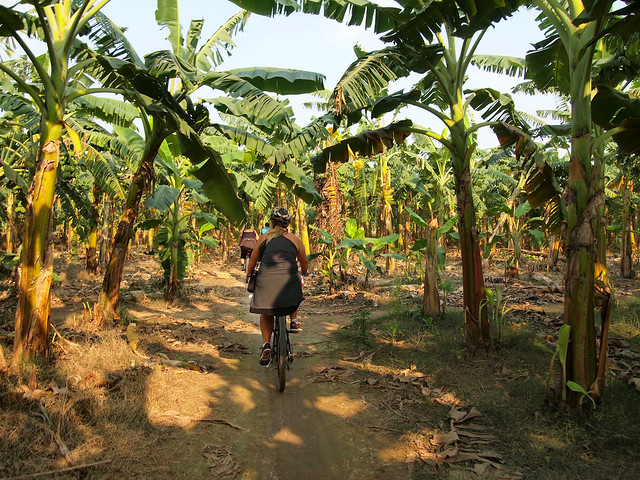 Even though this cycling tour was advertised as “easy,” the trails were actually anything but for most of our ride through the river flats. They were often narrow, rutted, sandy, and otherwise challenging. So much so that 4 people (out of a group of about 14) fell off their bikes, one hitting her helmeted head hard enough that we feared she had a mild concussion.

While the falls were unfortunate (and even a little scary), a bike tour like this was the last thing I expected to experience in a city of 6.5 million. 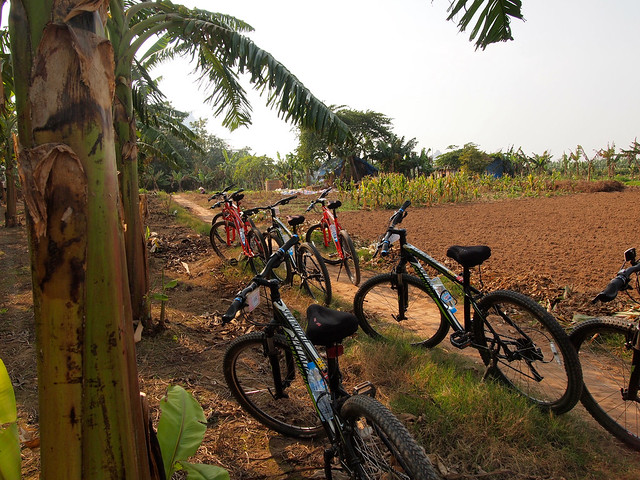 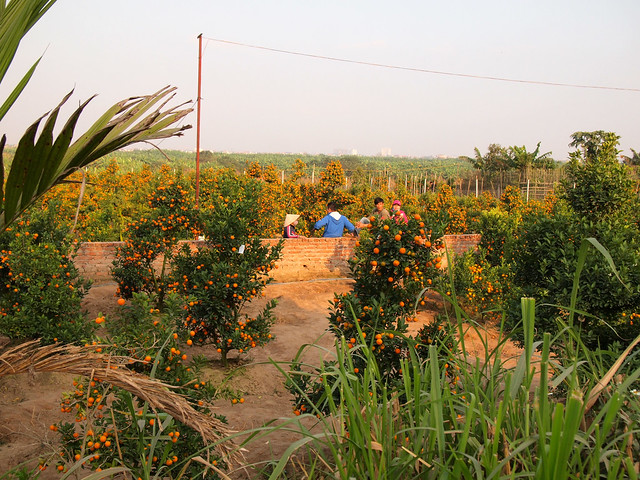 I would do it all again — including riding through that insane traffic!

After all, what is the point of traveling halfway around the world if you're not up for a little adventure?

Go on a bike tour in Hanoi

DO THIS TOUR: I went on this tour as part of a larger group tour of Vietnam, but it can be booked on its own through Urban Adventures. The tour is called Village Discovery by Bike. The tour was very professional, and we had not only a guide with us, but also a bike mechanic.

You should have some cycling experience for this tour, as you do ride briefly through Hanoi traffic, and on uneven trails once you get out into the countryside.

Would you be crazy enough to go on a bike tour in Hanoi, of all places?

*Note: I visited Hanoi as part of a complimentary tour of Vietnam and Cambodia with Intrepid Travel. I paid for this bike tour on my own, however.

43 Comments on “Of Kumquat Trees and Death Wishes: Cycling in Hanoi”