In Search of Seals: Hiking to Sinclair Head in Wellington

Home » New Zealand » In Search of Seals: Hiking to Sinclair Head in Wellington

The morning was clear, crisp. A cool breeze whipped through Wellington's downtown streets – light for a city nicknamed “Windy Welly.”

Deciding to take advantage of the sun and clear skies, my friend Andrea and I decided that this would be the day we would take the bus to Island Bay and hike out to the seal colony at Sinclair Head.

From May to October, Sinclair Head is home to male fur seals who were unsuccessful in finding mates in the South Island seal colonies – bachelors, if you will. These single seals can be found lolling about in large numbers just a few kilometers from downtown Wellington. And we wanted to find them.

Starting the journey to Sinclair Head

On weekdays, you can take a bus to Owhiro Bay, which is close to the beginning of the coastal track that will lead you to Sinclair Head. But, since Andrea and I decided to make our trek on a Sunday, the only option was to take the bus to nearby Island Bay, adding an extra 5 or 6 kilometers onto our round-trip hike.

The bus dropped us off right near the beach at Island Bay, where a few families were out playing in the sand (though not the water, since it was frigid), and a few fishermen were trying their luck in the rough surf.

We started our easy hike along the coast, making plenty of stops to capture the scene at Island Bay. These rusty-colored rocks continue all along the shore, darkening and eventually giving the “Red Rocks Coastal Walk” its name. 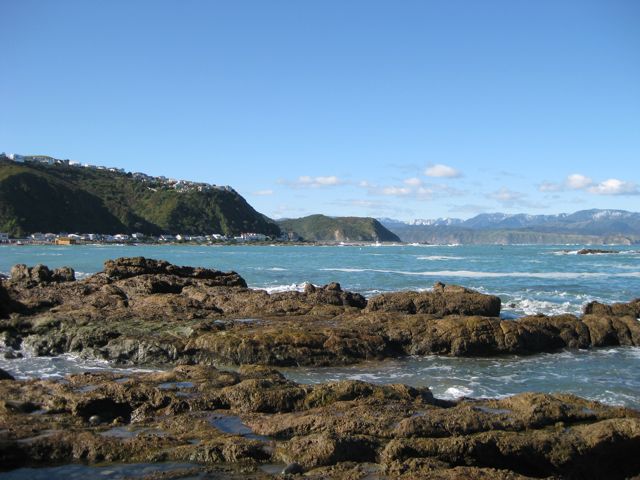 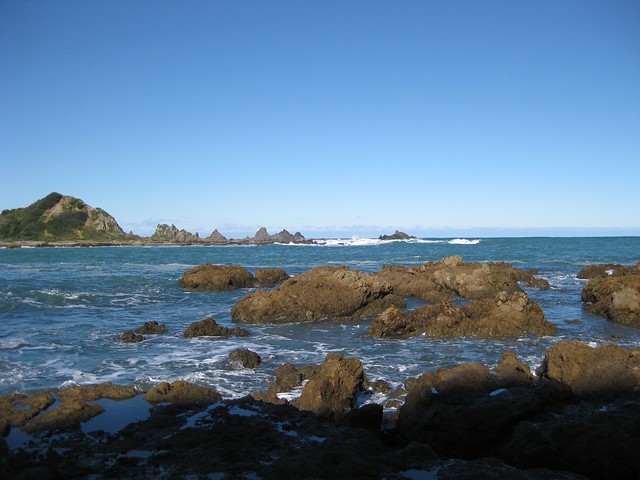 We soon rounded a bend, and found ourselves in Owhiro Bay – where we would have began if the Owhiro Bay bus had been running that day. Owhiro Bay is a quaint little community with a rounded beach and towering hills on either side.

Looking out across the Cook Strait on a clear day like this, the snow-covered peaks of the Southern Alps were clearly visible in the distance. I hadn't realized that the South Island was so close.

Andrea and I stayed in Owhiro Bay for quite a while, sitting on the craggy rocks and watching the blue-green water roll and crash into the bay.

Eventually, however, it was time to continue on. We made the curving trek around Owhiro Bay, and entered the Te Kopahou Reserve, which is where the Red Rocks track begins. 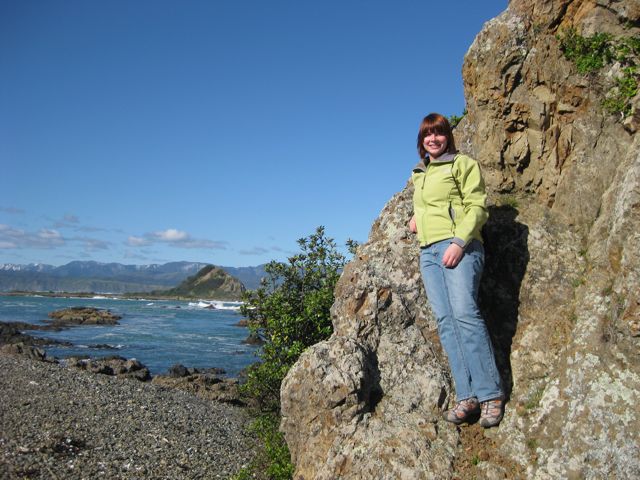 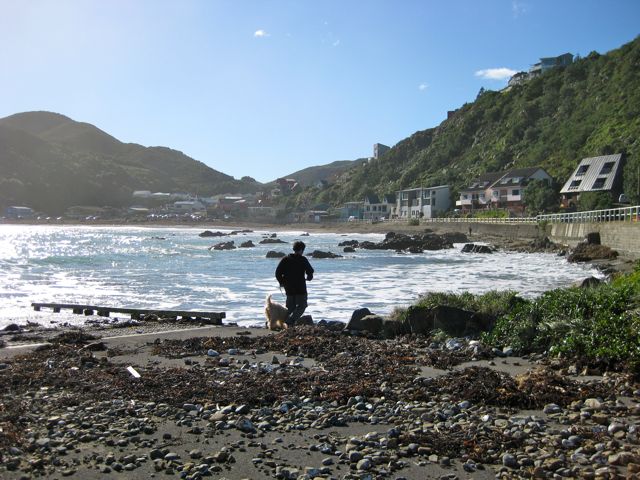 The hike along the coast is not a difficult one – it is mostly flat and over sand or rocks. There were very few spots where you had to hop over a stream or climb over anything taller than knee-height. It is not a short hike, however; you want to allow at least half a day for the entire return trip, especially if you move slow like we did, stopping every 100 feet or so to snap another photo.

Eventually we reached a rock formation known as “Devil's Gate” – two tall protruding bits of rock that marks the entrance to Sinclair Head.

We could smell the seals before we could see them. And, in fact, quite a few were lolling about before we even passed through Devil's Gate.

Passing through Devil's Gate, we were assaulted. Not by the seals themselves, but by the smell of them. They were everywhere. Nearly every rock had a dark, lazy figure draped over it, soaking up the late afternoon sun.

Some of them were so still and sleepy-looking that Andrea was convinced the first few we saw were dead. 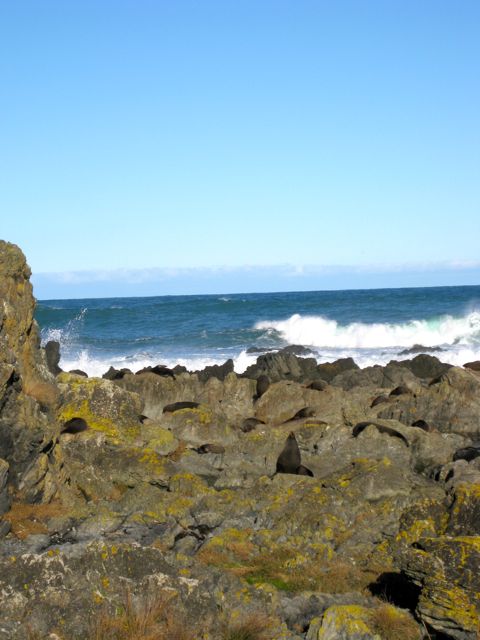 Here at Sinclair Head, the view of the Southern Alps across the Cook Strait was even better. We even spotted the Interislander Ferry (the vessel that carries passengers from Wellington across the strait to Picton a few times each day) making a return to the North Island. Really, though, Sinclair Head at this time of year is all about the seals. Since these are all bachelors and there are no females or pups to protect, you can easily (and fairly safely) just take a seat on the rocky shore near a seal and not worry too much about it.

The seals will protest if you get too close (as Andrea and I discovered), but they move so slowly and awkwardly over these rocks that we were pretty confident that we would be able to win in a footrace. Just don't get between them and the water so they don't feel too threatened. 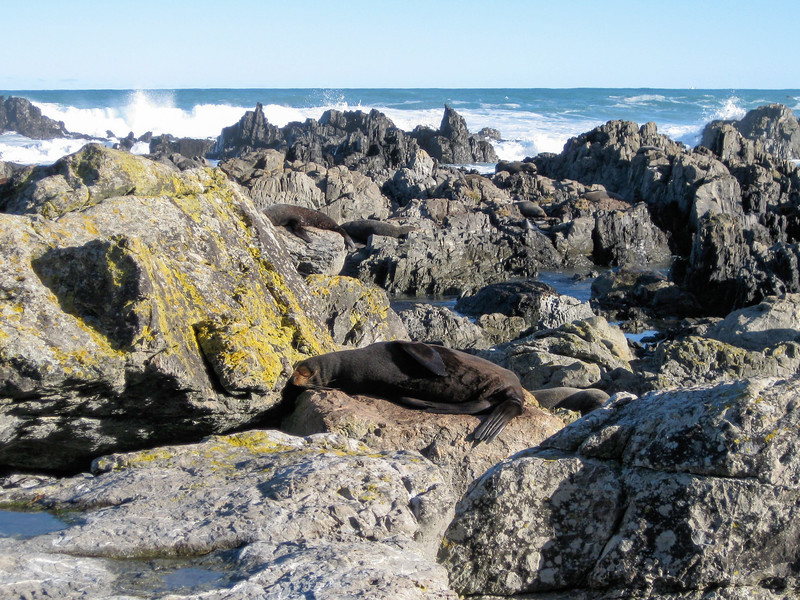 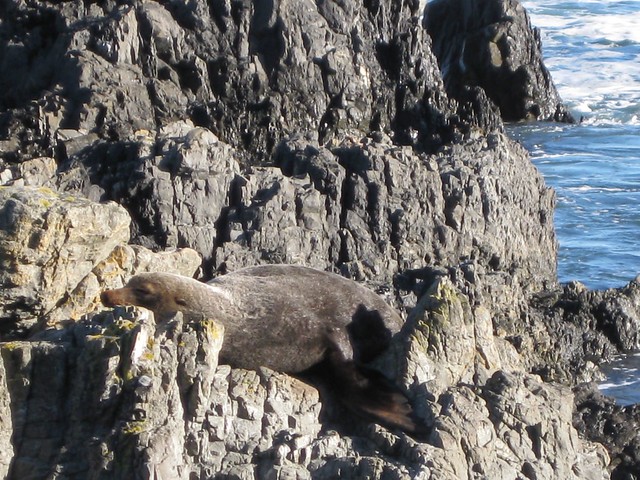 After we'd had our fill of lazy seals (and once we could no longer stand the stench), Andrea and I headed back the way we'd come. The walk back to Island Bay, in the shadow of the coastal hills and cliffs, was a chilly one. The wind had picked up, and this was still winter time in New Zealand. We made very few stops on the return journey, instead hurrying along to try and beat the sunset.

We returned to Island Bay with daylight to spare, and congratulated ourselves on a successful hike. We had covered roughly 11 kilometers in about 4 hours, with many stops. Not too shabby, we thought. It was definitely a fun, interesting, and beautiful way to spend a Sunday afternoon.

And the best part? All it cost us was our bus fare. 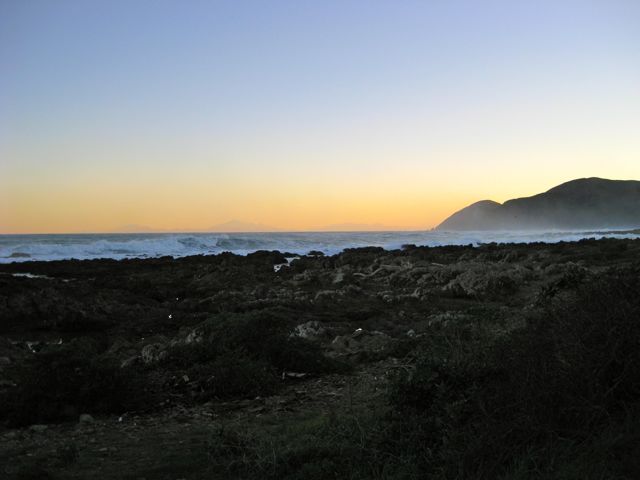 Want to hike out to the Sinclair Head seal colony yourself? Here's what you need to know:

When to go: The bachelor seals haul out here during the winter months in Wellington – usually May-October.

How to get there: Take the bus to Owhiro Bay, where the Red Rocks Track begins at Te Kopahou Reserve. (If the bus isn't running to Owhiro Bay, you can start at Island Bay, too, and just walk a bit further.)

How to find the seals: Once you're on the Red Rocks Track, simply follow it. It will take you straight to the seal colony, and you'll smell the seals before you see them.

How long does it take? We hiked from Island Bay to Sinclair Head and back in a bit over 4 hours.

Is this a hike you'd want to try in Wellington?

13 Comments on “In Search of Seals: Hiking to Sinclair Head in Wellington”