Tips for Going to the Canadian Tulip Festival in Ottawa

Each May for more than half a century, the city of Ottawa has come to life with hundreds of thousands of colorful tulips. Canada's capital celebrates the Canadian Tulip Festival for 3 weeks each year, drawing thousands of international visitors who want to see the blooms and enjoy springtime in Ottawa.

I myself was intrigued by this festival when I first read about it — a city decked out in tulips of all shapes and colors? What could possibly be better for this photography lover? 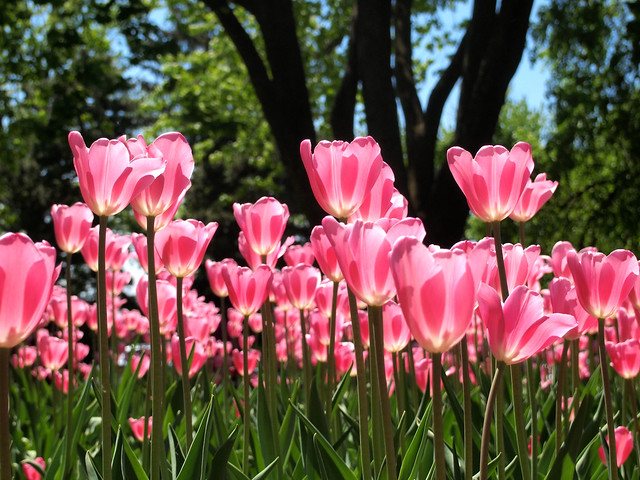 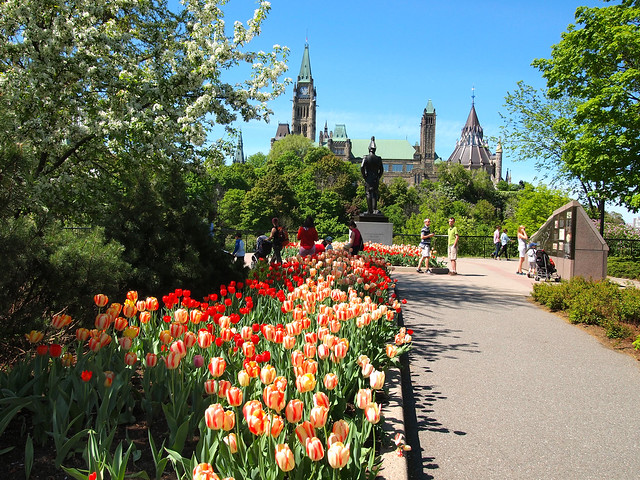 But the more I learned about the festival, the more interesting it became.

Ottawa doesn't just plant hundreds of thousands of tulips each year for the fun of it; there's actually some fascinating history behind the tradition. 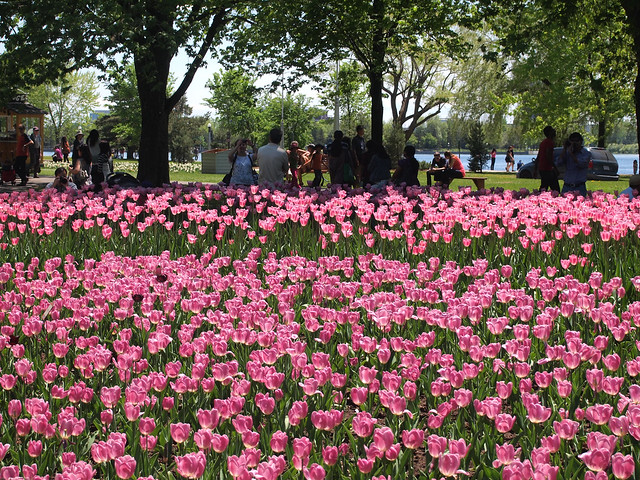 During WWII, after the Nazis invaded the Netherlands in 1940, the Dutch royal family fled their homeland to rule in exile from elsewhere. Queen Wilhelmina took up temporary residence in the United Kingdom, while Princess Juliana (along with daughters Princess Beatrix and Princess Irene) crossed the Atlantic and eventually settled in Ottawa.

While living in exile in Ottawa, Princess Juliana gave birth to Princess Margriet in January 1943. For the birth, a wing of Ottawa Civic Hospital was actually de-territorialized so that the new princess could still remain fully Dutch.

When the war ended, Queen Wilhelmina and Princess Juliana returned home to the Netherlands. In thanks for what Ottawa had done for her and her daughter (and in thanks to the Canadian solders who had helped liberate the Netherlands), Princess Juliana sent 100,000 tulip bulbs to Canada's capital. The next year, she sent 20,500 more and requested that they be planted around Ottawa Civic Hospital. This annual gift of tulips continued for decades. 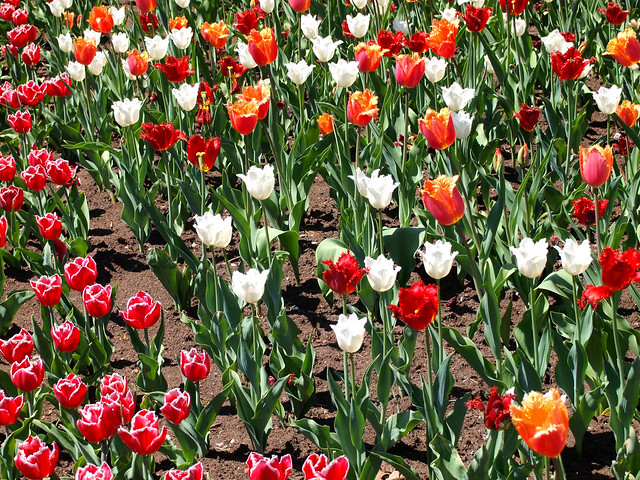 Princess Juliana's tulips drew new interest to Ottawa in the springtime, and in 1953 the Canadian Tulip Festival was officially born. Today, over 1 million bulbs bloom annually along the “Tulip Route,” and roughly 500,000 visitors flock to Ottawa each year to see them.

The Canadian Tulip Festival isn't JUST about the flowers, of course. Throughout the 18-day festival, there are musical performances, races, fireworks displays, parades, and more.

But, the tulips are, of course, the main draw.

Where to see tulips in Ottawa

Want to see the best tulip displays in Ottawa? Here are the best spots in the city to see the colorful blooms:

If you want to see Ottawa's best tulip displays and don't mind crowds, the dozens of tulip beds in Commissioners Park along Dows Lake are the place to go. Each year roughly 300,000 bulbs of all colors and varieties are planted in these beds alone. 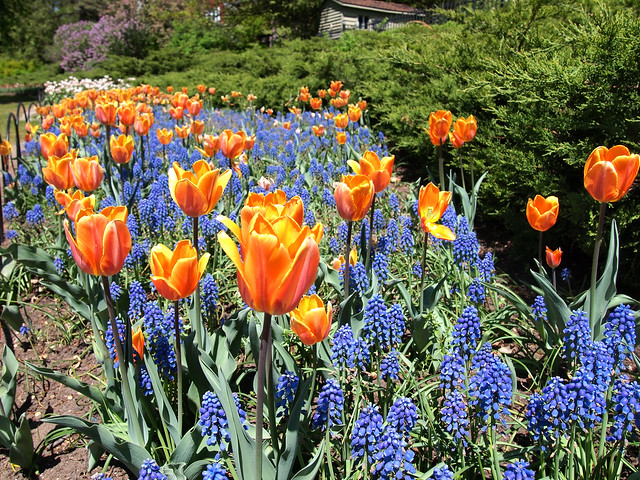 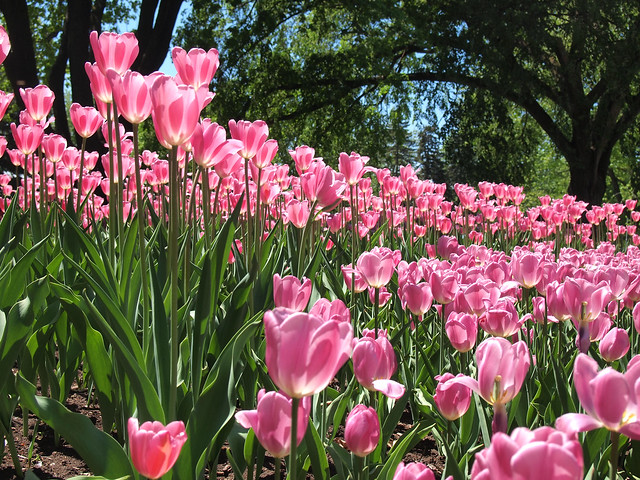 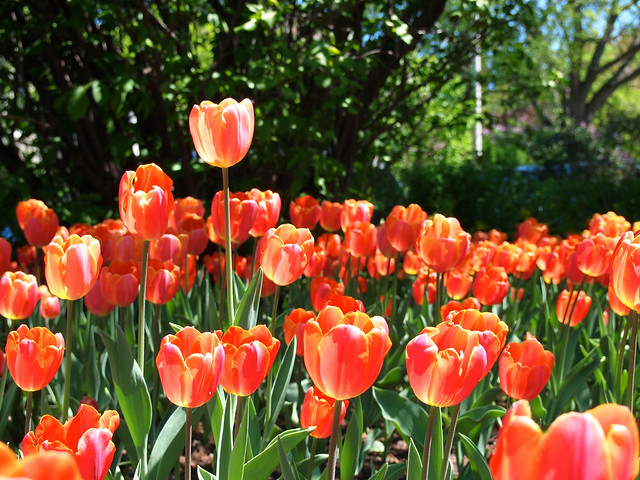 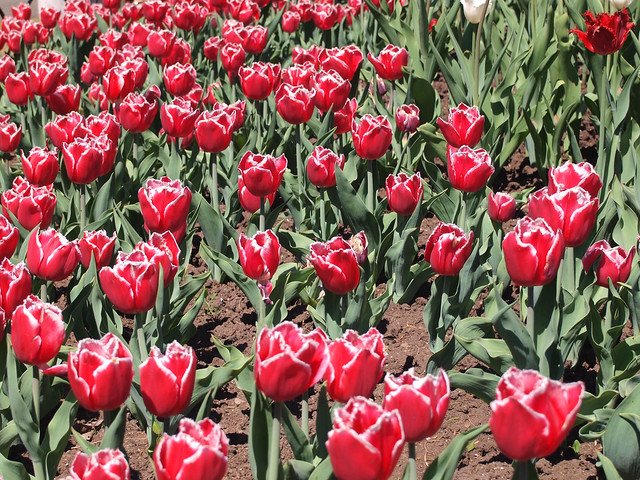 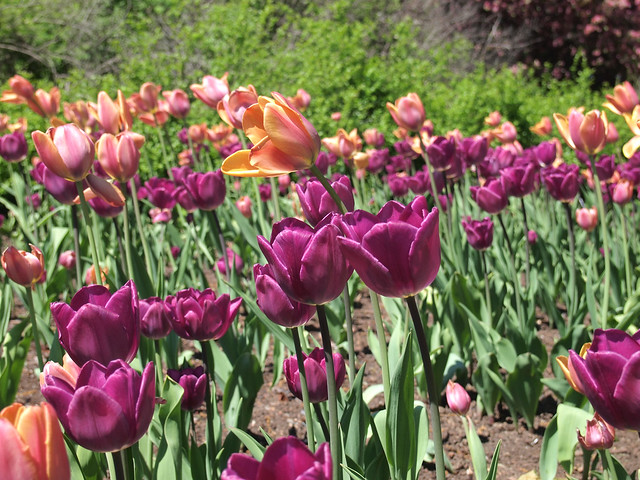 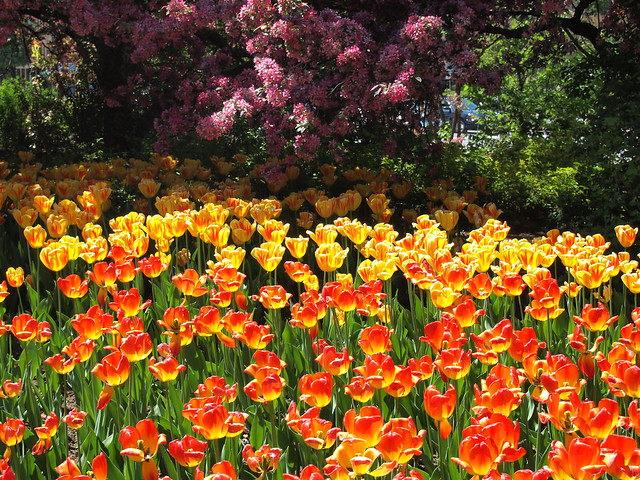 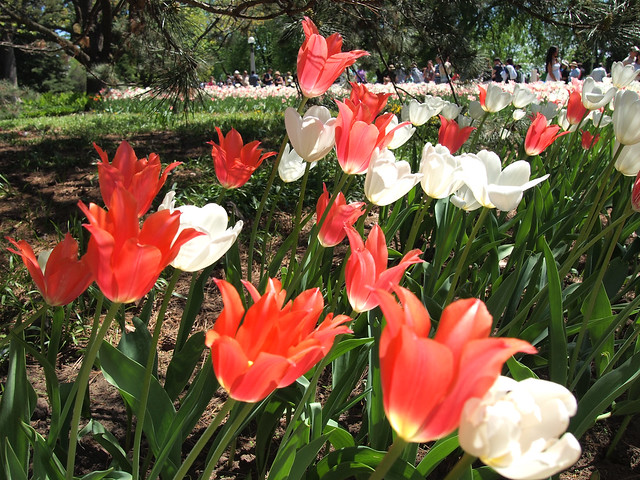 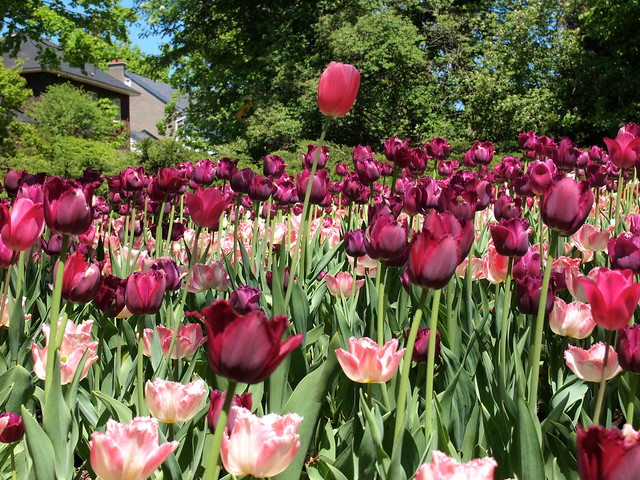 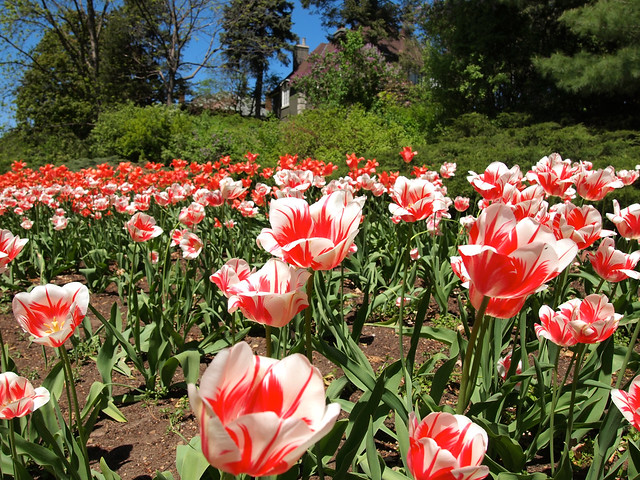 Getting there: You can drive to Dows Lake from anywhere in Ottawa, but I chose instead to rent a bike downtown and ride to the lake along the Rideau Canal. There are tulips planted along the canal, too, and the ride is gorgeous on a sunny spring afternoon.

This park, which overlooks the Ottawa River and Parliament Hill, is another great spot to go tulip-spotting in Ottawa. With less crowds but lots of green space, great tulip photo ops abound. And bonus — you can also get the Parliament buildings and the pretty Notre Dame Cathedral in the background of these shots. 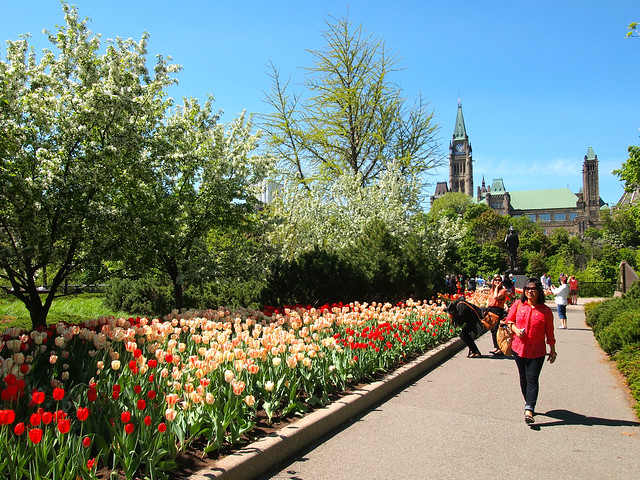 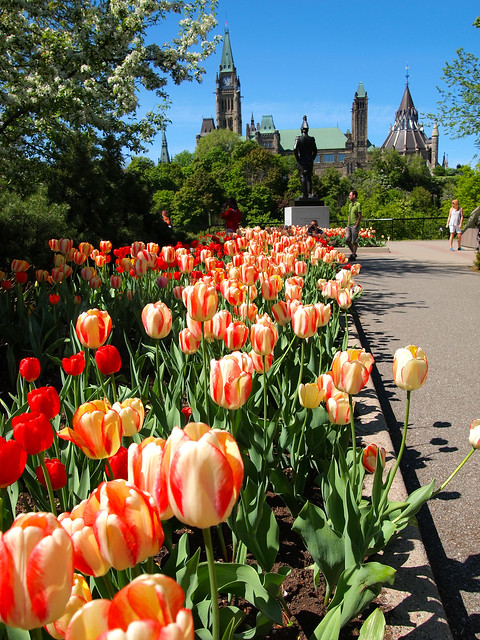 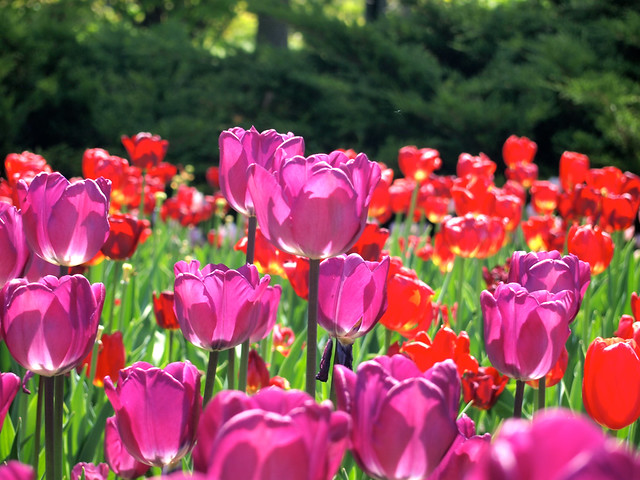 Getting there: Because this park is extremely central, I merely walked there from my hotel; no car or bike necessary!

There are, of course, tulips planted all over the city and not just in designated parks. You don't necessarily have to go to one of the “main” sites to see the colorful blooms. Some of my favorite tulip shots were snapped as I was just strolling around the city.

You can visit the Tulip Festival site to learn about more spots to spot tulips around Ottawa.

Where to stay in Ottawa

If you're headed to Ottawa for the Canadian Tulip Festival, here are some accommodation options to check out:

And check out these tours in Ottawa to make your trip even better:

Who would like to go to the Canadian Tulip Festival? 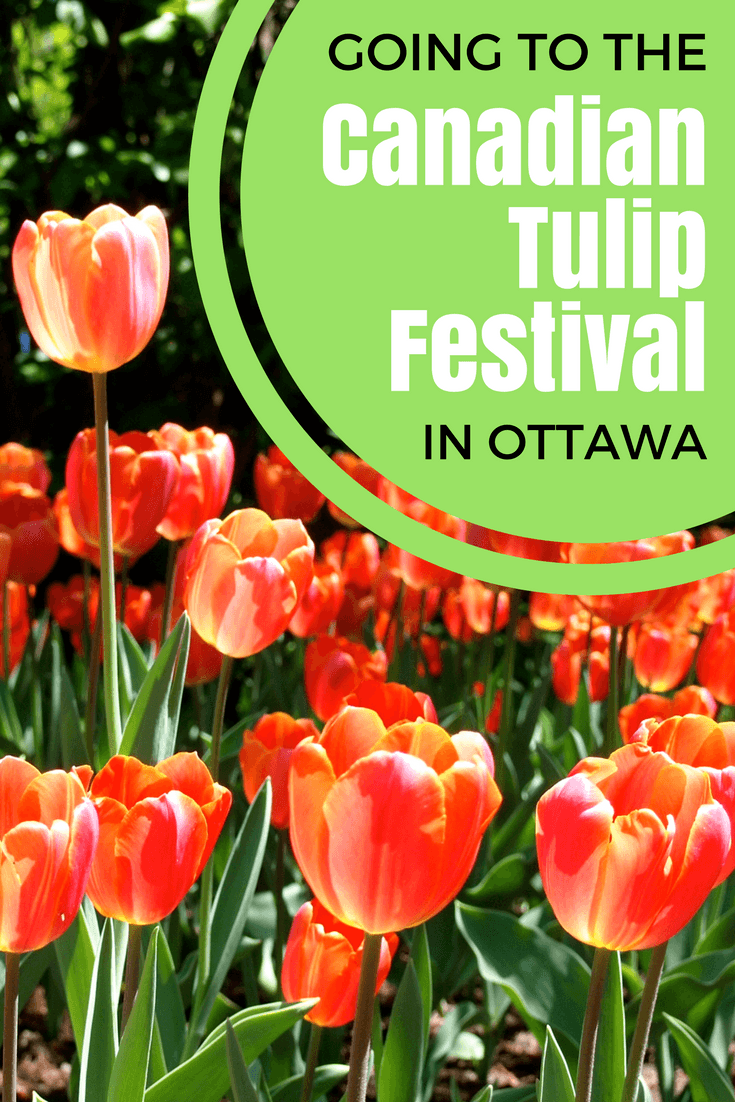 *Note: My visit to Ottawa has been sponsored by Ottawa Tourism and the Fairmont Chateau Laurier. As always, though, all opinions are my own.