Feasting and Fun at Hobbiton: The Evening Banquet Tour

I was bouncing – yes, literally, physically bouncing – in my seat as our big green Hobbiton bus pulled up to the entrance to the former movie set.

Elliot found my enthusiasm amusing; after all, this wasn't my first visit to the Shire. In fact, it wasn't even my second! This would mark my third trip to Hobbiton (second since it was rebuilt to be permanent). But this would be my first time joining the site's Evening Banquet Tour. 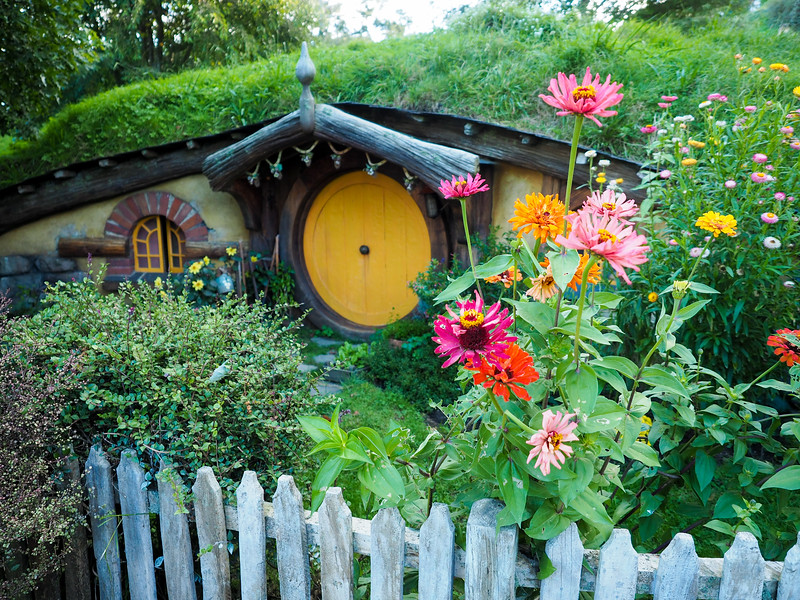 The Evening Banquet Tour at Hobbiton is essentially a fantasy-lover's ultimate date night. It starts off with a tour around the Hobbiton movie set, proceeds into the Green Dragon pub for drinks, moves on to a hobbit-inspired two-course feast, and concludes with a nighttime walk back through the set by lantern light.

To say that I was excited to try this new-ish offering would be an understatement. Tickets for this experience were literally the first thing I booked for this trip to New Zealand. 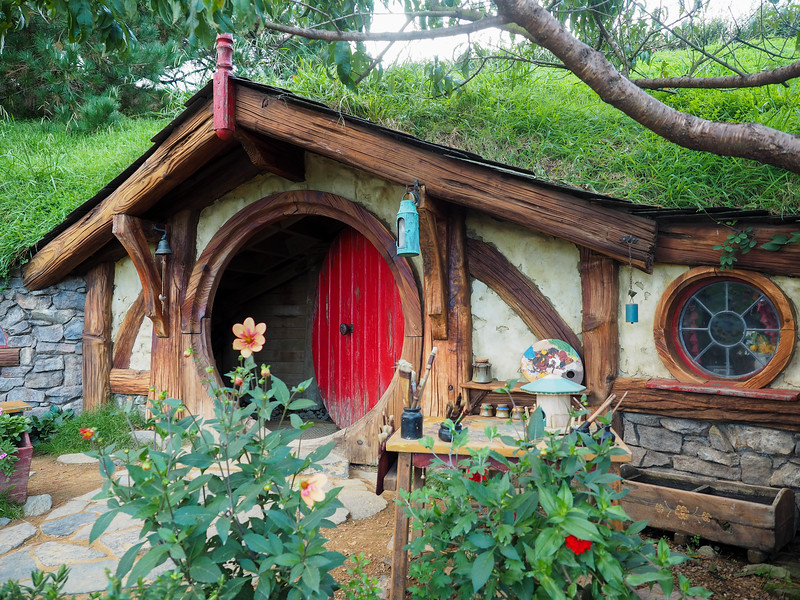 So what is the Evening Banquet Tour at Hobbiton like? Since I was curious myself before dropping a not-insubstantial amount of money on the experience, I decided I'd give you a little glimpse into what you can expect.

Once our small group got off the bus, our guide, Mike, promptly led us through Gandalf's Cutting and into the heart of Hobbiton.

The sun was low in the sky and behind some clouds, casting Hobbiton in a soft pre-twilight light. 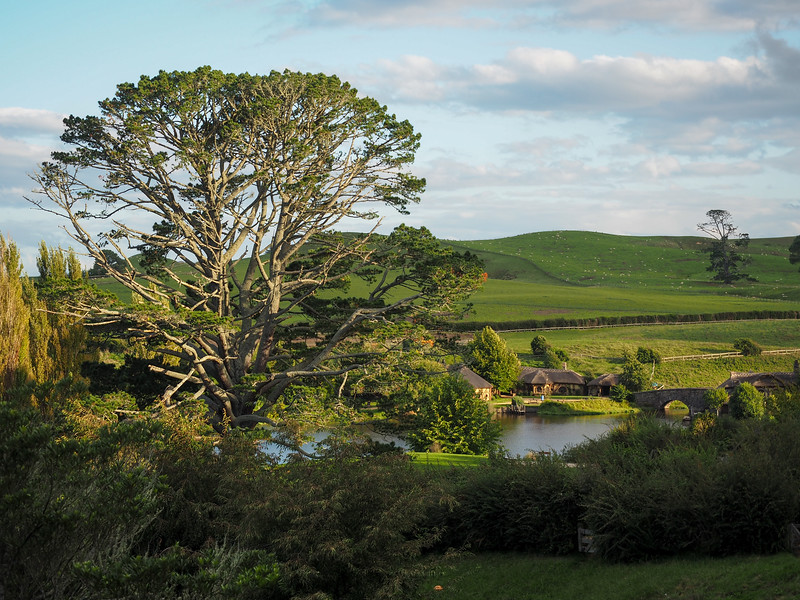 I once again marveled at all the details, from the laundry hanging on the line to the decorated mailboxes (each once gives a hint at what the hobbit living in a particular hole does for work). The grounds were lush and filled with flowers and vegetables; there's even a flourishing herb garden that the chefs at the Green Dragon Inn actually use. 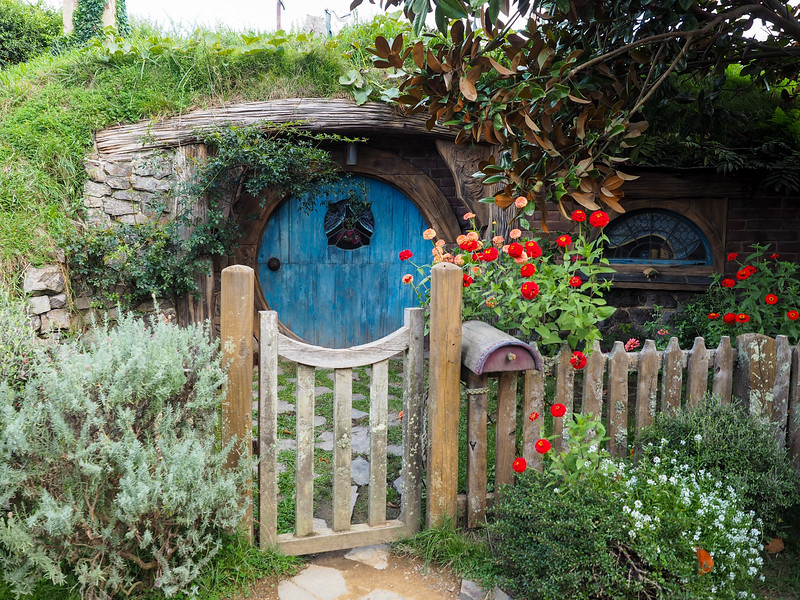 Our tour took us from the entrance of the set all the way up to Bag End (Bilbo and Frodo's house) and down to the Party Tree and Samwise Gamgee's home. We stopped for photos inside a hobbit door, and to hear several stories about filming from our guide. 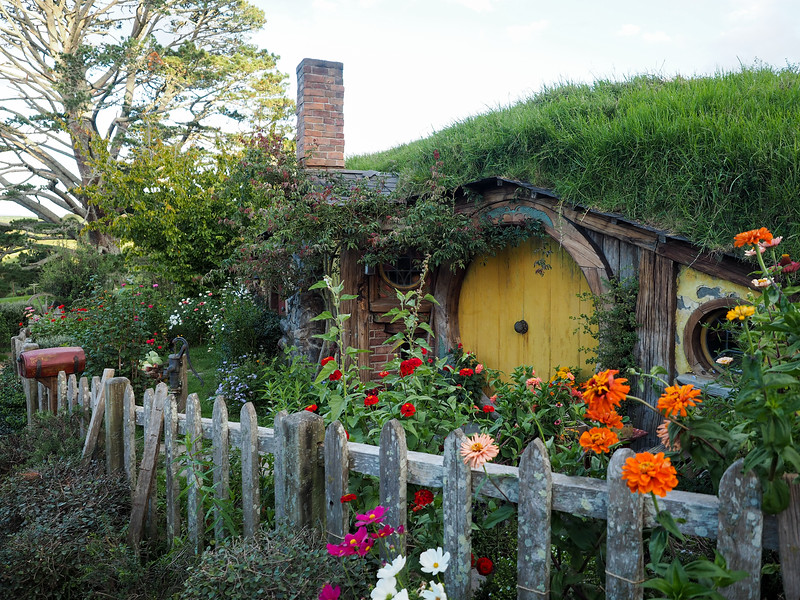 This is bliss for a Lord of the Rings fan like me, but even non-fans can appreciate just how gosh darn ADORABLE this place is.

To read more about visiting Hobbiton, check out this post.

Step 2: Drinks at the Green Dragon

After our tour of Hobbiton (which lasted about an hour), we made our way over a bridge to the Green Dragon, where everyone enjoyed a complimentary (and Shire-inspired) drink before dinner. They offer two ales, a cider, and a ginger beer for those of us who don't really do alcohol. 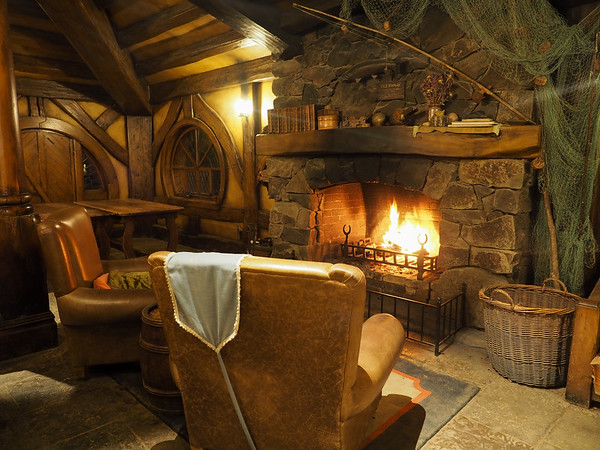 What really sets this tour apart from the regular daytime tour of Hobbiton is of course the actual banquet dinner. Our guides revealed the dining room in a bit of fanfare, and then we piled around tables laden with food.

And I do mean laden! There was beef stew, sausages, salmon, chicken (multiple full chickens, in fact), roasted squash, mashed kumara, and lots of other veggies. 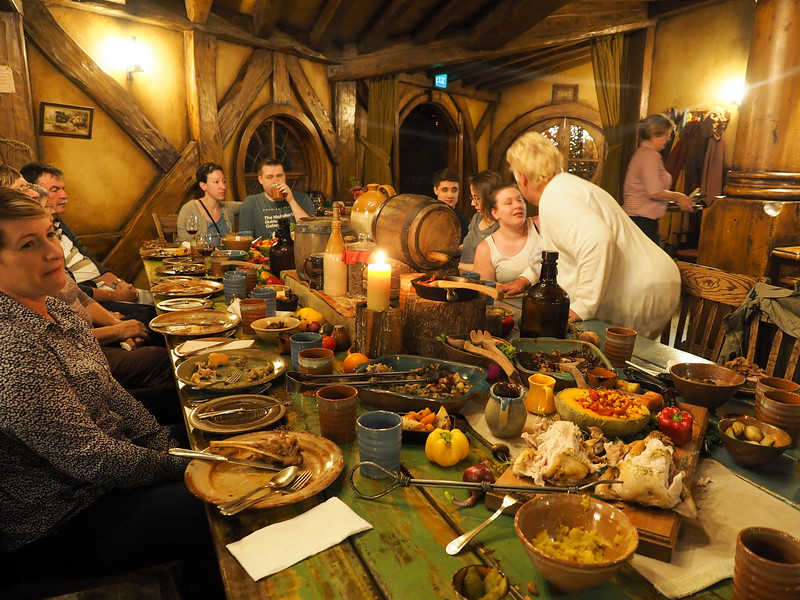 And after we stuffed ourselves with multiple helpings, they brought out a dessert board piled high with pies and tarts and pavlova. 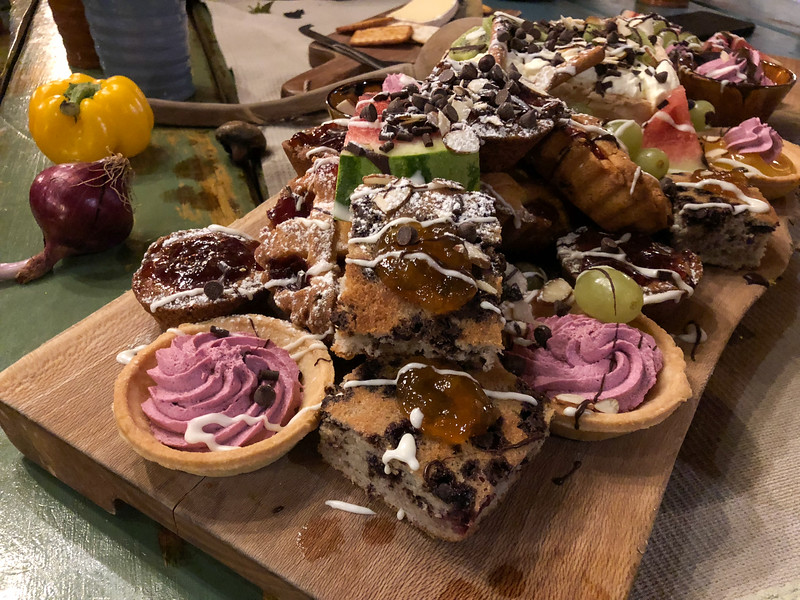 Any hobbit would have been thoroughly satisfied, I think.

After we rolled ourselves out of the dining room, we picked up some electric lanterns and began making our way back through the Hobbiton movie set after dark.

Little paper lanterns were lit in the trees, and many of the hobbit holes were illuminated outside, making for a rather twinkly scene. 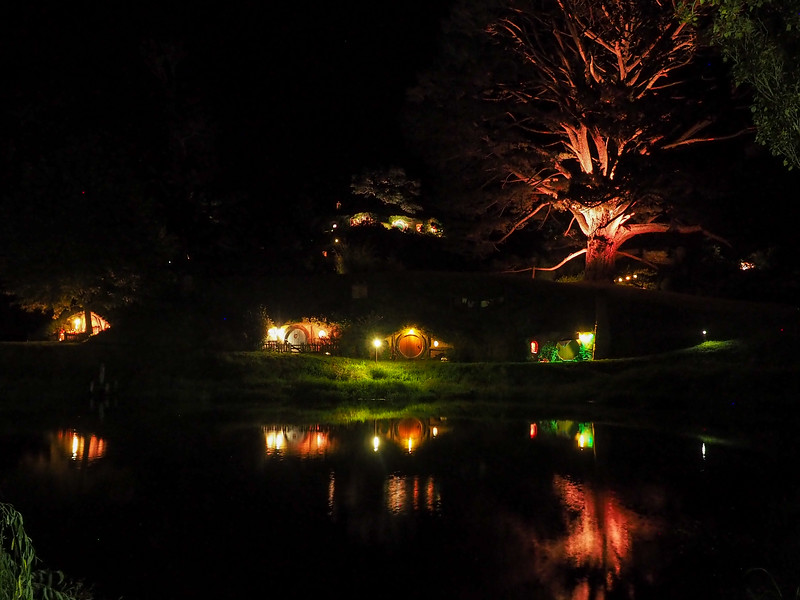 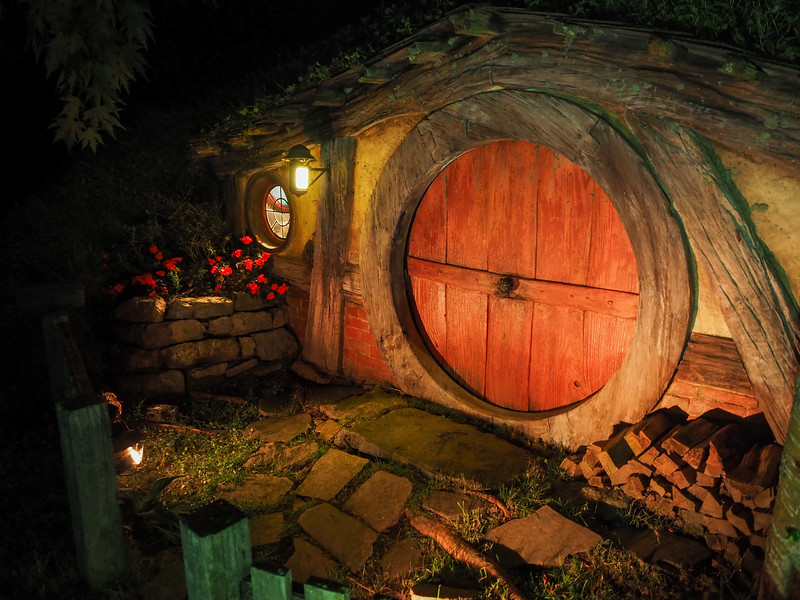 We stopped at the Party Field for a quick lamplit frolic, and had time for photos in front of one of the prettiest illuminated hobbit holes.

All told, our experience at the Hobbiton Evening Banquet Tour lasted just over 4 hours, and included everything you could possibly want from a visit to The Shire. Even though this wasn't my first trip to Hobbiton, it was no less magical this time around.

I 100% think it was worth it and would do it all over again!

What: The Hobbiton Evening Banquet Tour

Where: The Hobbiton Movie Set, just outside of Matamata, New Zealand

When: Wednesday and Sunday evenings year-round; times vary depending on season. In summer, they sometimes add additional evenings.

How much: The Evening Banquet Tour runs $190 NZD per adult (roughly $137 USD). It's not a cheap night out, but considering you get a good dinner and a tour of the set, I think it's pretty good value – especially if you're a fan!

Do I need to book ahead? YES. These tours/dinners are limited to less than 50 people, and they do sell out – sometimes well in advance. 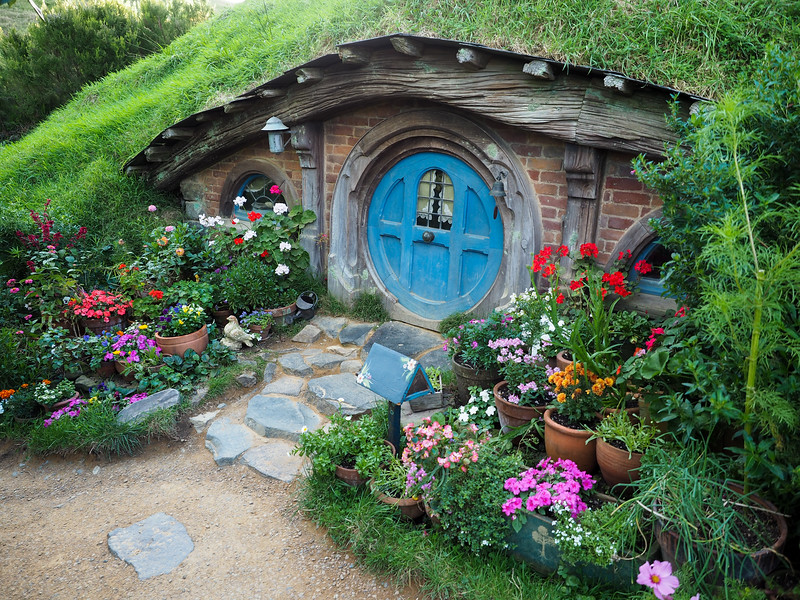 Banquet Tour not quite right for you? Here are some other Hobbiton tours you can check out:

READ NEXT: 5 Middle-Earth Locations You Can Visit in Real Life

Is this something you'd like to do in New Zealand? 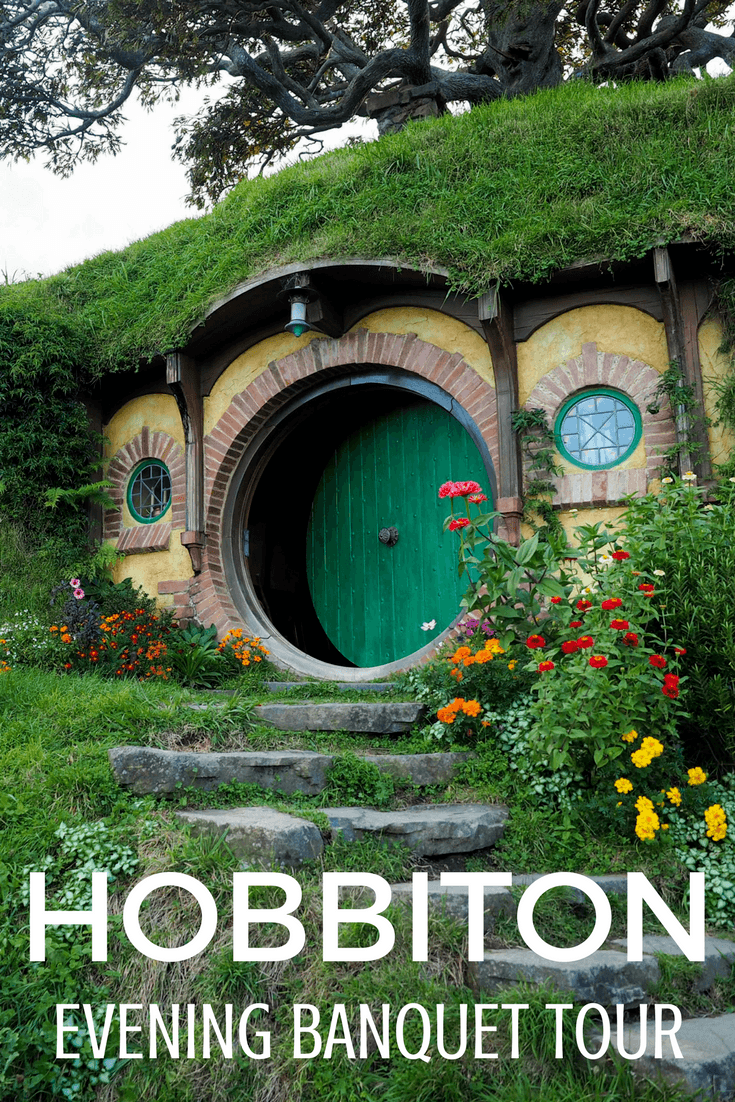 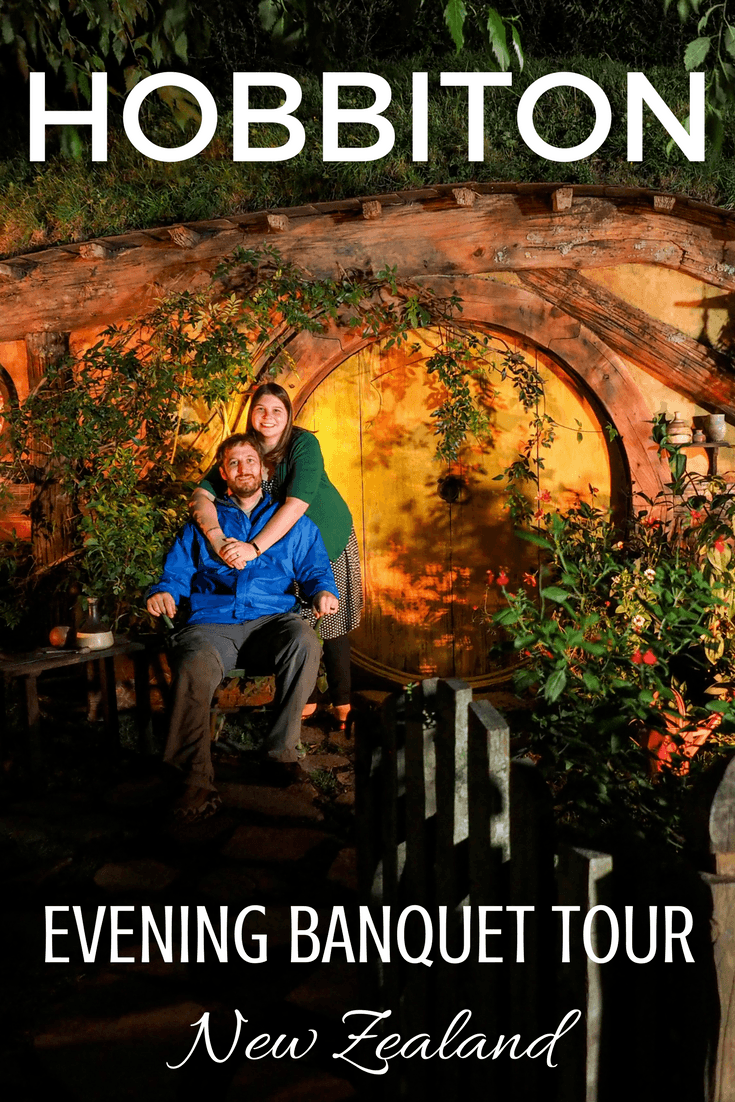 46 Comments on “Feasting and Fun at Hobbiton: The Evening Banquet Tour”