The Greek Islands: What to Do on Ios in the Shoulder Season

Home » Europe » Greece » The Greek Islands: What to Do on Ios in the Shoulder Season

The Greek island of Ios is a bit of a strange one. The word I would use to describe how it looks would be “sparse”; perhaps even “rural.” And yet Ios is known as one of the major party islands in the Cyclades, right up there with Mykonos. Why is this?

Well, Ios became popular with backpackers and other vagabonding types a few decades ago — back when it was acceptable to party all night in the Chora and then crash in a sleeping bag on the beach. Today, the Chora is still full of restaurants and boutiques and discotheques that backpackers flock to in the summer months. They don't sleep on the beach anymore, but tourism still remains a huge fixture on the island of Ios.

I, however, experienced a much different island. 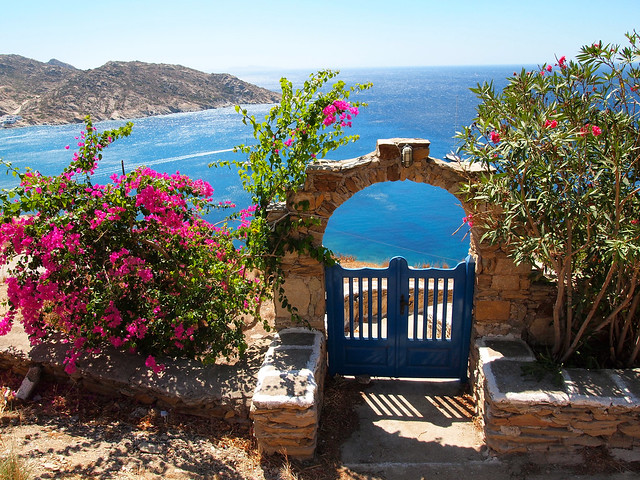 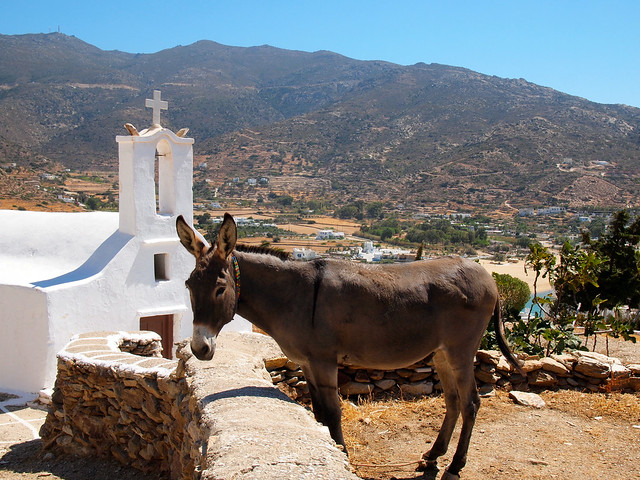 But the time I arrived on Ios a little more than a week into September, the partying backpackers had all gone. The discos were shut; the boutiques were all having end-of-season sales; and I got to experience the quieter side of the island. And you know what? It was pretty awesome. 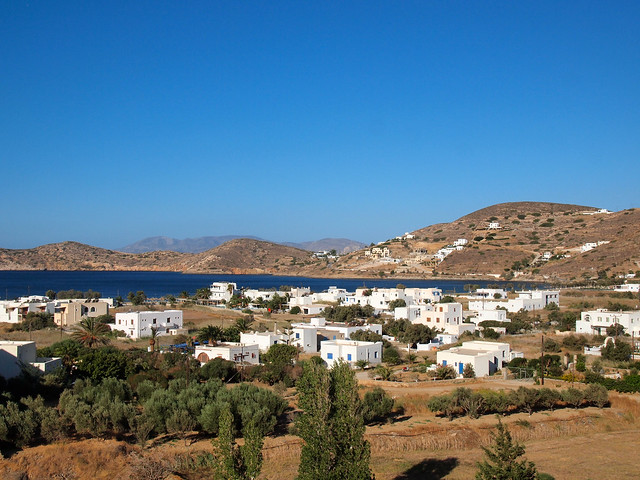 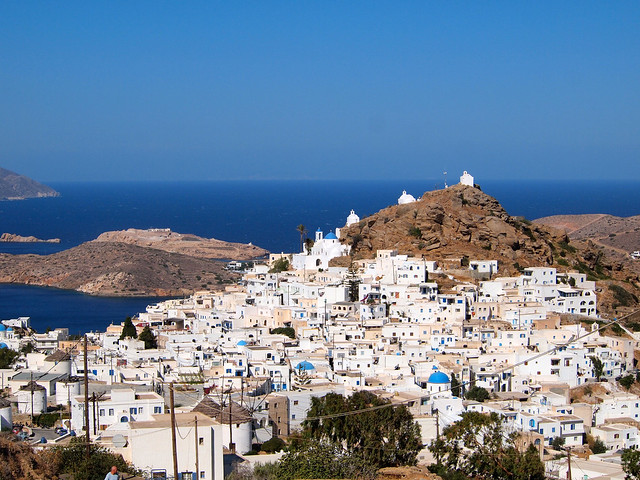 Things to do on Ios

If you find yourself on Ios during the shoulder season (which is definitely when I would suggest going), here are a few things you'll definitely want to do:

Wander around the Chora

The main town on Ios is simply called “The Chora” (or, “The Town”). You'll notice that there are “Choras” on many of the Greek Islands. The one on Ios is similar to most of the others — it has narrow, twisting streets, and plenty of white-washed buildings and churches.

Being on the island at the beginning of the off-season meant that my Intrepid Travel group essentially had the entire town to ourselves to explore. We visited some stores to shop their end-of-season sales, had a couple of Greek coffees, and cuddled with some attention-seeking Greek kitties. It was a chilled-out version of Ios — and one that I really enjoyed. 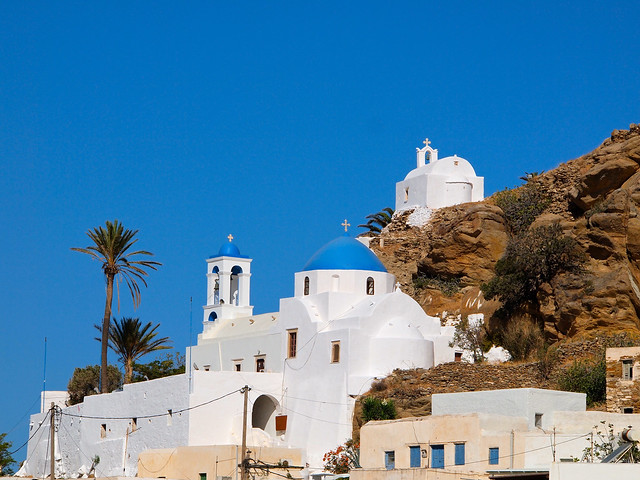 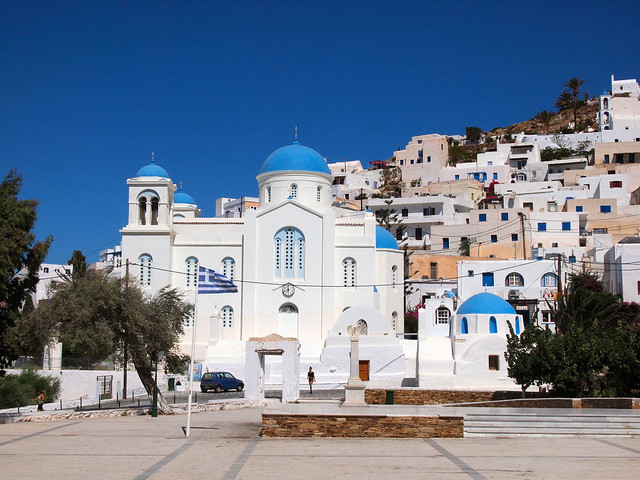 Visit the ruins of Skarkos

If you head downhill and away from the Chora, you'll find the ruins of Skarkos, a prehistoric settlement set atop a hill. The archaeological site is an active one, and you can pay to explore the ruins if you feel so inclined. I don't know that it would be very interesting without a guide (and I'm not sure that there are any on-site that you can hire), but it's still worth swinging by to take a look.

Hike up to the amphitheater

If you want a bird's-eye view of the island of Ios, hike through the Chora, past the windmills, and to the new amphitheater that looks out over Mylopotas Bay. The amphitheater was built to host cultural performances (in hopes of attracting non-backpacker types), but I'm told that not much actually happens there. It sure does offer a great view, though.

Lastly, perhaps you just want to roam around the island counting churches and chapels. Rumor has it that there are 365 churches/chapels on the island — one for every day of the year. 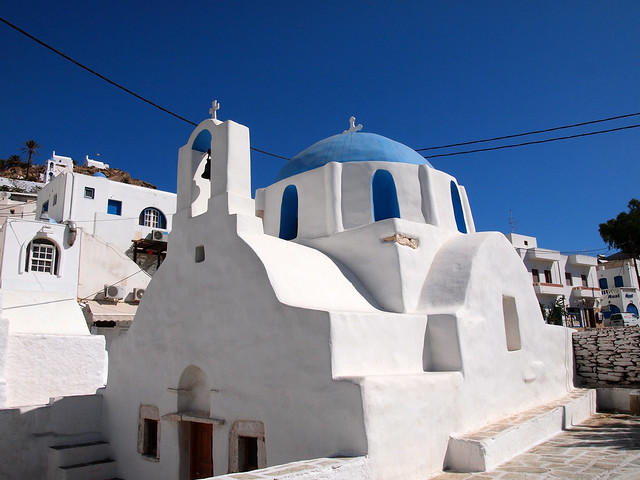 By far the most popular beach on Ios is at Mylopotas Bay. You can walk here in about 15-20 minutes from the Chora to find golden sand and some tourism infrastructure (including restaurants, sun beds/umbrellas, and souvenir shops). The water at this beach was chilly even in September, but oh-so clear! 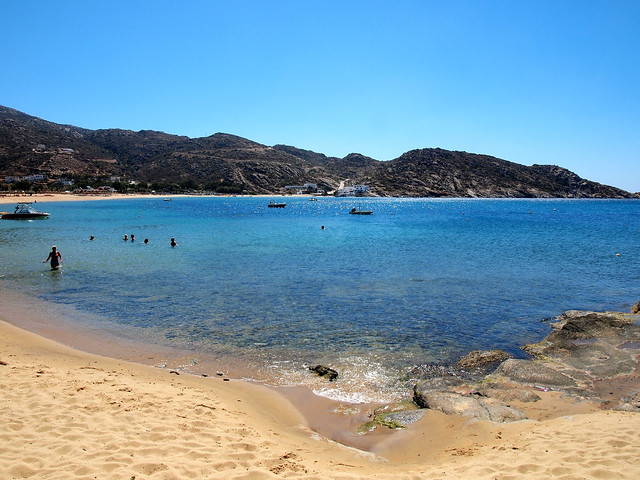 Other beaches on Ios

Other beaches worth checking out on Ios include Gyalos Beach (popular and close to the port), Kalamos Beach (isolated with clear water), and Magganari Beach (actually a series of beaches in a protected cove).

I can't speak to what the island is like in the height of tourist season. But Ios during the shoulder season? It is quiet and beautiful in a very rural sort of way. 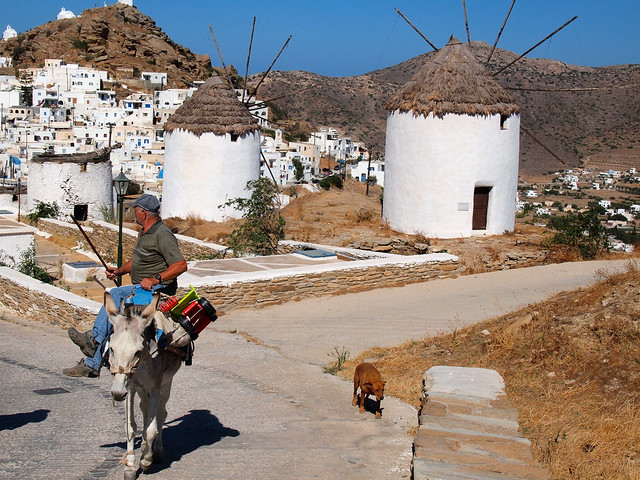 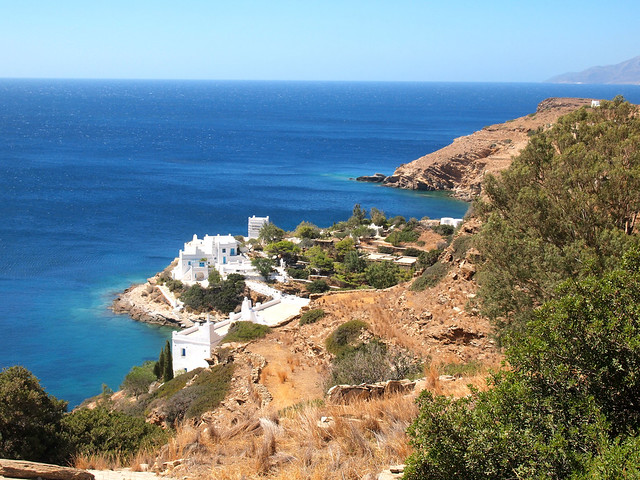 WHERE TO STAY ON IOS

I stayed at Homer's Inn Hotel, about halfway between the port and the Chora. The hotel was fantastic — friendly staff, clean rooms, and a killer view from the terrace/breakfast room (see the third photo in this post). It also had a really nice pool to lounge around if you didn't feel like heading to the beach. It's also quite affordable by Greek Islands standards.

Otherwise, there are a handful of hotels at most of the major beaches, along with some accommodation options in the Chora. Check out:

WHERE TO EAT IN IOS

There are lots of varied options in the Chora. I can personally recommend a family-run place called Lord Byron, which had good food and even better desserts. There are also some nice seafood places down near the port, where you can eat outside near the water.

Ios is small enough that you can reach most places on foot, or perhaps by bike. You can also rent cars and ATVs on the island. And, in the summer months, buses run limited routes around the island.

Is Ios an island YOU would like to visit? 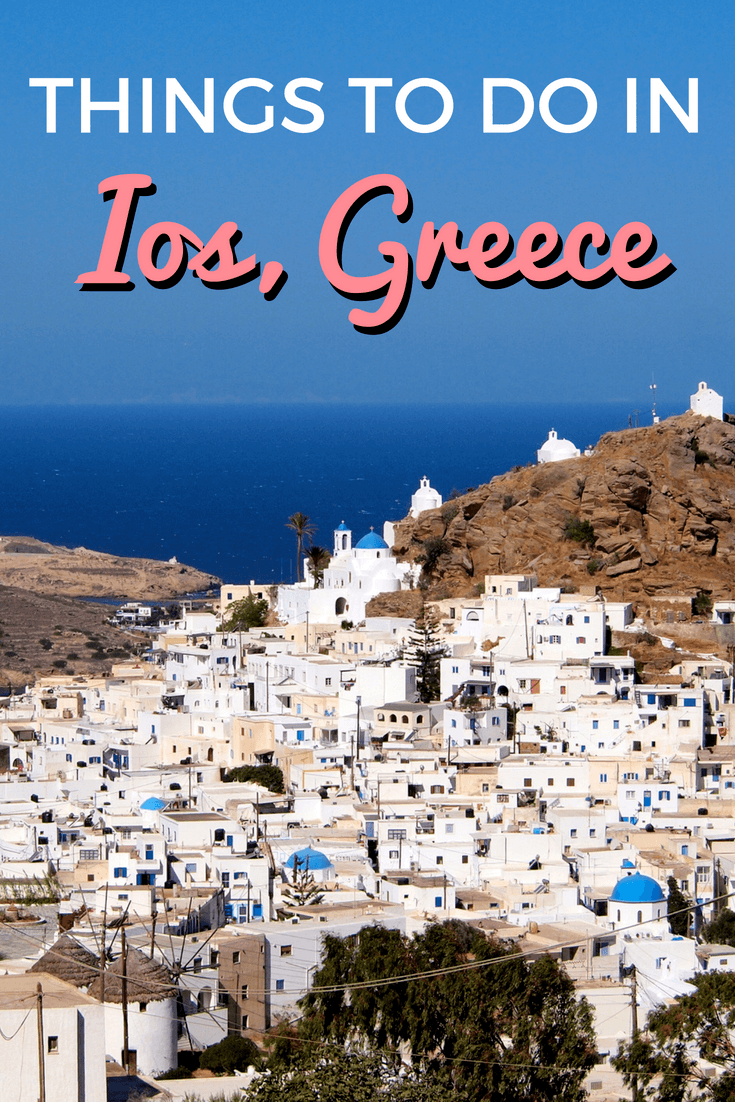 *Note: I visited Ios as part of a complimentary Greek Islands tour from Intrepid Travel through my partnership with them. As always, though, opinions are entirely my own.

25 Comments on “The Greek Islands: What to Do on Ios in the Shoulder Season”