Getting a Feel for Florence

Home » Europe » Italy » Getting a Feel for Florence

The Ponte Vecchio is the only bridge in Florence that survived WWII.

But it wasn't by accident or out of sheer luck that this iconic, shop-laden bridge avoided the retreating Germans' bombs in 1944. In fact, the Ponte Vecchio only survived because a certain German leader with a funny mustache liked the bridge. 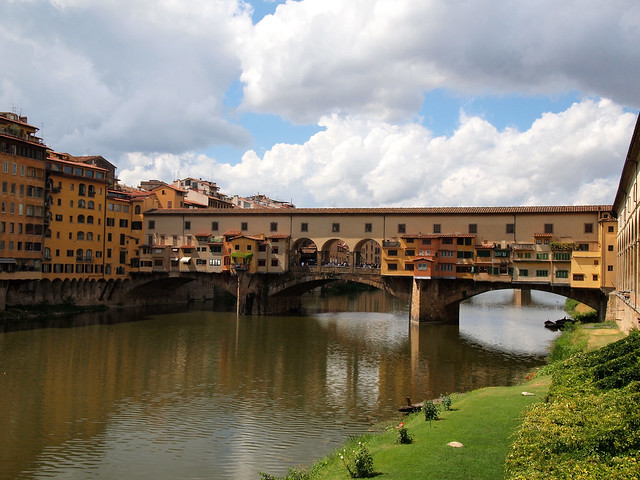 Before he became Der Fuhrer, my Walks of Italy guide explained, Hitler had visited Florence and walked across the Ponte Vecchio bridge the way the members of the Medici family would have centuries ago — through a covered walkway above all the shops. 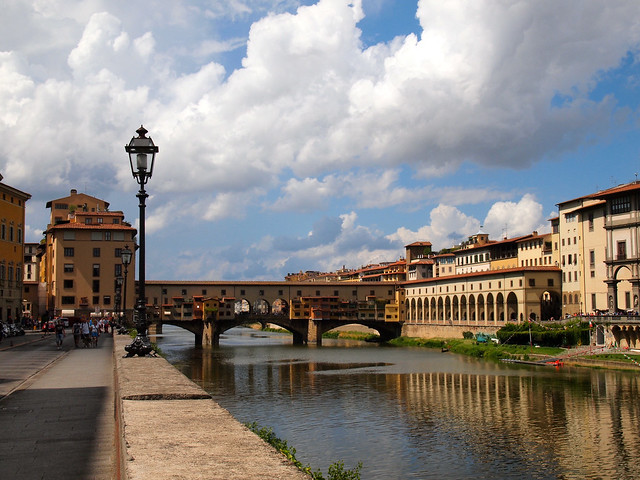 Because, whatever your opinion of the quality of the shops on the bridge, there's no denying that the Ponte Vecchio is striking — and also offers up great views out over the Arno River. 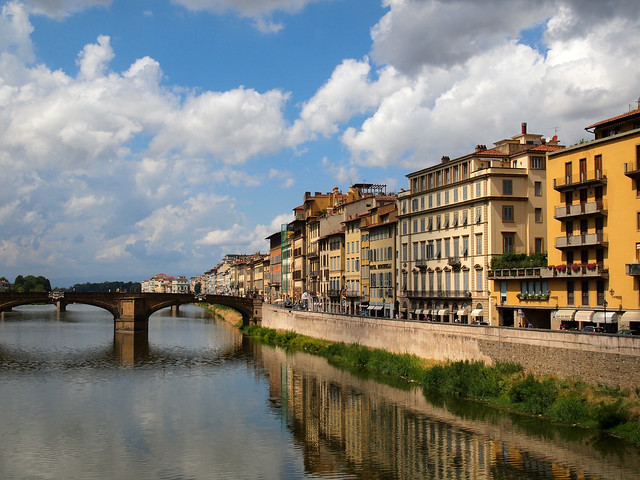 When most people think of Florence, they picture the terra-cotta-domed Duomo and Michelangelo's “David.” But did you also know that Florence is home to the “Gates of Paradise” and the final resting place of Galileo?

The former refers to a set of doors on Florence's Baptistery: gold-plated bronze doors that depict scenes from the Old Testament. 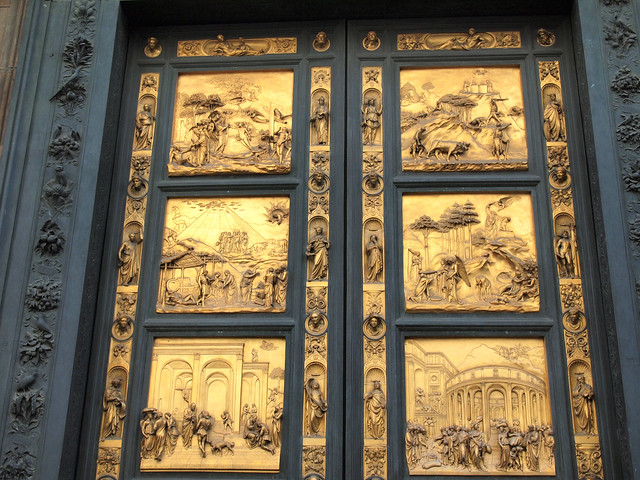 The latter — the grave of astronomer Galileo Galilei — can be found in the Basilica of Santa Croce, alongside the graves of famous Florentines like Michelangelo and Machiavelli. 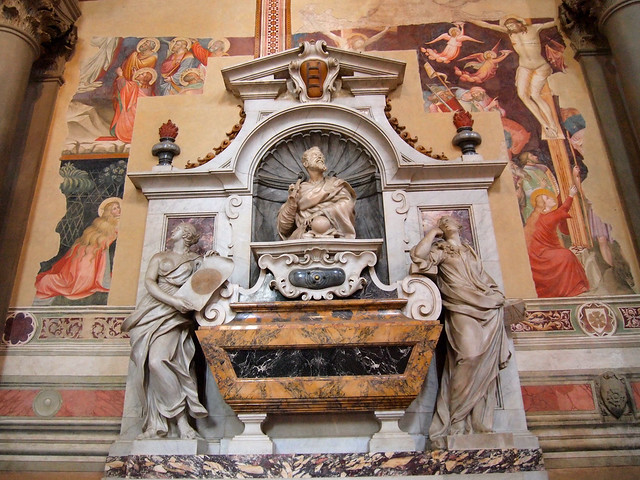 Florence does not have the canals of Venice or the ruins of Rome. In fact, even though Florence was founded by the Romans in 59BC, very few vestiges of its Roman days remain. There are no Roman theaters or stadiums preserved in Florence; no crumbling columns or left-overs from ancient temples. 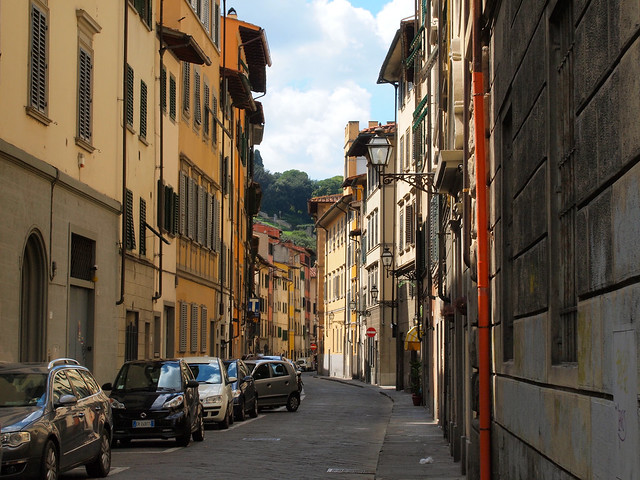 Walking past leather shops and gelato stores, Florence definitely still feels like Italy. But, with its Medici influence and more northerly location, it is entirely unique and completely its own city. 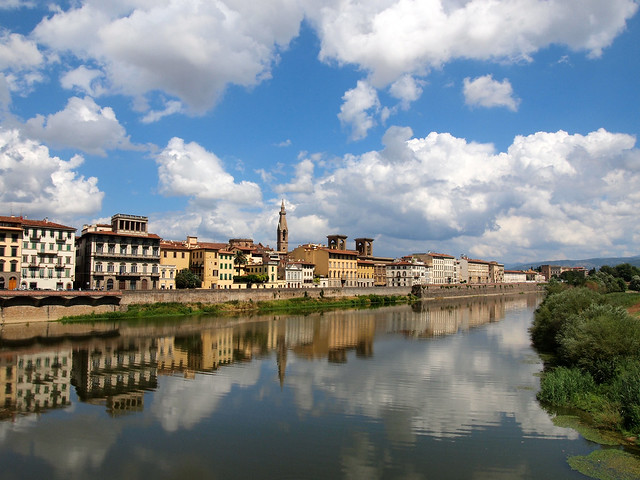 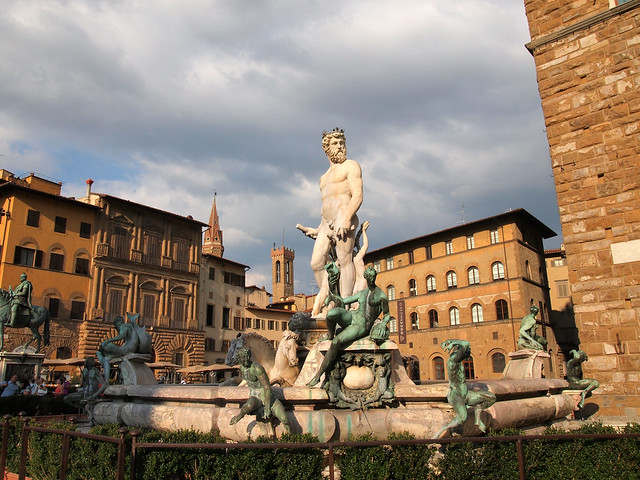 I liked this about Florence. Exploring the city for a few days truly felt like discovering someplace new.

Sure, I did a lot of the touristy things: 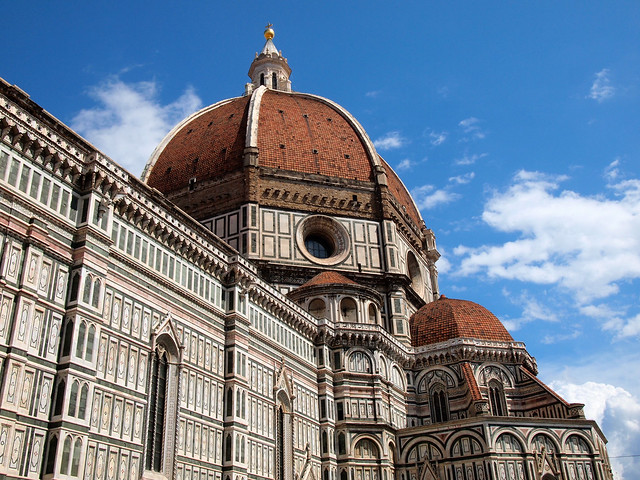 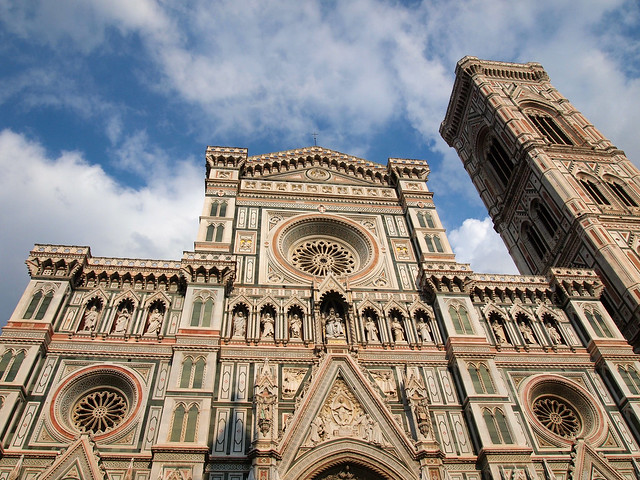 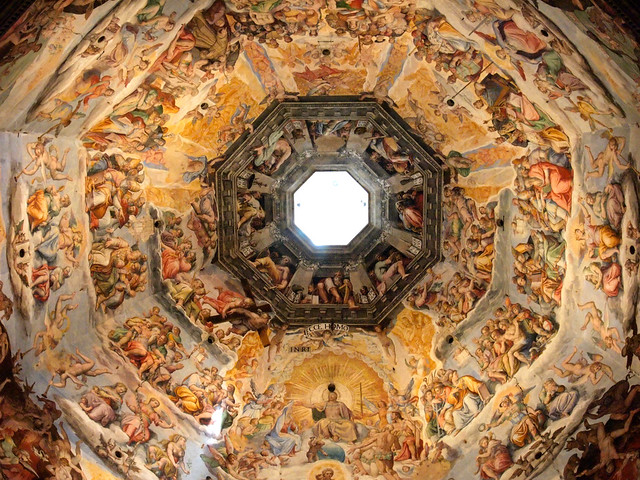 I walked across the Ponte Vecchio. 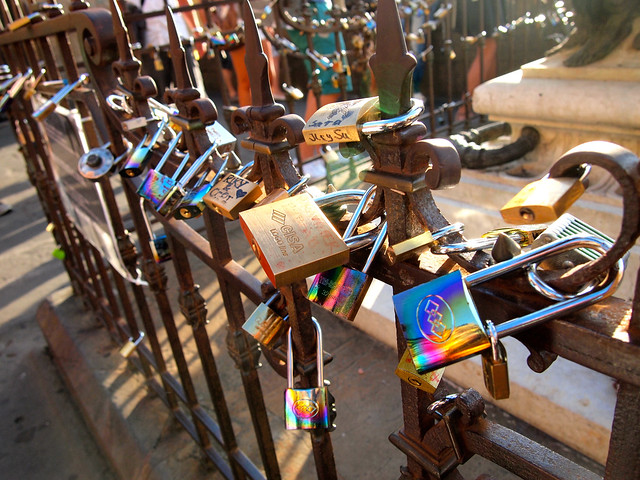 I climbed up to Piazzale Michelangelo across the river for some great views. 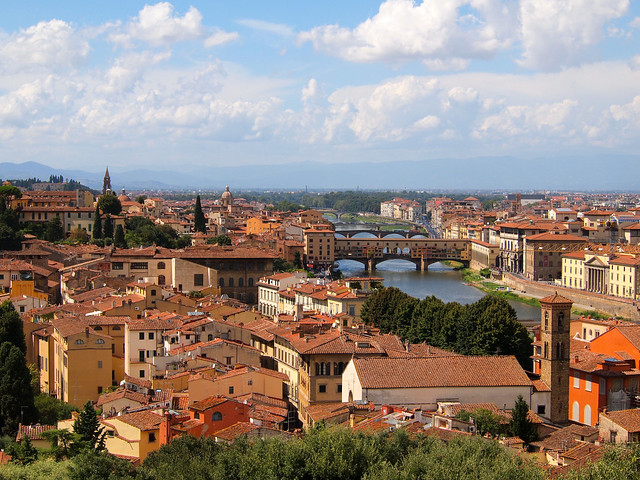 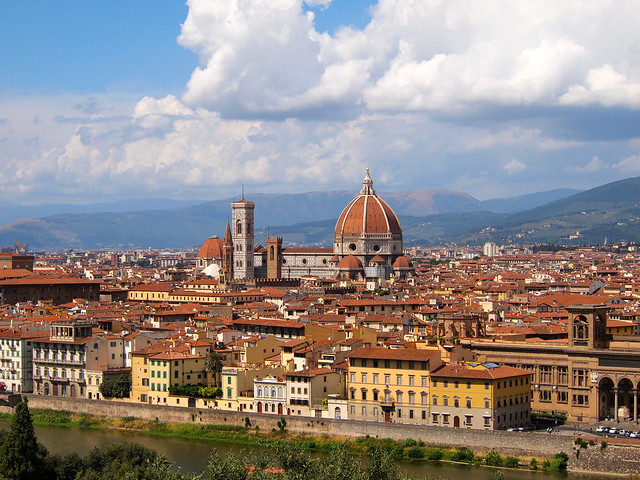 But I also did some less-touristy things:

I sought out the graves of famous people at Santa Croce (okay, so this is still kind of touristy, but you won't find lines here like you will at the Duomo). 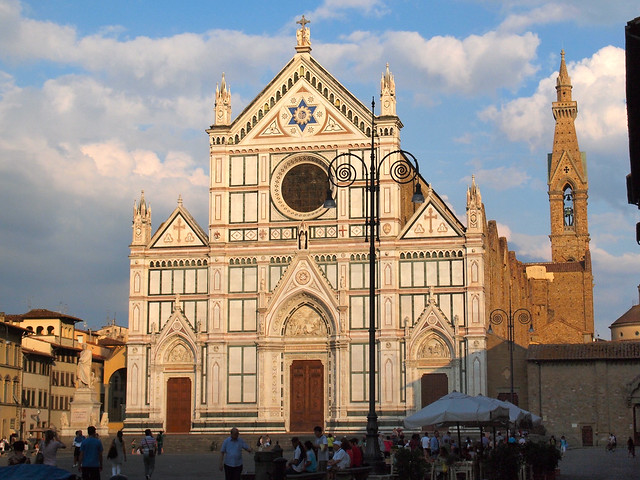 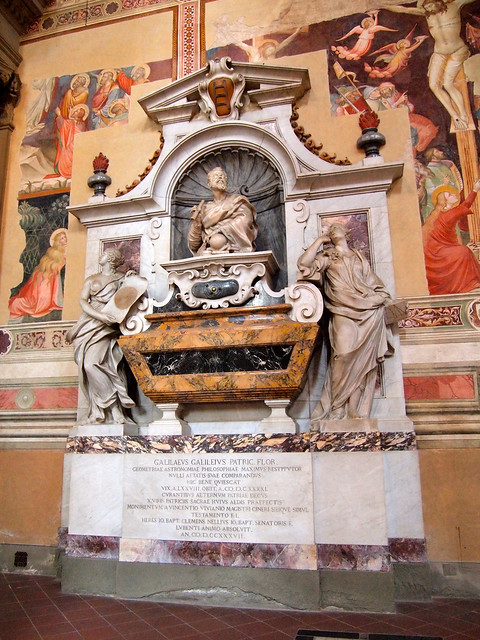 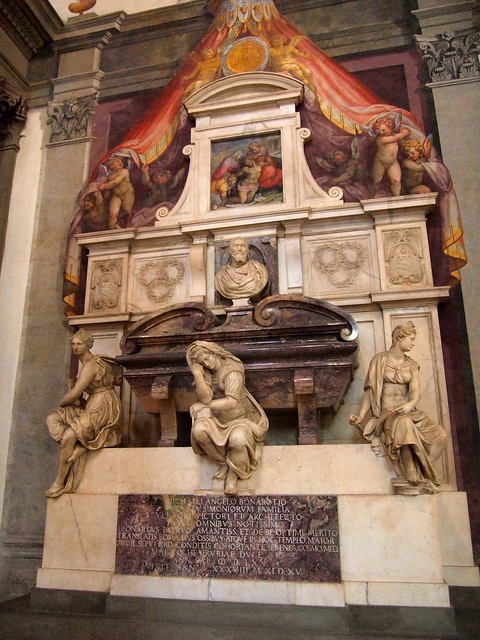 I skipped the formal art galleries and instead wandered down side streets in search of funny street art. 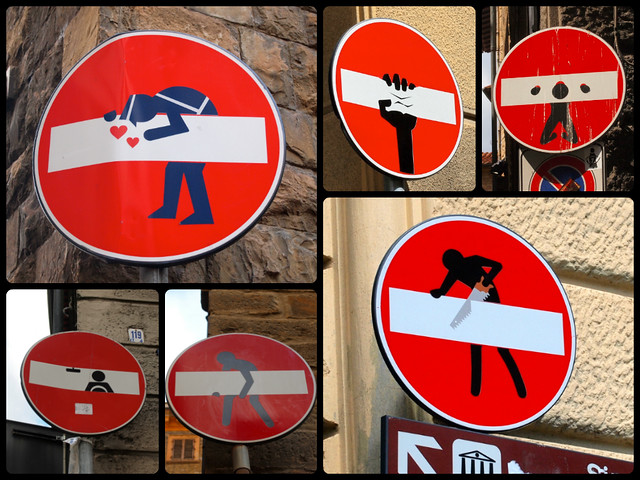 I went shopping at the markets instead of the high-end stores. 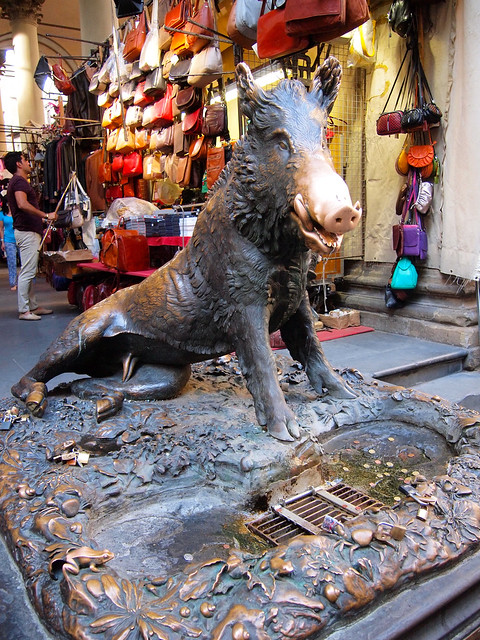 At the end of the day, Florence managed to surprise me. As someone who's not a huge fan of art museums and who certainly can't afford to shop in designer stores, I didn't arrive in Florence with the highest of expectations. I didn't originally think there would be enough for me to do in the city for 3 days, let alone the 5 that I ended up spending there.

But, as often happens when I travel with few or low expectations, I was proven wrong.

With its interesting history and unique identity, Florence managed to not only keep me busy, but also to charm me more than I thought it would. It's definitely an Italian city I recommend visiting.

*Note: I visited Florence as part of my Busabout trip around Europe. They provided me with transport on all 3 of their Europe loops, but all opinions of the destinations I visit are entirely my own! I also received a complimentary walking tour in Florence thanks to Walks of Italy.

42 Comments on “Getting a Feel for Florence”