A Romantic Getaway to the Finger Lakes

Going away for a honeymoon after getting married is a tradition that dates back hundreds of years. Today, a honeymoon is traditionally taken to somewhere exotic and maybe a little luxurious – or at the very least kind of far away from home and all the family you've been entertaining while they were in town for your wedding.

When thinking about our own post-wedding honeymoon, Elliot (my now-husband) and I knew that we wanted to go somewhere epic. I wanted to take him to New Zealand, my favorite country and a place he'd never been.

But I wanted to go in New Zealand's summer/autumn months, which didn't really line up with our October wedding (October is early spring in NZ). So we decided to postpone our “big” honeymoon for 6 months and go on a “mini-moon” immediately following the wedding instead.

What is a mini-moon?

A mini-moon is exactly what it sounds like: a “mini” or shorter honeymoon, usually taken somewhere closer to home.

When thinking about where we could go for our mini-moon, I had a few criteria in mind:

In the end, we decided on the Finger Lakes region of New York state.

It was a place neither of us had been (but one that I'd been invited to explore as a blogger a couple times in the past), was only a 4.5-hour drive from home, and was a great mid-October destination.

Plus, we knew there would be plenty of romantic things for us to do there.

Romantic things to do in the Finger Lakes

Elliot and I aren't your “typical” newlyweds. Since we've been together (and lived together) for years, we didn't really want the type of honeymoon where we'd hide away in a resort and do pretty much nothing for 4 days. Instead, we wanted a little big of variety and adventure to go along with a dash of newlywed romance.

Our Finger Lakes itinerary, therefore, included things we both liked, from easy hikes to a distillery tour to a visit to “Mark Twain country.”

We discovered that there's a lot more to do in the Finger Lakes region than most people realize.

If you want to plan your own mini-moon (or just a romantic long weekend getaway) to this part of the US, here are just a few of the things you might want to add to your itinerary:

For the wine lovers: Wine tasting

The Finger Lakes region is quite well-known for its wineries, so it's no surprise that there are multiple “wine trails” to choose from. The largest is the Seneca Lake Wine Trail with 35 member wineries, but you can also check out the wine trails around Cayuga and Keuka lakes.

Elliot and I visited two wineries near Keuka Lake – Bully Hill Vineyards and Dr. Konstantin Frank Wine Cellars. Dr. Frank's (as it's often called colloquially) is famous for being the place where the first Vinifera vines were planted, sparking a renaissance in winemaking in the United States.

Elliot especially loved our distillery visit, where we got to try whiskey, gin, vodka, and even soju that are made with local grains and grapes (yes, they make a lot of their alcohol using area grapes and wines!).

And if you *both* want to enjoy the local wines and spirits safely? Consider booking yourself on a day trip that includes transport, like this Seneca Lake Wine Tasting & Tour, this Keuka Lake Winery Tour, or this Finger Lakes Brewery Tour.

For the nature lovers: Chase some waterfalls

In the Southern Finger Lakes on the shores of Seneca Lake you'll find the small town of Watkins Glen. This little town is most well-known for it's state park, which features a waterfall-filled gorge.

Elliot and I spent a couple hours walking the gorge trail and taking photos of ALL THE WATERFALLS.

Pro tip: Allow at least 2 hours to walk the entire gorge trail out and back; more time if you know you're prone to taking copious amounts of waterfall photos like me! And be aware that there are about 800 steps to go up/down along the trail, depending on which direction you're going.

After checking out all the waterfalls in Watkins Glen State Park, we also went to see a couple in the tiny town of Montour Falls – because you can never see too many waterfalls, right?

For the history lovers: Get to know Mark Twain

Even though Mark Twain (Samuel Clemens) lived all over the world, he actually spent many summers in the city of Elmira, New York, after he married his wife Olivia Langdon. (Did you know that? I'll admit that I had no idea!)

When in Elmira, Twain and his family usually stayed with Olivia's sister Susan Crane at Quarry Farm. Twain complained that there were never any quiet spaces for him to work and write, so he had a small study built on a hill away from the house. It was in this study that Twain wrote many of his famous novels, including The Adventures of Huckleberry Finn.

The study was eventually moved to the campus of Elmira College in order to preserve it, and now you can visit it!

You can also visit the burial site of the entire Clemens family at Woodlawn Cemetery in Elmira. (I realize this may not be the most romantic-sounding thing to do on a honeymoon, but both Elliot and I weirdly enjoy old cemeteries!)

For the art lovers: Glass in Corning

The town of Corning is a bit south of the Finger Lakes themselves, but is definitely worth adding to your itinerary, especially if you love art! Corning is known for its glass-making, and is home to the Corning Museum of Glass.

We spent half a day at the Corning Museum of Glass admiring its exhibits and gawking at all the cool glass demonstrations. You can even blow your own glass here for a fairly reasonable price, which is really fun!

And the town of Corning itself is super cute. I highly recommend spending some time shopping along the main street in the Gaffer District. Here you'll find a mix of boutique shops and restaurants – head to Vitrix's glass studio if you want to pick up some locally-made glass at fairly reasonable prices.

Where to stay in the Finger Lakes

So how do you turn these itinerary suggestions into a romantic mini-moon? I think a lot of it has to do with where you stay. There are so many adorable little towns around the Finger Lakes, and plenty of unique hotels and B&Bs to choose from.

Located in (can you guess?) Watkins Glen, the Harbor Hotel is the largest hotel around, with rooms that look out over Seneca Lake. The hotel is luxurious but not pretentious, and was named the best waterfront hotel in the US in 2016 by USA Today's 10Best. We enjoyed the window seat in our room, the comfy beds, and dinner at the Blue Pointe Grille. (Read reviews on TripAdvisor | Book a room here!)

The little town of Hammondsport on Keuka Lake charmed our socks off. It's small and cute, and also really close to some of the best wineries in the Finger Lakes. A few minutes outside of town is the Vinehurst Inn & Suites, where we spent our first night in the Finger Lakes. It's a cozy, homey sort of place, and we ended up with one of the suites complete with fireplace and two-person jacuzzi tub. Perfect for a mini honeymoon! (Read reviews on TripAdvisor | Book a room here!)

We also stayed at the Radisson Inn in Corning, which is perfectly positioned for exploring the Gaffer District in Corning.

Where to eat in the Finger Lakes

Another big highlight of our mini honeymoon in the Finger Lakes was all the delicious food we ate. I'm not usually a foodie, but we had so many good meals in really cool spots that I decided I had to highlight the best ones!

My favorite place we ate was The Cellar in Corning. It's a modern fusion restaurant that has a huge wine menu (presented on a special iPad) and some really cool tapas dishes. Elliot got a bowl of pork ramen that left us both drooling, and for dessert we had s'mores complete with “tableside campfire.” Everything was delicious, and it was just a really fun dining experience.

2. The Elf in the Oak, Burdett

With a name like “The Elf in the Oak,” how could it not be an awesome spot for lunch? With an emphasis on homemade sandwiches served up in a cozy cottage-like setting, we thoroughly enjoyed this spot. They have a nice patio, too, with views out over Seneca Lake.

If upscale dining in a historic home is more your style, check out the Pleasant Valley Inn in Hammondsport (it's right across the street from the Vinehurst Inn). I was obsessed with the cool wall paper inside, and the fact that they do a caramel popcorn sundae for dessert.

Want to add some extra romance to your Finger Lakes honeymoon?

Go for a massage – we did a couples' massage at the Namaste Event Spa & Wellness Center in Horseheads.

Take to the skies – you can go for a seaplane tour of the region with Finger Lakes Seaplanes, which would be especially beautiful in the fall. Sadly it was too windy for us to do this when we were there, but it certainly would be a perfect honeymoon activity.

Make art together – I mentioned earlier that you can make your own glass at the Corning Museum of Glass, which is a perfect activity for couples. Make ornaments or a picture frame together, or maybe sand-blast some cute Mr. and Mrs. pint glasses.

So who's ready to plan a mini-honeymoon (or even just a weekend getaway) to the Finger Lakes?

Thanks to Corning and the Southern Finger Lakes for hosting us on our mini-moon. As always, though, all opinions are 100% my own. 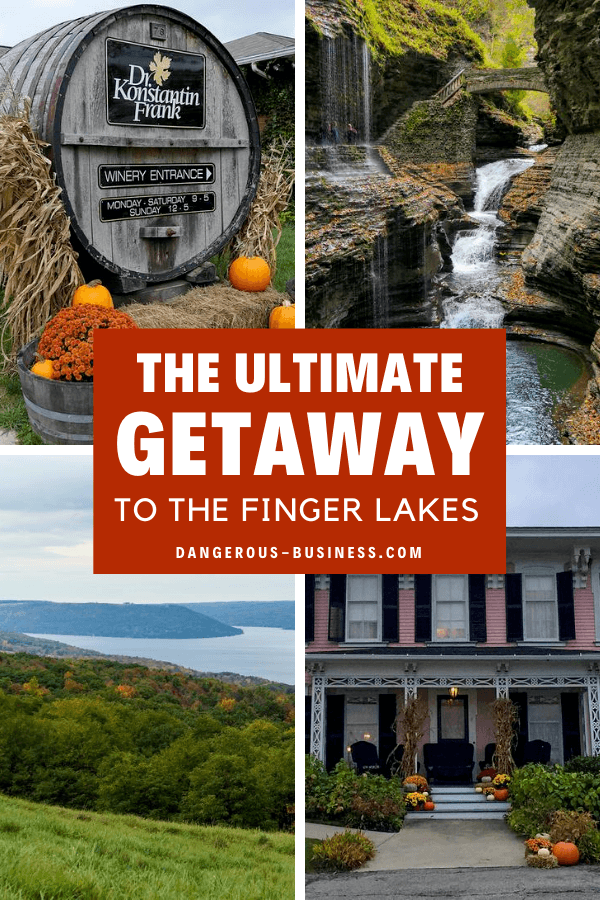 17 Comments on “A Romantic Getaway to the Finger Lakes”