Everything You Need to Know About Visiting White Sands National Park

When it comes to national parks in the U.S., you've probably heard of all the “big ones” – the Grand Canyon and Yellowstone and Yosemite… they're familiar to most Americans (and even to many non-Americans).

But the National Park Service manages much more than just national parks. In fact, the NPS manages more than 400 areas through the U.S., including national parks, monuments, battlefields, historic sites, lakeshores, and more.

And many of these are severely under-appreciated.

Ever since I first saw photos of White Sands National Monument when I was in college, it was a place I knew I wanted to visit.

I mean, what's not to love about rolling acres of white sand dunes, right?

White Sands lies in the Tularosa Basin in the northern end of the Chihuahuan Desert in southern New Mexico. It's made up of 275 square miles of gypsum sand dunes – in fact, it's the largest gypsum dune field in the world. The dunes were formed after the evaporation of an ancient sea and survive because of little rainfall and no way for water to flow out of the basin and take/dissolve the gypsum with it.

The first time you see the dunes, you'll do a double take, wondering whether you're looking at pure white sand or snow drifts.

Speaking of the first time you see the dunes, it took me quite a few years to make it to this part of New Mexico.

Even though I've dreamt of going for ages, the problem was that White Sands isn't exactly the most convenient place to get to. The closest city is Alamogordo, which is at least 3-4 hours from Albuquerque and requires you to have a car and some patience for driving through desolate landscapes and military missile ranges.

Because of this, it took a few years for me to finally get there.

But the wait was SO worth it.

According to the National Park Service, the weather in the Tularosa Basin is usually clear – sunny skies for approximately 330 days out of the year, they say.

So imagine our surprise when my friend Lisa and I pulled up on a Saturday morning to find dark storm clouds and rumbles of thunder!

Thankfully, we had also visited the park the evening before, when the skies had been mostly clear.

Seeing the dunes in such contrasting conditions was interesting, though – the sand took on a totally different color under storm clouds.

At White Sands, it's the unique dune environment that's being preserved. The gypsum dunes are home to a unique ecosystem of plants and wildlife, many of which only exist here in the northern end of the Chihuahuan Desert.

Along with wanting to preserve the dunes themselves, the NPS decided to protect White Sands for scientific reasons, too – many scientists refer to this area as “a desert Galapagos” because of the rapid evolution that has taken place here. For example, both mammals and reptiles have adapted to the dune environment by “shedding their colors” and turning almost completely white in order to blend in with the surrounding environment.

Plants, too, have adapted to survive in such a harsh environment. Some extend roots down far enough to reach water (meaning many are as tall as the dunes themselves); others “build” pedestals around themselves in order to stay on top of the shifting sand.

Mother Nature is pretty incredible, and visiting a place like this is a good reminder.

It's no wonder that this spot has since been made an official National Park.

Things to do at White Sands National Park

So what exactly does one DO at White Sands National Park? That's a great question. And the answer is – pretty much whatever you want!

Here are a few things you can (and should) do at White Sands:

The towering walls of white might look daunting, especially if you've climbed other dunes before made of loose sand (and maybe possibly thought you were going to die in the process). But the dunes at White Sands are actually fairly wet beneath the surface, meaning they're incredibly easy to walk on (and also aren't likely to burn your bare feet).

Drive all the way to the back of the park where the loop is. Then pick a place to park and get climbing!

Some of the dunes are steep enough to resemble hills of snow, and you're bound to see people armed with plastic sleds on at least a few of them. This is absolutely allowed – and even encouraged! – at White Sands.

You can either bring your own sled, or purchase one at the visitor's center on your way in.

You're free to bring food into the park (so long as you dispose of your garbage!), and there are some funky covered picnic tables in the loop section of the main road.

4. Take a free hike with a Ranger

There are hikes you can tackle on your own at White Sands, but if you're only going to do one, I would recommend the Sunset Stroll. This is a free one-hour guided hike through the dunes before dusk where you'll learn about the area's geology and flora/fauna and then be in a perfect position to watch the sun set over the sand.

Check out all the Ranger Programs at White Sands here.

Speaking of sunset, you don't want to miss it! The dunes turn shades of blue and pink under the setting sun, and, believe it or not, you won't have to compete with tons of other people to watch since there are plenty of dunes with great vantage points.

It took me years to finally make it to White Sands – but the wait was well worth it. The dunes are just as incredible in real life as they look in photos (in fact, they were even softer and cooler than I'd imagined), and the fact that we didn't have to compete with thousands of other tourists made the experience felt like it was all ours.

I haven't been to EVERY National Park Service-managed area in the U.S., of course, but I have to wonder if White Sands might be one of the most underrated. You don't hear a ton about it, and yet it's one of the most unique and beautiful protected areas I've had the pleasure of visiting.

Needless to say, if you can make a trip to White Sands National Park while you're in New Mexico, DO IT!

Have you ever heard of White Sands? Would you like to go? 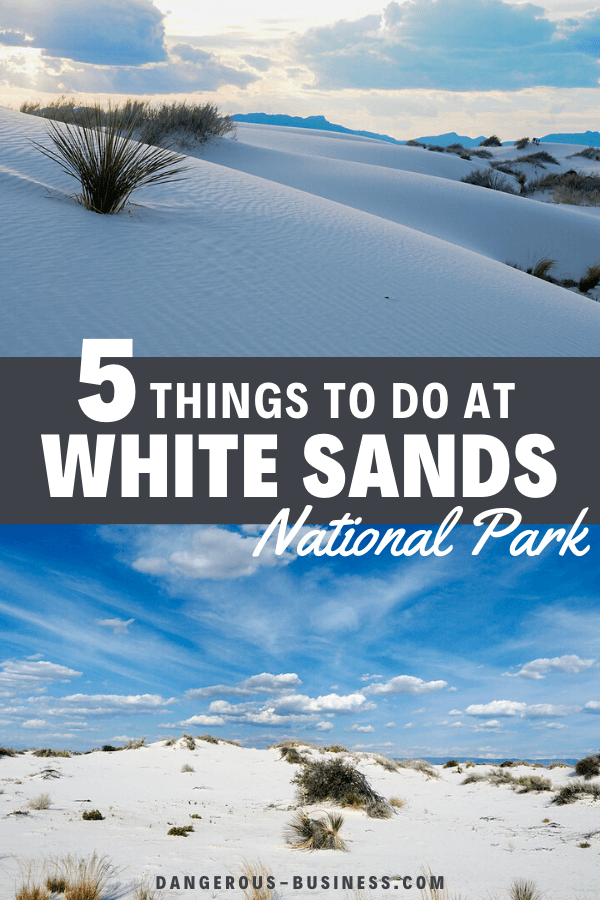