If you had to guess, what do you think the most-consumed meat in the world is? Beef? Maybe chicken?

I learned all of this at the beginning of a new tour offered by Urban Adventures in Toronto — their “When Pigs Fry” tour of Toronto, which focuses on the city's long history as a pork capital. (There's a reason the city used to be nicknamed “Hogtown,” you know…) 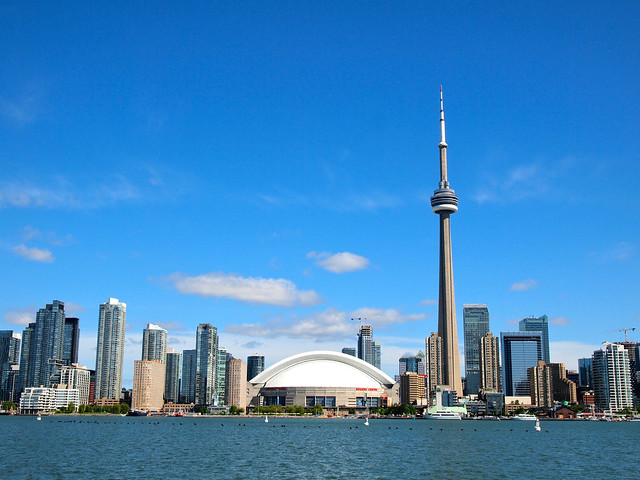 Our tour began outside the Flatiron building at the corner of Church, Wellington, and Front streets in downtown Toronto. There, we met our local guide Jason (who helped design this pork-centric tour), and got a brief lesson about pigs.

We learned that pigs were brought over from Europe in the 1700s and were traditionally free-range. They would be let loose on islands and in cities, and would scavenge for food — and also clean up the streets in big cities like New York and Philadelphia. Their wild ancestors can still be found in the original 13 states. 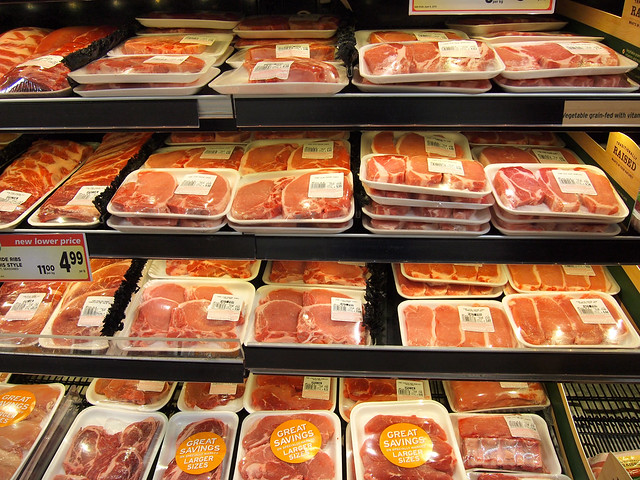 We made a brief stop in a grocery store to check out the price of pork and bacon. (If you're curious, bacon in Toronto sells for $3-$6 per pound.) Jason pointed out that pork is generally one of the cheapest meats, meaning that it's also always been quite recession-proof.

Then it was time to eat. 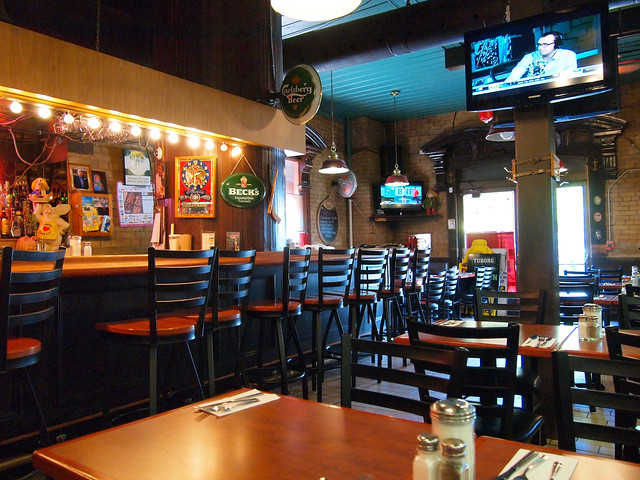 Our first food stop of the day was at Paddington's Pump, which is a restaurant connected to the world-famous St. Lawrence Market. The market was closed on Monday, but Paddington's Pump was still serving up what we came for — the peameal bacon sandwich.

Peameal bacon was “invented” in Toronto by William Davies, and is a thicker cut of pork loin — different from regular bacon, which usually comes from the belly of a pig. Its “peameal” name came from the fact that the meat was traditionally rolled in a coating of crushed-up yellow peas. These days, it's coated in cornmeal — but is still delicious. 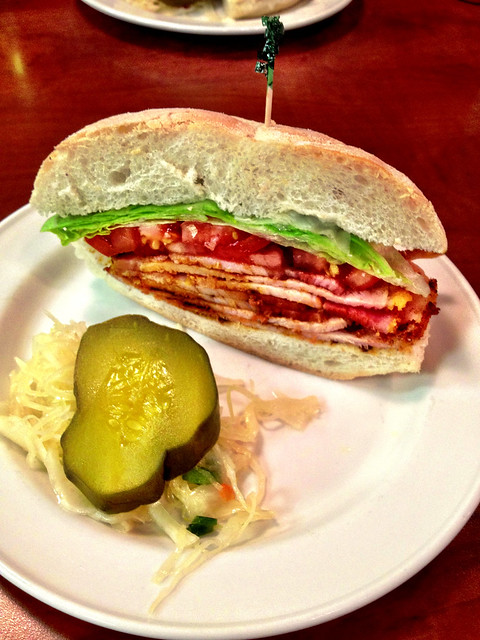 At Paddington's Pump, the sandwich is called “the Oink,” and is made fresh when you order it and served up on a kaiser roll.

After filling our bellies with peameal bacon, we hopped on the 504 streetcar to head to the other side of the city. This streetcar line sees more than 50,000 riders per day, Jason told us. We passed the time playing pig trivia (for example, did you know that the phrase “to sweat like a pig” is anatomically impossible since pigs don't sweat?), with Jason rewarding us with maple-bacon saltwater taffy. 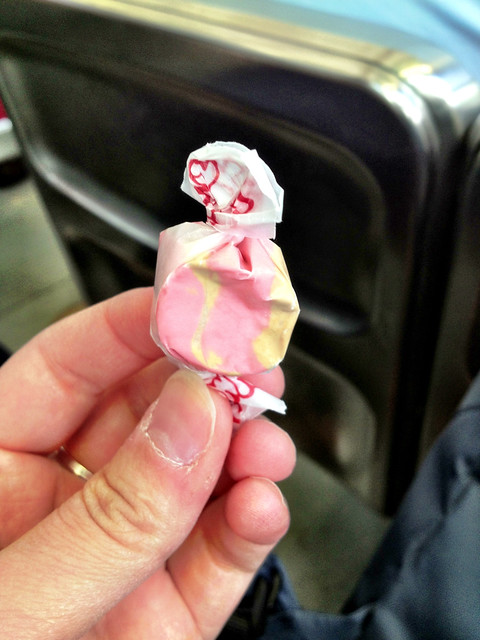 Our second food stop was at Lou Dawg's, a Southern barbecue joint on King's Street West. Here we were treated to a Canadian favorite with an American twist — pulled pork poutine. Poutine is famous in Canada (usually gravy and cheese curds served over fries), and Lou Dawgs just adds a Southern twist: pulled pork and a little barbecue sauce. 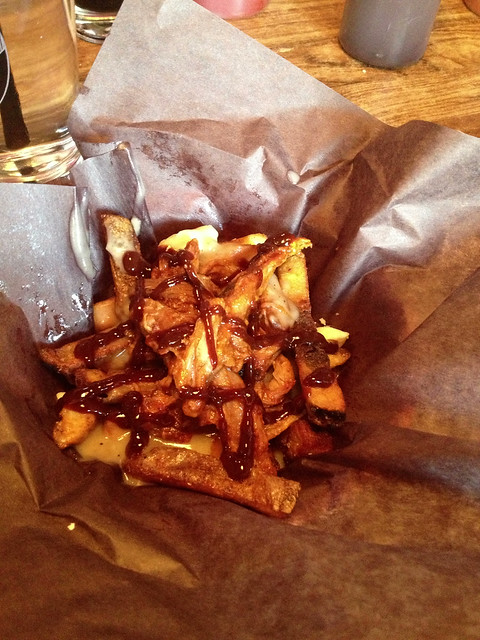 The word “poutine” is actually French for “a mess,” Jason told us, and our Lou Dawg's dish certainly was a bit messy. But it was also delicious. Lous Dawg's sources all of its ingredients for this dish (and most of its others) locally, and I felt like you could taste that in every bite. 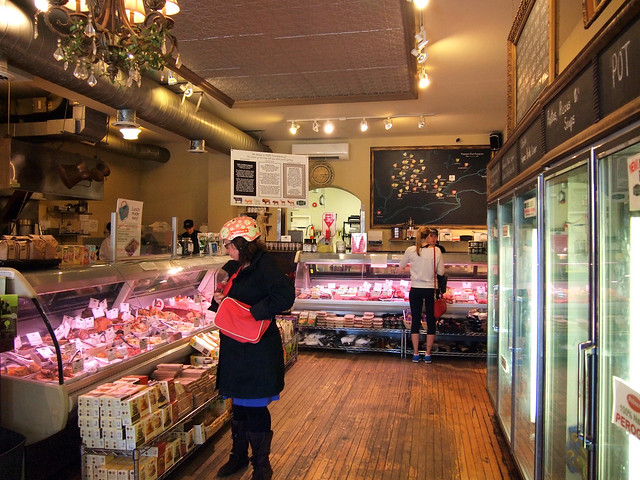 We walked from Lou Dawg's up to Queen Street for our next tasting at The Healthy Butcher, which is — not surprisingly — a butcher shop. But it's also so much more.

The Healthy Butcher has a pledge to serve only locally-sourced organic meat from animals that are pasture-raised and hormone and antibiotic-free. The shop also has a full transparency policy — you will always know where your meat came from here. The owners visit every farm and work directly with the farmers to source their meat selection; sometimes the farmers even drop the meat off directly to the shop.

Opened in 2005, The Healthy Butcher isn't exactly cheap (bacon here goes for around $15 per pound), but there is a growing demand for this sort of meat both in Toronto and beyond. We were treated to both pan-fried and oven-roasted bacon here. I actually preferred the oven-roasted, since it doesn't render as much fat and therefore has a bit more flavor. 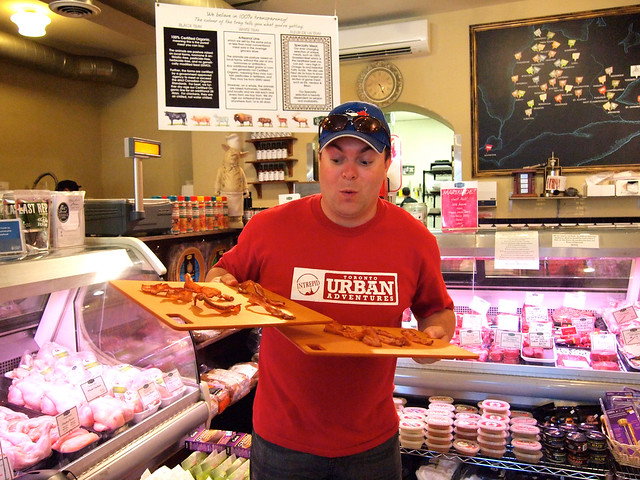 It was great to get an insight into the organic food movement in Toronto, and to be able to appreciate why this meat is so much more expensive. 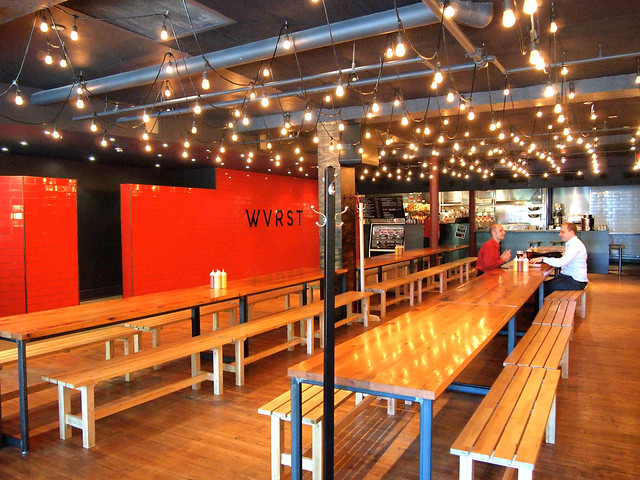 Our last stop of the day was at WVRST Sausage Hall and Beer Garden — a quirky German gem on King Street West. Here we extended our already-full bellies with currywurst — Polish sausage covered in a sauce made from ketchup, curry powder, and Worcestershite sauce. If you've ever been to Germany, chances are you've tried it. 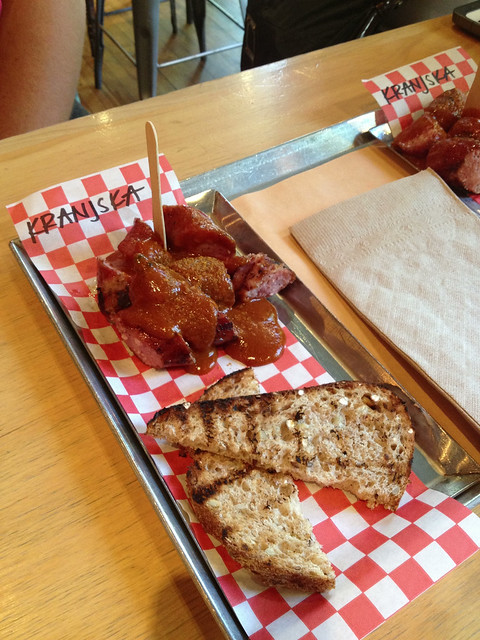 It was actually probably my least favorite dish of the day, but only because I'm not a big fan of currywurst and because we'd already had so many tasty pork products. But WVRST had my favorite indoor space — it really does feel like a beer garden!

In all honesty, though, of the handful of food tours I have taken thus far on my travels, the “When Pigs Fry” tour of Toronto has to be one of the best — and one of the tastiest. As one of Urban Adventures' newest tours on offer, I predict it will be a very popular one in Hogtown! I highly recommend it! 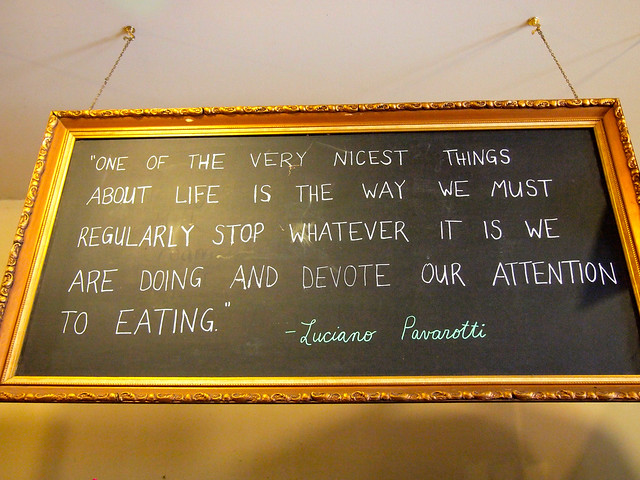 What: When Pigs Fry tour

Price: $76 CAD (roughly $58 USD). Price includes an expert guide, one-way streetcar transport, and food tastings and water; other drinks are at your own expense.

Starting point: Outside the Hockey Hall of Fame (NW corner of Yonge St. and Front St.)

Availability: At present, this tour is offered on Wednesdays, and Friday-Sunday at 2 p.m.

What do you think? Would YOU want to eat your way through Hogtown? *Note: I was a guest of Urban Adventures on this food tour of Toronto. My opinions, however, are my own and not at all swayed by free bacon.

38 Comments on “Eating Hogtown: A Pork-Themed Tour of Toronto”