It was cold as we packed up the van and began the drive from Queenstown to Glenorchy – cold enough on that March morning for there to be a fresh dusting of snow on the mountain tops surrounding Lake Wakatipu. Locals would tell us all day that it wasn't usually this cold this time of year.

But Elliot and I were prepped – we had on multiple warm layers, waterproof boots, and even knitted hats to keep out the cold.

We were ready for a jet boating adventure. 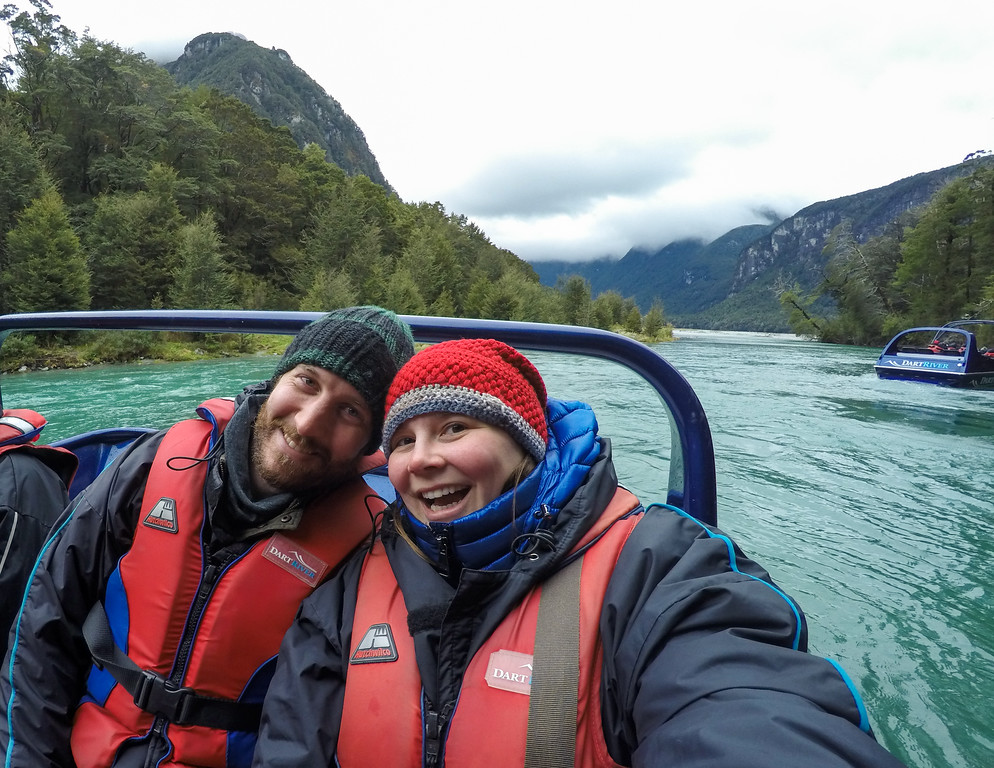 A jet boat, in case you're unfamiliar with the Kiwi-invented vehicle, is essentially a giant jet ski that can operate on the shallow rivers of New Zealand's South Island. It was originally invented to help people reach remote farming areas, but today is also a thrill ride that many tourists pay good money to enjoy.

On previous trips to New Zealand, I always gravitated towards the Shotover Jet, the bright red jet boat that zips through the narrow Shotover Canyon just outside of Queenstown. This is the jet boat you'll see advertised the most all over the South Island. And, while I do legitimately love the Shotover Jet, I wanted to try something a little different this time around.

The day before, as Elliot and I were popping in and out of stores in Queenstown in order to dodge rain showers, we stopped into a travel agency and saw brochures for Dart River Adventures. A decade earlier, I had done a horseback riding tour with them in the Dart Valley, but I didn't have any experience with them when it came to their jet boats. Our New Zealand honeymoon seemed like the perfect opportunity to try them out.

We booked two spots on the Dart River “Wilderness Jet Safari,” and I told Elliot to prepare for an epic adventure.

Since we had a vehicle at our disposal, we decided to drive to the town of Glenorchy, where Dart River Adventures has its base. (They also offer transfers by bus from Queenstown if you don't have a car.) The drive took under an hour, with the road snaking along the shore of Lake Wakatipu. I spent the ride marveling at the snow-capped mountains, while Elliot did his best to keep us on the narrow, twisty road.

When we arrived at the base, we were actually offered the chance to re-schedule our jet boat adventure because it was so cold. “It'll be even colder on the water,” they said. But since it was our last full day in Queenstown and we came prepared with warm layers, we decided to go for it.

We got kitted up in long, insulated spray jackets and life vests, and then hopped on a bus for a short ride to where the jet boats were waiting for us in the water. 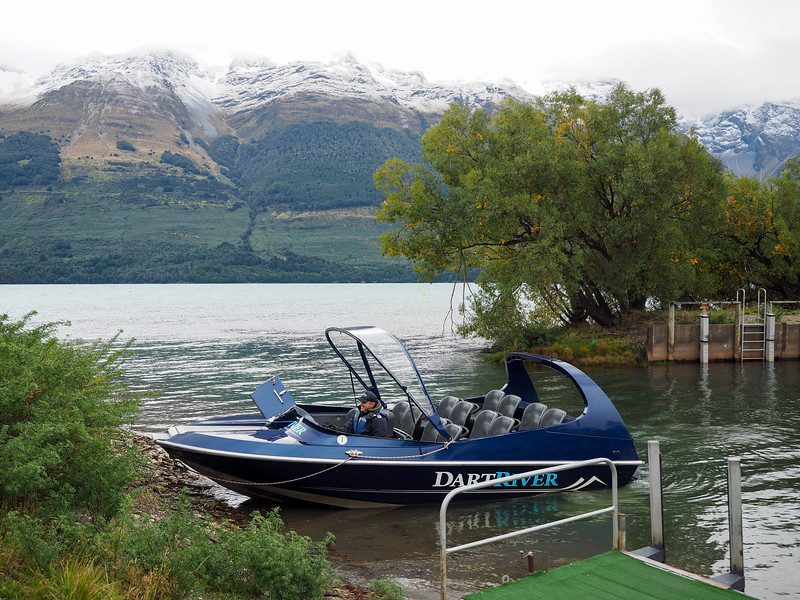 The thing that sets Dart River Adventures apart from the other jet boat operators in Queenstown is that their Wilderness Jet is the only one permitted to operate on the Dart River, a braided river system that winds its way down from the glaciers in Mount Aspiring National Park.

We first bounced across a small section of Lake Wakatipu, and then began making our way up the Dart River.

The Dart River is a braided river, which means that a bunch of small river channels twist and criss-cross and merge across the rocky river basin. But the tricky part for the jet boat pilots is that these river channels shift and move like a living thing – meaning that no two days on the river will ever be the same.

As we zoomed up the river (and I do mean “zoomed” – jet boats move FAST), it was impossible to not be awed by our driver, Elliot. (Great name, we said!) He navigated the river's braids with ease, knowing exactly when he could get us within inches of the bank and when the water was deep enough to pull an exciting 360-degree turn.

The wind was cold, but nothing could remove the grins from our faces.

We made our way as far up the river as we could into Mount Aspiring National Park, stopping a few times for our pilot/guide to point out mountains and movie locations (we stopped at one point right where the Tower of Orthanc in Isengard was CGI'd into the Lord of the Rings movies).

This gave us a chance to ask all our burning questions about jet boats (how fast do they go? – 85 kph; how deep does the water need to be? – only a few centimeters to go fast; how long do the jet boat drivers have to train? – a hell of a lot of hours), and also a chance to break out the cameras for the stunning scenery.

Even on a cold and overcast day, there's no denying how stunningly beautiful this part of New Zealand is. No wonder it's part of the Te Wāhipounamu World Heritage Area.

A walk in the woods

Once we could go no further up the river, the jet boats turned around and back-tracked a few kilometers, going faster than ever to outrun incoming rain.

We were dropped off at the edge of the river to embark upon the next part of our Dart River Wilderness Safari: a walk through a native New Zealand beech forest. 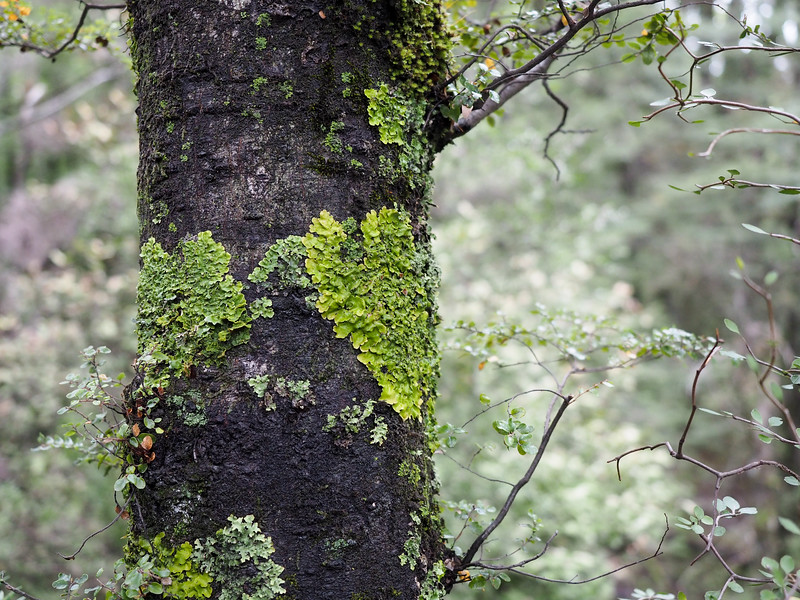 This walk was fairly gentle and only lasted about 30 minutes, but it was a nice change of scenery and also a fantastic way to learn a little more about New Zealand's flora. (And, you know, take some fun photos.)

A drive through Paradise

Our Wilderness Jet tour ended with a different form of transport: a bus kitted out with big 4×4 wheels that would take us to one of the most remote and beautiful corners of New Zealand. This place is very aptly named Paradise.

We made one stop on rural farm land, and our guide Robert pulled out a book that detailed all the different movies, TV shows, and even commercials that have utilized this little slice of New Zealand as a backdrop. Peter Jackson loves this place, and used it in both the Lord of the Rings and Hobbit trilogies.

We returned to Dart River Adventures' base just around lunch time, wind-whipped and cold, but also super happy. I would highly, highly recommend this half-day tour to anyone visiting New Zealand.

Where: You can get picked up in Queenstown, or meet in Glenorchy.

When: Tours run year-round, usually at 9 a.m. and 1 p.m. each day (with pick-ups happening roughly an hour before). Note, though, that jet boat tours are somewhat weather-dependent, and can be cancelled in the event of really bad weather.

How long: If you get picked up in Queenstown, expect the whole tour to take 5-6 hours; if you drive yourself to Glenorchy, it's closer to 4 hours.

Why *this* jet boat tour? It's true that the Wilderness Jet Safari is more expensive that other jet boat rides you can take in the Queenstown area. But most of the other jet boats offer shorter thrill rides; with Dart River Adventures, you'll have a half-day experience and see lots of incredible scenery. You also be in a jet boat for a much longer time!

Adds-ons: If you want to spend even MORE time in Mount Aspiring National Park, Dart River Adventures also offers a tour that includes canoeing in “Funyaks” along with the jet boat ride. Check out that tour here.

Is this a type of adventure tour you'd book in New Zealand? 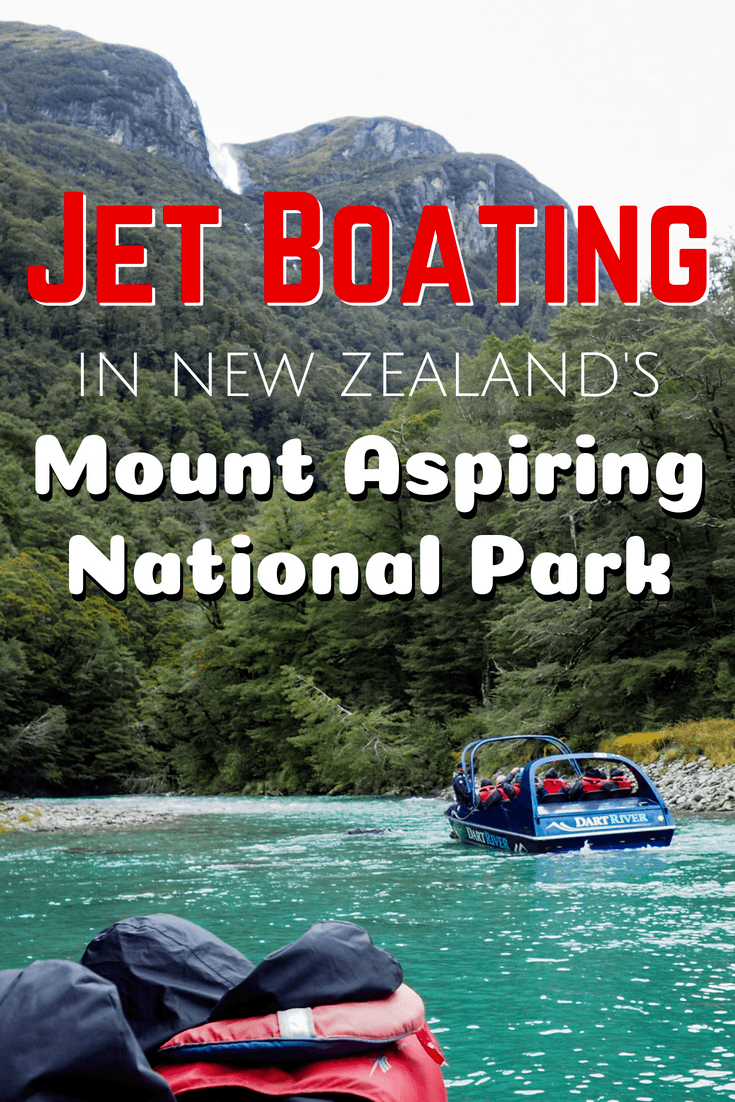