Behind the Scenes at the Colosseum

Home » Europe » Italy » Behind the Scenes at the Colosseum

In order to celebrate the completion of the Colosseum in the year 80 AD, the Romans celebrated with 100 days of “spectacles.” These weren't just warm fuzzy theater performances or talent shows, however. These spectacles were brutal and bloody and resulted in the deaths of roughly 20,000 animals and 10,000 gladiators. 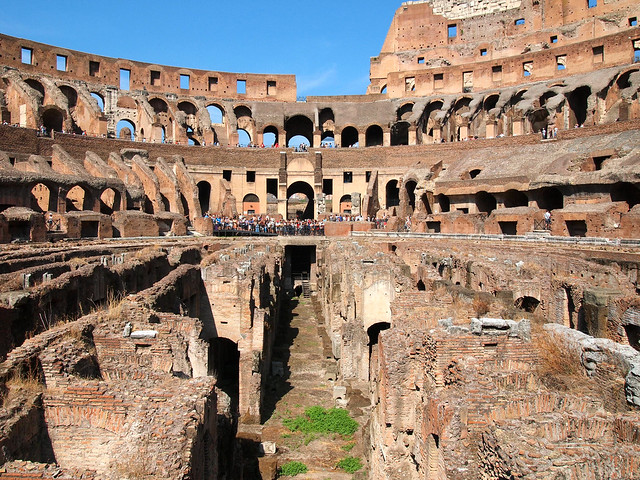 Today we visit old Roman amphitheaters because they're amazing works of architecture that have survived for centuries as the world has evolved around them. But rarely do we stop and think about what actually took place inside those arch-laden structures so many years ago.

Sure, we've all seen the Russell Crowe movie. Maybe his portrayal of gladiator Maximus is actually what inspired us to go and see the Colosseum in Rome in the first place. But it takes standing on the arena floor to make you realize what really went on here. 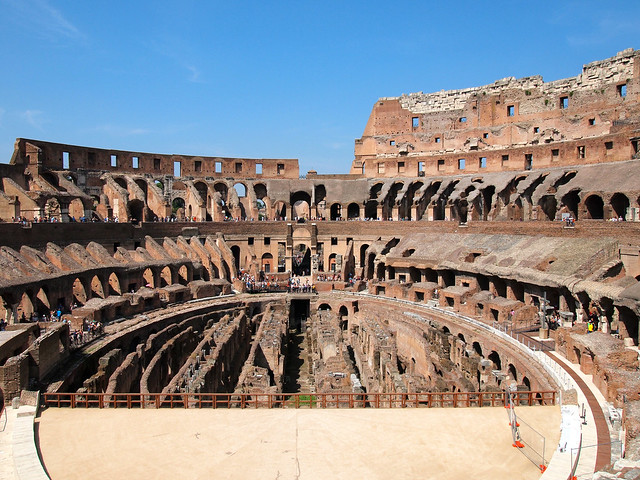 There's no arguing that the ancient Romans were geniuses. They built aqueducts and palaces and working sewer systems thousands of years ago. But they were brutal, sick bastards, too.

When the Colosseum was first built, it wasn't called “the Colosseum” at all — its real name was the Flavian Amphitheater. It had 72,000 seats (numbered/lettered just like in stadiums today) and was free of charge for all spectators. It had a complex system of elevators and pulleys beneath it to open trapdoors and unleash everything from lions to crocodiles on the fighting gladiators above. It even had a pipe system that could divert an underground river to flood the whole place for re-enactments of naval battles. There's no denying the genius at work there. 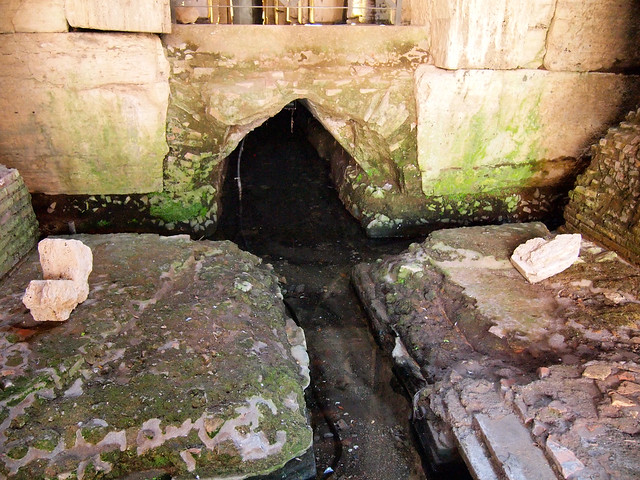 Genius. But also violence. For 500 years, battles raged inside the amphitheater for the pure purpose of entertainment. Today we watch movies and play video games with lots of blood and guts — but this was the real deal. If 10,000 people died in the Colosseum in the first 100 days that it was open, imagine how many met painful ends there over 5 centuries… 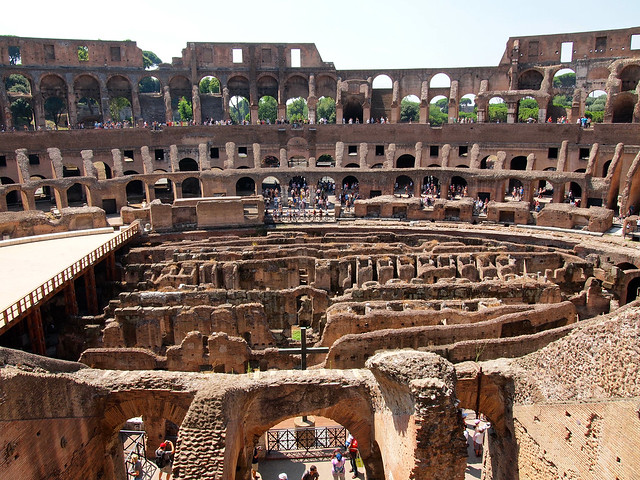 Going underground at the Colosseum

As I stood beneath the arena floor one hot August morning in Rome, a chill crept up my back despite the strong sun and rising temperature. My Walks of Italy guide, Camilla, was describing what the conditions would have been like in the hypogeum, this underground portion of the Colosseum, more than 1,000 years ago. Dark. Incredibly hot. Smelly. And full of the growls and snarls of all sorts of exotic and dangerous animals.

This was the realm of Roman slaves — who were even lower on the totem pole than the gladiators doomed to die.

The hypogeum was only just opened to visitors recently, and only a small portion of it, at that. Most of this underground level is crumbling, covered in moss, and bathed in shadows. 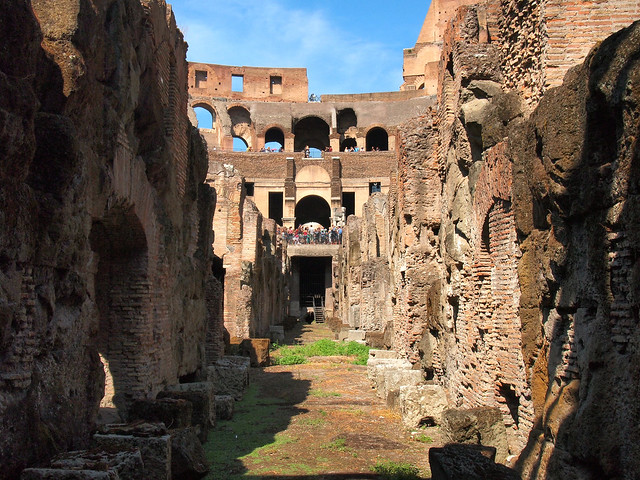 The fact that the Colosseum is still around for us to visit in this way is actually somewhat of a miracle. After being used for about 500 years, the Flavian Amphitheater was abandoned (along with the nearby Roman Forum) in the 7th century when Rome made the shift to Christianity. Structures like the temples in the Forum and the Colosseum had too many ties to Rome's pagan past to be of any use longer once the city swapped out their Roman deities for Jesus.

The Colosseum was soon after pillaged for building materials — in fact, it's estimated that 50% of the marble inside St. Peter's Basilica came from the Roman Forum and Colosseum. An earthquake further damaged the structure, and disuse and the centuries took their toll.

As the years passed and Rome's pagan past fell into obscurity, many names of things were forgotten. The Flavian Amphitheater simply became “the Colosseum” because of its proximity to the Colossus of Nero (an ancient bronze statue of Emperor Nero that was likely melted down, destroyed, or otherwise lost centuries ago).

But it actually may have been Christianity that saved the Colosseum from complete destruction. Rumor has it that, a few hundred years ago, one of the popes decided that the Colosseum deserved to be preserved since so many Christians had lost their lives (AKA been martyred) there. Since then, the structure has been protected, stabilized, and even restored.

Today, the Colosseum is one of the top tourist attractions in the world, seeing millions of visitors per year. 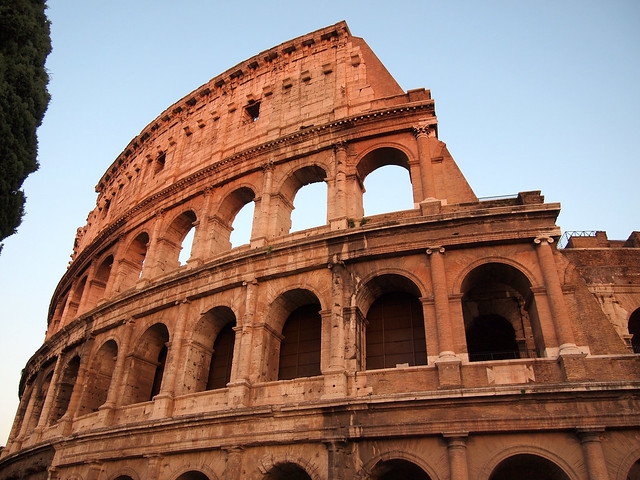 Despite this fact, the uneasy feeling that began down in the hypogeum followed me throughout the Colosseum — to the rebuilt arena floor, and all the way up to the highest surviving level of the Colosseum. As I looked out over the ruined-yet-still-imposing structure, I found myself suddenly hit with hundreds of years of bloodshed; of fear; of elation; of history. 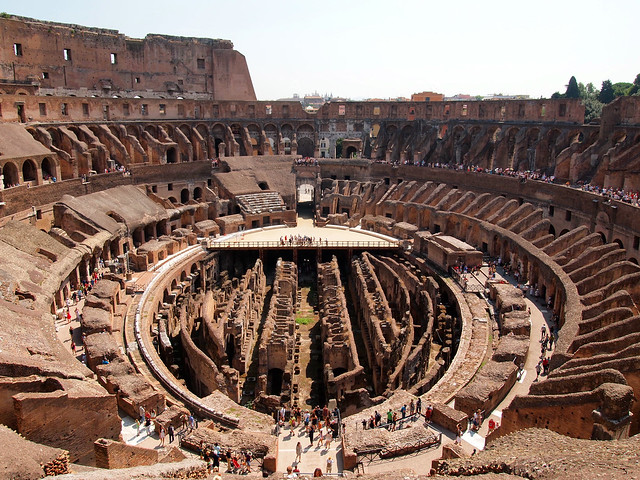 Seeing the Colosseum from the outside is one thing. But learning its secrets from the inside? It suddenly transforms it into something more than just an ancient structure that you once read about in a history book.

Want to see the Colosseum like this for yourself? Check out these tours with Walks: 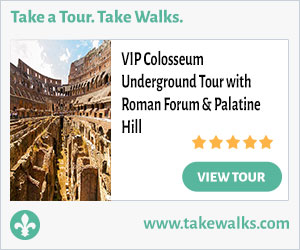 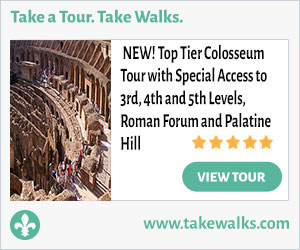 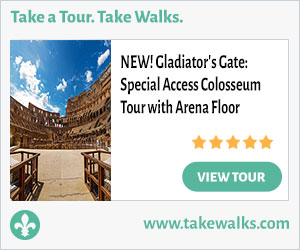 Would YOU want an inside glimpse into the Colosseum like this? 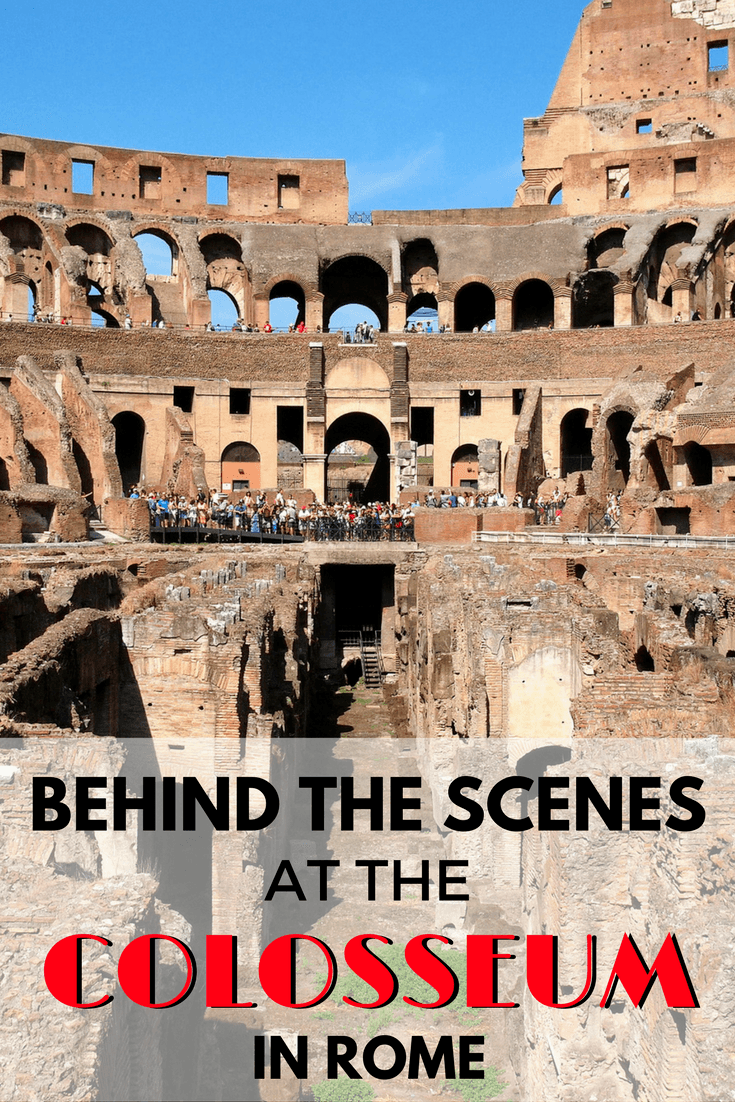 *Note: I received this behind-the-scenes glimpse into the Colosseum (as well as the Roman Forum and Palatine Hill) on a VIP Colosseum tour with Walks of Italy. As always, though, opinions and historical commentary are completely my own.

34 Comments on “Behind the Scenes at the Colosseum”