The last time I visited Christchurch, the city center was lively and bustling. The evening air was filled with the sounds of cars, buses, chatter, the clinks of pint glasses, and boot heels on pavement.

These days, however, the city is quiet. The main sounds come from jackhammers and the heavy machinery that is trying to put Christchurch back together — or at least tear parts of it down so that it can be rebuilt. 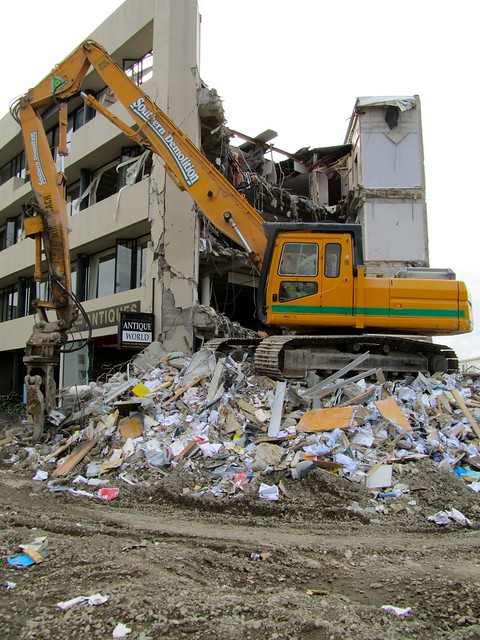 The city is “munted,” the locals say — ruined, messed up, destroyed, fucked; take your pick.

And, even now, three months after the February 22 earthquake that brought Christchurch to its knees, things are still in varying states of “munt” all around the city.

On some streets, there are few signs of any trouble. Life seems to be going on quite normally, and the only sign of damage might be a crack in the pavement or an uneven sidewalk; barely noticeable.

But then you round a corner to find a home with a wall missing or a church with its spire on the ground. And you are reminded. 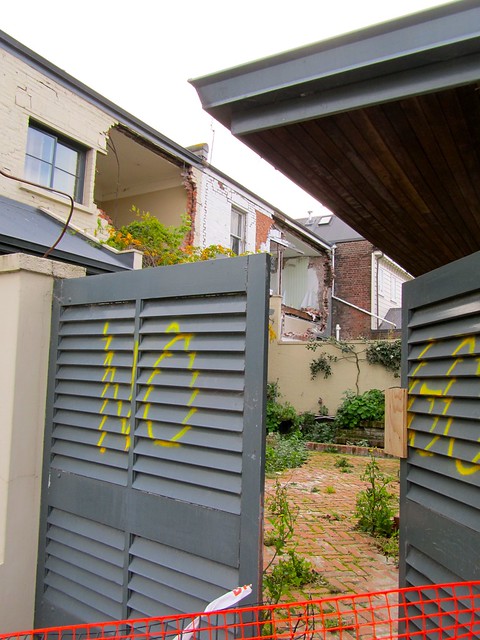 I'm not writing this post to try and dredge up bad memories for those people who lived through this disaster in Christchurch. I can't even imagine the fear and horror they must have went through on that day, and in the weeks and months since as aftershocks have continued to rattle both homes and nerves.

Instead, I'm writing this post to remind the rest of us that it's far from over. Just because the earthquake has made its way out of the media doesn't mean that its aftermath is over. In fact, the aftermath is really just beginning. It will likely be years before the city is back to normal. And, even then, it will be a new kind of “normal.” A post-quake normal that will never really be the same. Chirstchurch — and the people who call it home — will be forever changed.

There's always the fear, too, of more earthquakes. In fact, the night I arrived in Christchurch, I was awoken at 3 a.m. by a 5.3-magnitude temblor that shook the entire house I was staying in for 8 or 9 seconds. It was disorienting and scary, but luckily it didn't cause any further damage or injury in the city.

But these aftershocks — which are frequent — aren't over. The damage is still everywhere you look, whether it's cracks in walls, or cracks in the nerves of the people of Christchurch, who now often go to bed fully clothed with transistor radios near their heads, just in case they have to flee their homes in the middle of the night. 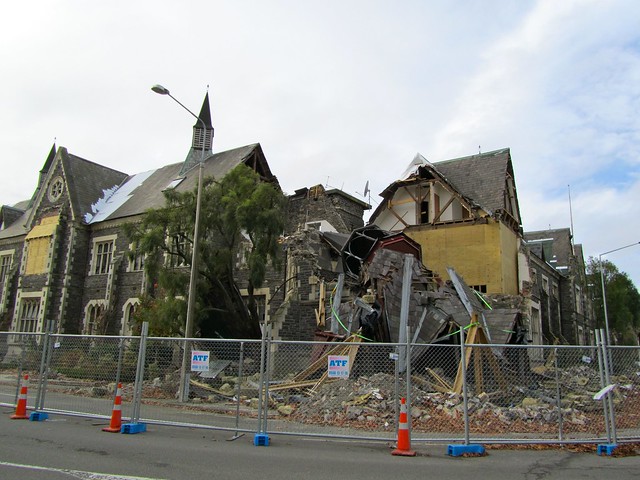 It's amazing to think that Mother Nature can cause so much damage in just 15 seconds. 15 seconds. That's how long the Feb. 22 earthquake lasted. And yet, three months later, scars from that 15 seconds still remain. It gives me goosebumps to think that lives can end and/or be forever changed in such a short amount of time. 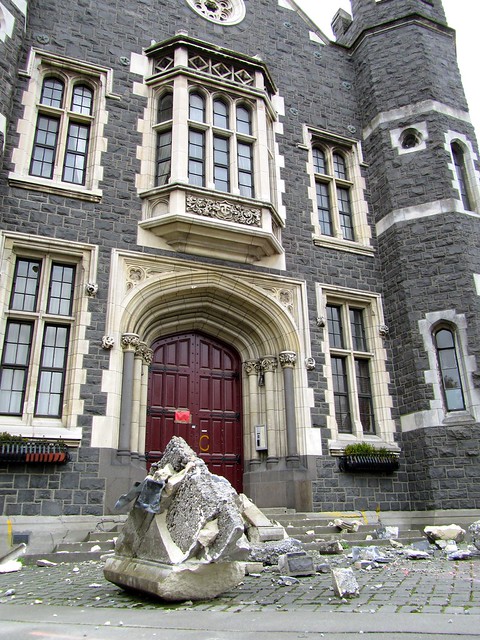 When I was in Christchurch, I talked to many people about their earthquake experiences. In fact, in the city, it's still the main topic of conversation.

I heard stories of people who were out of town when it happened and returned home not knowing what they would find. There were people who were in or around Cathedral Square at the time of the quake, who had to literally run for their lives through gooey liquefaction and crumbled pavement. There were others who risked their lives to help fellow survivors.

There are so many stories here. Even those lucky people who didn't lose anything (be it a home or a loved one) have compelling stories.

I met up with John on my last day in Christchurch, and he gave me a walking tour of the city — or, at least what's left of it.

This is a city he and his family still call home, and to say I was moved by his tour would be an understatement.

The physical damage, too, is still painfully apparent all over downtown Christchurch.

Some streets are still closed off, with rubble simply lying behind fences until crews figure out how to safely deal with the munted buildings. 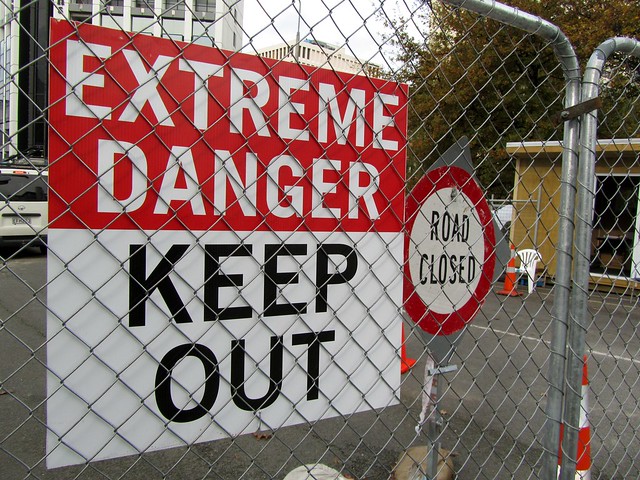 Many homes — beautiful, old homes — in the city center are abandoned, bearing red “No Go” stickers that mean they will have to be demolished.

Other buildings — historical ones that the city hopes to be able to save — are literally tied together with cables and propped up by steel beams. 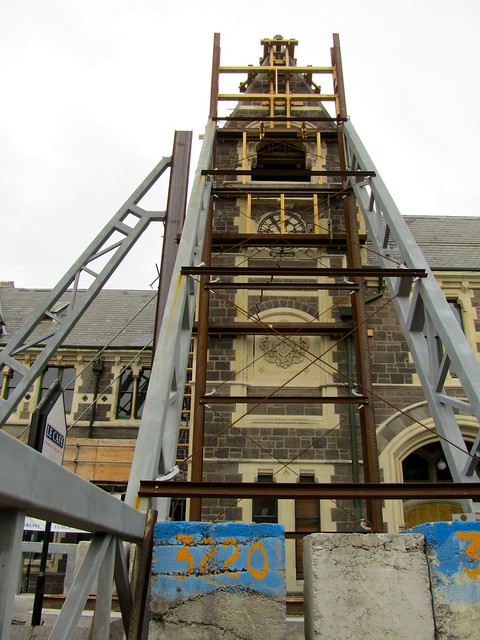 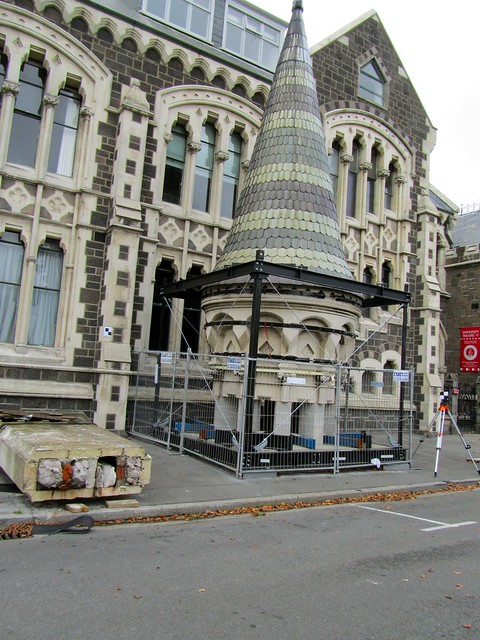 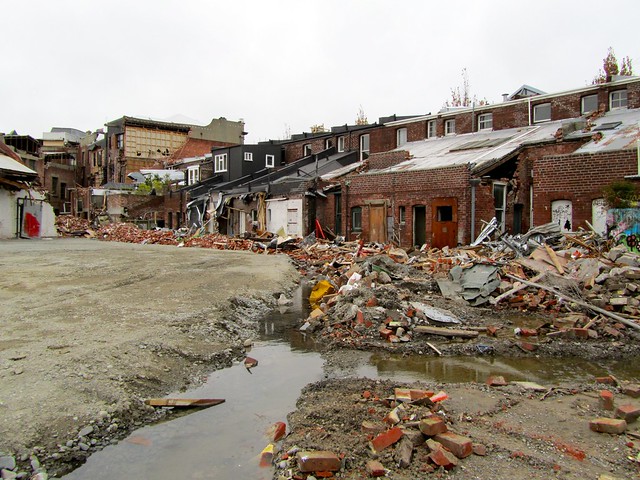 These are the parts of the city that cannot be saved. In these areas, everything will have to be torn down and slowly rebuilt. 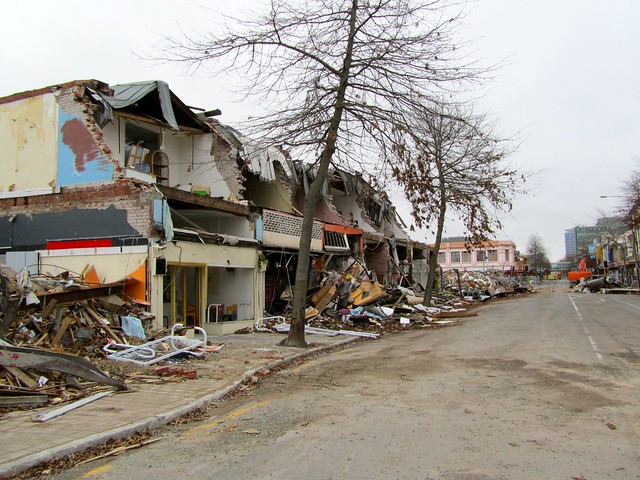 It was a very sobering and moving experience to walk around the quiet city with John, hearing the stories and thinking of how beautiful a city Christchurch was before Mother Nature had her way with it. 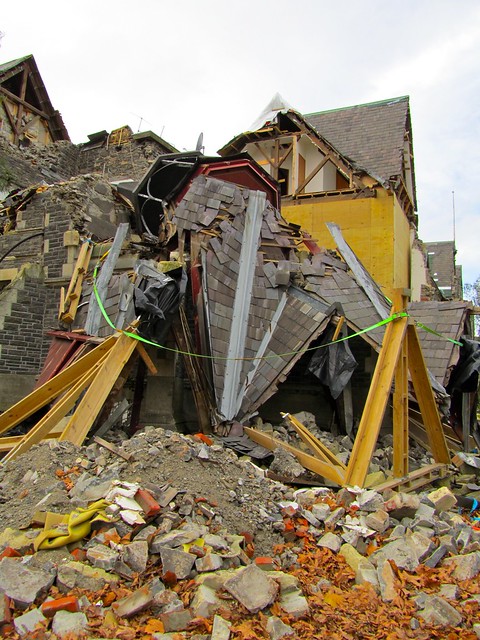 But, of course, with the bad also comes some good. Many people in Christchurch are now looking forward, to the opportunity that lies before them to rebuild their city. In many cases, they will be starting with a clean slate.

While people are still mourning for New Zealand's Garden City, many are also anxious to move forward. They are ready for a new, better Christchurch. And that's actually kind of exciting.

A fresh start for Christchurch

Right now in Christchurch, it's not just about mourning the losses or planning for the demolition and reconstruction. It's also about the opportunities and hopefulness that are beginning to seep into the consciousness of the locals.

Yes it's true that many historic buildings may have to be torn down. And it's true that Christchurch will never go back to the way it used to be. But, as so many locals said to me while I was there, with the bad often also comes some good. And this is the case in Christchurch.

Christchurch will certainly not be rebuilt overnight. But it WILL be rebuilt.

Already there are areas that have been cleared of rubble. That corner where a string of shops used to be? Empty. That 7-story building that crumbled to the ground? Cleared away. The work may be moving slowly, but it is moving. And the people of Christchurch are starting to become hopeful.

Here, essentially, is a chance for the people of Christchurch to take a terrible situation and turn it into a great opportunity to improve their city.

Yes, it's true that strong aftershocks still shake the city. But most residents are convinced that the worst is behind them. They are starting to replace the photos on the wall and the wine glasses in the cupboard. They are looking forward to the new Christchurch.

And, I must say, this attitude is inspiring to experience.

74 Comments on “Christchurch – A ‘Munted’ City”