You can’t go to Chicago without trying some of its famous deep dish pizza. It would be like a slight to the city. Like making rude gestures at it. Like a sin. In short, it would just be really bad.

So, when I first decided I was going to visit the Windy City, “eating deep dish pizza” immediately was put on my list of must-do things.

I asked around for suggestions on where to go, and I got a whole slew of answers. Chicago certainly has a lot of pizza options.

In the end, I decided to try out two of the places that seemed to come up the most in recommendations: Gino’s East and Giordano’s. Each has a long history in Chicago, and each is known for making a killer deep dish pizza.

Deep dish, in case you aren’t familiar, is not just a really thick pizza. It’s a really thick, inside-out pizza. I say inside-out because, unlike other types of pizza where it goes crust-sauce-cheese-toppings, deep dish pizza goes crust-toppings-cheese-sauce.

And it is delicious.

I ate at the original Gino’s East location on Superior Street, just off Michigan Avenue, in downtown Chicago. There was always a line out the door at this location whenever I saw it, and I ended up using a concierge business card from the John Hancock Observatory in order to skip the line and get priority seating (you can do this, too, if you visit the Observatory!). 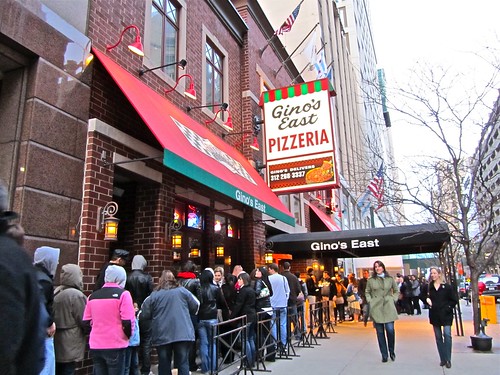 I wasn’t able to eat at one of Giordano’s downtown locations, but instead popped into its restaurant near the Chicago-Midway airport, where there was no line or wait for a table. 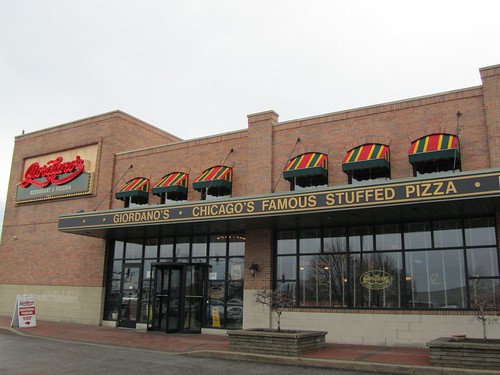 I can’t really compare things like time spent standing in line or service since I didn’t eat at two downtown locations, but I CAN compare the pizza for you.

So here we go.

Both Gino’s and Giordano’s serve deep dish and thin-crust pizza, along with an assortment of pasta, calzones, sandwiches and salads. (Though Giordano’s calls its deep dish pizza “stuffed pizza.”) Why you would go to either of these places and order anything but pizza is beyond me, but the option is there for you.

And, although they don’t advertise it or include it on the menu, Gino’s also serves gluten-free pizza. I didn’t try it, but my friend Katie said it was good.

Smackdown winner: Draw, because both menus offer up a variety of things.

I can’t speak to any locations except the ones that I actually ate at, of course.

Gino’s East on Superior had a really lively atmosphere, but wasn’t super loud. Inside Gino’s, guests can write on the walls, chairs, staircases, you name it, so it was fun to look around. The building also has somewhat of an “underground” feel to it, even though it’s 3 stories high. This is probably due to the fact that it didn’t seem to have many windows, and is painted in fairly dark colors.

The Giordano’s I ate at was nothing special — it was your average pizza joint with lots of old pictures from Chicago lining the walls, and white-and-red checkered tablecloths.

Smackdown winner: Gino’s, because the writing on the wall says so.

At Giordano’s, you can expect to wait roughly 35 minutes for one of their stuffed pizzas.

Smackdown winner: Giordano’s, though not by much.

At Gino’s, I split a medium, 6-slice pepperoni pizza with two other people. The total cost of the pizza was $23.20. A small (4-slice) pepperoni pizza would have been $17.70, and a large (8-slice) pizza with one topping would have set us back $27.45. Prices are generally based on how many toppings you want inside your pizza.

Smackdown winner: Giordano’s, because you seem to get more pizza for the price you pay.

The crust is my absolute favorite part of any pizza. I like it to be crunchy and seasoned well. I know not everyone is a crust fan, but if you are, listen up.

Gino’s pizza is made with a “golden crust” that almost tastes like it has cornmeal in it. It was amazing. I could have eaten this crust and nothing else for days — it was that good. It was crunchy but not too hard, and had a really good flavor without overpowering the rest of the pizza or being really greasy.

Giordano’s crust wasn’t anything special. It was crisp and tasted fine, but it paled in comparison to Gino’s as far as I was concerned.

Smackdown winner: Gino’s, because of that tasty cornmeal crust.

When it comes to sauce, I didn’t really have a preference. Both use a chunky tomato sauce that’s neither too sweet nor too acidic. In fact, I thought they were both pretty tasty.

Smackdown winner: Draw, because I thought they were both good.

While both places offered up a wide variety of toppings to put inside your pizza, I went with just pepperoni on both occasions.

Gino’s pizza was a nice balance of topping, cheese and sauce. I didn’t feel like any element dominated over the others.

Giordano’s pizza is fabulous if you love cheese. Their stuffed pizzas certainly ARE stuffed – with gooey, not-too-greasy cheese. I like extra cheese on my pizza, but this would not be the right pizza for someone who doesn’t.

Smackdown winner: Gino’s, because I’m all about balance.

When it comes down to it, I much preferred Gino’s East. Yes, you could pay less and not have to wait as long for stuffed pizza at Giordano’s, but the deep dish at Gino’s is worth it in my opinion.

Taste-wise, Gino’s wins, hands-down for me.

Plus, the atmosphere of Gino’s East was fun. Who doesn’t love a place where you can write on the walls? 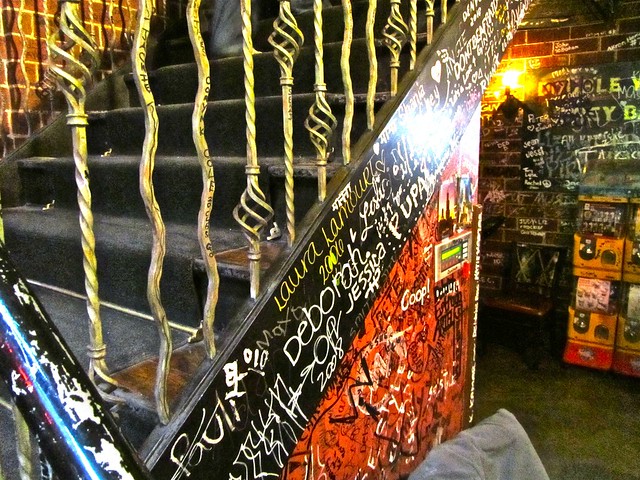 Since originally writing this post, I went on a Chicago Pizza Tour and tried deep dish at a couple other spots, too, like Pizano's and Pequod's. All I can say is Chicago is an AWESOME pizza city!

Have you eaten at either of these Chicago pizza joints, or perhaps others I didn’t get a chance to try? Which serves up YOUR favorite deep dish pizza?