The weather was not good.

In fact, the forecast – filled with wind and snow and fast-moving clouds – was so poor that I fully expected our Northern Lights tour to be canceled altogether. After all, you need clear conditions to see the dancing lights, and the forecast was anything but clear.

But when Marie and I turned up at the meeting point near Tromsø's waterfront, the tour buses were still there, ready to carry eager aurora-viewers off into the inclement night.

It took an hour to get out to Tromsø Friluftsenter's base camp. We watched a video about the history and science behind the Northern Lights, and I surreptitiously re-checked the weather forecast. When we got to the base, the wind was whipping and snow was blowing sideways into our faces as we made our way into the large lavvo tent.

Our guide, Trine, assured us not to worry. But I'm pretty sure none of us was expecting a Lights show that night.

But that aurora… she's a tricky lady.

A couple hours later, we were all outside the lavvo jumping up and down and yelling “OH MY GOD” over and over as the Northern Lights danced across the sky above our heads in a spectacular light show of green and purple.

It just goes to show that nothing is guaranteed when it comes to the aurora borealis – and that every Northern Lights-chasing experience is almost guaranteed to be different.

My first brush with the Northern Lights in Northern Norway came, perhaps aptly, in the city of Alta.

Located roughly 300 miles north of the Arctic circle, Alta is a small city with some big nature. The Northern Lights blaze here on far more nights than they're quiet, and even though Alta is on a fjord, it often has fairly dry and mild weather – perfect for spotting the aurora.

Except, of course, when Marie and I were there.

My track record with the Northern Lights is a bit rocky. I saw them twice in northern Manitoba in 2013, but failed to get even a glimpse on two separate winter trips to Iceland. I knew that we were in the right place to spot the Lights in Northern Norway, but the weather and aurora forecast had to cooperate, too.

Our tour in Alta was operated by Pæskatun, which offers both Northern Lights and special slate tours (Alta is also known for its quality slate production, and Pæskatun owner Trond Håvard Strifeldt has been mining slate since he was 16). We headed out of the small city and up into the mountains to Pæskatun's main camp, where Trond checked weather forecasts and served us hot drinks in a cozy cabin.

Like most Northern Lights operators, Trond will sometimes take guests out into the Norway wild to chase the aurora if the forecast looks better somewhere else. But on this night, strong winds and fast-moving clouds lead him to tell us we should probably just stay put. Marie and I were fine with this, since neither one of us really wanted to get stranded on some far-away mountain pass.

The aurora forecast for the night was low – only a 1 or 2 on a scale of 9 – and Trond spent some time showing us how to read some of the forecast and reporting charts that he pulled up on his laptop. He also helped us set up our cameras, and lit a fire in the traditional Sami lavvo next to the cabin (because if we couldn't see the Lights, at least we could have fun with some night photography).

The Lights DID end up making an appearance, though. About an hour after we arrived at base camp, the sky directly above us began to clear. And then, verrrrry faintly, the aurora borealis began to reach out tendrils of barely-green light. 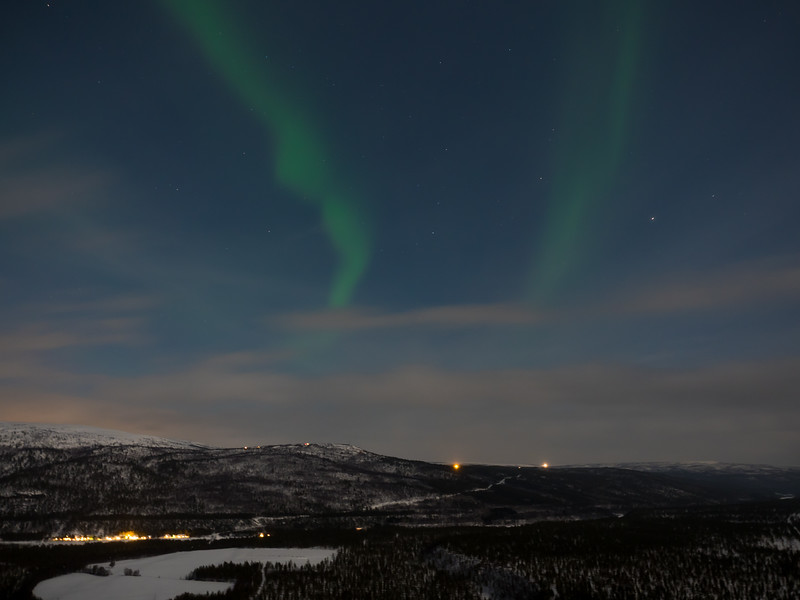 The strength of the aurora – which appears when particles blasted into space by the sun collide with elements in Earth's atmosphere – varies based on a lot of factors. It often starts out weak and gets stronger as the night wears on, but other times it's barely visible to the naked eye. Sometimes, it simply doesn't shine at all.

On this night, the aurora was weak. It was tough to tell whether that wisp above your head was just a cloud, or weather it was a band of Northern Lights. Most of the time, the only way to tell was to take a photo, since the colors of the aurora are captured much more clearly in a long-exposure photo. 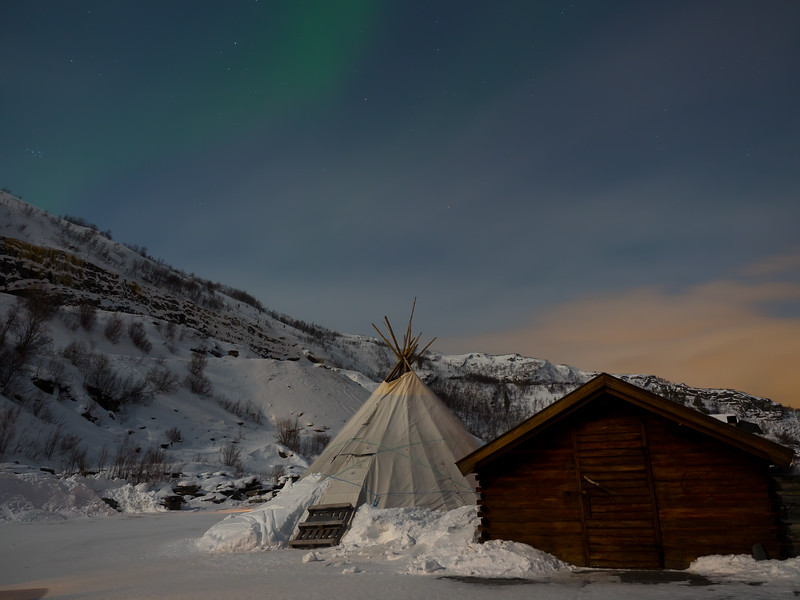 But, considering we hadn't expected to see anything on this trip, those little wisps of green made us really happy. It helped, too, that Trond was so excited on our behalf, bouncing around the camp and exclaiming every time the Lights would show up in one of his own photos.

If you're going to book a Northern Lights tour in Alta, this one gets a thumbs-up from me.

The Lights dance in Tromsø

I already started telling this story at the beginning of this post – the stormy night with a poor forecast that ended up culminating in the best aurora show I've seen yet.

Everything started out windy – so windy that I almost didn't go outside at the first sign of the Lights for fear that my tripod would just simply blow over. But I knew I would regret it if I didn't, and so I grabbed my gear, made sure my earmuffs were on securely, and left the calm of the Tromsø Friluftsenter lavvo for the chaos outside.

It started out slowly – first just a single band of green stretching across the sky. The moon was close to full, which sometimes is thought to be a bad thing for aurora photos since you generally want the sky to be as dark as possible. But I actually thought the moonlight made the Lights look even more otherworldly.

The clouds soon came back in, obstructing moon and aurora alike, so we all went back inside to warm up and roast some marshmallows over the fire. But before long the sky was clearing once more and a shout from outside the lavvo told us that the aurora was nowhere near done with her show.

The sky went from completely cloudy to blazing with green light (green light that you could clearly SEE with the naked eye) in a matter of minutes.

The display took my breath away and literally brought tears to my eyes. And the more the clouds cleared, the faster the Lights began to dance. It was almost as though they knew this was their best chance to put on a real show for us.

At one point, there were three or four different curtains of light moving in different directions across the sky, criss-crossing and merging and dancing off again. I would be taking a photo in one direction and gazing, slack-jawed, in another. Amidst my near-crying, I remember yelling “I need more eyes!” because the Lights were moving so fast in so many different directions.

The photos, of course, do the actual spectacle little justice. 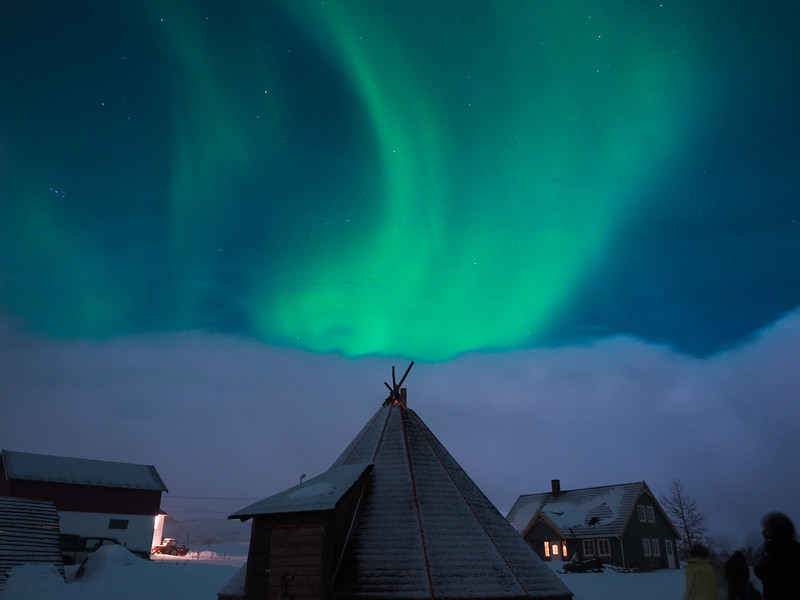 And then, just as quickly as it had begun, the show was over. The aurora disappeared. The clouds rolled back in. And the 14 of us went back inside the lavvo with grins plastered on our faces.

The show at Tromsø Frluftsenter's base camp was so incredible (and so unexpected) that I would have been happy to have that be my last brush with the aurora in Norway.

But we had one more Northern Lights tour booked.

Again, the weather wasn't great. But our guide – Guide Gunnar from Tromsø – is known for taking small groups of Lights-chasers hours out into the wilderness in order to find clear skies. This guy will take you all the way to Finland if he needs to.

Thankfully, there was a valley with relatively clear skies only an hour away from Tromsø, up in the Lyngen Alps. We made one stop when Gunnar spotted the aurora hovering over a nearby mountain, and eventually moved to an even more remote spot where we parked on the side of the road and built a bonfire in the snow. 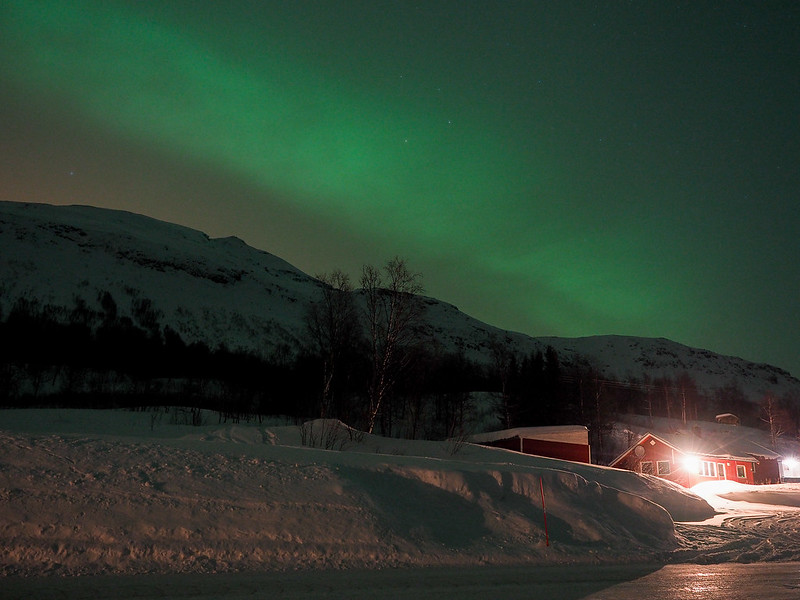 Over cups of hot berry juice and tiny sandwiches of Brunost cheese, our small group swapped travel stories, sidled up to the fire (it was the coldest night by far during my time in Norway), and waited to see if the Northern Lights would grace us with another show.

In the end, we DID get one more glimpse of the aurora – one more fleeting hint of green on the horizon before deciding to call it a night just before midnight. 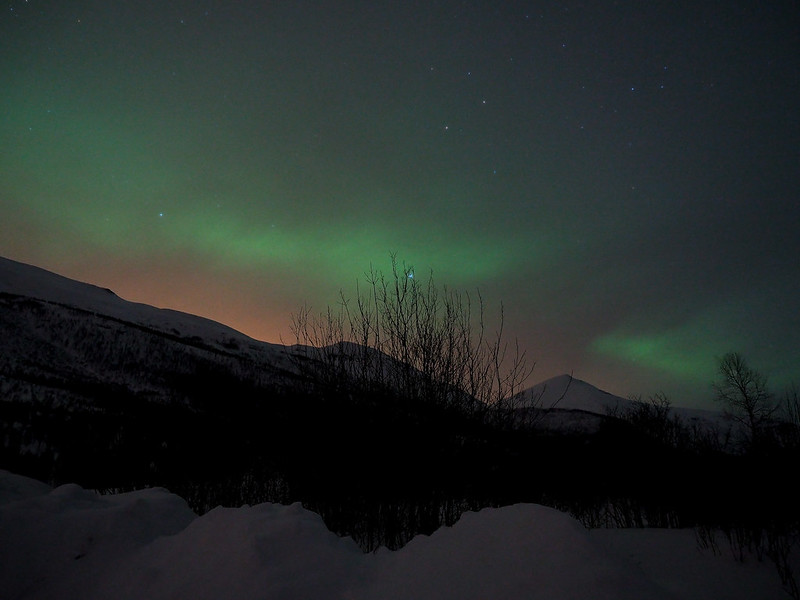 Again, it was a reminder than no two aurora-chasing trips are the same.

And yet, every glimpse of the Northern Lights feels like pure magic.

I can highly recommend all three of the Northern Lights tours mentioned in this post. All three are designed for small groups (no charter buses here), and all are focused on actual “chasing” – i.e. driving further away for clearer skies if necessary. They all also include hot drinks and snacks, warm weather gear if you need it, and usually a fire to gather around.

In Tromsø, both GuideGunnar's Aurora Chase and Tromsø Friluftsenter's Northern Lights Chase are great options and worth the price.

In order to capture the Northern Lights in a photo, you really need to have some special equipment with you. Such as:

READ NEXT: How to Photograph the Northern Lights

Who is ready to book a trip to Northern Norway to see the Northern Lights? 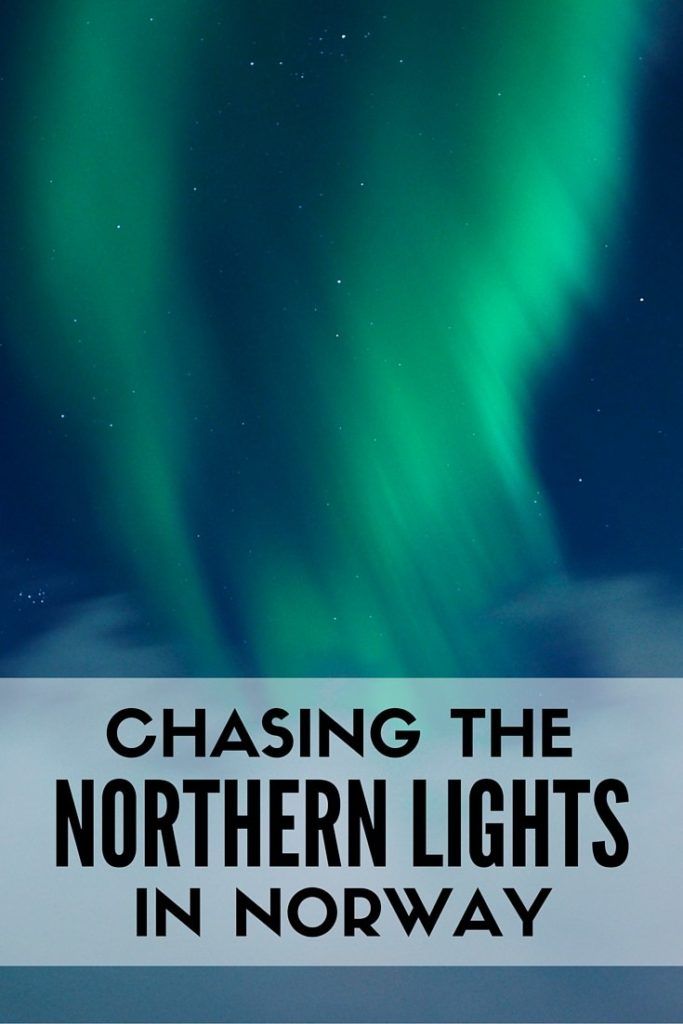 *Note: I was a guest of Innovation Norway and Northern Norway on this trip, and also have to thank all the local tour operators we worked with. As always, though, all opinions are 100% my own.

46 Comments on “Chasing the Northern Lights in Arctic Norway”