The Berlin Wall: Then and Now

Home » Europe » Germany » The Berlin Wall: Then and Now

It doesn't matter which country you come from or how old you are. Chances are that you are at least aware that something called “The Berlin Wall” once existed.

I can't say I remember much personally about the Wall years — it fell when I was only 3, after all. But I remember learning about it and the Cold War era briefly in middle school history classes, and then again in my high school German classes. It always confused and fascinated me in equal amounts — the idea that a wall could completely divide a city and a people that for decades had been unified under one flag.

But of course the Berlin Wall was much more than just a wall. 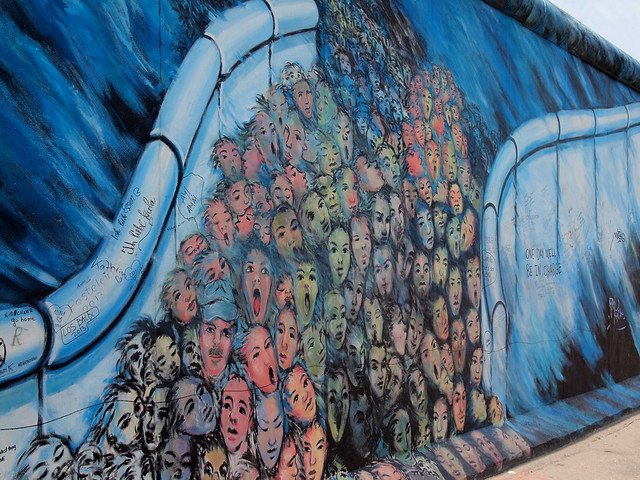 It was a political, social, and emotional symbol; the physical representation of opinions, fears, and tensions that are very hard to understand or make sense of, especially from the outside looking in.

It took a visit to Berlin to truly appreciate what The Wall was, what it represented, and how it affected the lives of people living in Berlin. 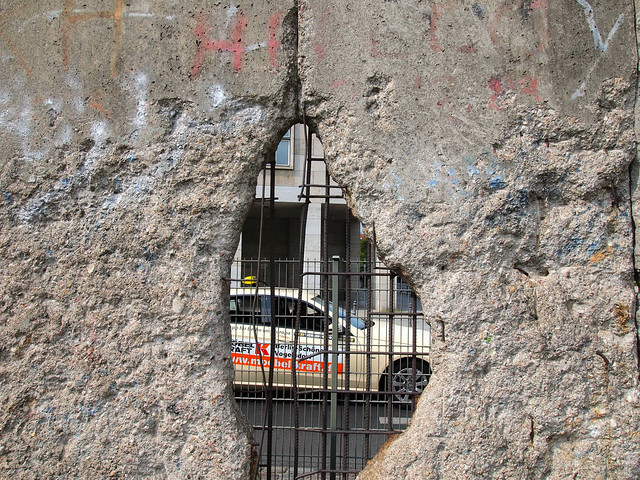 THEN: The year is 1961 and, essentially overnight, the first version of the Berlin Wall goes up — just piles of rubble and barbed wire to close off the border between East and West Germany. The Wall is actually put up around West Berlin, cutting off that sector from East Berlin and surrounding East Germany. The reasoning? To keep socialism from seeping into the East Bloc, according to the Soviets. Eventually the wall would be built of concrete slabs 12 feet high, lined with watch towers and armed guards.

NOW: Today, 24 years after the fall of the Wall and 23 years after the reunification of East and West Germany, signs of the separation can still be seen. A double line of bricks mark the path of the former Wall all across Berlin, and you can tell which part you're in based on the little red and green men who help you cross the street at stoplights — the East Berlin ones look like little Soviet men in hats. 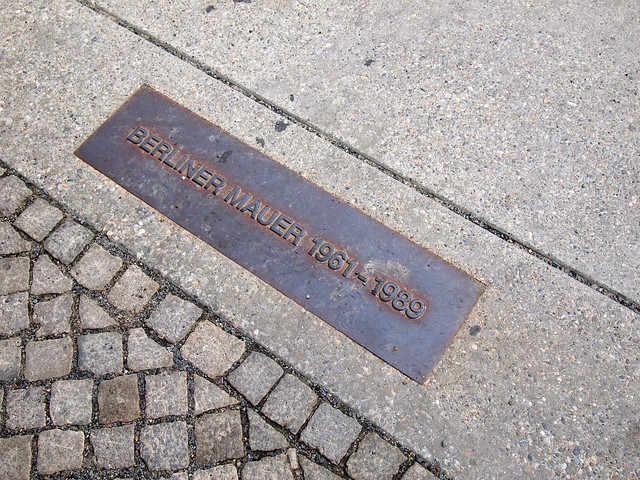 THEN: The Berlin Wall separated families; lovers; friends. A few years after the Wall went up, travel out of East Berlin (and out of East Germany, really) was virtually impossible. The conditions were, by all accounts, horrible in East Germany, and, under Soviet rule, Germans were desperate to escape. Between 1961 and 1989, it is estimated that about 5,000 people tried to escape over, under, or through the wall. Around 600 of them lost their lives.

NOW: Today, travel through Germany — and, in fact, all throughout Europe — is unhindered. You can learn all about the escape attempts though at the Checkpoint Charlie Museum. Some of them are just remarkable. There are stories of homemade uniforms that took years to piece together, secret compartments built into cars, underground tunnels dug by hand, and even an escape attempt involving a hot air balloon! 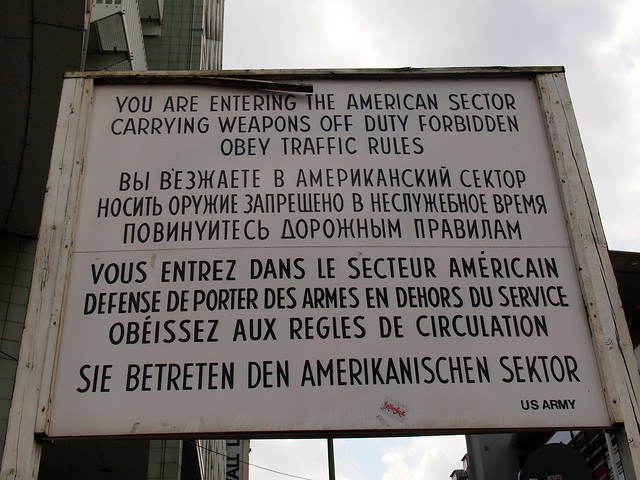 THEN: The Brandenburg Gate was essentially built INTO the Berlin Wall. Before the Cold War Era, the Gate had been a symbol of power in Berlin — every invading army (including Hitler's Nazis) marched through the Brandenburg Gate to symbolize their seizure of the city. When it was built into the Wall, the city's powerful symbol was trapped, too.

NOW: Today, the Gate is a symbol of freedom; the symbol of Berlin, if Berlin in fact has one. When the Wall came down, it was at the Brandenburg Gate that people crowded and attacked the concrete with hammers and their bare hands. All the newsreels, all the famous photos, all the postcards of the Berlin Wall coming down feature the Brandenburg Gate. 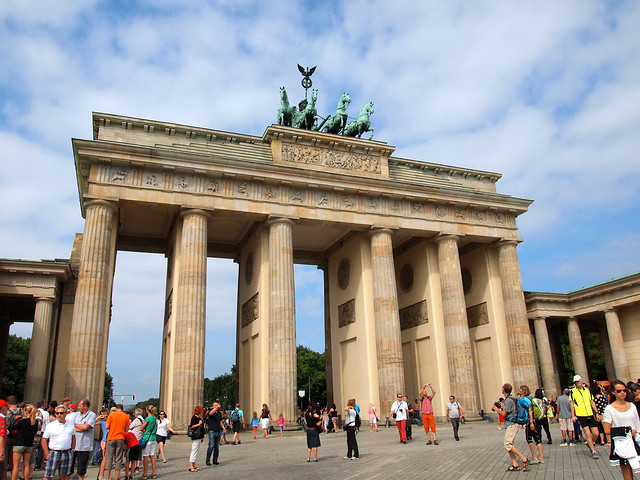 THEN: The Wall itself was a symbol; daunting and impenetrable.

NOW: The parts of the Wall that remain standing in Berlin are still symbolic — just for a different reason. The largest section of the Wall that still stands is today known as the East Side Gallery. It's covered in murals painted by international artists with political messages of hope and freedom. 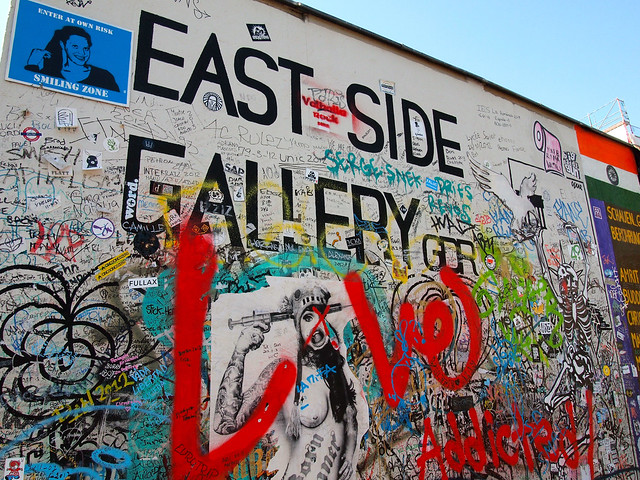 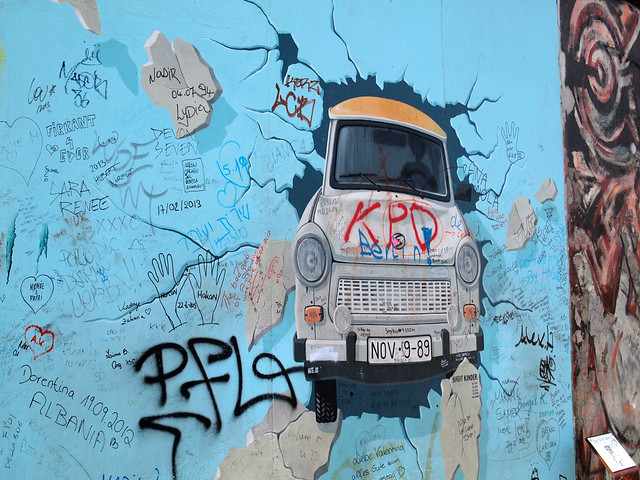 I've said it before, but I'll say it again — Berlin is a fascinating city. And part of what makes it so fascinating is the fact that its history is so recent. Most true Berliners (if they didn't flee the city once the Wall came down and East Berlin was finally free), have memories of the Cold War era; they remember when the Wall was a real fixture in their everyday lives.

There are pieces of the Wall still left all over the city — all over the world, in fact (I personally have seen sections in Maine and Washington D.C., for example). And where the Wall has been destroyed in Berlin, there are still reminders. Constant reminders of the past. 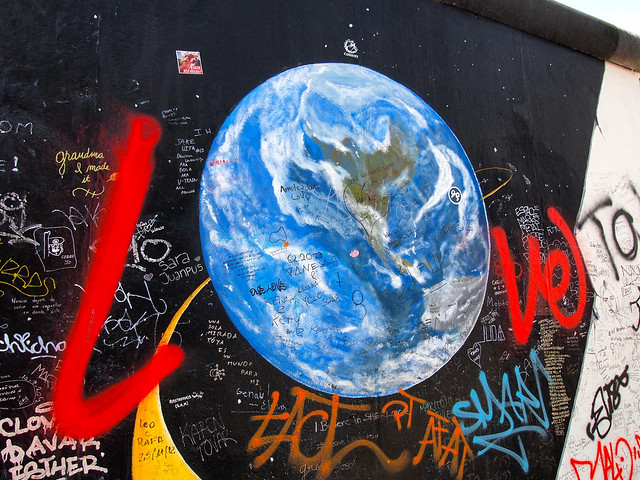 It's a theme in Berlin, to remember the past alongside the present. I haven't decided if it's a particularly good thing, but it's there regardless of what I think. At the very least, it makes you think. It makes you think about what it must have been like to grow up in a divided city. To have your family split up or relationships end because of some concrete that was slapped together to serve a political agenda.

I can't imagine it.

But, then again, I can't imagine people living through many of the things that they have lived through. Learning more about the Berlin Wall in Berlin helped me learn more about the city and its people; it helped me be able to understand what they've gone through and empathize with them more.

And, at the end of the day, that's what traveling is all about.

Is the Berlin Wall something YOU would like to learn more about?

*Note: I visited Berlin as part of my Busabout trip around Europe. They provided me with transport on all 3 of their Europe loops, but all opinions of the destinations I visit are entirely my own!

22 Comments on “The Berlin Wall: Then and Now”